When I was a kid, my parents would often take me and my sister out “twitching,” a weird word for bird watching made weirder by the emergence of the streaming platform. When we travelled, they would take heavy reference books showing off every species that occurred in the area, and tick them off as we saw them, tallying them up at night to add to a running total that usually reached the hundreds.

I didn’t think this habit had rubbed off on me until I started playing Far Cry: New Dawn.

The latest entry in the absurd shooter series has hummingbirds fluttering around collectable plants, and at first I was charmed because they simply don’t do anything. Though I typically spend the first few hours in a new game with a photo mode getting distracted by taking wildlife snaps, that wildlife does usually contribute to some kind of mechanic. In Far Cry, you can hunt deer and get hunted in turn by bears and the like, and sell the furs you get by killing them. You can even shoot the rats. But as far as I can tell, the hummingbirds are just set decoration, there to make an already photogenic world just that little bit more interesting.

And yet there are so many types! I first saw the one up in the header multiple times and it’s a pretty classic blue sheen that you might expect from a game dedicated to colour in the way New Dawn is, so nothing seemed out of place.

But then I found this. 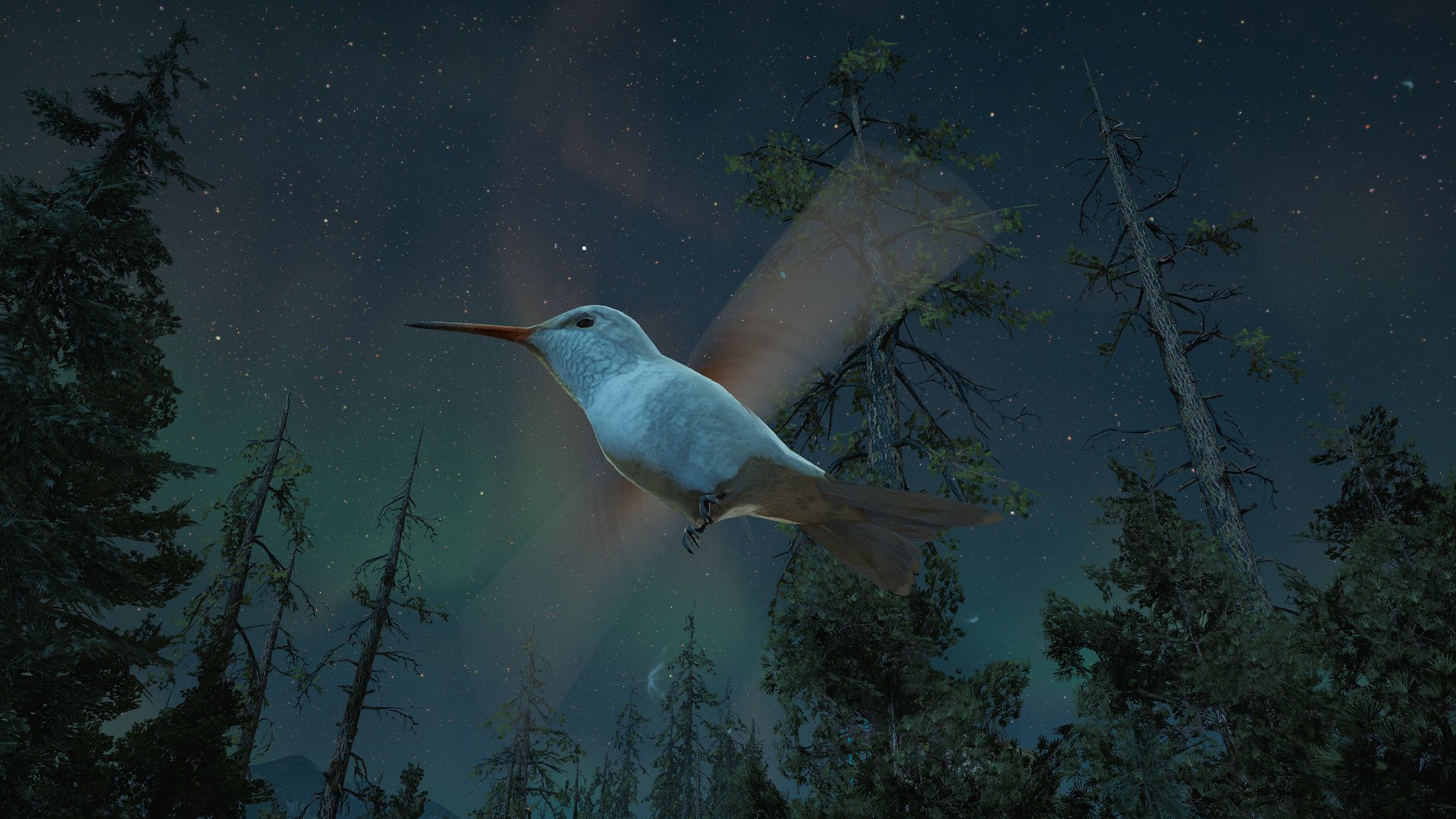 Thanks to the nighttime photo, it does sort of look like the ghost of a hummingbird, but I figured it was probably supposed to be a female, more boring than the colourful male in the way that many bird species are. But there were more recolours, too. 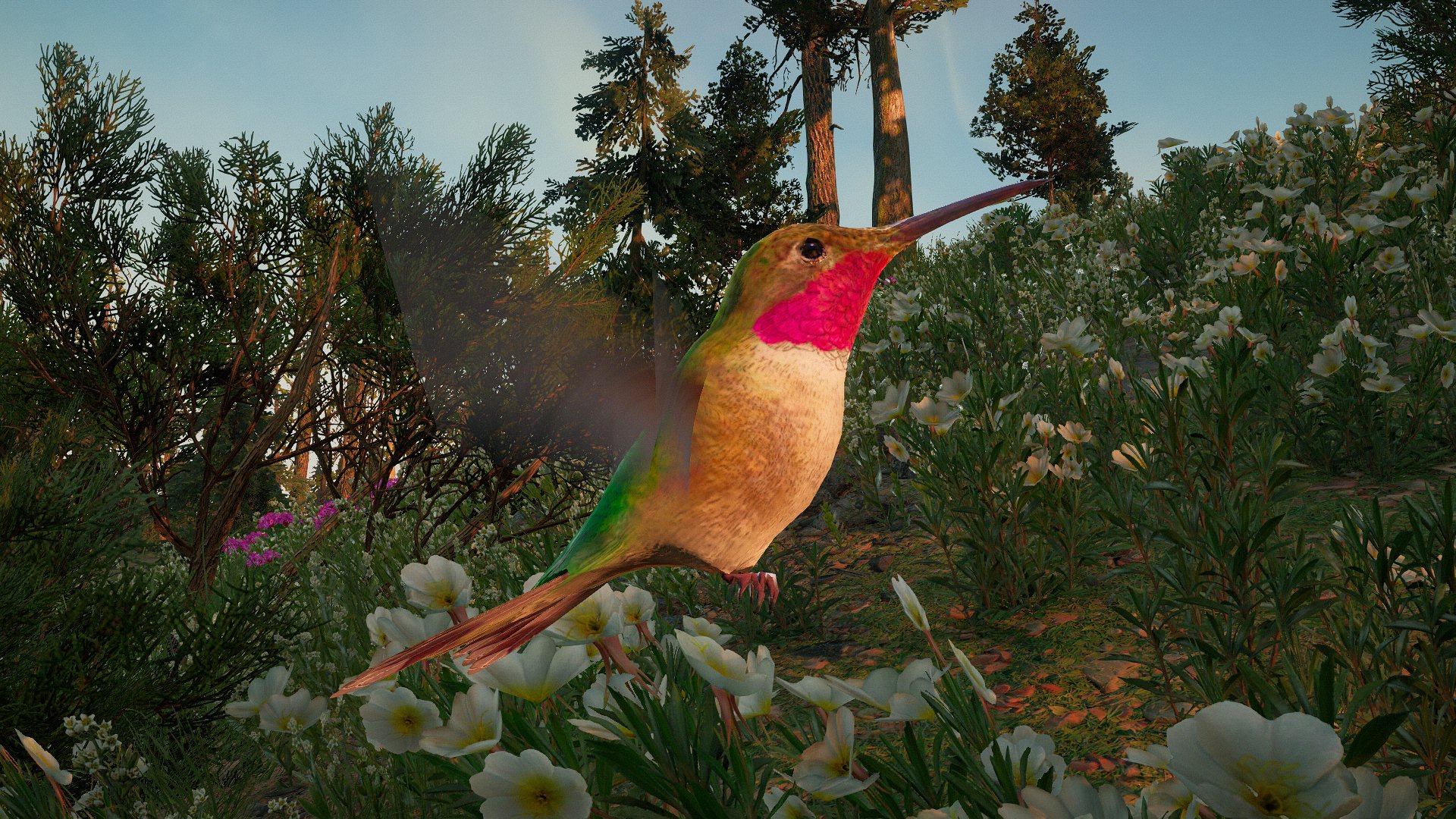 This one is so specific that I looked it up, and it tracks pretty well with the real-life Broad-tailed hummingbird. It doesn't usually reach so far north as Montana, but hey, the apocalypse apparently did some interesting things to the climate.

It turns out that there are so many different hummingbird models in Far Cry: New Dawn that at first I thought they might be randomly generated. For example, there isn't, as far as I can tell, any real example that is so solidly red as this friend, so it could have been an algorithmic quirk. 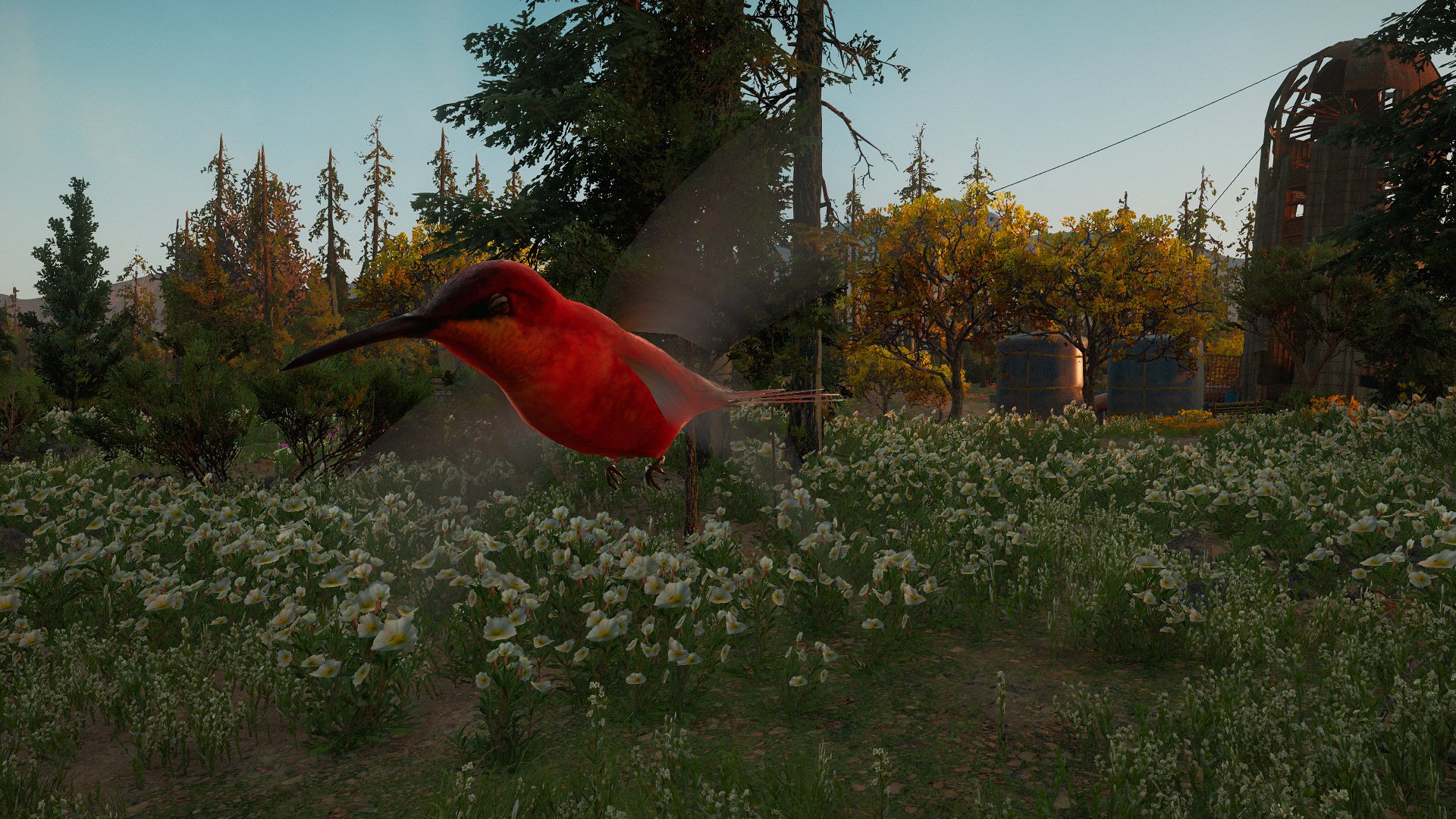 But now I've seen enough repeats that I think there's just one or more very dedicated asset designers at Ubisoft who got as into this as I did. I mean, look at the colours on this one. 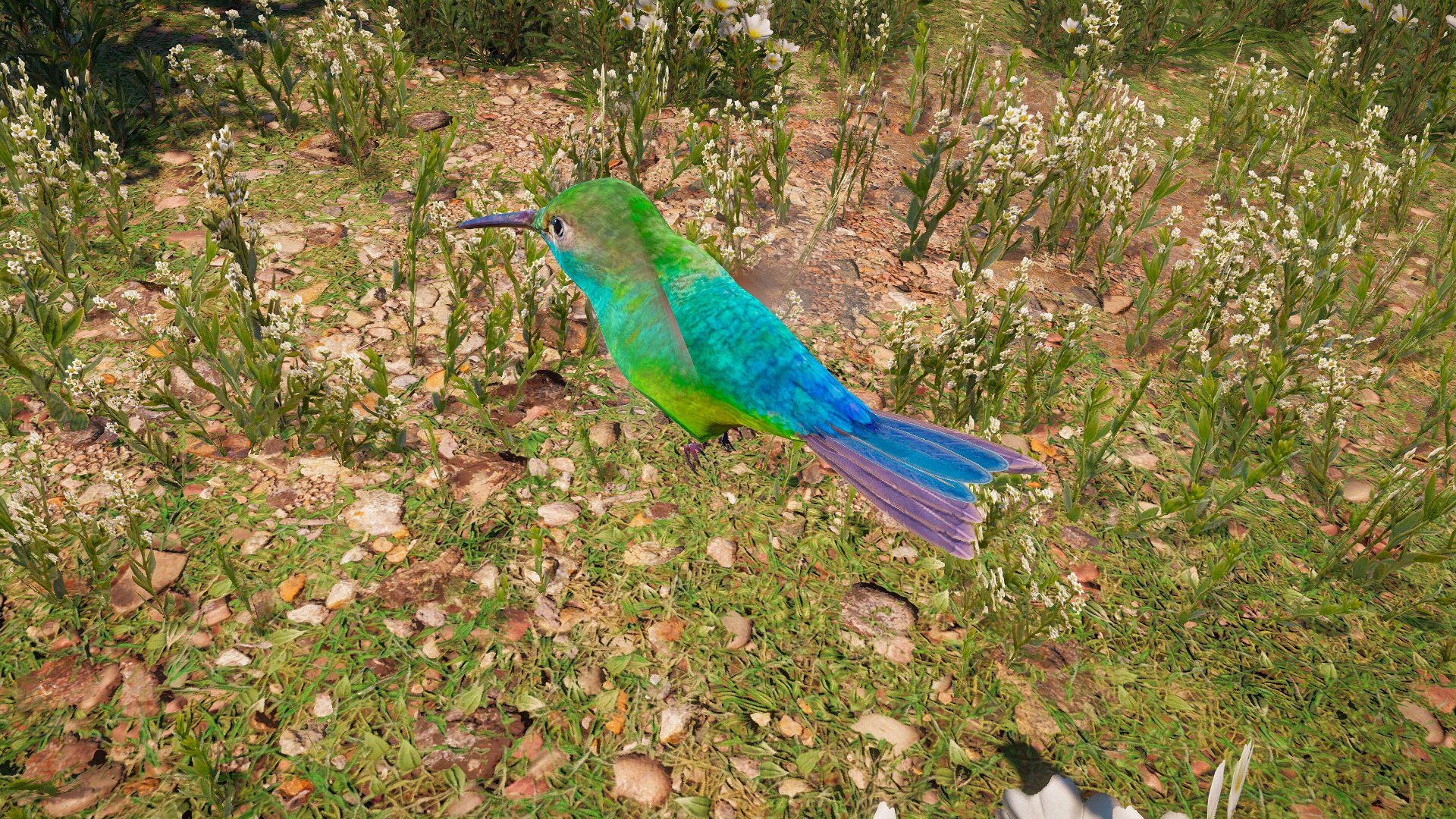 Lest you think I am exaggerating how cool I find this for effect, here is an embarassing anecdote: last year I visited Blizzard's Irvine offices, home of the very famous orc statue. It has its own page on their website where they say "a billion" photos have been taken of it, and sure enough the other two journalists that I was with started getting out their cameras while we were waiting for our tour.

I am one of the very few visitors who does not have their own picture, though, because I got distracted by - what else? - a hummingbird in the flowerbeds a few metres away. After a while our PR handler came to find me like a small child who had wandered off and was very nice about it, but seemed slightly confused, and I don't blame him. The hummingbird, incidentally, looked a lot like this. 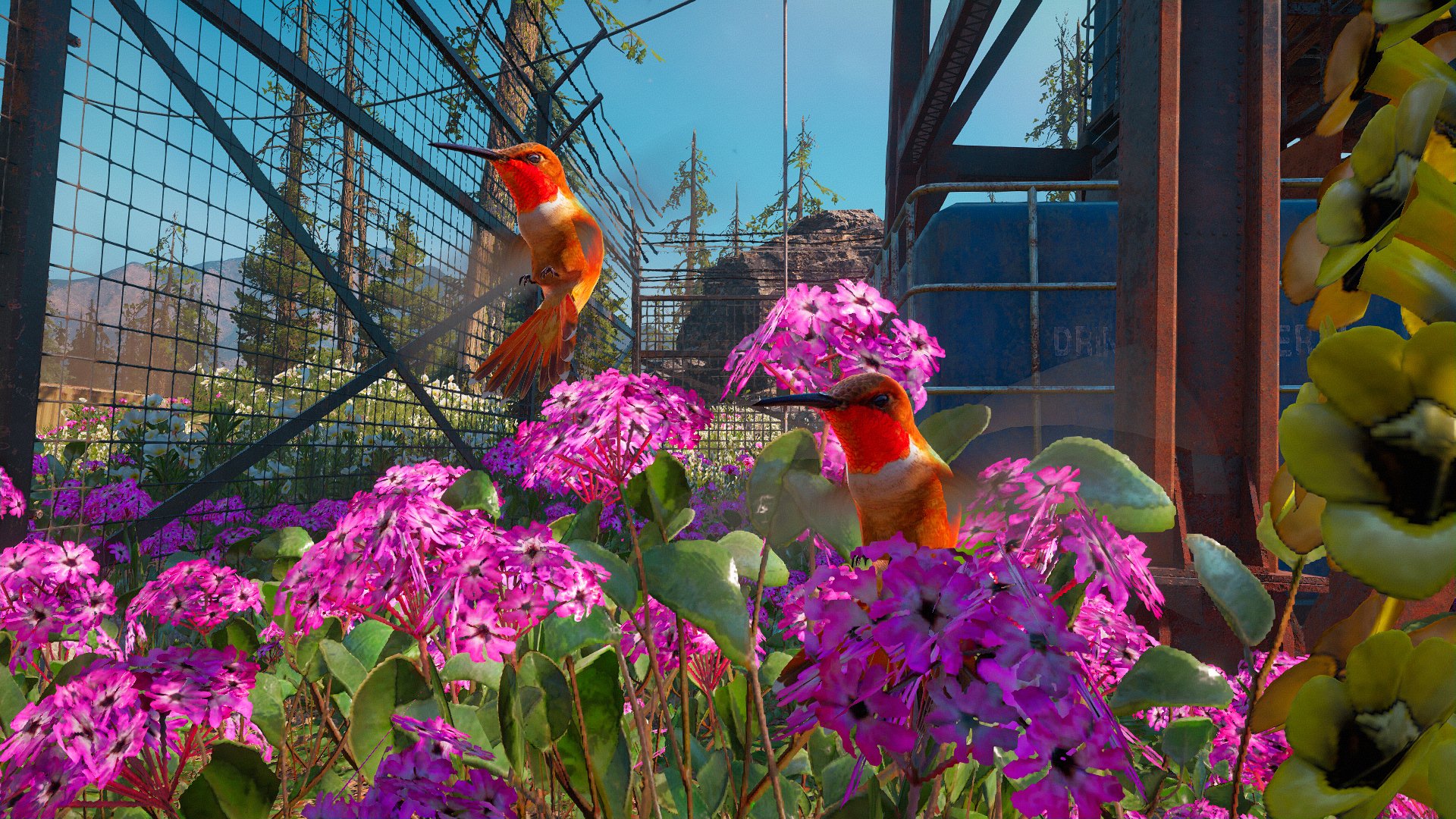 I think this game also has a story? Something about saving a plucky band of survivors and helping them rebuild their lives in the face of - ooh, this one's yellow. 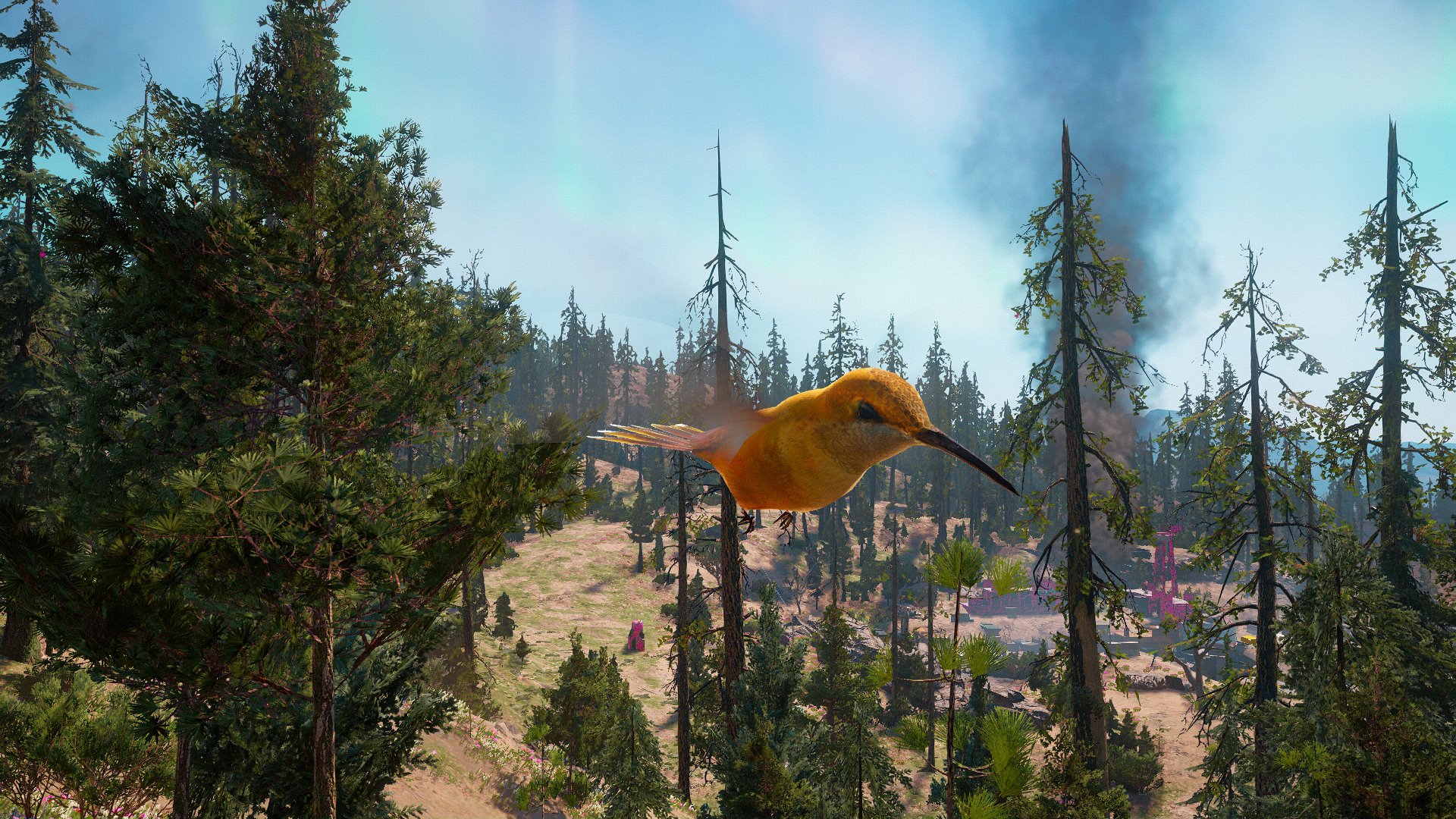