Rat-avoiding stealth adventure Ghost of a Tale is finally scampering out of its early access bolthole on March 15, says the developer. You remember this mousey hero, don’t you? It’s Tilo. He’s very cute and sometimes wears clunky steel armour, which doesn’t make him intimidating but only more adorable. He’s been scurrying around under the development floorboards for five years but seems ready to poke his twitching nose out and make a panicked sprint towards the exit.

It’s an adventure game in the style of Redwall. Mainly, you explore the animalistic world and avoid rat guards by sneaking around in dark patches or distracting them in some way. I had a go at this rodent-centric take on “dungeon crawling” a couple of years ago and found the stone courtyards and skeleton-strewn jail cells gorgeous to look at, not to mention the blacksmith rats and pirate frogs who make up its cast (that’s what you get when the lead designer is a former Dreamworks animator). But I also found the fetch quests dull and the minute-to-minute sneaksing as antiquated as any PlayStation 2 era stealth-em-up.

That said, it's been two years and only a quarter of the game’s world was open to me back then. Developers SeithCG have also shown off some visual differences between then and now in their announcement post. Here’s two images of a well. 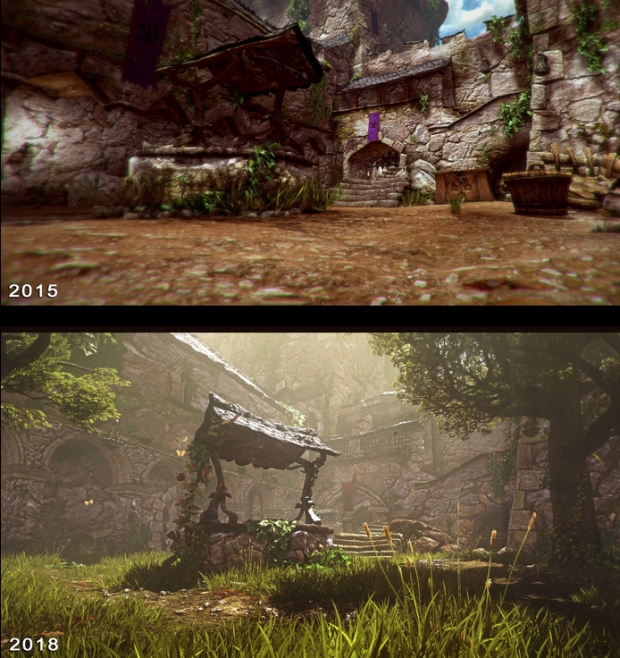 If the game’s strength is its beauty, then it makes sense to pump up the prettiness to silly levels. And it looks like they’ve done that. Hopefully, they’ve also given Tilo something more interesting to do than backtrack through previous areas, picking up generic wotsits for his new friends. That was my biggest complaint. Because I’m lazy, here’s a self-citation from my previous mousing.

… the real joy comes from just breathing in the place, the architecture, the shortcuts, the secrets. The fact that it has a day and night cycle, where the other characters go to sleep and you have to return to them when they’re awake to give them their shopping, is also old-fashioned. But, crucially, this is old-fashioned in the lovable way, evoking the days and nights of Zelda or Pokemon and granting the castle a life of its own. That’s the thing that has me conflicted about this game. I really want to see the other 75% of this world – its walls, its villages, its forests – I just don’t want to spend all my time there collecting mushrooms.

As for the game's length: “[I]t should roughly take you around 8 to 10 hours if you don’t care much about the quests and story,” says lead developer Lionel Gallat, “but almost double that if you want to take your time and see (and do) everything.”