Is Thief: The Dark Project the best game ever? If Thief II isn't, then it definitely is. With its twentieth birthday arriving today, I've been replaying the original sneak 'em up to see if it still holds up (of course it does), and whether my memory of it stands up to reality (it's way better than I remembered).

I'm a forgetful sort. It certainly has its advantages though, being able to rewatch movies a decade later and be surprised all over again. Or indeed experience Thief as if for the first time, despite the fact that I last re-played it nine years ago, and at least twice more before that. I swear to you, I encountered entire levels of this game with absolutely not an inkling of recognition. Being an idiot is often great. And wow, does Thief stand the test of time: this is still the best game I've ever played, and every time I play it I like it even more.

(One thing I did remember, however, that hasn't changed one bit, is how utterly horrible it is to screenshot. A game that requires obsessively avoiding the light does not make for a decorative article.) 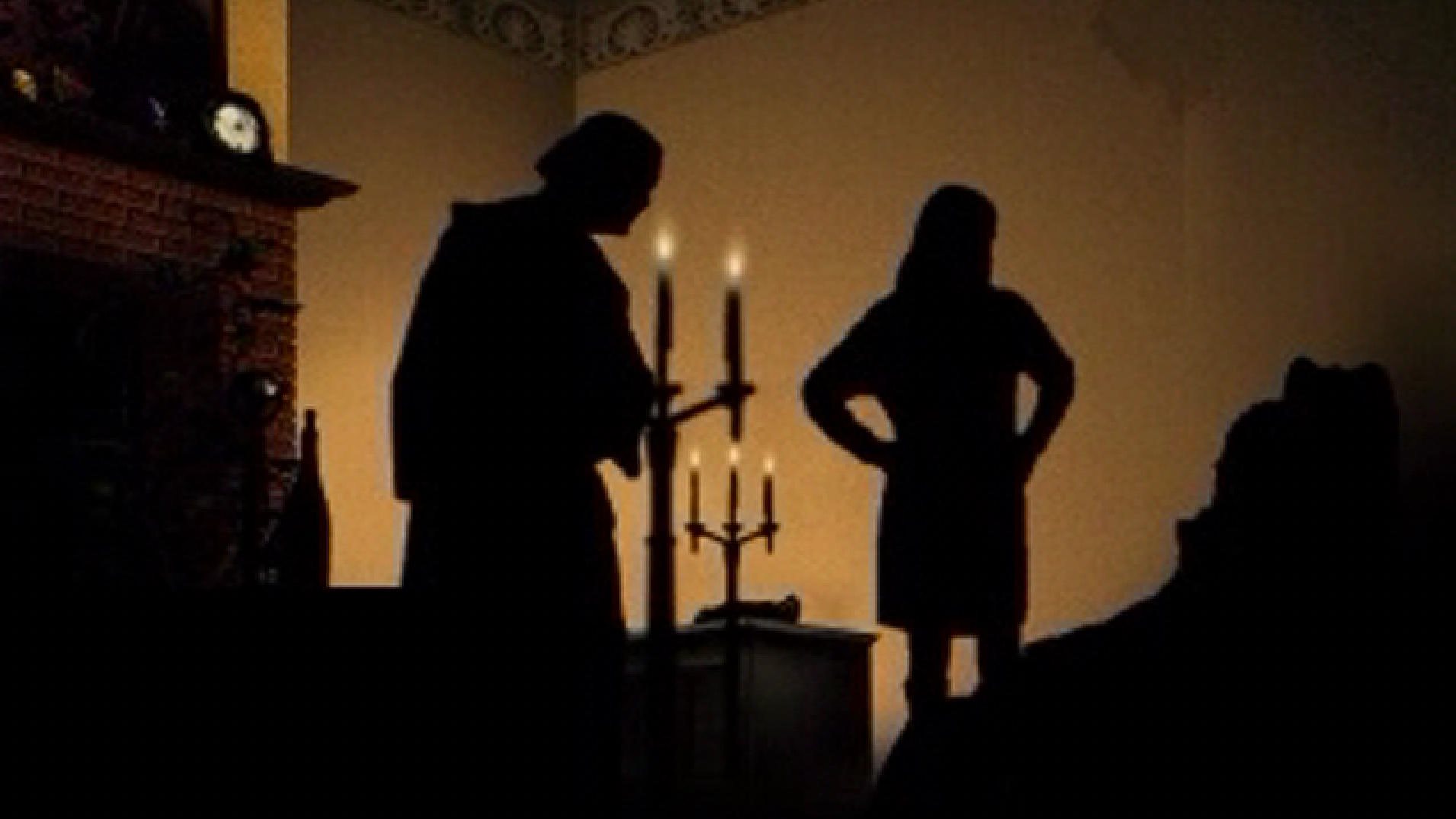 I should explain precisely what I've been playing, because there isn't really a viable "original Thief" these days. Thief Gold was a revised and expanded version that came out a year later, in 1999, with a few new levels and some texture improvements, and that's the base game I've been playing this time. It's pretty much the only version you can buy these days. However, to get it running neatly and smoothly on my ridiculous monitor, I opted to be a little unfaithful and install the NewDark mod. (I kind of wish I'd gone for the Thief 1 HD mod.) This fiddles with a few textures, improves skins, and most of all, lets me run a game from 1998 in 3440x1440, which is plain silly, and completely wonderful.

There are just so many things I want to celebrate about Thief, so I'll do them in sections. Let's begin with just how deep it is. 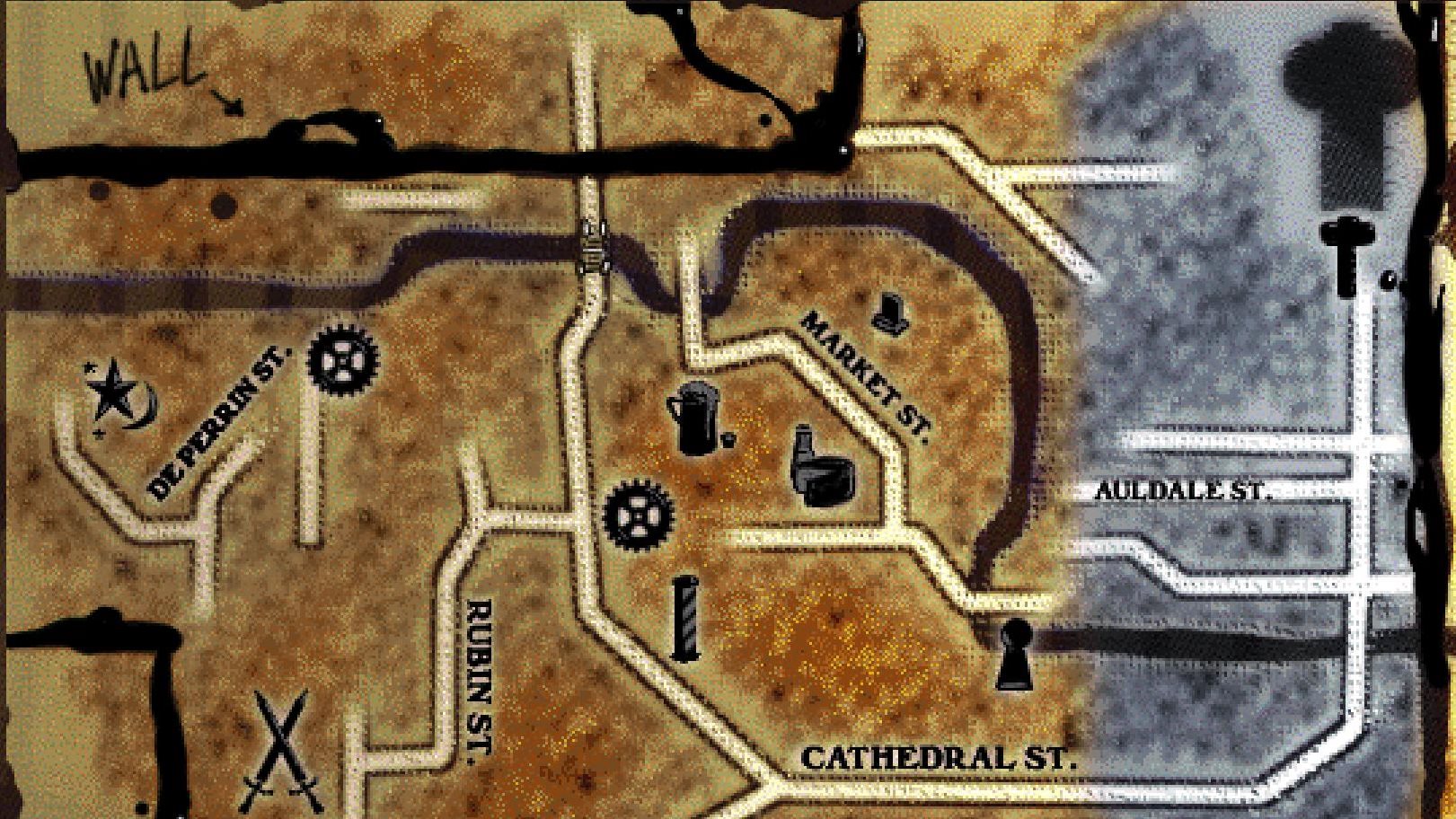 Thief is a big game. I played it a whole lot for three days, and am only halfway through. But Thief's size doesn't come from bloat, nor even from a ludicrous number of missions. And it's certainly not by the present day means of filling a large map with trivial tasks. It's big because it's deep, each level a masterpiece of level design that makes extraordinary use of space.

Some levels certainly are sprawling and surprisingly large. Level 6's Haunted Cathedral is an entire abandoned town of meandering streets and collapsing buildings, woven through by innumerous tunnels and pathways, rooftop leaps and underground sneaks. It's busy with zombies, ghosts, burricks (bonkers lizard creatures that spit poison clouds), the gruesome craymen, fire elementals, and spiders, and yet at no point feels anything like a shooter. Killing any of them is optional, and most likely unadvised. But it's also packed with story, environmental elements that speak of a town lost to its people, as well as personal tales hidden in notes and books. And indeed it's a brave thief's playground, packed with forgotten valuables. Then it's also a vast puzzle to solve, trying to work out how to reach the Cathedral, and indeed seek out the Serpentyle Torc along your way, all while solving puzzles to discover secret passages and hidden treasures. 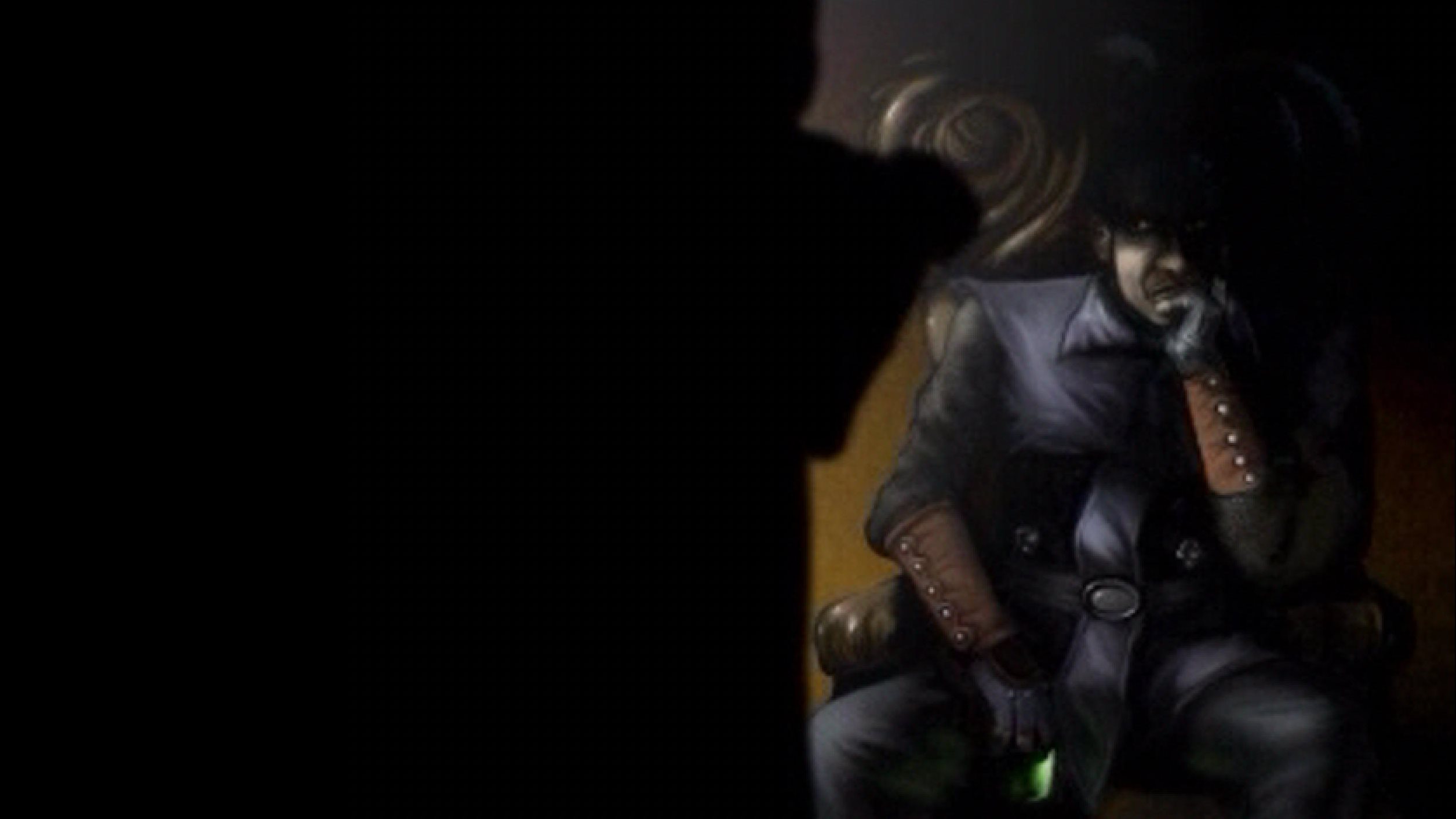 But then some levels are simply a building. And yet feel just as enormous, just as detailed, just as packed with character and history and adventure and surprises. And indeed, some buildings are anything but simply a building. Constantine's mansion is an impossible structure, utter madness delivered with bewildering nonchalance. At first all seems normal as you seek out a magical sword to pinch, then things get a little odd as the rooms are inverted, rotated, madly decorated, until eventually any sense of reality collapses, with twisting corridors of floor tiling lead to impossible outdoor hillsides and muddy tunnels, culminating in the briefest of moments set in... outer space?

Thief does this sort of thing constantly, somehow not only inventing an entire genre, but unpacking and analysing that genre before anyone's even given it a spin. In many ways Thief is a deconstructionist piece about the nature of level design, somehow at the same time as being a game where you sneak about in the darkness, bonking grumbling guards on the back of the head with a blackjack, and grabbing everything shiny.

No matter whether you're exploring a multi-tiered abandoned mine-cum-prison, Lord Bafford's Manor, or mushroom-trip lands, Thief always feels like a game with just so much to do, so much reward for your time. 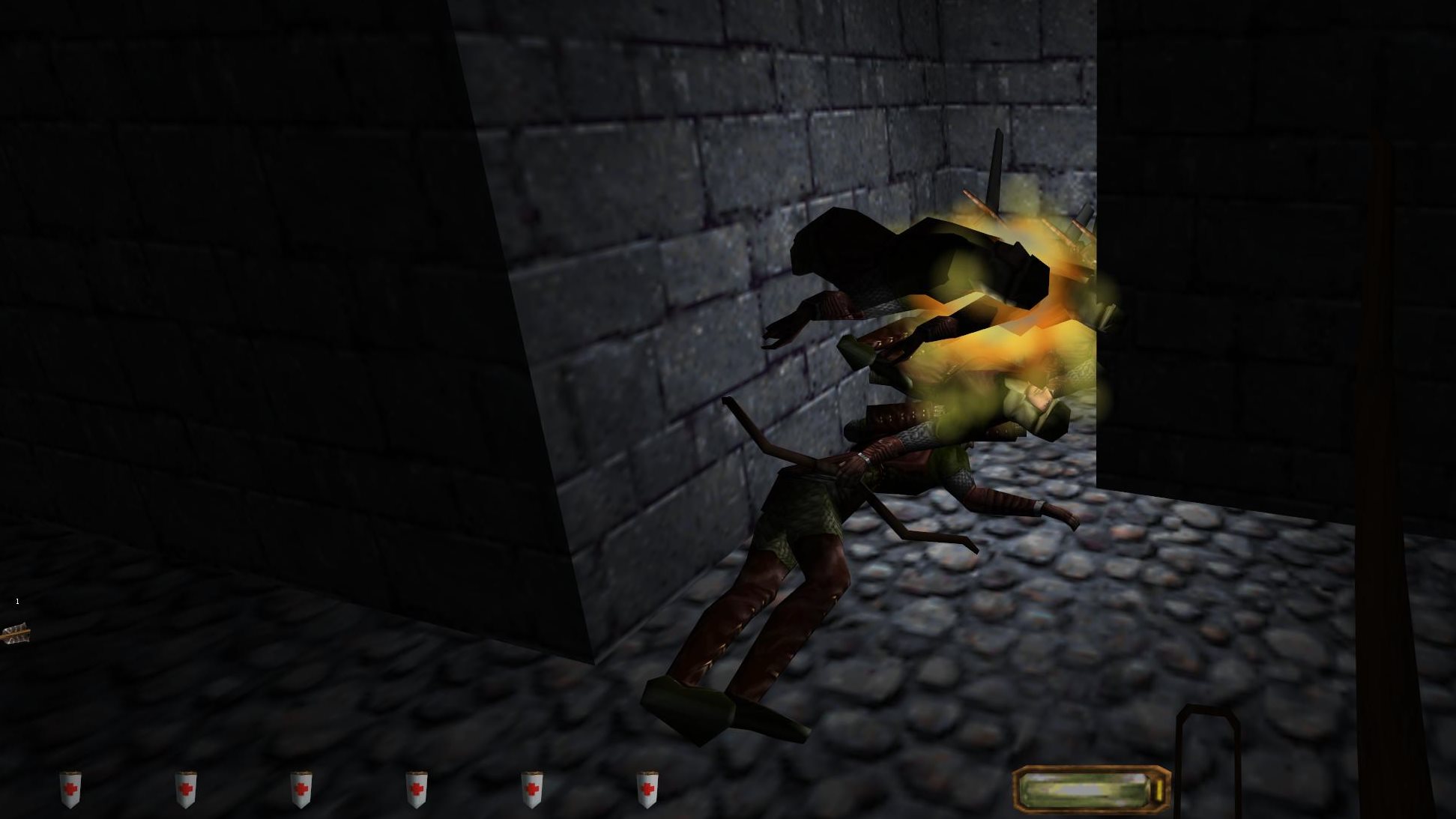 When I think of the joy of piling sleeping bodies on top of one another, I immediately think of the Dishonored games. I had forgotten it began with Thief so many years before! Oh what silly fun it is to needlessly retrace your steps to that one shadowy corner where you're stashing all your unconscious foes, just to see how teeteringly high you can stack them.

Certainly, Dishonored does it with more panache, having modern-day physics see them slump into piles like dirty laundry. Because Thief's tech means the always horizontal guards stack more like Jenga blocks, and watching them slide downstairs without a bend or lean is very funny. I think we all know which game does it better. 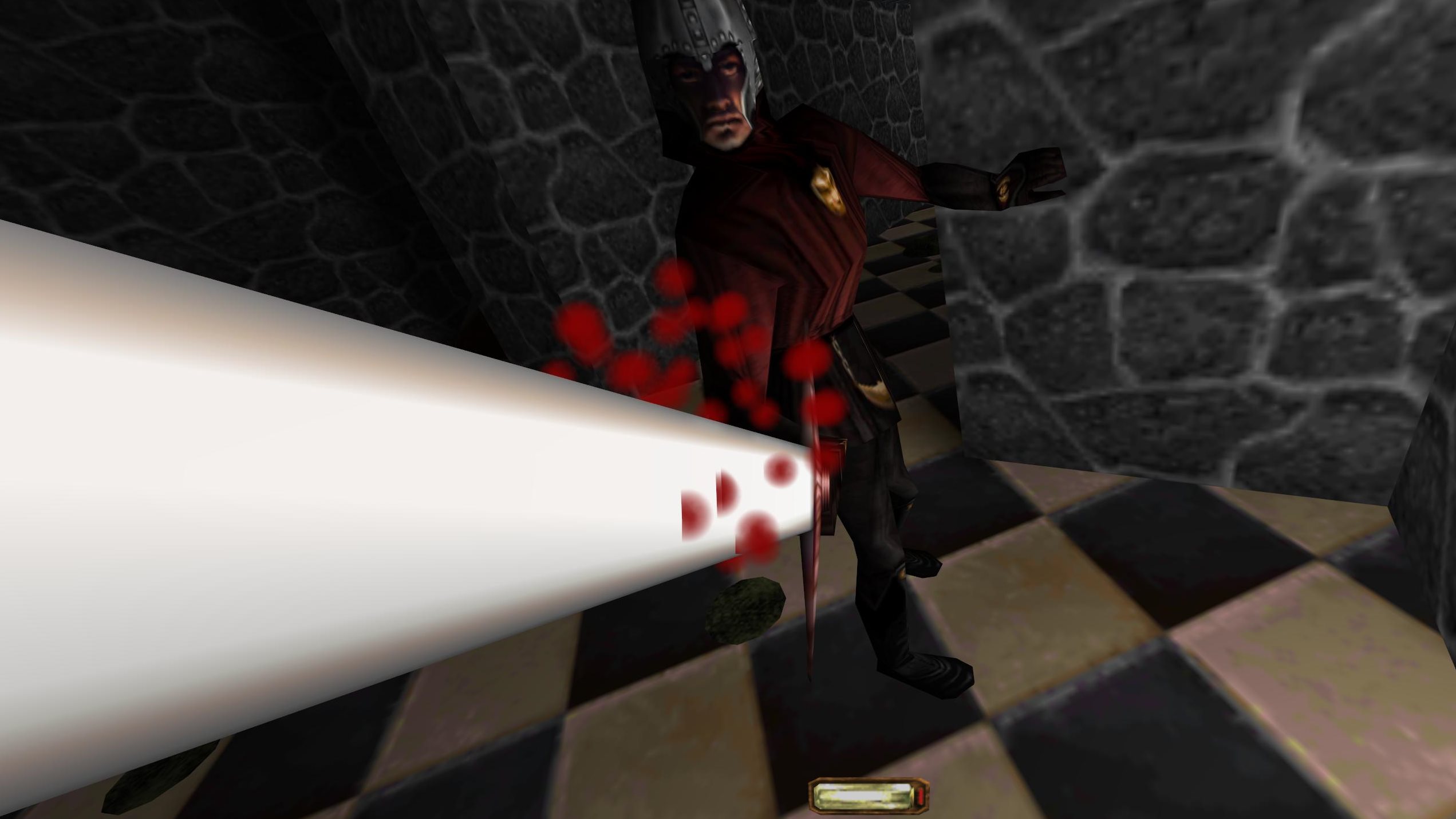 I've said it before, and I'll say it again: Thief's difficulty levels are one of the most important, and yet most woefully ignored, elements of game design. Because Thief understands something that even the "immersive sim" genre it spawned too often fails to get - that difficulty doesn't need to be a barrier to entry, it can be about how much effort needs to be put in.

On Normal you'll only need to complete the main tasks. On Hard you might be asked to fish out a decent amount of extra loot. On Expert it'll be a lot more loot requiring some proper hunting, and even further tasks, perhaps even complete side-missions, to perform.

Take a look at the bottom and top difficulty options for the level The Sword, for instance.

This captures it so perfectly. This level's creatures don't dish out more damage on Expert. There aren't fewer guards to escape from on Normal. There's just more to do, more interesting places to reach, a greater need to be thorough and meticulous.

The most important difference, and one of the things that cements my love for Thief so solidly in my heart, is that line in Expert that reads,

"Pull off the job without having to kill anyone."

Isn't that beautiful? Isn't that the antithesis of so much of gaming, where "difficulty" means nothing other than "the amount of killing"? In Thief, Looking Glass made the declaration that in their universe of difficulty, the harder the setting, the less death there would be. Complete Thief on Expert for every mission and you'll not murder a single human from beginning to end. Gosh you'll give out a lot of headaches, but no deaths.

It makes a big difference, too. I've been playing this yet again on Expert, and it removes all your shortcuts. In many instances there might be one damned pesky guard who constantly thwarts your attempts to scuttle across some noisy tiled floor, and on lower settings you could just put an arrow through his head. On Expert, that's an instant game over, and god bless that. Because it pushes me into far more creative play, improvising with the tools, seeking out hidden alternative routes, and the utter satisfaction of finally bonking the bugger on the back of the head and victoriously dumping his snoozing body into the shadows. 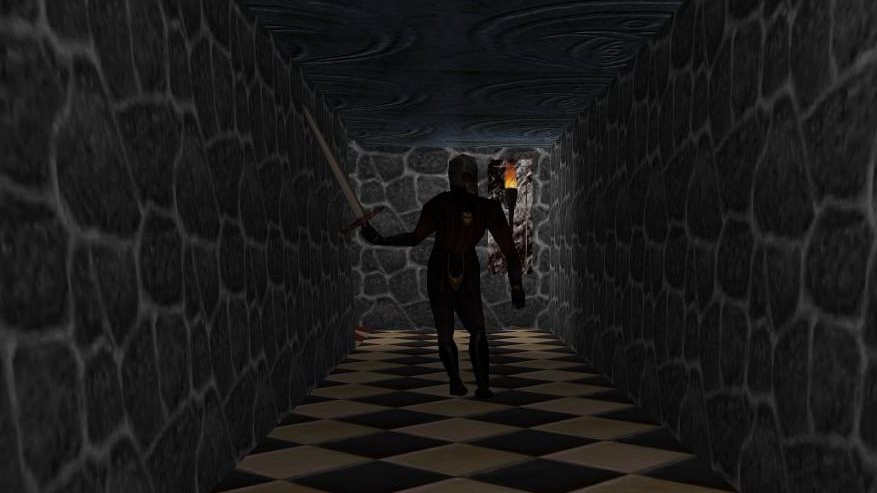 Thief was maligned on its release for its absolutely awful textures. And they remain just dreadful. What's odd is that with time they're far less offensive, because a big part of your brain is already dedicated to being OK with how dated it looks and just enjoying the play. The crappy textures just get filed under "olden days". But something else entirely defies the passage of time and provides me much pleasure: the guard animations.

The guards are all-round great in Thief, with their "Doo-be-doo-be-doo"ing and grumbles about rats, but my favourite thing is the pose they take on when on the hunt. The gorgeous cartoon prowl of these blocky blokes is still just as effective, no matter how few polygons they may have inside them. And I suspect little since has achieved the same rush of adrenaline as when I see that animation sproing from hunting to CHASING! and full panic enters my every vein.

This perhaps might seem trivial, but alongside the all-consuming gratification of replaying this masterpiece of gaming, this time around I've just been enchanted by the sound of the lockpicks. I'm going to make the irrefutable statement: they are the greatest sound effect in all of gaming history. Just listen:

Gosh it's just so satisfying. 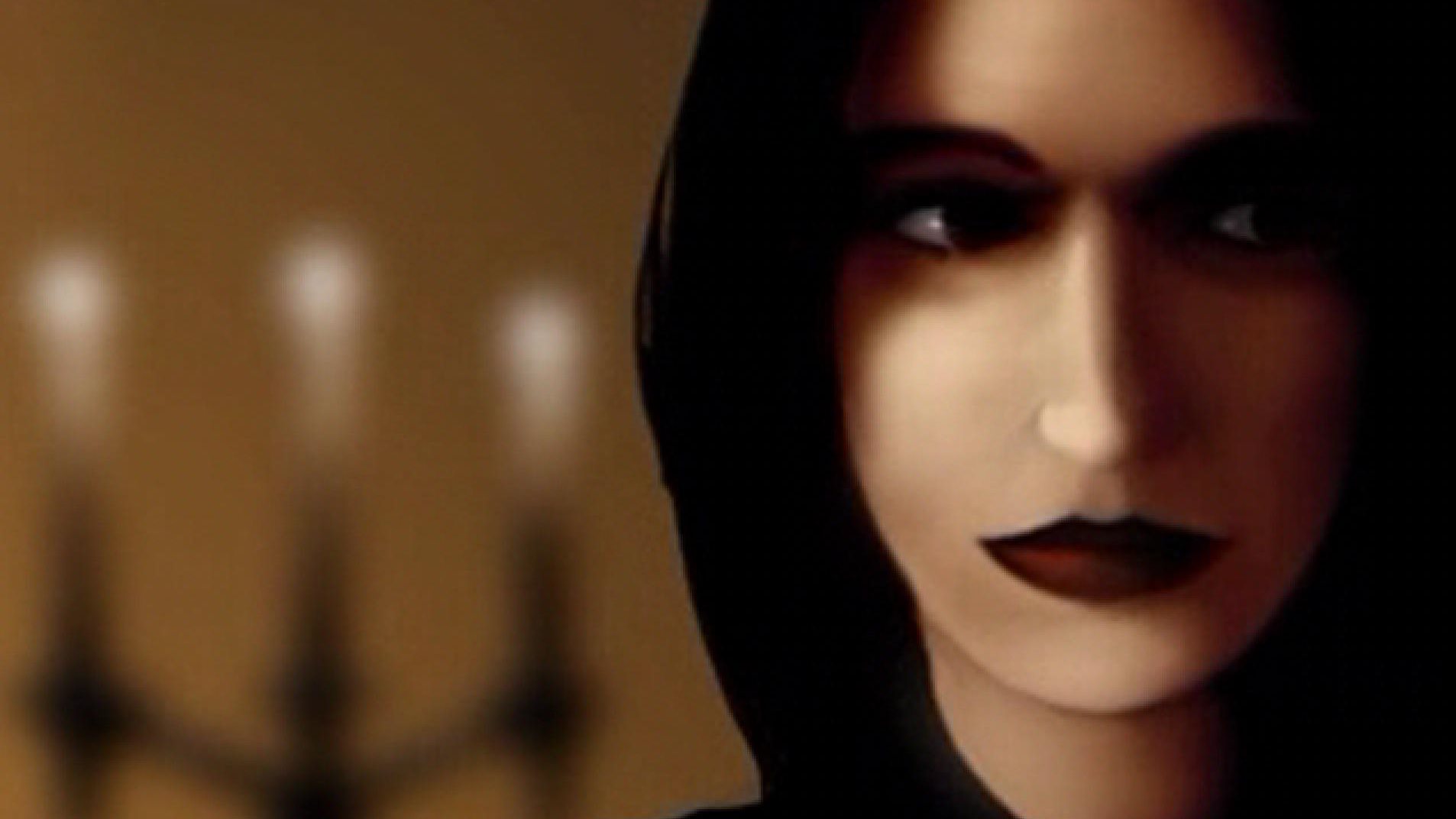 There's so much else I could celebrate. The squirmy fear of sneaking up behind a guard, followed by the euphoria of a pick-pocketed key. The subtlety of the writing, as they began a three-part epic in their magical medieval world. The sense of just plucking away at a single level for a whole afternoon, and never feeling a lack of progress or a need to move on. Perhaps most of all, the soothing sense of safety when secreted in the pitch black, surrounded by the distant dangers of light.

Thief is a masterpiece, and as a masterpiece should, it completely withstands the passing of time. To play it full screen on a super-wide monitor is a treat I almost certainly don't deserve. The very essence of its brilliance isn't hindered by dated graphics, and I can attest from my four-year-old's immediate discomfort when watching for a couple of minutes that it instantly evokes its imposing atmosphere no matter how old the tech.