Hot on the heels of the Hidden Dreams free DLC, the Hollow Knight [official site] devs have announced the second in their trio of free-of-charge content packs for the gorgeous, insecty Metroidvania. This one is called The Grimm Troupe and will hit PC at Hallowe'entide, so the end of October. There's a super cute movie poster-type promo image which I'll pop after the jump along with the trailer: 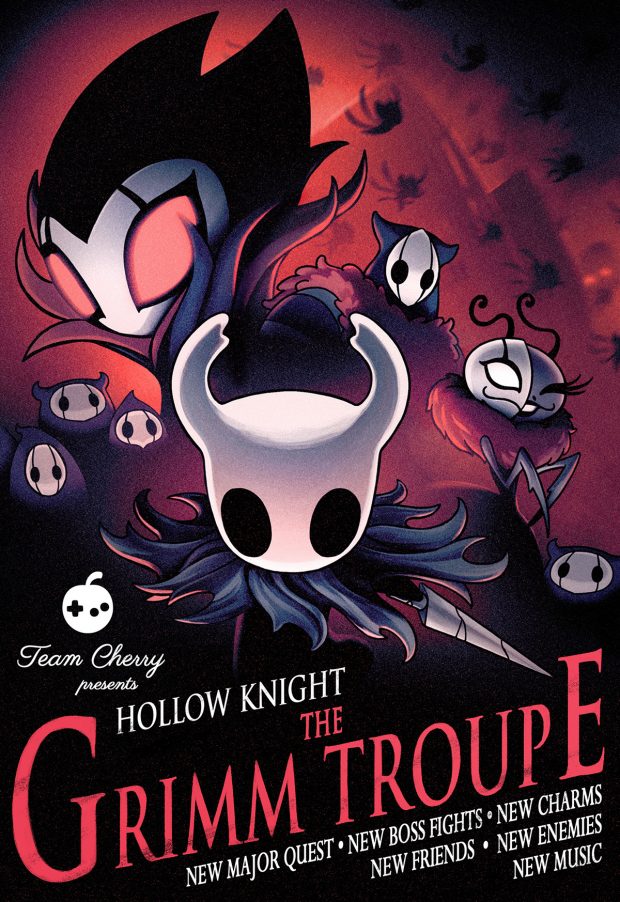 The main meat of the DLC is, I think, the quest where you summon the Grimm Troupe to the world of Hollownest: "Take part in a twisted ritual that stretches the breadth of the kingdom and bestows the player with a powerful new ally."

Part of the quest will involve some new boss battles ("a dark new foe and a twisted scarlet spectre"), smaller foes and mobs to fight as part of said quest, some new friendly characters, music, and charms. The latter are items you equip in special slots to grant your knight extra perks - increased spell damage or strength bonuses if you're on really low health or thorny vines that damage enemies near you when you take damage, stuff like that.

The specifics aren't being revealed on the charm front yet but Team Cherry have offered up the icons so players can speculate. I've always been a big fan of Hollow Knight's style so I'm bunging them here for you to ponder and for me to appreciate as potential buttons and badges!

There will also be the ability to place markers on the in-game maps so you can note locations more easily and make your way back, and there will be Russian, Brazilian Portuguese and Japanese language options. If you're a GOG user you might also be interested to hear that this DLC will also be accompanied by the full suite of GOG Galaxy features - that's the GOG take on a Steam-type service, so overlays, screenshotting, cloud saves etc etc.

The full update blog is here and contains Kickstarter backer reward info if that's relevant to you and some cute fan projects. It's unclear whether Hallowe'en means 31 October, or that this is an event that will be launched to be enjoyed over the Hallowe'en period so perhaps a bit earlier. Let's keep an eye on date info!