If you click on a link and make a purchase we may receive a small commission. Read our editorial policy.
This is The Mechanic, where Alex Wiltshire invites developers to discuss the difficult journeys they’ve taken to make their games. This time, the first-person production line builder Satisfactory.

Satisfactory’s Update 3 is one of gaming’s great bait and switches. For months, developer Coffee Stain had been denying that its first-person factory-building game would ever have pipes. Why would they? You could already transport liquids on conveyors, so what was the point? And then in February, the studio presented a magnificently overblown trailer which confirmed the opposite of what they’d been claiming for all this time. Pipes were coming. The chat went wild.

That trailer really is something. From a quiet start that seems to suggest the update’s key feature is a new desert biome, it builds into a crescendo in which pipes explode out from inky infinity. It’s a wonderful thing, a celebration of something which seems on the face of it ridiculously mundane. Pipes.

And yet pipes are, remarkably, worth the fuss. Getting them running in your factory marks a rite of passage. They’re a new thing to plan and work with. They gurgle and pulsate. They open new possibilities.

They’re also product of a close relationship between a developer, a game in early access, and its community of players; a point of entertainment and communication that existed outside the game itself.

“The question of pipes came up immediately from when we said we were making this 3D factory-building game in firstperson,” producer Tim Badylak tells me. “I’m pretty sure at least half of everyone, both internally and externally, thought we’d make them at some point.”

In fact, one of Satisfactory’s programmers, Gustav Löfstedt, had already prototyped pipes, but the team cut them from the initial release. But as pipes became a point of rising speculation and jokes among players, community manager Jace Varlet began to stoke the flames.

“In the beginning, a lot of people were asking for things that exist in other factory games. ‘I played Factorio, they have this thing, I want it here.’ So pipes was one of those things, so I was just, ‘Eh, tell me why. Your reasons are kind of lame.’ And then when I came up with a video to do that, that’s when the meme really blew up.” 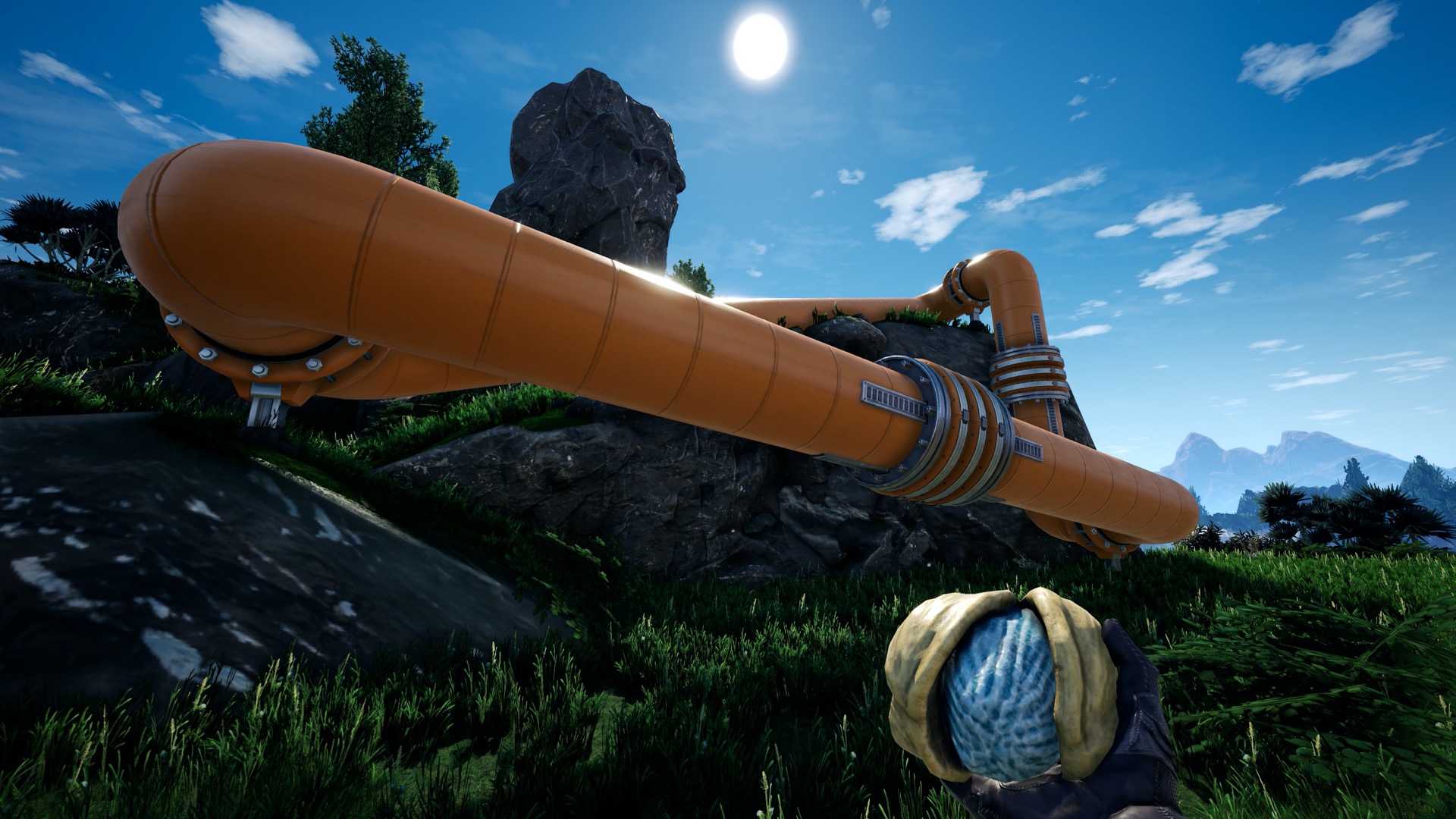 This was well before Varlet knew that pipes would be part of the game. He was just happy to have material to share with the community. Satisfactory’s designers and programmers, meanwhile, had quietly begun to discuss the idea of adding pipes to the game. “We realised we had barrels on conveyor belts that we’d just taken for granted,” says Badylak.

And yet, had they really taken them for granted? What functional use would pipes have when conveyor belts were already happily transporting fluids around players’ factories?

“That was the wall we had to climb,” says game director Mark Hofma. “Pipes started becoming a meme and then everyone in the studio said we kinda had to add them. But what is the difference? How do you make pipes fun, without them just transporting from A to B, like a conveyor belt. That was the biggest hurdle. They’re pipes.”

Hofma and his team started looking at what defines a conveyor belt. They have a set speed, which means that as a player you plan them out in consideration of how fast your smelters and constructors output stuff, and how fast machines down the line need inputs.

Pipes would need the same basic properties of input and output, but the team realised Satisfactory’s three-dimensional nature could help them introduce something new. A lot of building in the game is about going up and over things, stacking storage crates and supply lines on top of each other and taking into account the topography of the land: its inclines and outcroppings.

“So if you’re going to build your pipe upwards, it’s going to slow down your flow rate,” says Hofma. “That’s the only thing, in the end, that we did to make pipes different, that pipes have pressure.”

And that made them a challenge to add to the game, since nothing else works like pipes. “Our code team was really pushing to make a real fluid system, with backflow and a lot of other fluid aspects. In the end, it took us a long time to make.”

Pressure is also invisible. One of Satisfactory’s principal satisfactions is seeing streams of products moving on conveyors from one machine to another, where they’ll be refined into something new. You get an immediate impression of whether things are working and at what kind of rate. But while conveyors are open, pipes are enclosed.

“We were convinced that pipes are fun to build with, but as soon as you hooked them up and didn’t get any feedback you were, ‘Huh, OK. How do I debug this?’ Conveyor belts have this inherent aspect of seeing what’s on them,” says Badylak.

“We talked a bunch about adding windows to pipes, that would be super-cool, right, seeing the actual fluid!” says Hofma. “But there was no way with the way the calculations work to reliably show you how high the fluid is in a little window on the side. I’m not sure who came up with the indicator. Was it you, Tim?”

“Yeah, I did the first sketch,” says Badylak. So you can see what’s happening from a distance, straight segments of pipelines feature rings which show the direction of flow and rate by visibly pulsating, and a coloured section indicates the type of liquid.

“I wouldn’t say we’re done,” Badylak continues. “There are definitely issues that we might look into and improve.” Pipes, after all, introduce new numbers to track and plan for: a standard pipe transfers up to 300 cubic metres of fluid per minute, and water extractors output with head lift of 10, which means its pressure allows for going 10 metres upwards without reduced flow.

“Some people are like, this is easy, it’s just two variables and you can read them right there, and others don’t understand,” says Hofma. But it helps that the game only starts nudging you towards learning to build pipelines once you’ve got a good grounding in the game.

It was soon clear to the team that coal power stations -- which were already part of the game -- were a good place for the update’s new fluid systems to play a part, since steam drives their turbines, and the point in the game that you start to build them marks a key point in your factory’s progression.

“You have a handle on how conveyor belts work and how to set up automation, and coal is the first time you can automate power,” Hofma explains. Since coal power stations are the first energy source that’s entirely hands-off, your first frees you from having to constantly refill your biomass burners with leaves and wood. You’re finally free to build and explore. “Adding that challenge and having that big reward, it’s really nice, I think.”

Varlet, meanwhile, continued to deny pipes would ever exist in Satisfactory.

“In the beginning it was just fun because I didn’t know pipes were going to happen, and not just fun for me. As far as I could tell, a lot of others were having fun with it. But then we announced the update, and I had this job to buy time, to be this jester -- hey everyone look at me! -- while everyone else was working and they weren’t giving me any information! Nine or 10 months of nothing happening.”

From the developer’s perspective, they’d already released two big updates since Satisfactory’s release in March 2019, adding conveyor lifts, nuclear power and trains, features that were already promised for the game.

”We felt the team was quite stressed,” says Badylak. “They’d been working really hard on getting the game out and doing these updates and we had so many bugs and performance issues to fix. We’d promised trains, so we wanted to make sure they came out as quickly as possible. Then we said, OK, let’s do a bigger update but let’s take more time, and if we don’t promise anything, let’s see how that works.” 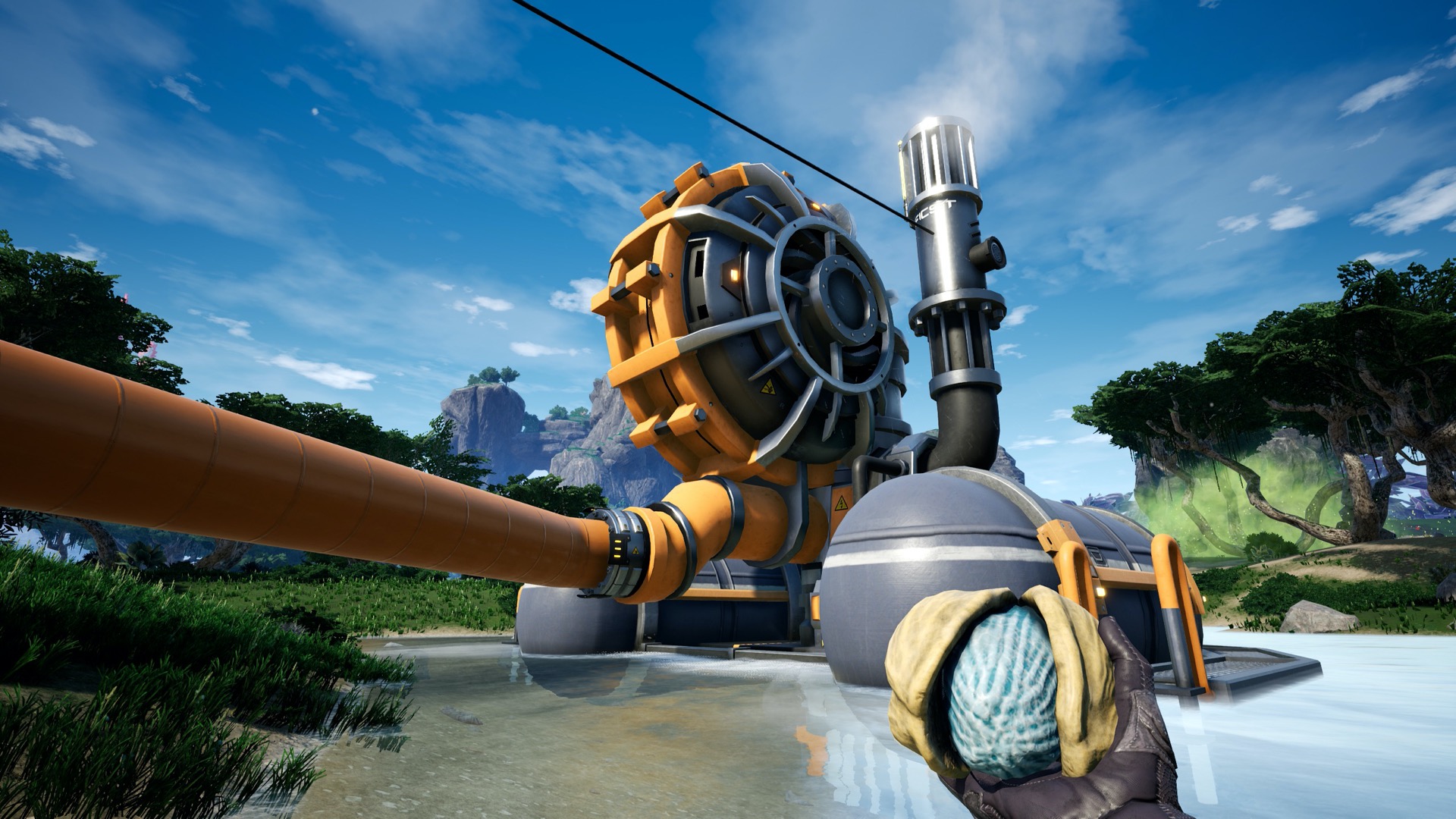 “We did promise something, Tim,” says Varlet.

“What did we promise?“

“A release in December.”

“We sure missed that.”

“We wanted it to be in players’ hands before Christmas, but because of a bunch of stuff -- we didn’t feel pipes were good enough, that players would understand them. The team was stressed.”

So Varlet kept up the pretence right up to February, when he hosted with fellow community manager Snutt Treptow a Twitch stream in which they revealed the pipes trailer. The reaction was immediate and explosively positive.

Hofma was relieved at the reaction. “Literally everything, every recipe in the game got touched in some way by adding pipes. We knew players’ factories would be broken so we decided that while we were at it, we might as well just go all the way and just break the entire game with a big rebalance. It was a big worry for me personally, because all these people had invested in this game and they loved their factories. I was scared that people would be pissy.”

But in fact, a lot of players were happy to fix their factories, or to start again from scratch. “They were saying, ‘It’s an early access game! It’s new content! It’s no problem. I love this game,’” says Varlet.

Varlet is intensely proud of what he and the team around him achieved with the reveal, partly because it epitomises the philosophies he brings to his role as community manager. “One of the things that’s most important to me is transparency and humanisation of both the studio and also our audience,” he says. “They’re not idiots, they’re people, and they understand things.”

Update 3 was the culmination of a joke shared between players and developers, a moment in which Varlet was able to engineer a meeting between audience expectation and the plans of a team of developers who have a clear idea of the game they’re setting out to make.

“But you can never trust Jace, as you know,” says Badylak.

Yes. What if this stunt leads Satisfactory’s players to expect anything and everything from the game in the future?

“We’ve had people say that,” Varlet says. “Things like flying vehicles, drones or whatever always come up and people have been like, well in that case we’re going to get our drones.”

“I don’t think we’re going to get them, are we, Mark?” says Badylak.

“I’ve said no drones in the past,” says Varlet. “So it makes sense that we’ll add them.”