If you click on a link and make a purchase we may receive a small commission. Learn more.
This is The Mechanic, where Alex Wiltshire invites developers to discuss the difficult journeys they’ve taken to make their games. This time, Untitled Goose Game [official site].

Untitled Goose Game is a game about being a horrible goose, about making a mess and watching hapless Brits try to clear it up again. But under all that, it’s a game about things. Apples, hair brushes, keys, mallets, toy planes, tulips, teapots. After all, it takes things to mess things up.

“Items are the language of the game,” co-designer Nico Disseldorp tells me. “They’re both the tools and the reward. They play a really central role in so much of what we do, and how people play.”

The first item that developer House House put into the prototype that became Untitled Goose Game was, Disseldorp thinks, a pie. 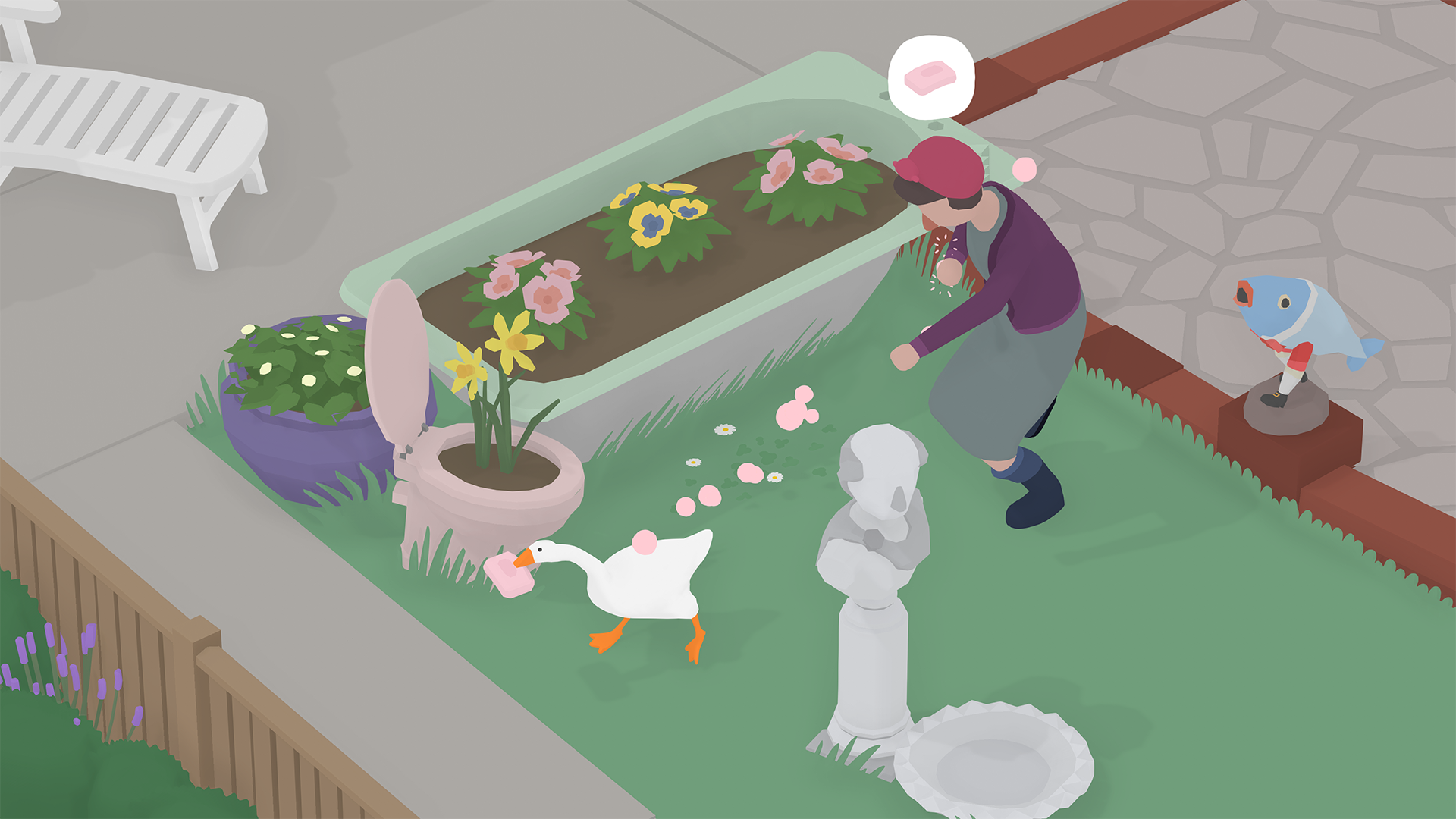 “It isn’t actually in the game now,” he says. “But the first stuff we had was food. We just thought that people in a public space might be doing something like eating, and it’d be very clear that you wouldn’t want a goose to take it from you.”

At this point, House House had already nailed the fundamentals of what you play today: a goose, a person and a bunch of objects. Take an object and the person will chase you and then try to put all the objects back in their places again.

“It was very clear that your goal is to cause chaos and the characters’ goal is to tidy it up,” says co-developer Stuart Gillespie-Cook.

The next step was to think of different ways the goose might take objects. “Rather than just having objects on the ground, we’d clip keys to someone’s belt,” says Disseldorp. “Or let’s try and make you take someone’s hat, which requires them to bend over. So we were exploring ways of bringing out different parts of a game about stealing things and having people take them back.” 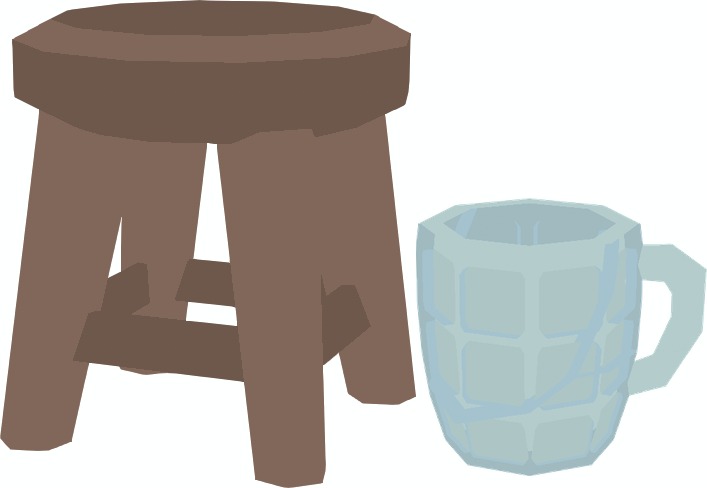 Things are so important in Untitled Goose Game that you can’t destroy them. That’s why all items, even keys, float. “There’s a well in the centre of the town and we wanted people to be able to drop things down it, because it’s funny, but we then had to make a little outlet at the bottom,” says Disseldorf. “It doesn’t make a heap of sense but it outlets into the canal so that items end up somewhere you can get them from later.”

Later, the game plays with your fears about losing items. In the pub, you’ll see only three pint glasses which you need to steal and drop in the canal, and they’re extremely easy to break. “We liked the moment that people broke two of them, and then get to the third and say out loud, ‘Right, this is my last one,’ and inevitably they’d break it as well, and she’ll get a new pint glass that was hidden before and put it out for you.”

Yes, Untitled Goose Game is also a game about jokes, and it tells them through its objects – the garden sprinkler, the mallet-on-the-thumb, the automatically opening umbrella which sends every nearby item flying (this is Disseldorp’s favourite: “we imagined it being a little bomb you could set off”). 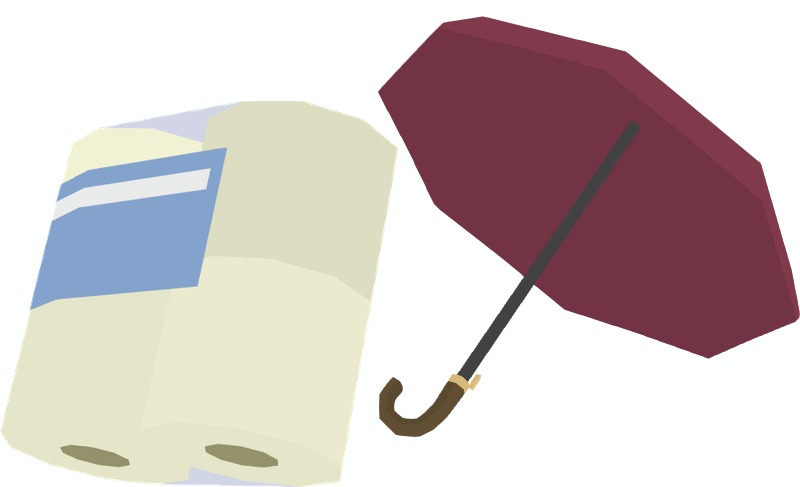 “Really, any goal in the game can be broken down as, ‘How are you going to use these items to achieve this comedic outcome?’” says Gillespie-Cook. So the first step in designing an area was figuring out what items were necessary to tell the jokes they wanted.

“Like, you’re going to pull a chair out while someone’s sitting down and they’re going to fall on their bum,” says Disseldorp. “There’s going to be a relatively economical way of translating that joke that requires having a stool and a harmonica and maybe a hat.”

But then they had to account for players not understanding the gag’s setup. What if you see the stool and run off with it before you know the man will try to sit on it? Since House House never wants to arbitrarily stop you from taking and hiding things, they figured the solution came down to being extremely clear about what’s important to the man.

“We’d add a thought bubble, so he gets one with a big picture of the stool and he’ll look around and scratch his head a bit,” says Disseldorp. “If you’re wondering how to make him fall on his bum and you keep seeing him think about the stool, then that’s our prompt that you’re going to have to give it back.”

Thought bubbles also give characters a sense of interior life, since they let you know about what objects are important to them. When you see that the groundskeeper cares about his radio, then that’s a red rag to your desire to run off with it.

“Every character has a little list of things that they care about that maybe no one else does, and that’s a really important part of the game,” says Gillespie-Cook. The groundskeeper becomes more and more fleshed out as you take apart his garden. Ever anxious to put back all his bits and pieces, he seems fussy and particular. You read exasperation into him as he finds his boots are out of place. 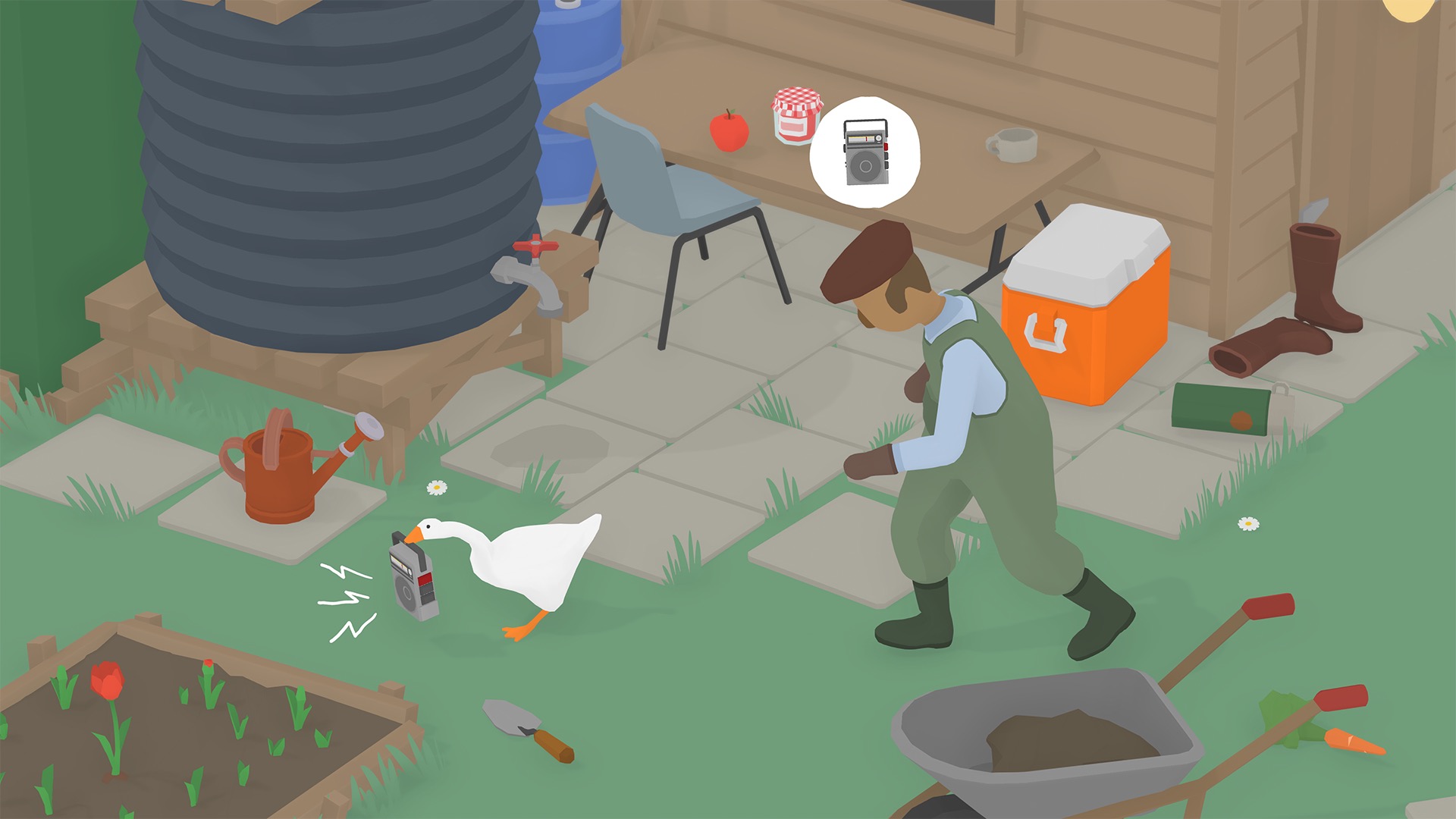 But as much as you can put personalities on the characters, they’re actually quite robotic in their reactions to your terrible goose actions – in a cosy and analogue kind of way.

“I always find this hard to talk about, but there’s this particular aesthetic of AI character that we had in mind,” says Disseldorp. “It was about being comfortable with them being very regularised and cartoony, as much as they are believable.”

House House punctuated their changes in behaviour with conspicuous animations and thought bubbles with exclamation and question marks, all to make it very clear what they were intending to do or reacting to.

“I think it helps players to start to build an intuition for what characters are going to do, and that helps them make plans,” says Disseldorp. “But I also think it makes the characters seem a bit smarter. They no longer seem like they’re just doing random stuff.” 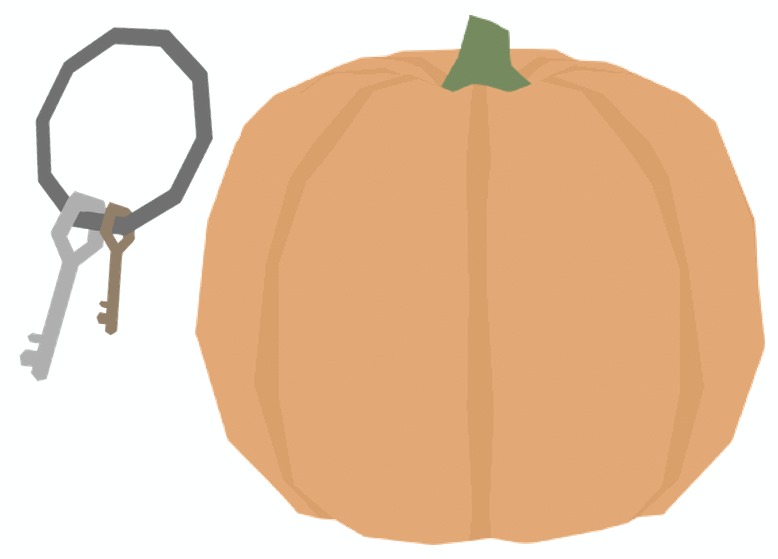 And while their actions are simple, they’re able to change priorities on the fly so they can respond to the most important thing, like the groundskeeper rushing off to deal with his suddenly activated sprinkler.

“It’s a bit arbitrary; I don’t know why a sprinkler has to be more important to him than a pumpkin, but players will get a feel for it and experiment, and then they’ll use the sprinkler as a way to distract him.”

“They’re funny pantomime characters who have very clear desires,” says Gillespie-Cook. “That made most of the work easier for us. You don’t really need to think about his motivations in turning off the sprinkler in order to know he doesn’t like it and reacts in a big funny way.”

That’s because Untitled Goose Game is a playable Beano cartoon about a bad goose. ”Falling back on cartoons, I think, has been important for the whole development of the game,” says Gillespie-Cook.

So, while its setting is culturally set as an Enid Blyton-y England, most of the objects in Untitled Goose Game are cartoon ideals, so they have clear and unmistakable silhouettes. “They can’t be too frilly or look too specific,” says Gillespie-Cook. “If you’ve got a pipe in the game, it has to look like a classic pipe.” 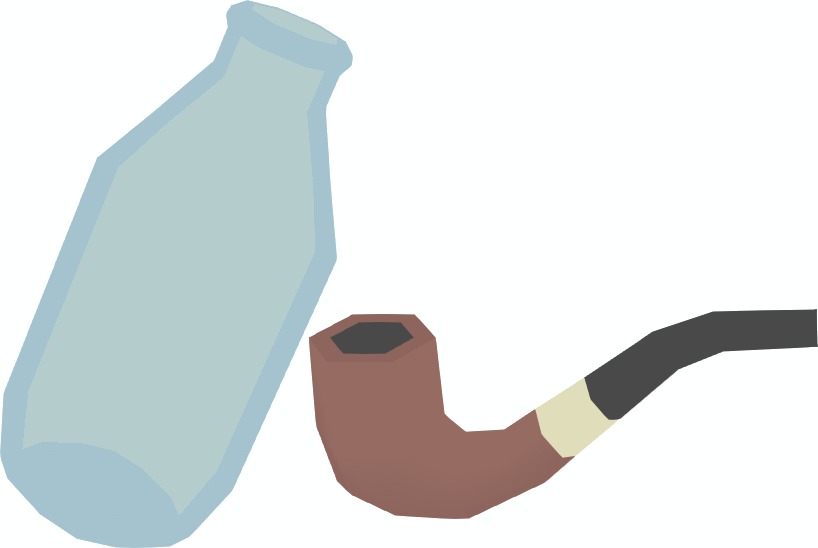 At least, that was Disseldorp and Gillespie-Cook’s direction. Artist Jake Strasser, who worked with Kalonica Quigley to make every object and design the scenes they fit into, had his own take.

“He takes a different approach of wanting everything to be culturally grounded,” says Disseldorp. “We’ll often be like, ‘Yep, you’re going to go into this area and there’s going to be a giant cartoon bell right next to this person’s chair because that’s a funny joke.’ And then Jake will say, ‘Really? A big bell, in someone’s back yard.’ And he’ll have a big talk about how outrageous it is that that would exist in real life.”

But Strasser would find a way, working out a credible mount for the bell and a way it could be rung, and then filling out the area with more objects to further cement personalities. “He’ll end up selling this thing that seems on its surface like a ridiculous cartoon setup.” 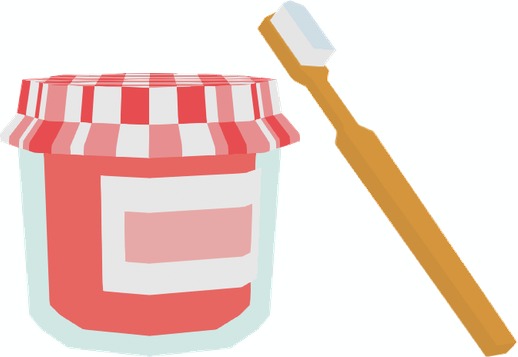 He also had to sell the objects as things a goose could actually pick up. “It helps that the goose can drag things,” says Disseldorp.

“I remember that being contentious!” says Gillespie-Cook. “When we got over the hurdle of letting it move stuff that’s as big as its own body, it really opened a lot of doors. It was one of the concessions we made over our restrictions.”

But while little details were added to large objects that made it clear the goose would grab it from that point, it was actually harder to get characters to carry objects without them looking odd.

“I’ve seen a human carry that thing before!” says Disseldorp.

“You get away with a lot because the goose isn’t meant to hold anything,” says Gillespie-Cook. “It’s always going to look a bit clunky and that’s part of the comedy of watching a goose carry whatever it is.

“There’s a certain class of object – I think it’s only the teapot and doll in the final game – that you drag around but is light enough that if you spin around with enough force, it picks up off the ground and you can hammer-throw it. That’s my favourite.”

“It looks like it could only have come from hours and hours of bored playtesting, but we didn’t design them specifically,” says Disseldorp. “It’s something about their particular shape and their centre of gravity.”

Full of emergent meaning, Untitled Goose Game’s objects are powerful like that. They let you take from them what you want. And then you hide them and watch genteel chaos ensue.