For those of you who need a bit of help in the Vault of Typhon and getting to the Immortals Fenyx Rising ending, below is a full walkthrough covering everything from the moment I dive into the Gates of Tartaros. Everything in this video was done on Nightmare difficulty, so you can really see how to get things done with this walkthrough!

Preparing for the Vault of Typhon

Once you're ready, here's the first step: climb to the very top of the Gates of Tartaros and throw yourself into the volcano. Good? Good.

Now after a lengthy cutscene, you'll at long last get to face Typhon himself in single combat. He's really not that difficult, even on Nightmare difficulty, because all his moves are so telegraphed. There are three main moves to watch out for: 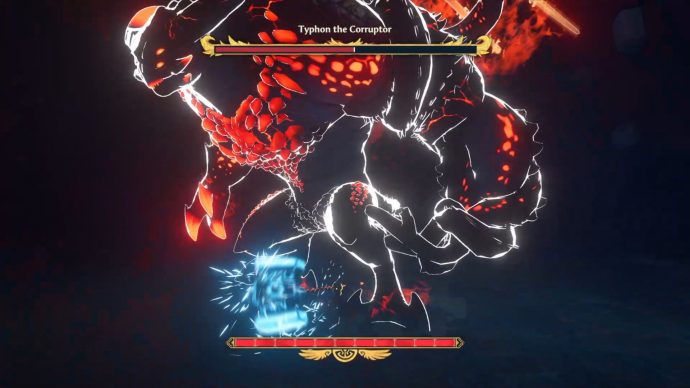 That's all there is to him. Drink your damage and defence potions, and just keep whaling at him with Hephaistos's Hammer and your most damaging attacks (whether they be light or heavy). If you're damaged, heal up and get back to taking his legs out from under him. He'll topple soon enough, triggering another even lengthier cutscene.

Next time you regain control of Fenyx, you're in the Vault of Typhon, and it turns out that fight you just had... never happened. So that's great.

First step in the Vault of Typhon is to open the main doors in front of you by activating the four crystals. There's a line of four puzzles in front of the door:

As you can see, all the main mechanics from previous main-quest Vaults make a return in the Vault of Typhon, so you know what to expect heading forward. These puzzles done, the door will open into the main square, which is filled with enemies for you to kill.

Now there are four remaining puzzle sections in the Vault, and you must complete all four, and return to this main square and defeat the enemies that spawn in between each completed section.

Run up the stairs to the immediate left after you enter the main square, and use the lift to get across. Press the button to spawn some cubes and a laser. Reversing the air current will cause the wooden cube to be pushed towards the far pressure plate, but it's intercepted by the laser every time. So you'll need to use the smaller linked cubes to move the heavy cube along so it blocks the laser, allowing the wooden cube past. After that's done, push the heavy cube onto the weighted pressure plate.

Now go to where the laser was, and you'll see to the left is a new moving platform that will take you to the next part of the puzzle. Reverse the air current at the top, then glide across and press the button at the end to spawn the parts of the next puzzle. Again, there's a wooden cube to the left which is getting intercepted by a laser, so use the linked cubes to push the heavy cube so it blocks the laser. This will get the first wooden cube into position on its pressure plate.

Now reverse the air current and you'll see that another laser is intercepting the other wooden cube, so push the heavy cube along to intercept the laser, allowing the wooden cube through. Once it lays to rest, reverse the air current again to get the second wooden cube onto its pressure plate. Finally, push the heavy cube onto the weighted pressure plate. The barrier on the left side will lower, allowing you through. Open that chest to the left of the barrier, then jump back down to the main square and defeat the new enemies.

Now go to the far left path. These puzzles are all about riding Orichalcum cubes on air currents through lasers. Jump onto the first cube, reverse the air current, and activate the cube. Jump over the first lasers (just a single jump will do), then jump off just before the second lasers hit, and glide under them to the end. Deactivate the cube on the pressure plate at the end, then take the lift up to the next section.

The next bit is the same, but this time the first and third laser fields can be jumped over, while the second and fourth need to be turned off by using an Apollo's Arrow on the target above each laser field. You have to do this while riding the cube along, because the lasers will only be turned off for a short time. Once you're at the end, place the cube on the pressure plate, open the chest, and jump back down to the main square.

It's time for the near right path now. Up the stairs and the lift, you'll see a button which spawns a rolling ball maze. Use the linked cubes to move the big cubes out of the way, and use Herakles's Strength to roll the ball to the end. Destroy the seed with the ball's flames, and place the ball in the socket where the seed had been placed.

For the second puzzle, the ball is thrown off the edge soon after being spawned by the air current. The solution to this is to push the cubes at the far end over so that they block the air flow, allowing the ball into the main puzzle area. Grab the ball and light it with the torch on the ground. Then pull it along so that it's resting against the cubes that you placed in the way of the air flow.

Now go to the other linked cubes, and push them so that they're in the gap between the ramp and the seed that must be destroyed. Now you can pull the ball over until it's in front of the ramp, and let the air current do the rest. The ball will incinerate the seed and be pushed down by various currents until it destroys another seed at the end of its pathway. Follow the ball down and roll it into the socket, open the chest, and fly down into the main square.

Now take the far right path up. This is an interesting puzzle section. The main mechanic here is that you have an Orichalcum cube and an air current, as well as a bunch of rings and a torch for what is evidently an Apollo's Arrow challenge. But there is a wall of cubes in the way that you'll have to remove with the Orichalcum cube.

For this first one, you can either throw the cube at the wall, or use the cube to get to the wall yourself, and Hephaistos's Hammer it down before flying back. Whichever your preferred method, shoot an arrow through the flames and rings and into the seed behind the wall, then glide across. You may need to reverse the air current for this.

The second area has two such arrow challenges, and a wall blocking each. Throw the new Orichalcum cube into the walls to break them down, then fire Apollo's Arrows to complete both challenges and destroy both seeds. After that, lightly throw the cube at one of the walls and immediately jump after the cube and climb onto it, allowing passage to the next area. Reverse the air current that awaits you there, and glide across to the next section (if you lose height, use Ares's Wrath at the end). Then pull the lever, open the chest, and return to the main square.

End of the Vault

With all four sections of the Vault of Typhon complete, a new path has been formed at the end of the main square. After killing the final wave of enemies in the square, jump all the way up to the top using these new platforms, and you'll trigger yet another cutscene wherein Typhon abducts you, shows off Zeus and Ligyron in a cage, and prepares to fight you - for real, this time.

Typhon has the same moves as before, but each phase of this fight brings new ones. And there are lots of phases in this fight. At the start of each phase, drink a new damage and defence potion, and set to cutting out Typhon's legs from under him, just like before. Use Hephaistos's Hammer as your primary Godly Power, because it has the highest ratio of damage to stun, and since Typhon can't be stunned, damage is all that matters.

The first new move you'll see is that Typhon can plunge his tentacled hand deep into the ground, and cause little tentacles to spring up all around. Stay away from these tentacles. That's all there is to that. He'll also pound his foot against the ground once while doing this, so be careful.

Other new moves at various phases include:

There are a couple more moves, but they're weak sauce. Just dodge what needs dodging, focus his legs with your strongest attacks, and you'll be just fine.

Perhaps it's a little late considering you just completed the game, but have you taken a look at our other Fenyx Rising guides? Perhaps you missed out on some of the best stuff in the game! Why not start by checking out our guide on the Immortals Fenyx Rising map and all its points of interest; or perhaps our list of the Best mounts in Immortals Fenyx Rising!