For all its gore-drenched mayhem, I'm starting to think that Tripwire's co-op FPS Killing Floor 2 might not be the most serious of games. Maybe it's the ridiculous steampunk hats and vengeful zombie clowns that gave it away? Either way, the game just launched its big summer event, and it's bringing a lot of chunky new (and entirely free) content to the game, including a steampunk airship map which plays host to an all-new game mode. Oh, and Claudia Black voices a playable character now. Y'know - her from Firefly.

The headlining addition of the Treacherous Skies update is the Airship map, following on from last year's Tragic Kingdom summer circus map. Rather than just being a horde/survival style deal, it's an objective-based mission with players moving from point to point, locking down areas and completing jobs around the airship to keep it aloft and slightly less overrun by zombie clowns, mutant monsters and a bunch of angry retro-styled robots until it can make a safe landing at its secret island hideout.

The other big deal here is a major new gameplay feature. While previously you picked a weapon and then upgraded in fairly linear style from one gun to the next until you hit your best-in-slot gear for your class, now you can pick a favourite gun and spend your hard-earned blood money on tweaking and tuning it all the way up to the end of the match. This should greatly increase the variety of guns seen in the field.

There's some fun new weapons added to the pool of upgradeable hardware, with four new additions. While you can see them all in the trailer above, the most exciting has to be the Support class' Doomstick, a quad-barreled shotgun, because there's really no such thing as 'too much buckshot' when you're dealing with the undead. My brother swears by the Static Striker gauntlets, though. 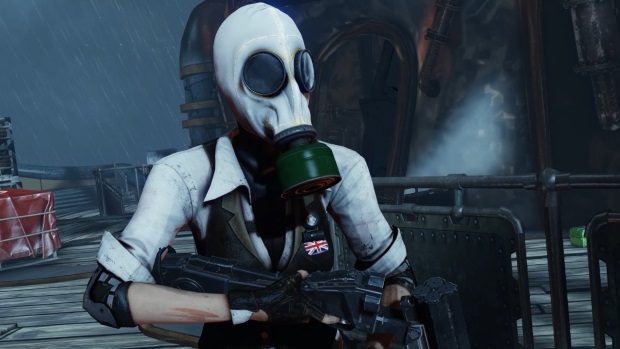 Less important (but I suppose fun for the super-veteran players) is a Call of Duty-inspired prestige system, whereby you can reset your persistent level back to scratch in order to claim special weapon skins. A lot of fuss for very little reward, but when you've already played the game to death, I suppose it looks tempting.

There's also a second new map, Endless Lockdown, created by the community. Oh, and as mentioned up top, the most important addition by far: Claudia Black is now in the game, voicing the gas-masked and very snarky Mrs. Foster, seen above. Is it really worth playing as any other character now? The answer is no, just in case you were curious.

All this new stuff is here to stay, not just for the summer, so feel free to turn up fashionably late to the party. That said, starting today the game is 60% discounted on Steam, bringing it down to £8/$12. For those still on the fence, the game will be free to try from the 14th through to Sunday, June 17th.