Happy Overwatch League stage three, and happy Pride. Both were celebrated in fine form at the arena this week, and while Blizzard could stand to improve how they handle both in many ways, aw, it was nice to see all the excited fan signs and rainbows everywhere. Alongside the festivities, teams were clearly looking ahead as we're now into the final half of the League. And a new stage brought some new faces, and some much-missed ones making a fresh appearance.

Headlining these returnees was New York Excelsior’s star Tracer player, Park “Saebyeolbe” Jongryeol. You’d think this was just in time for Pride, considering Tracer’s girlfriend, but he’s actually shifted over to the inviso-hacker Sombra. (Admittedly, you won’t convince me that Sombra isn’t bi, but that’s not the same as confirmed representation.)

Sombra is creeping into the meta, as I discussed a couple of weeks ago, having been used to great effect by middle of the pack teams like Shanghai Dragons. Until now, she hadn’t broken into the compositions of the top three teams, but New York are clearly shaking things up after being eclipsed by the big two (San Francisco Shock and Vancouver Titans). Their changed roster seemed somewhat shaky at first, with the low ranked Houston Outlaws taking them to five maps before eventually losing, but after a couple of days’ additional practice Saebyeolbe seemed much more comfortable on his new hero and the team wiped last year's champions London Spitfire 4-0. 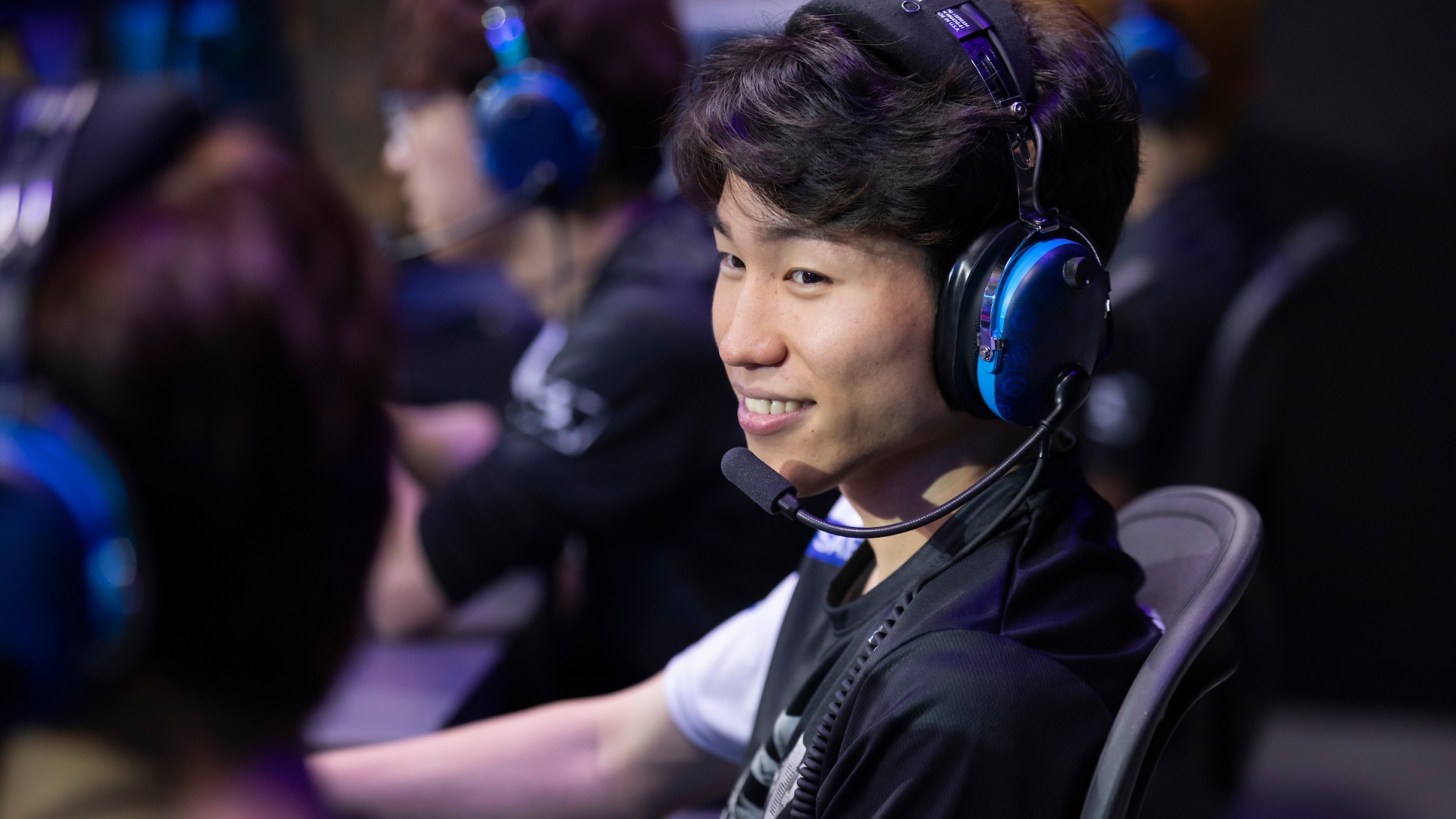 Spitfire, incidentally, are capitalising on the fact that Hangzhou Spark opened the pink floodgates. Some teams have unveiled alternate style jerseys this week, and Spitfire’s is a lovely pale rose. Spark themselves have gone for a mainly black look, presumably for fans too cowardly to sport the pink alone. It’s still one of the nicest, though, especially considering Toronto Defiant’s which has the word “six” in multiple languages – except that the non-Latin alphabets seem to just have the sound spelled out rather than the actual word used for the number.

Back to teams, New York weren’t the only team to shake things up. Guangzhou Charge debuted Charlie “Nero” Zwarg, who showed great promise in their game against Chengdu Hunters, which Charge won 3-1. Guangzhou then stumbled against Seoul Dynasty, who managed to successfully play two entirely different rosters in a single week. In their first game, they gave the stage to two new players, Lee “Highly” Sunghyuk and Park “Illicit” Jemin, before reverting back to older faces like Ryu “Ryujehong” Jehong for their second. Both teams seemed strong, handily winning their games 4-0 against Florida Mayhem and Charge, so it'll be interesting to see whether and how they continue to juggle 12 distinct competitors.

This first week in stage three saw other changes, too. While San Francisco Shock might have won every single map last stage, Atlanta Reign were determined to put a stop to that before it began. Though Reign eventually lost, they took the very first map by winning Ilios, and managed to hold Shock to a tiebreaker. Shock still look incredibly strong, though, particularly main tank Matthew “Super” DeLisi. He seems to have been taking some notes from his key opponent, Park “Bumper” Sangbeom, on rival top team Vancouver Titans. Specifically, notes on how to 180-degree Earthshatter.

Also new since stage two is the Havana map. Teams are still in the process of figuring out the best way to approach the payload push, which is good news for people who are trying to avoid watching Goats compositions. Damage dealers abounded, for example, as Seoul Dynasty brought out two snipers and the rocket queen Pharah against Mayhem’s Widowmaker, Mei, and Bastion. Other teams did default back to the three tanks, three supports standard, like when Dallas Fuel played Washington Justice, but Havana seems to lend itself to a unique strategy of camping so close to the spawn doors that the attacking team can barely reach the payload, making for some intense first clashes.

And while it’s not strictly new any more, Shanghai Dragons doing so well is still fresh enough to feel lovely. Admittedly this week they only played against the struggling Los Angeles Valiant, but they’re getting in some nice little plays that put them over and above many other teams, like paying attention to when a late swap leaves a Zenyatta alone and easy pickings.

And besides, Los Angeles Valiant aren’t struggling so much anymore! They beat Chengdu Hunters 4-0 in their second match of the week. (It’s the power of adding Pride patches to their kits, I tell you. The same thing happened last year.)

Next week, they’ll face off against Charge, while Shanghai will have the chance to prove themselves against Atlanta Reign. Since Reign seem to exclusively beat top teams and lose to lower-ranked ones, it’ll finally shake out where Shanghai belong. Seoul, too, will match against Reign, as well as Shock, so it’ll be interesting to see which of their teams they bring along to each match. Shock themselves will have a chance to show up New York, not by playing them, but by playing the team that took them to the tiebreak this week, Houston Outlaws. It seems unlikely that Outlaws will be able to repeat that performance against San Francisco, but you never know. If Valiant are climbing the ranks, they could be too.

Until then, here’s why you never give up on the final fight until it’s absolutely over.