Imagine it’s 1993. You were up late last night working on your ongoing Dungeons & Dragons campaign. You’re sitting behind a DM screen, waiting for your players to show up, miniatures and maps and notes arrayed in front of you. Then they come in, sit down, and all they want to do is play this weird new card game they’re suddenly obsessed with.

It’s all your players want to talk about or do. One of them mentions how much they spent on several boxes of the stuff, but you’re sure you heard the number wrong. It’s apparently called Magic: The Gathering. Magic is the ur-trading card game, both originator and most successful example of the genre. But its history with video game adaptations doesn’t really match the endurance of the cardboard original.

Digital card games exploded in popularity with the success of Hearthstone, doing things Magic's cardboard-bound form couldn’t. Magic: The Gathering Arena, a free-to-play Magic video game adaptation that went into open beta last year, is in a strange position. It’s an attempt at translating the game from tabletop, where it dominates, into a digital CCG that has to compete with games like Hearthstone and even appeal to their audiences, who may only be vaguely aware of Magic.

Before Arena, we had the Duels Of The Planeswalkers series (fun, approachable games that only contained a small subset of what Magic had to offer), and still have Magic: The Gathering Online (a dry, unapproachable digital representation of the tabletop game) . Arena aims to be an “authentic” digital version of Magic while still being attractive to newcomers. 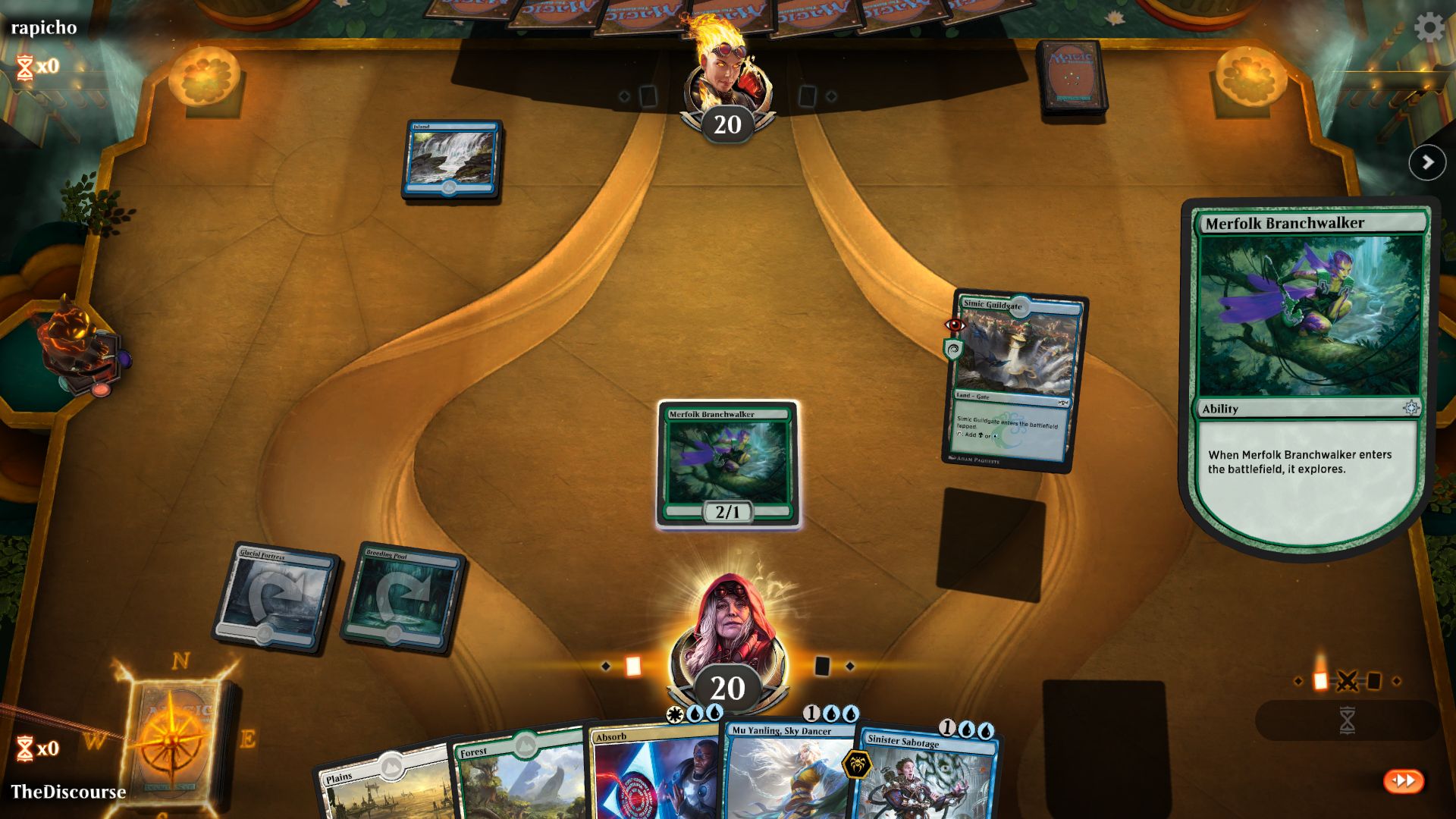 It somehow manages this. Digital Magic always struggled with the game’s timing system, which allows players to respond to virtually any action with “instant” cards, but Arena has the best solution to this problem yet. It defaults to not waiting for you to respond unless you actually have an instant speed card or ability to actually respond with, and to only asking if you want to do something at the end of your opponent's turn rather than at every step. Players get a chance to respond without holding up the game, and everyone's time is respected. I can’t overstate how much of an achievement that is in itself. Changes matter because Magic is a whole bunch of complicated little machines that interact with each other to create one giant complicated machine.

As far as simply delivering something that diehard Magic fans already want, Arena does quite well. The question is, though, does it succeed as a game if you’re not already deep down that rabbit hole?

But Magic's daunting complexity is also its greatest allure. Duels was very good for teaching new players the rules and getting them acquainted with the game, but it was a little too simplified, too smoothed out, to really show off what makes Magic unique.

What sets Magic apart is its depth and willingness to deviate from the resource-trading game that underlies most CCGs. Sometimes a game of Magic is a protracted scrap where players trade resources until they’re both empty-handed, each one drawing from the top of their deck to see who finds a way to win first. Sometimes it looks like two people doing complex but seemingly unrelated rituals. Sometimes you die with a hand full of cards and a ton of resources still in play. I’m still frequently surprised by Magic because the way things play out in an actual game is utterly novel, or because an opponent is doing something I didn’t realise was possible. 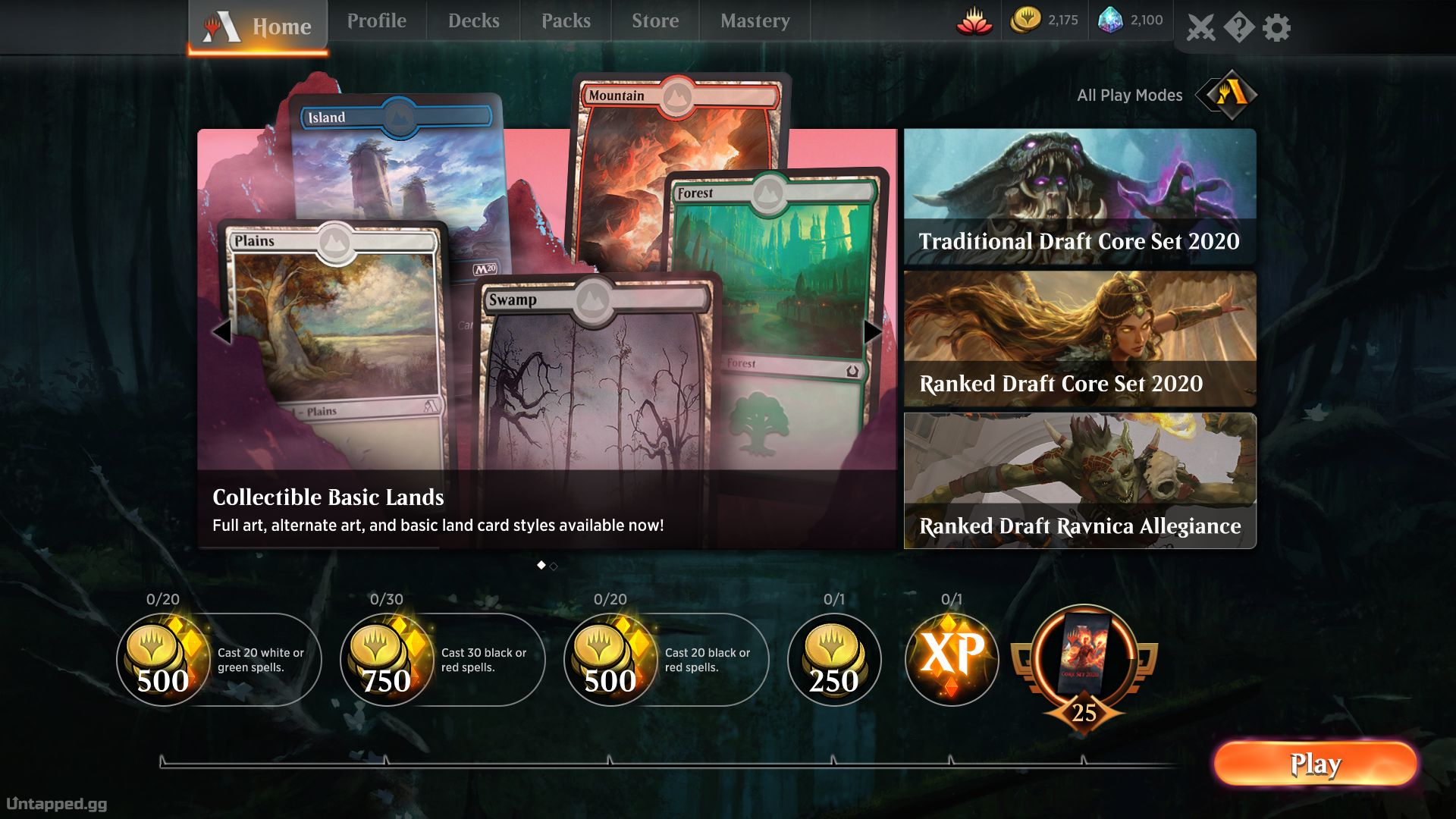 Magic is a game everyone should have a chance to experience, and a big task for Arena is to be that way in for them. And to its credit in this area, it features everything you’d expect from any other digital CCG: an extended tutorial to cover the rules and intricacies; jumping into a game is quick and straightforward; you can play casually or on a ranked ladder; when you play a giant rare dragon card, the dragon animates and flies around the battlefield, threatening to set the cardboard alight. You know, the usual. And, also as you'd expect, Arena has its own backstory.

Magic is set on a multiverse of distinct worlds, each one with its own fantastical lore and visual identity. Arena works hard to get that across without letting the flash obscure the substance. It’s a livelier experience than most CCGs, and is clearly designed for PCs. While many CCGs are popular on mobile, it’s hard to imagine playing Magic on a small screen. There’s no real cap on how many things can be in play at once in Magic, and Arena takes advantage of larger screens to gracefully keep everything in view.

So far, Arena is looking like a fantastic game for veteran players and newcomers alike. But it’s impossible to talk about Arena without bringing up the game’s economy, which is by far what raises the most questions.

Magic Online has its own, parallel, virtual card economy. Online cards can be traded between players, for other cards or other game objects like sealed card packs, or “event tickets” used to enter tournaments that act as unofficial currency. It's impressive that Online reproduces the experience of playing paper Magic right down to tournament prize structures and the secondary market. Having originated long before anyone heard the term “microtransaction,” Online also backs up its virtual cards with real cardboard through a card redemption scheme. 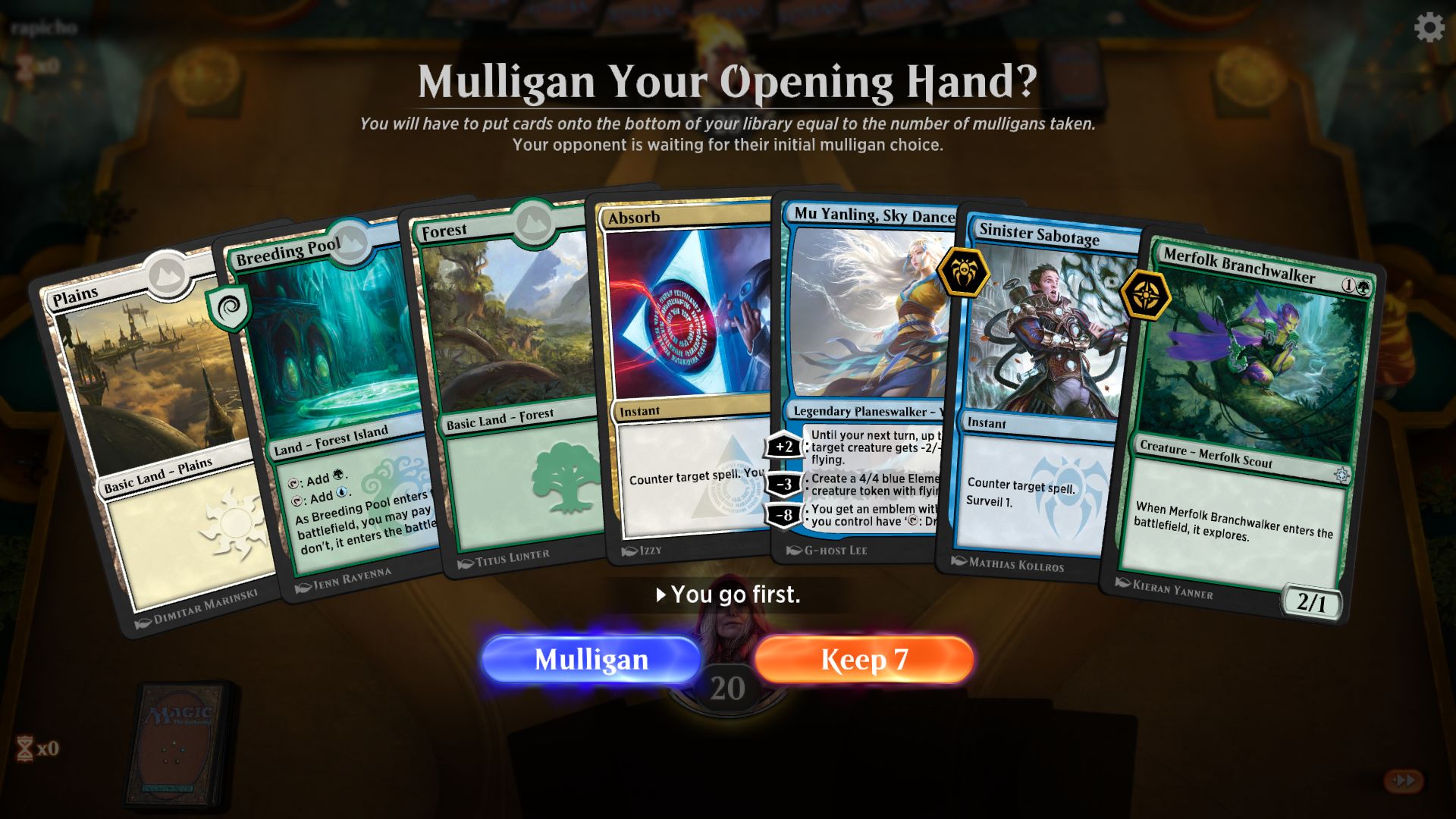 Arena doesn’t have that. Instead, it operates like any other digital CCG. As mentioned, free-to-play up front, but with your typical dual-currency system: gold earned in-game, and gems bought with real money. One specific kind of ranked event can be entered with gold and pays out prizes in gems, allowing for (slow) conversion between the two currencies, but unless you have a lot of free time and are very good at the game, serious play will probably compel you to spend money.

Arena has no card trading, and neither can you break up unwanted cards for new ones. Instead, some random card packs, which can be bought with either gold or gems (though only the latter give discounts for buying in bulk) will contain “wildcards” that you can redeem for any card of a given rarity; opening packs will also drop a certain amount of guaranteed wildcards. Since you at most need four copies of a card to use in a deck, extra copies also turn into progression towards wildcards. Overall, this system is worse for players who just want to put together one powerful deck and use it to win in the ranked ladder, while being somewhat better for players who are interested in building up a broad collection.

In addition to that, there's a panoply of cosmetic items: variant card backs, fancy premium versions of cards, and now even a “pet,” an adorable fire elemental kitten that sits on the side of the battlefield. You can give him scritches with the mouse while you wait for your opponent to make up their damn mind on their turn. Some of those items are bought with gems, some with gold, and a few are limited-time rewards for events, usually free events. 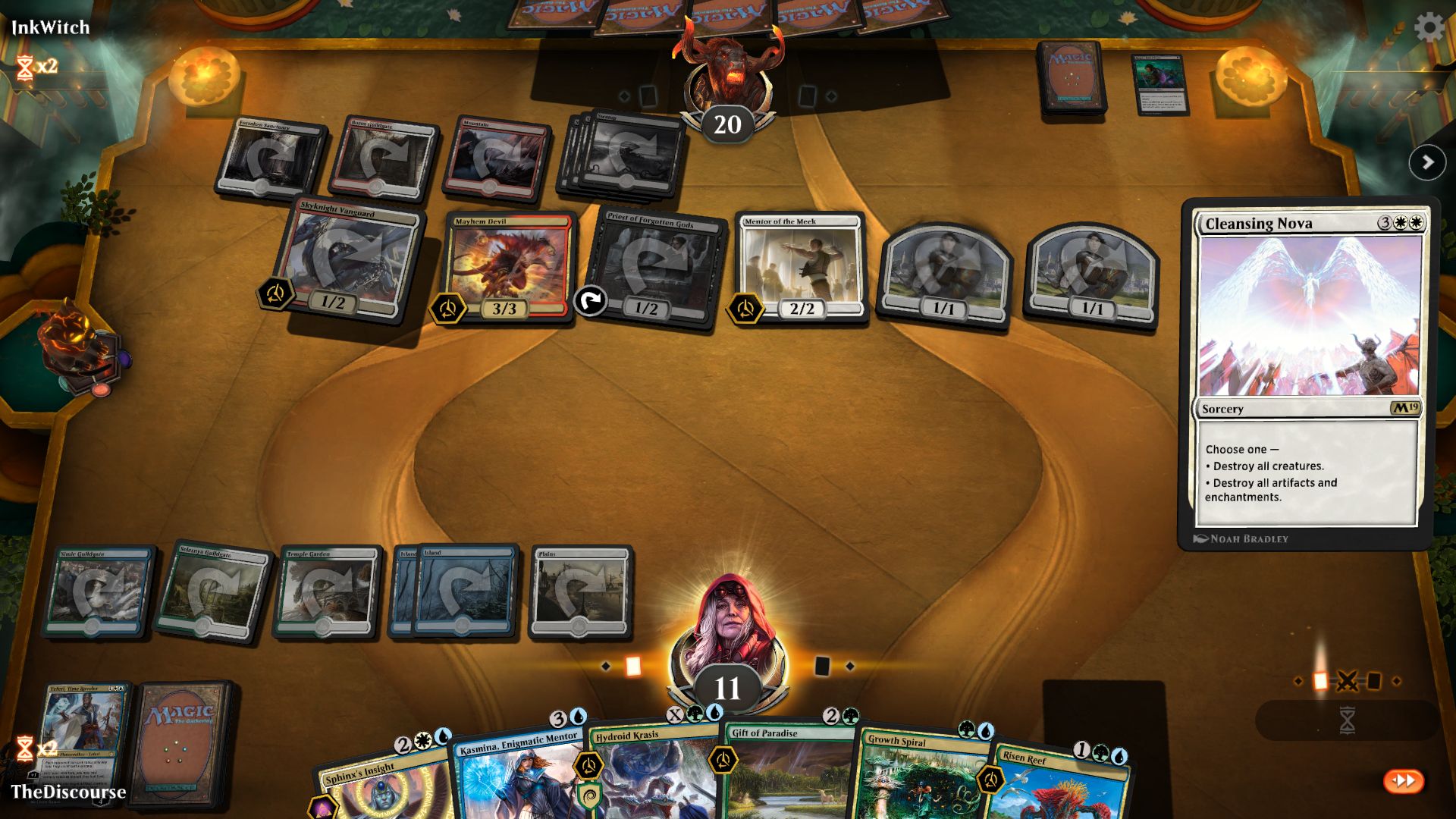 I can’t tell you whether you’d find the game’s monetization scheme palatable. It’s not a money-grabbing dystopian horror like some popular games I could name, but it’s hard to imagine a free-to-play monetization scheme that doesn’t feel rough to exist in. Ultimately, putting together a competitive deck, if that is what you want out of Arena, will probably require spending money. But of course, that was the case back in 1993, too.

Still, Arena is much more affordable and approachable than Magic has ever been. It successfully transforms an arcane hobbyist game into something you can try out and dip your toe in. And, you know, maybe I’m just speaking from the inside of a deep pit of obsession with Magic as a game. But it’s a pretty cozy pit.