All of the large enemies seen thus far in Monster Hunter: World have been land-walking or flying monstrosities. Jyuratodus is your first aquatic monster, though technically it is able to walk on land as well. In fact, it's only one of two that use liquid-terrain as a form of getting around. It is another creature that can use mud to change its weaknesses, so this guide will go over how to kill it and which elements it is weak to.

Being able to avoid some key attacks is the key to defeating the Jyuratodus in Wildspire Waste, so to ensure that newer players are in the best position to succeed in hunting this giant fish, they should take a look at our Monster Hunter World guide for tips on combat and what to take when hunting this particular creature. 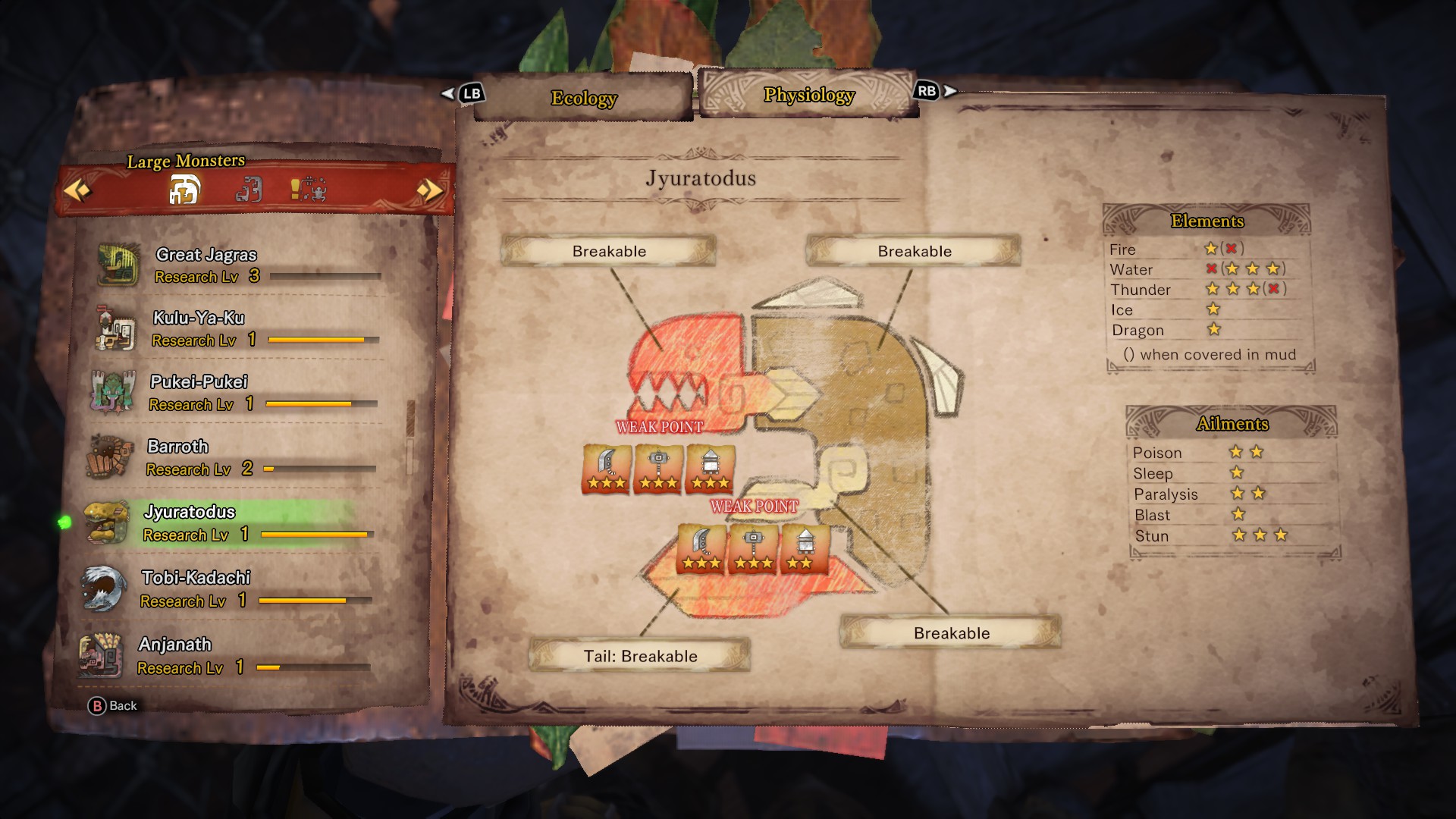 Once again, Jyuratodus confuses things a little bit by covering itself with mud to change its weaknesses mid-battle. You can tell that it is doing this when it does a crocodile-like death roll. When the battle begins, it is weak to thunder, resistant to water, and fire deals normal damage. Once covered in mud though, it gains resistances to both fire and thunder, but makes itself weak to water. Ice and dragon damage will be the same regardless of whether it is covered in mud or not. If you want to remove the mud and have access to guns, shoot at it with the Puddle Pod ammo.

Mud once again doesn't affect status ailments, but the key ones of note are the fact that it's very susceptible to being stunned. Poison and paralysis do fairly well. but it is very resistant to sleep and blast. This might make capturing the Jyuratodus a little trickier, so make sure you have a larger number of Tranq Bombs to hand than you would normally.

Jyuratodus is also the first monster you'll likely encounter where the type of weapon you use matters. Its head, tail, and fins are breakable, with the head and tail being its weak points. Both bladed weapons and blunt weapons will deal the same amount of damage to either part, but ranged weapons will deal more damage to the head than the tail. Since it rarely turns its back though, preferring to take you on directly, this shouldn't be a big factor. I tended to have an easier time with melee weapons however as it renders its blob spitting attacks almost useless. 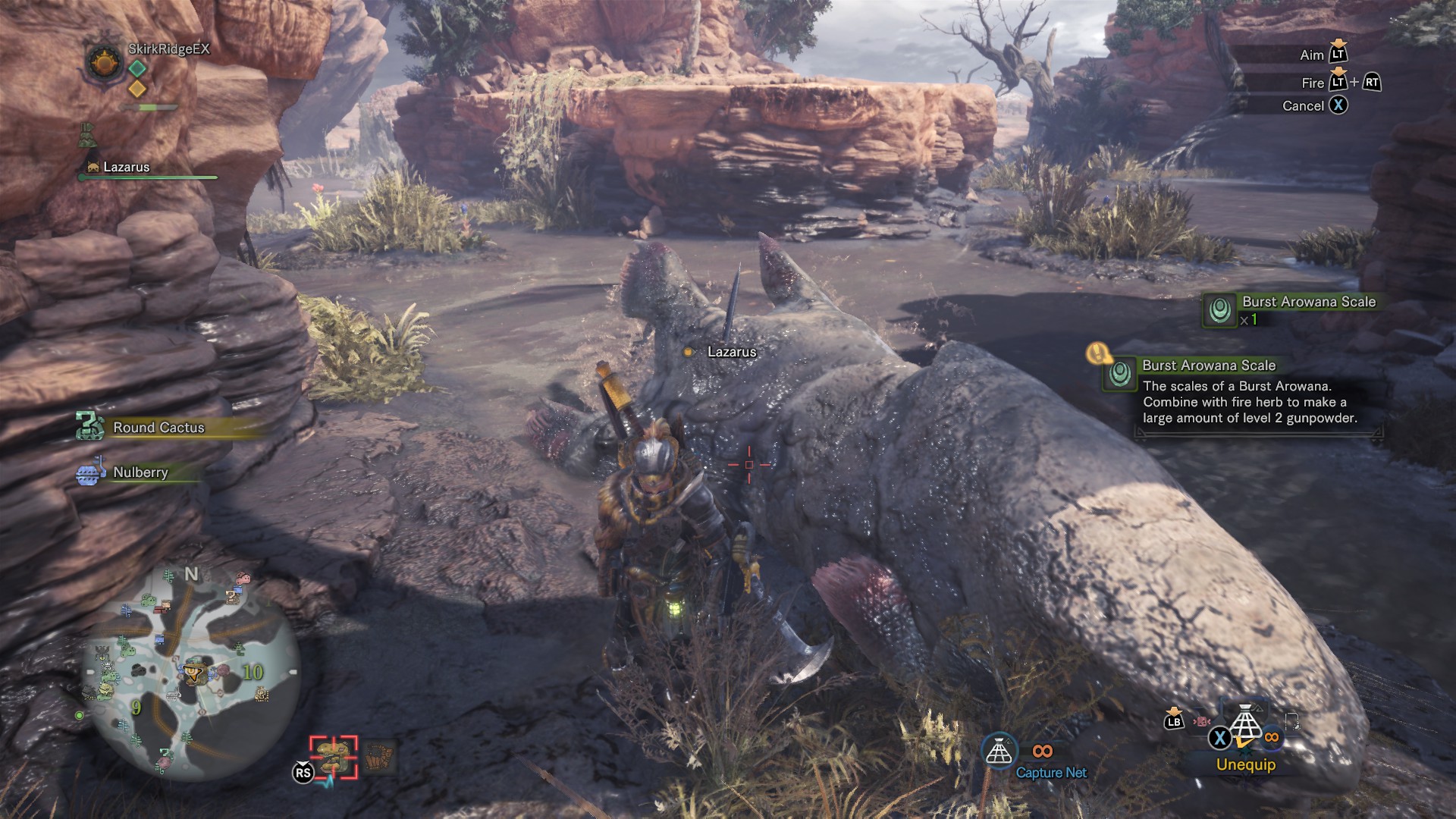 How to fight the Jyuratodus

Where at all possible, try to avoid fighting this monster where there is water. It can submerge itself and will deal the most damage here, while its attacking capabilities on land are much more limited. This is much harder than it sounds, since it gravitates towards any marshy areas of the map and never ventures beyond a certain point, but the water based attacks can also be avoided.

Ironically, its most damaging attack is relatively simple to dodge. It dives into water and swims around to try and ambush you from below. It will give a telltale splash when it's about to surface on your position. If you roll away, it will leap up and land where you were, so you can use this to get a few hits on its head or tail. Trickier to avoid is its charge attack. If you're looking at the monster, it will roar at you before swimming quickly towards you. Again, dart off to the side to avoid it and score a few hits while it finishes its attack.

Jyuratodus can also rear up. When it does this, it will fire blobs of sticky mud on your position. This will slow any movement through it, so try not to get caught up in it as it can attack hunters that are stuck in the mud. This is your key priority for the fight as continuous movement is the key to defeating the Jyuratodus.

At some point during your fight with this aquatic nightmare, it may scuttle off towards an area with a lot of small rocks. These rocks are a great vantage point for leaping onto the Jyuratodus and getting some mounted damage off. It does flail wildly however, so you may find yourself getting knocked off at times. Just be aware of it diving into the water during this point of the fight as it can break the platforms when it leaps upwards. Try to lure it away from the platforms to ensure you still have a vantage point where needed.

Its interaction with other monsters is normally peaceful, until it is either attacked or that monster enters its territory. It also has a friendly relationship with the Gajau - small fish-like creatures that will attack you alongside the Jyuratodus.

What materials can I get from the Jyuratodus?