Monsters in the beginning of Monster Hunter: World tend to be rather slow moving, but the Tobi-Kadachi is the first agile monster you'll likely come across. It has some rather shocking attacks that can easily rip unprepared hunters to shreds. It's also the first monster where weapon types and elemental resistances become a deciding factor into what you bring to a hunt. This guide will go over its weaknesses, how to avoid its various attacks, and ultimately how to kill it.

Found exclusively in a small part of the Ancient Forest, this tree-dwelling monster is elusive and yet potentially deadly if you're unprepared for its various thunder-based attacks. Newer players should take a look at our Monster Hunter World guide for tips on combat and what to take when hunting monsters. 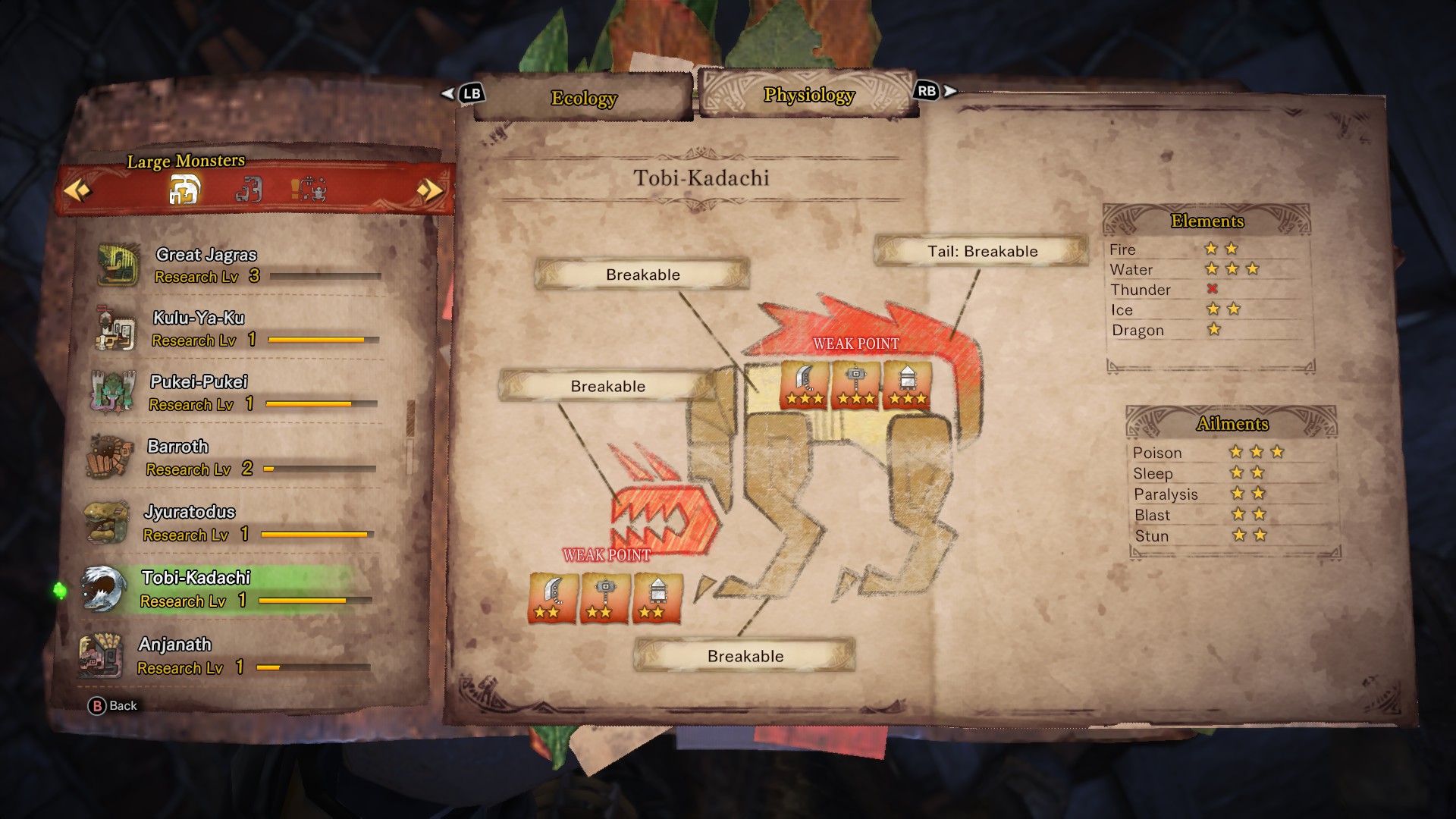 Water is your best friend when taking on the Tobi-Kadachi, so if you haven't already, try to invest in some water-based weapons by killing the Jyuratodus and its Gajau cronies found in the Wildspire Waste. Fire and ice also deal a fair bit of damage, but the Tobi-Kadachi is incredibly resistant to any thunder based damage.

In terms of ailments however, it may surprise you to know that it doesn't have any major resistances in this department, with poison being the most effective. It is somewhat vulnerable even to paralysis, which considering how electric-based its attacks are is a surprising detail.

Tobi-Kadachi can be broken in multiple different places, such as the front claws, back, tail and head. Its weakest point is that risky tail end, while the head is a slightly safer avenue of attack that deals less damage. If you want a slightly easier time, I recommend using a set of Dual Blades or get used to how the Insect Glaive works, since they'll deal quick bursts of damage rather than slow attacks that it can easily dodge. 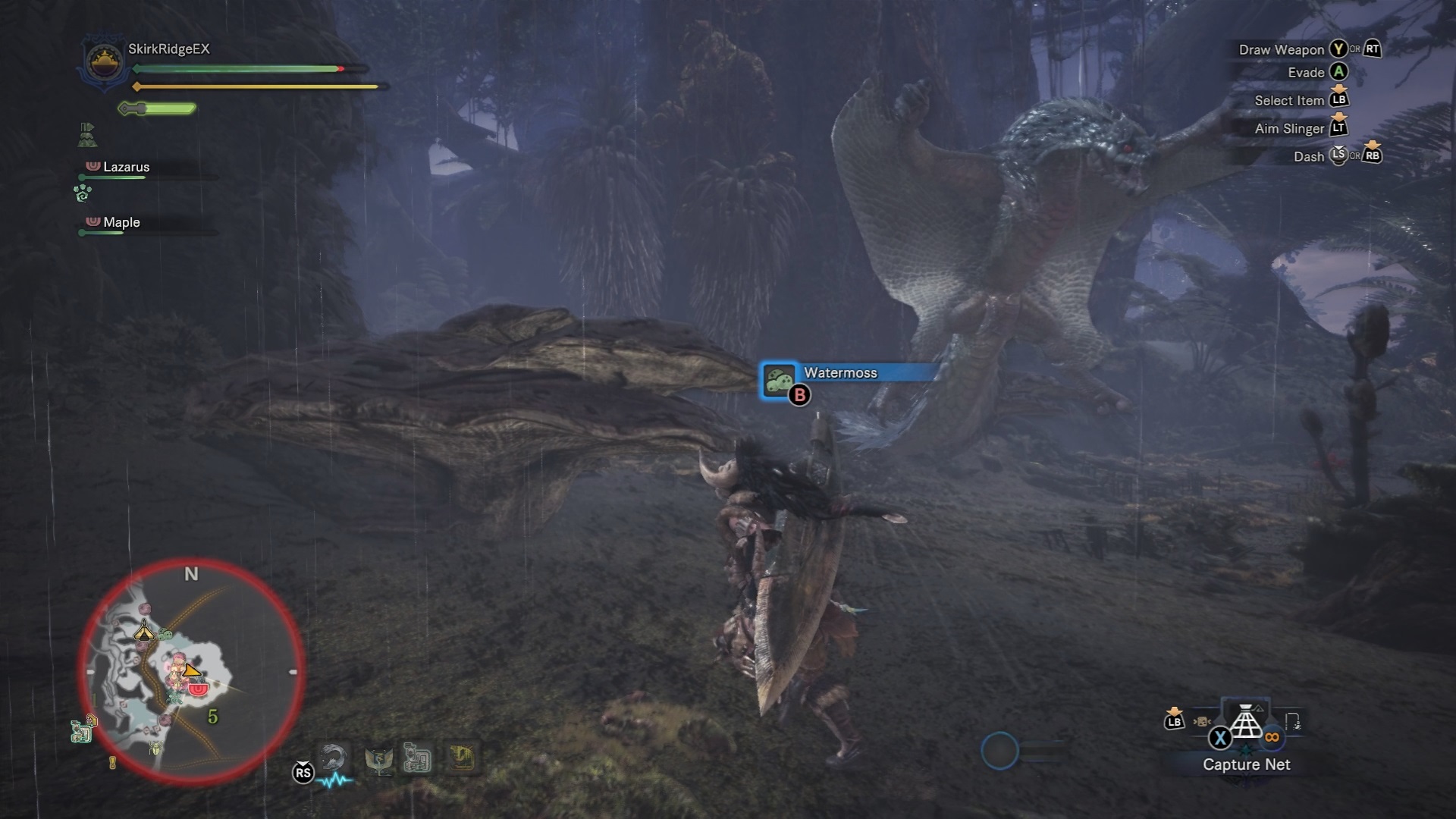 How to fight the Tobi-Kadachi

The first thing you need to know about the Tobi-Kadachi is that it can inflict a status called "Thunderblight". What this does is make a player much more likely to be stunned by any attack. Naturally you don't want to be stunned as this leaves you open to be smacked around some more. In order to get rid of this condition, either consume a Nulberry or roll seven times. Its attacks also deal in thunder damage, so ensure before going in that you have thunder resistant armour. If you need an early-game set to try, the Bone Armour set offers decent protection from thunder.

When you first encounter the Tobi-Kadachi, it will likely be on the treetops. If you see it disappear, it's likely climbed a nearby tree in order to swoop down and attack you. Give the monster a wide berth as it has a surprising amount of reach when pulling off its attack, since it glides for a short distance. However its most dangerous attack is its tail swipe, as this is where you'll likely get Thunderblight. When it turns around, make sure you run far away so that you don't get hit by the tail.

Perhaps the point where it's most vulnerable is in its fake-out biting attack. It will open its mouth, veer off to the side, pause, then try to bite you. When it pauses, roll to the side of it. You'll avoid its jaws and have a good opportunity to give it a good bashing with any melee weapons. If you're fighting from afar, you'll have a lot more time to dedicate to attacking this creature, at the cost of the ease of targeting it.

The best way to tackle this is to utilise hit-and-run tactics in between attacks as it can get rather violent when enraged - this is indicated in the mini-map by a red eye symbol. So keep calm, dodge its attacks, particularly from its tail, and eventually you'll topple this beast.

What materials can I get from the Tobi-Kadachi?