There comes a point in Monster Hunter: World where you'll start to want to bring in other players to defeat monsters as a group, rather than try to kill them on your own. For some, this point will be the Anjanath - a T-Rex with a big snout. While it is entirely possible to defeat this dinosaur without friends, the first time may be a bit on the tricky side without them. This guide will go over its weaknesses, how to avoid its various attacks - particularly its enraged ones, and ultimately how to kill it.

This huge creature can be found in either the Ancient Forest or Wildspire Waste. It may also be the first creature you'll want to bring a friend in to defeat it. For information on how to set up multiplayer, take a look at our Monster Hunter World guide, which also has tips on combat and what to take when hunting monsters. 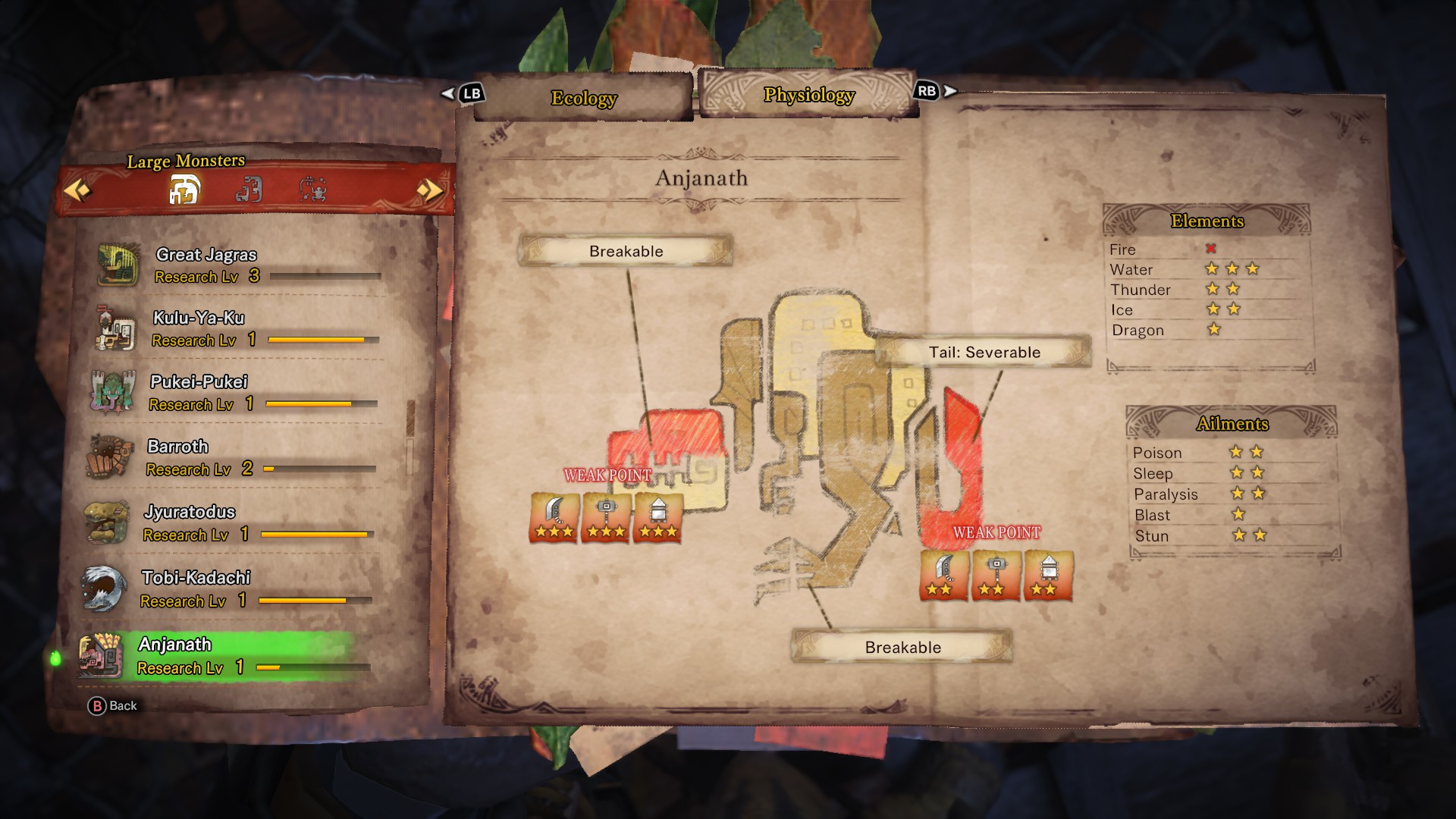 Water is very good against Anjanath and if you created a water weapon to defeat the Tobi-Kadachi, it will serve you well here. Thunder and ice also work relatively well, but really don't attempt to set it on fire as you won't get very far.

Anjanath doesn't have any standout vulnerabilities to any ailments, but attempting to use blast on it would be most futile. Given that it roams wide the two locales it inhabits, there's plenty of opportunity for environmental hazards to inflict a status condition, so always try where possible.

It's also rather resilient, with only three breakable areas. Its weakest ones are the hardest to hit due to its sheer size - the top of his head and his tail. If you can hit its head, aim for the top rather than its jawline. You should also try to hit the throat if is glowing red, as you can get items for doing so. The tail can be chopped off for loot, as well as limiting its range. I highly recommend using quicker weapons against this creature as it allows you to nip in and out, rather than risk a ton of damage from a fiery bite. 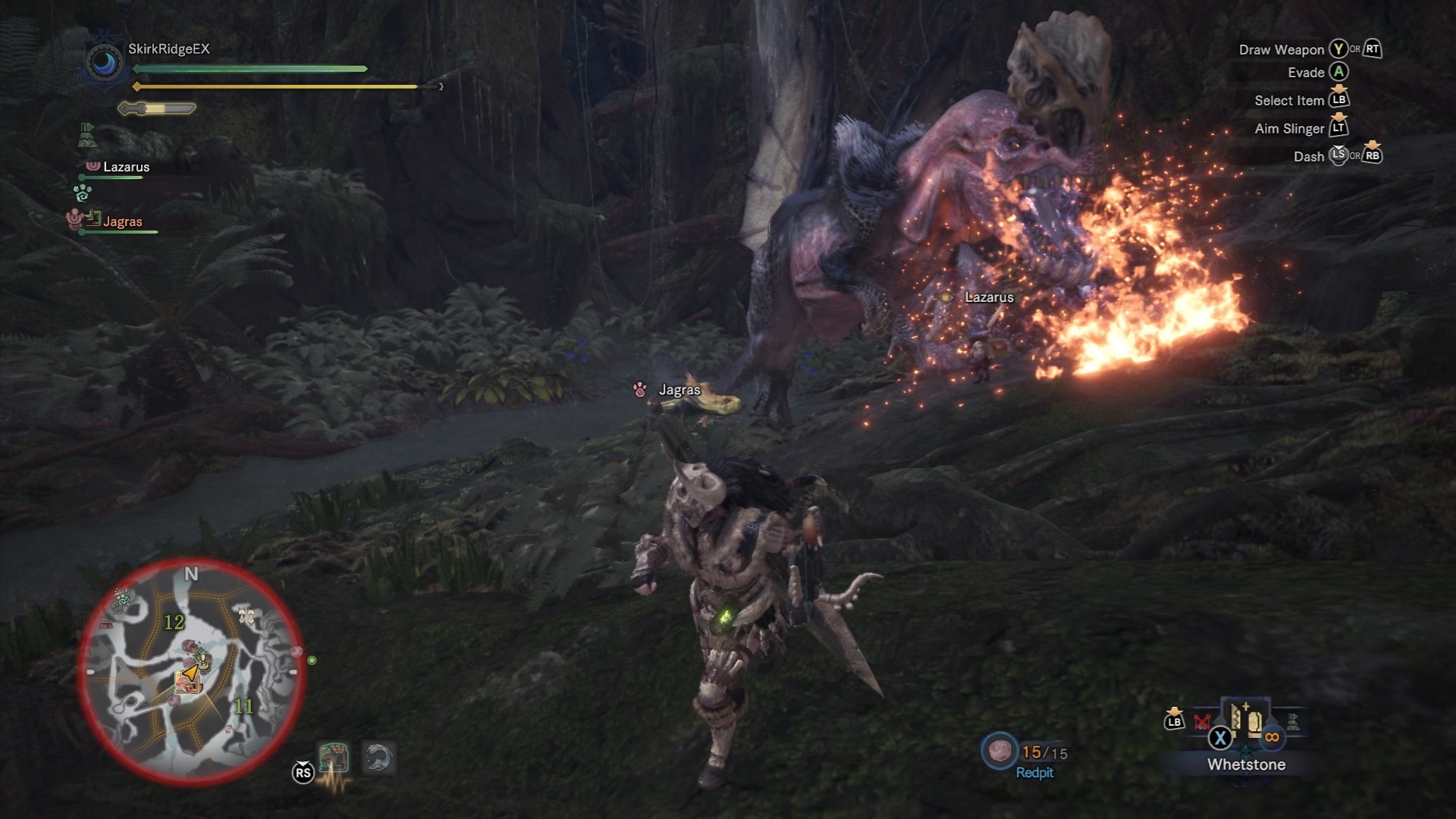 How to fight the Anjanath

Anjanath is probably the biggest challenge yet for hunters to take down. It has got a lot of attacks with very little windup animation, making them harder to avoid. You'll want to primarily stick to the side, avoiding its nudges and kicks where possible, while attempting to attack its head from the side. Facing Anjanath head on is a recipe for disaster as its bite attacks can deal a lot of damage should they hit. Its tail also comes with a vicious tail swipe too, so again only attack when safe.

It's very important in this fight to not get greedy with hits. You don't get a lot of time to attack the Anjanath before it prepares for its next blow, so applying similar hit and run tactics where possible can make the difference. One thing to consider is to use some status inflicting attacks or tools to help you mid-fight, as long as they're not blast based.

The main thing to know about Anjanath is that this T-Rex gets very angry, very quickly. Pay a bit of attention to the mini-map whenever it roars. If there is a red eye symbol, it's best to try and avoid its attacks entirely until it calms down. It can also leap huge distances when in this state, so avoid just running in a straight line.

As it's such a big target, it can be rather slow to flee the scene when it takes too much damage. Therefore a viable tactic is to leap from a high ledge where possible to latch on and deal a potentially significant chunk of damage to it. If you're going to do this, try and break its face first as the snout is where the fire is. With enough persistence, you'll eventually topple this dinosaur.

What materials can I get from the Anjanath?