We go from one dragon-like monster to another one in our Monster Hunter: World guides, as our hero's journey back to the Rotten Vale is impeded by a roaming Legiana getting in the way of your flight path. This chilly customer is a master of all things ice, able to reduce your stamina recovery and leave you vulnerable to its fast swoops. As easily the hardest monster that you fight at this stage of the game in the Coral Highlands, this guide will go over what how to kill it, what its weakness is, and the things you need to be aware of when fighting this dragon.

As the top predator of the Coral Highlands, the Legiana has some rather brutal attacks that can prove a challenge to the unprepared. For those looking to get a bit more on how to effectively manage their stamina bar, head on over to our Monster Hunter World guide to get more tips and tricks for surviving this hunt. 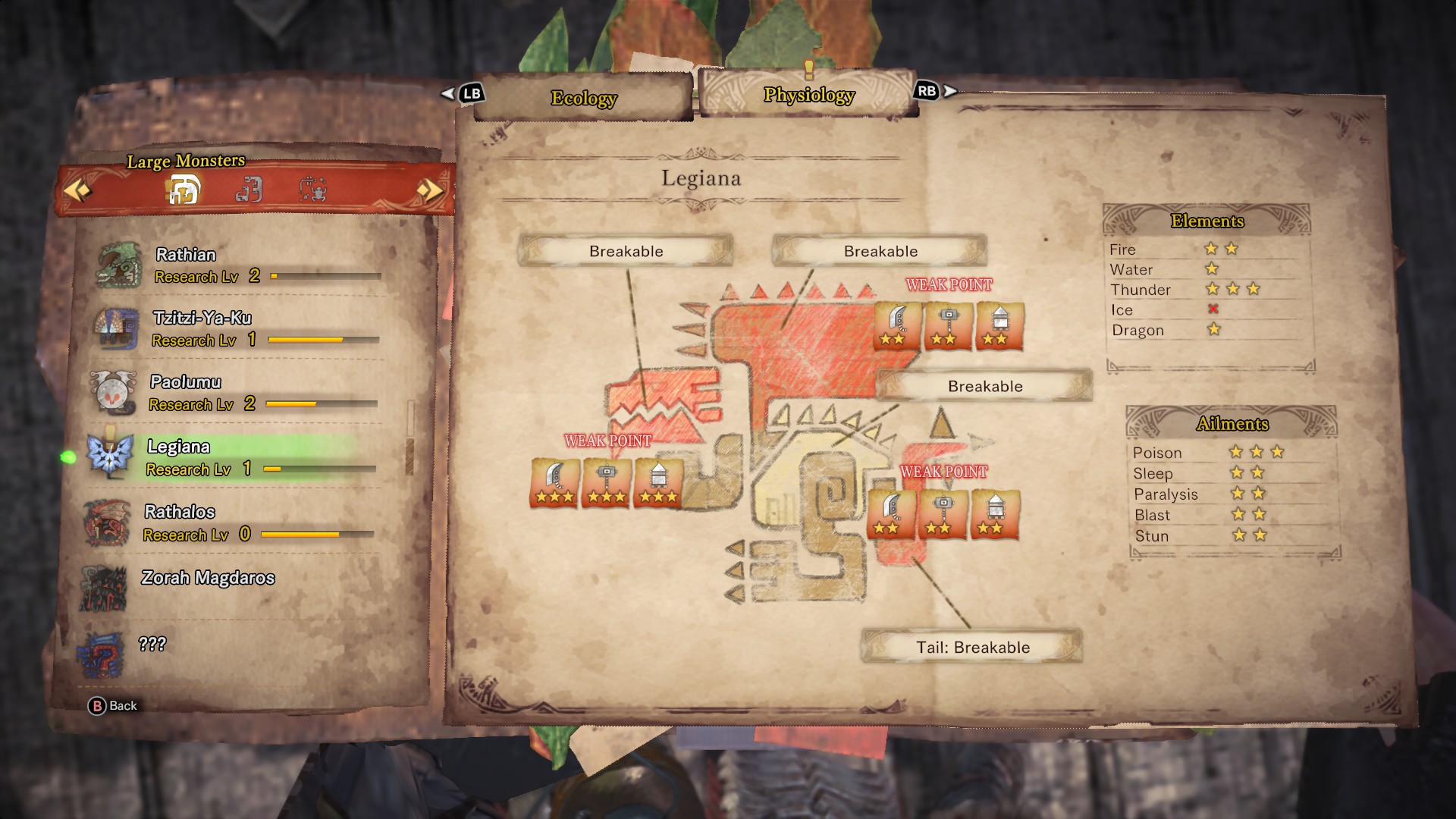 Much like a fair few of the most recent monsters, Legiana is hugely affected by thunder damage, though fire also works in a pinch. None of the other elements are worth bothering with too much, ice in particular thanks to its resistance.

Legiana is however very weak against poison, so any poison-based damage you can do will aid you immensely in this fight. It also has the added side effect of causing its speed to lower much faster than destroying its membrane with any other kind of damage. All other ailments have slightly lower effectiveness, but there's no bad option here.

Breaking Legiana's head, wings, torso, and tail will reap rewards, but the head is its weakest point. No weapon type is particularly effective over the others, so you're free to choose how you break each part of it. Unlike various other dragon-like monsters, the Legiana's tail is unable to be severed, so once it's broken you should aim for the head for better damage output. 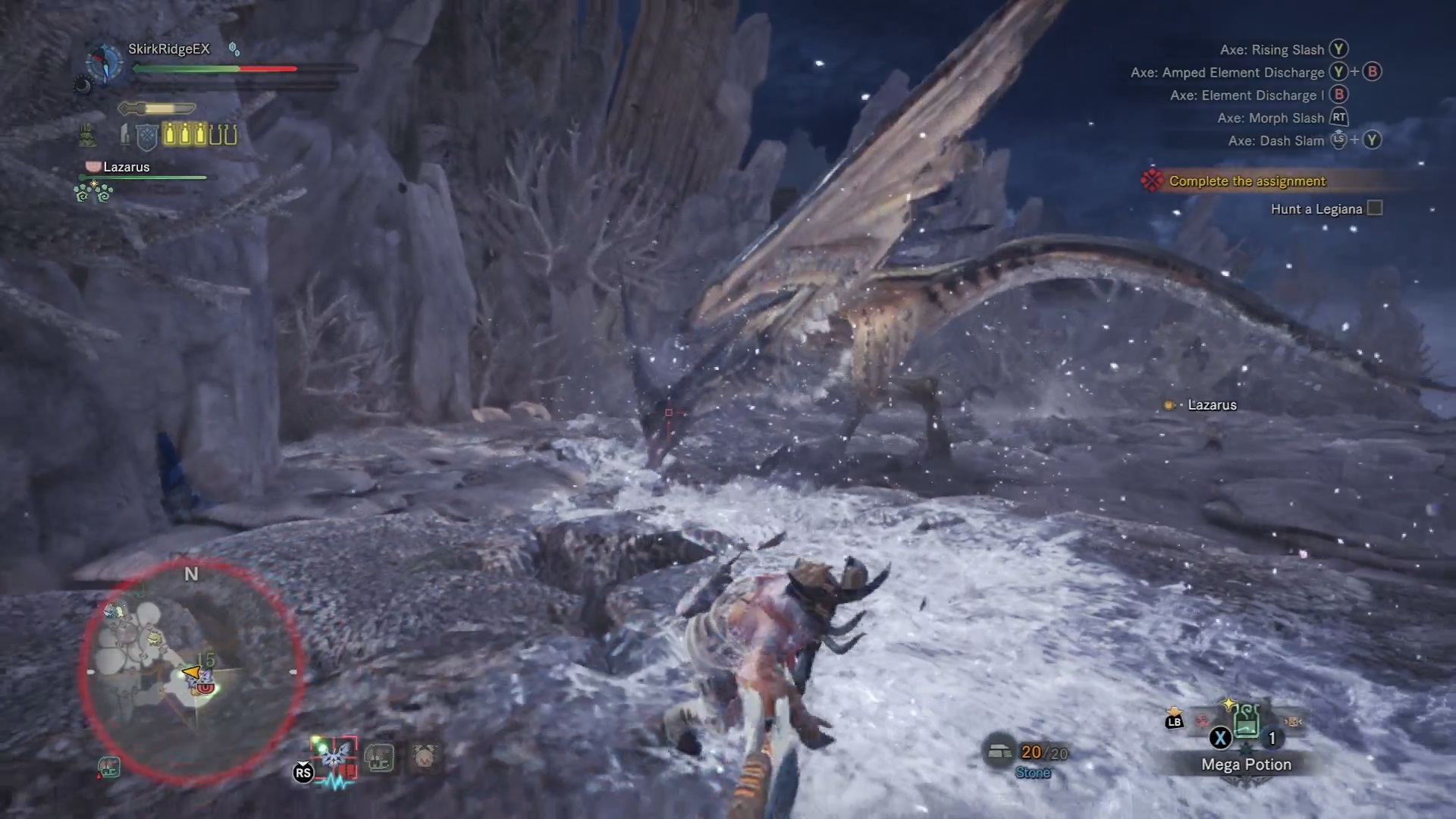 How to fight the Legiana

Above all else, try not to get hit by Legiana's ice attacks as they all inflict a nasty status condition called Iceblight. This increases the stamina cost of performing dodges, jumps, and running by a significant amount. It can only be cured by either waiting a rather long amount of time or by eating a Nulberry.

So what attacks cause this horrible condition? When Legiana is calm, its only really its tail slam that can be imbued with the power of ice, but when it's angry a whole host of attacks gain ice properties. It can breath frost for quite the distance, as well as do an aileron roll with snow particles covering it as it dives at you. This is of course in addition to its various tail attacks that can also cause you problems, as well as its other non-ice attacks.

Any hit from Legiana is likely to deal a lot of damage, as well as inflict Iceblight, so your best bet really when it goes full berserk is to back off and wait for the Legiana to attack your Palico. It'll be distracted long enough for you to land a few decent hits in before retreating, as long as you're not too cocky. Failing that, Legiana is much more manageable when not berserk, especially when it does a similar charging attack to the one Paolumu knows, including the pratfall that leaves it open.

Legiana is really fast, which can cause a bit of a problem when hitting it with slower weapons. A good thing to try is to inflict poison, as not only will it sap its health, it is particularly effective at getting this butterfly dragon to slow down enough to land some hits. Another good strategy to attempt at some stage is to try and mount the Legiana. Since the area of the Coral Highlands it inhabits is covered with vines to climb, you can partially go up them and jump off, landing on the monster. From there, try to hang on for as long as you can, whittling down its defences on its head and torso. It will furiously try to buck you off, but perseverance will land some results, occasionally knocking the best down for a spell.

The Legiana is also the top predator in the Coral Highlands, so be aware that it will kill Raphinos for food, as well as have full blown fights with the Paolumu. Should a Tzitzi-Ya-Ku enter the fray, it may attempt to stun the Legiana, which if successful will give you a huge opening to attack it with a combination of blows.

Eventually it will flee to its nest which is incredibly high up. Making the climb up there as fast as you can can be tricky, including the leap of faith jump that sends you far down if you miss it. Once at its nest though it will be asleep and vulnerable to a capture attempt. Otherwise, it doesn't gain any additional attacks, so just carry on avoiding its berserk attacks and before long you'll have won.

What materials can I get from the Legiana?