A lot of the larger monsters in Monster Hunter: World are required to have been hunted to complete the main story, but there's a few that are optional fights. One of these just so happens to be a Rathian, which can be a nuisance to early-game hunts in the Ancient Forest or Wildspire Waste, but is worth going after to prepare for a later fight, as well as to obtain materials for some really good equipment. This guide will go over what how to kill it, what its weakness is, and the things you need to be aware of when fighting this dragon.

For newer players venturing into the Ancient Forest or Wildspire Waste, they may encounter this monster by accident while hunting other monsters. Hunting this dragon at this early stage is not recommended and thus should be reserved for when your equipment is that little bit better. Head on over to our Monster Hunter World guide to get more tips and tricks for surviving this hunt when you finally decide to take it on. 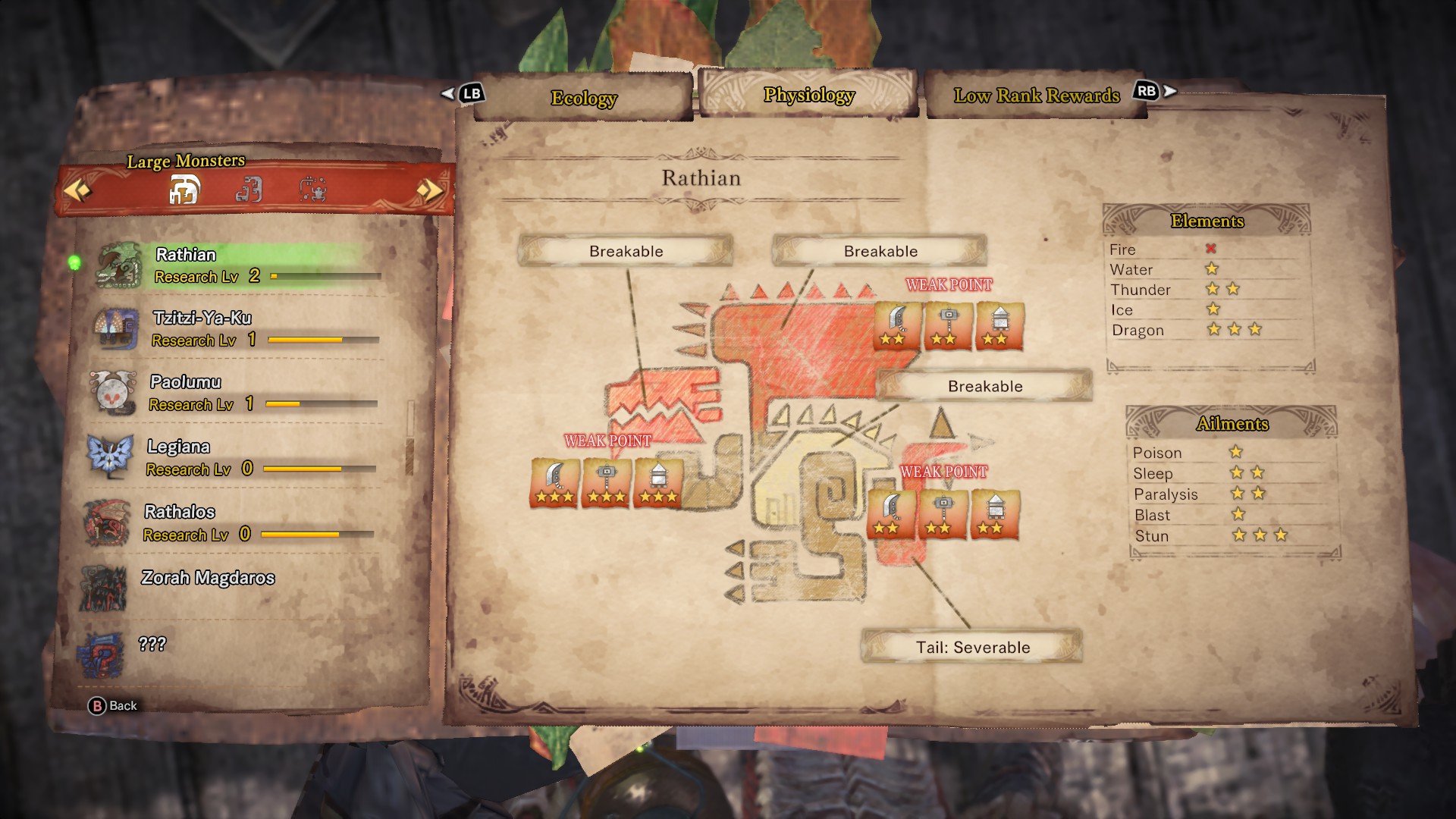 Rathian is very weak to the dragon element, but you're more likely at earlier stages of the game to have access to thunder weapons. Either one will do very good damage to it. Using ice and water weapons isn't recommended and you should absolutely never use fire weapons on this fire-breathing dragon.

It also boasts some big resistances to both blast and poison, however it can easily be stunned. Any attacks that can render it immobile temporarily via stun can make the difference in the fight against this terrifying beast. Any items or skills that use stun to knock it out of the sky are heavily encouraged to bring along.

You can shatter Rathian's head, wings, and torso, while its tail is also severable. Only the torso isn't a weak point as both tail and wings can be hit for decent damage. However the weakest point is definitely the head, which is also where you can inflict stun by smacking it with a heavy hitting weapon like hammers or switch axes. As another flyer, it is worth bringing ranged weapons, however the tail being severable negates the poison within so bladed weapons may be better suited for this fight. 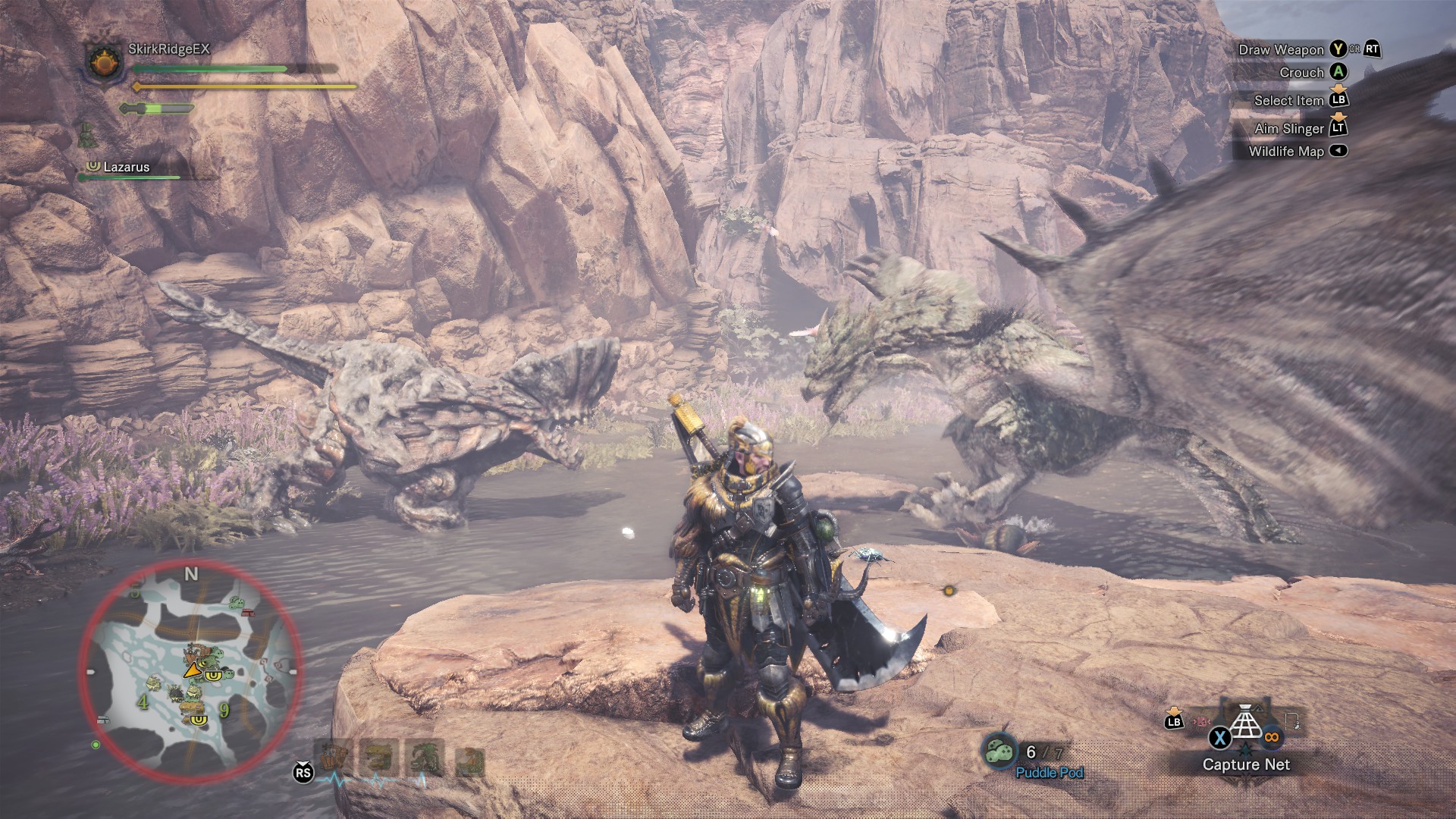 How to fight the Rathian

Rathian is the full dragon package. It can breathe fire and it can fly. As such, attacking this creature is going to be an utter pain to do so consistently. It can attack from both the ground and the air with various tail swipes, bites, and claw swipes. The amount of ways it can dish out pain is staggering to say the least.

Thankfully the geometry of both the Ancient Forest and Wildspire Waste can be used to your advantage, as it's relatively easy to find a vantage point to leap on top of it and start stabbing its head. It will of course try to smash its head into things to try and buck you off of it, but persevering with it and bracing when you can will allow you to use a special attack to deal a lot of damage to its head and potentially stun it for a short time.

When Rathian is in the air, it's a lot more dangerous, especially if you're on the ground. This is where it's most likely to breathe fire, which has a massive range, and being hit by its fire inflicts fireblight. In order to get rid of this condition, either roll three times, roll once in water, or eat a Nulberry.

It can also potentially poison you by attacking you with its tail if it's still intact. Your best option is to keep your distance where possible, or try to find an elevated point that will allow you to mount it in the air. Once the tail is severed, you won't have to worry about the poison status ailment, but it can still deal damage with its bloody stump.

As the key player in the Wildspire Waste, it will also attack other monsters. This can be a double-edged sword as you may find the monster it is challenging is ill-equipped to deal with the sheer power of Rathian, but it can prove a nice distraction for you to launch a surprise attack. If it is looking a bit too busy, you may wish to consider throwing some dung pods at the other monster to force it to flee the area, while you continue to deal with this bothersome drake. As a side note, it will pursue anything that takes its eggs to the ends of the earth, including the Kulu-Ya-Ku that is found in both areas; you can find out how to defeat that monster in our Monster Hunter: World Kulu-Ya-Ku guide.

What materials can I get from the Rathian?