Your first venture into Monster Hunter: World's Rotten Vale is fraught with danger. No sooner than you arrive that you find not one, but two large monsters. The one you'll be fighting though is the more intimidating of the two. Radobaan is a hulking pile of bones that can roll around with careless abandon for your safety. That said, it's only got a couple of tricks in its arsenal. In order to avoid becoming roadkill, this guide will go over what how to kill it, what its weakness is, and just how to dodge it when it rolls around.

More than anything else, Radobaan's got two very high damaging attacks, one of which needs relatively agile movement to avoid. Therefore you should at the very least know how to dodge, so head on over to our Monster Hunter World guide to get more tips and tricks for surviving this hunt. 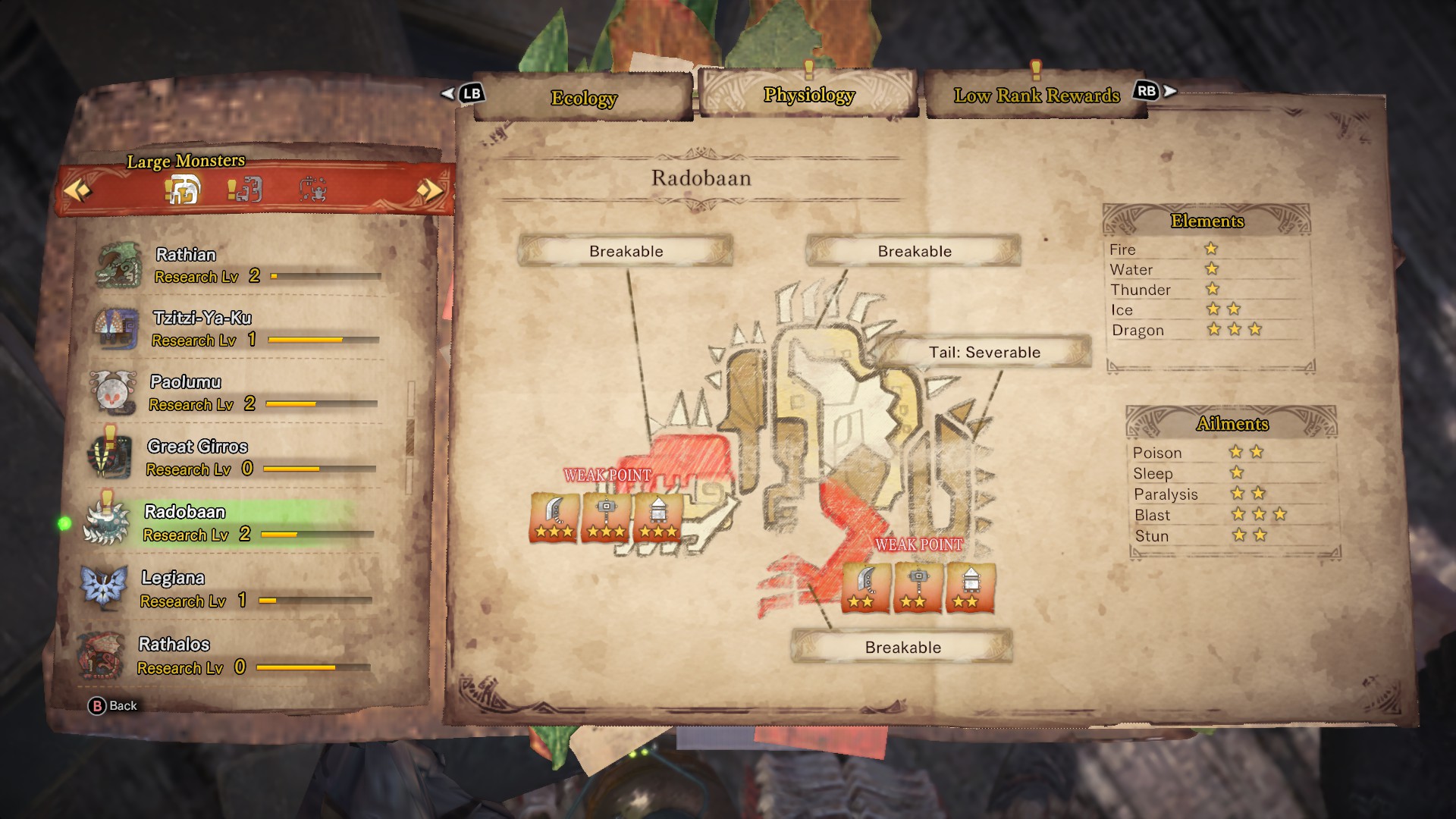 Radobaan's main elemental weakness is dragon, which you may or may not have access to at this point. In fact, ice may also be an element you don't currently have in your arsenal the first time you face it, so damaging this creature is going to be a bit of an ordeal as fire, water, and thunder only have one star.

Things are a little better in the ailments department as using items that inflict blast are the way to go. Other status elements have slightly lower susceptibility, with the exception of sleep. This is because one of its own attacks can inflict sleep on you, so in this case it's better to try and blow it up rather than put it to sleep.

Breakable parts include its back, legs, and the top of its head, while the tail is severable. Its weakest points are its head and legs, though you may find reaching its head to be tricky due to its size. Should you ever get the opportunity to jump on its head, despite its spiny exterior, this is a good way to attempt to break its head. Since you can knock it over mid-roll, melee weapons do this much more consistently than ranged, though there's no bad option for this fight. It also serves as good practice against another similar fight later on. 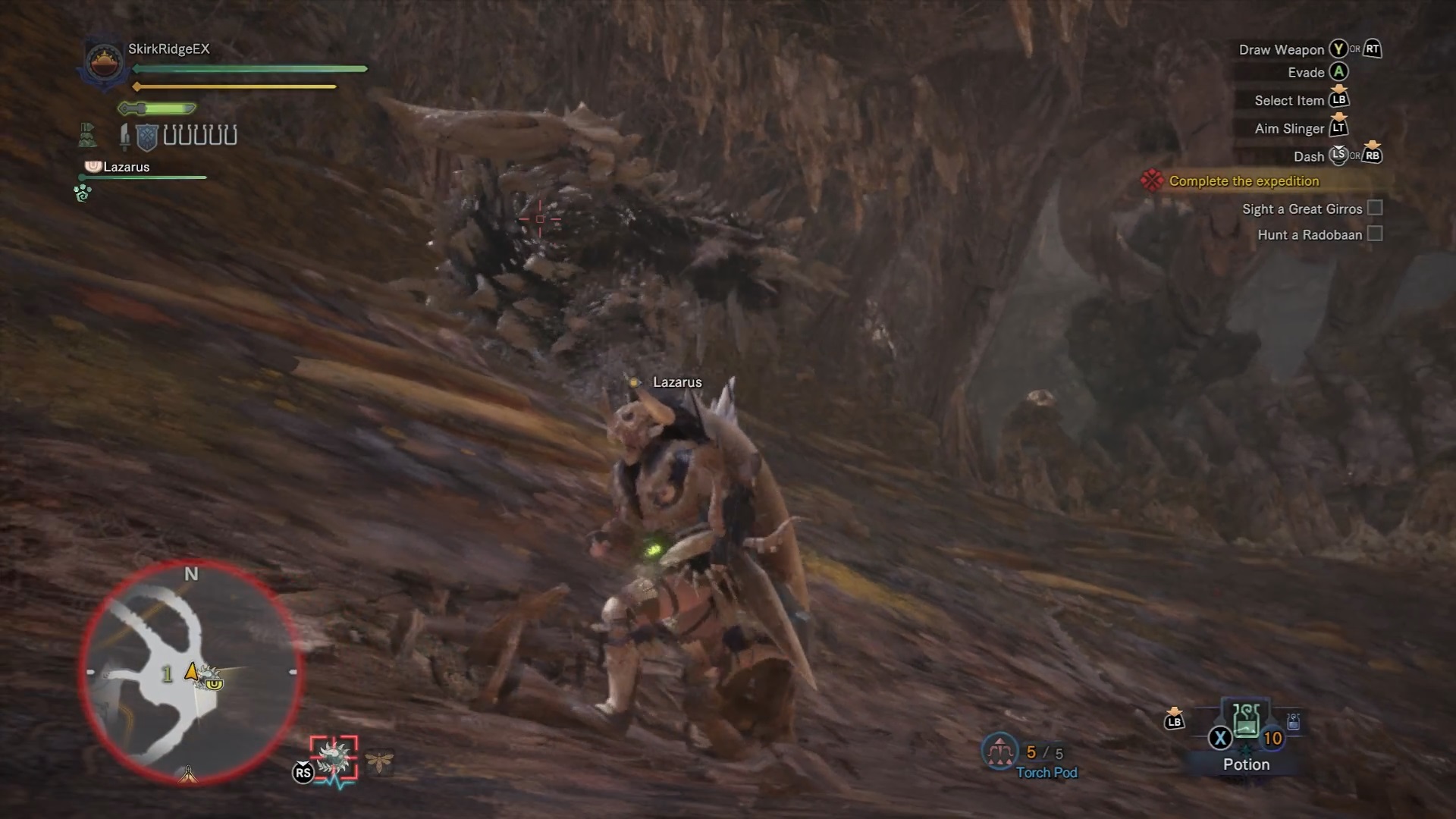 How to fight the Radobaan

So Radobaan has a lot of bones all around it, so the first step to beating it is to get rid of those bones. Concentrated attacks on them with hard-hitting weapons will eventually shatter them, exposing the flesh underneath. Good areas to do this are the legs, head and even the tail if you want to sever it.

Normally, Radobaan is a slow creature that heavily telegraphs when it's about to attack. It has a slam which, while very hard hitting, has a massive windup time that requires it to stand on its hind legs. It also has a vicious tail whip, but again it's very slow to build this attack up, so should be easily avoided.

The sole exception to this is when it's rolling around and you need to watch out for this as it's by far its most damaging attack. Rather than physically using the dodge button, it's better to run at full pelt sideways, ensuring that if it changes direction that you do the same accordingly. Should it get too close though, dodging can help get some distance. It also uses the roll in order to escape to a new area, so be ready to run after it. If you're feeling particularly gutsy, attacking it while it rolls around will throw its momentum, leaving it prone and vulnerable for you to attack it some more.

Once you've dealt enough damage to it, it may return to its lair. Here it will dive into the bone-filled bog beneath it and replenish its armour. In the instances where this is unavoidable, you'll probably need to try and break the armour off of it once more, but it will be slightly weaker than the armour it started the battle with. Either way, stick to the fleshy bits where possible and you should topple this monstrous porcupine.

What materials can I get from the Radobaan?