The good news is that the Odogaron - the next monster found in the main campaign of Monster Hunter: World, can't fly. The bad news is that its attacks are savage, can inflict an even nastier status condition, and the Rotten Vale isn't exactly the most accommodating arena for your duel. Getting over the new status condition even uses a rather unique healing method. This guide will go over what how to kill it, what its weakness is, and the things you need to be aware of when fighting this savage gecko.

This rather feral lizard of the Rotten Vale and Coral Highlands can attack at blinding speeds, as well as inflict one of the nastier status ailments in the game. It's imperative then that you know how to dodge effectively against these brutal attacks, so head on over to our Monster Hunter World guide to get more tips and tricks for surviving this hunt. 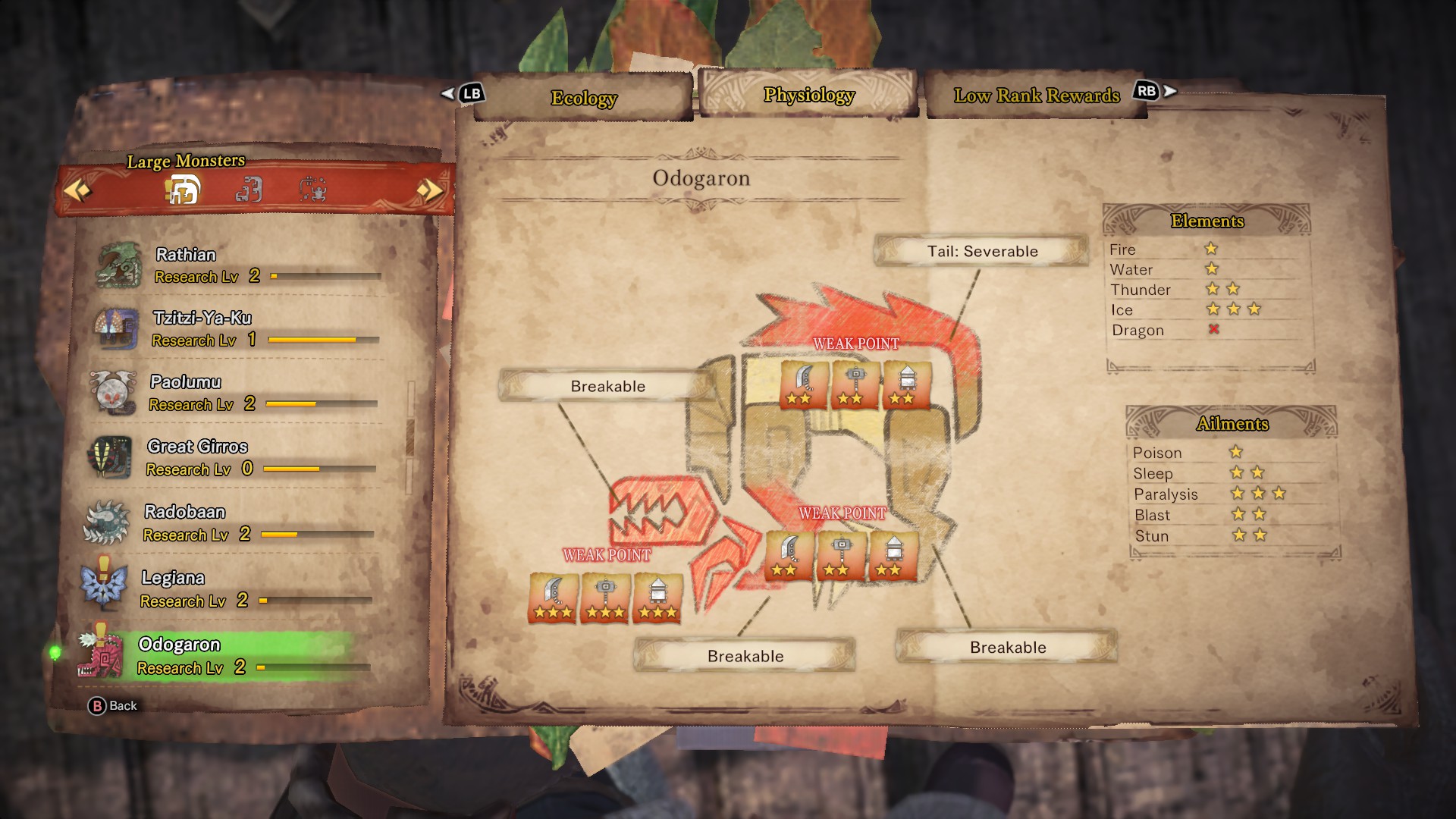 Since you've more than likely obtained some materials from the Legiana prior to this fight, it's somewhat comforting to note that ice is very effective against the Odogaron. That said, the thunder weapon you probably used on the Legiana will still be effective in dealing damage to this boss as well, so it's up to you whether you want to invest in an ice weapon or stick with what you have already. Fire and water aren't especially effective, while Odogaron has a resistance to dragon.

Given that its lair is in close proximity to a bunch of paralysing toads, it may surprise you to learn that paralysis is its biggest weakness. Whenever you get the opportunity to paralyse it, it will more than likely stop it dead in its tracks. Most other ailments are also fair game, but don't try to poison it as it's more likely to poison you instead.

Its breakable parts include the head, front claws, legs, and a severable tail. Its weakest point is definitely its head, though this is also where a lot of its nastier attacks come from. Odogaron is really easy to topple when using heavier weapons, despite no real advantage in damage output overall. When it is down, you can go ahead and wail on the vulnerable parts to break them with relative ease. If you don't want to risk being inflicted with the bleed condition, go for ranged attacks. 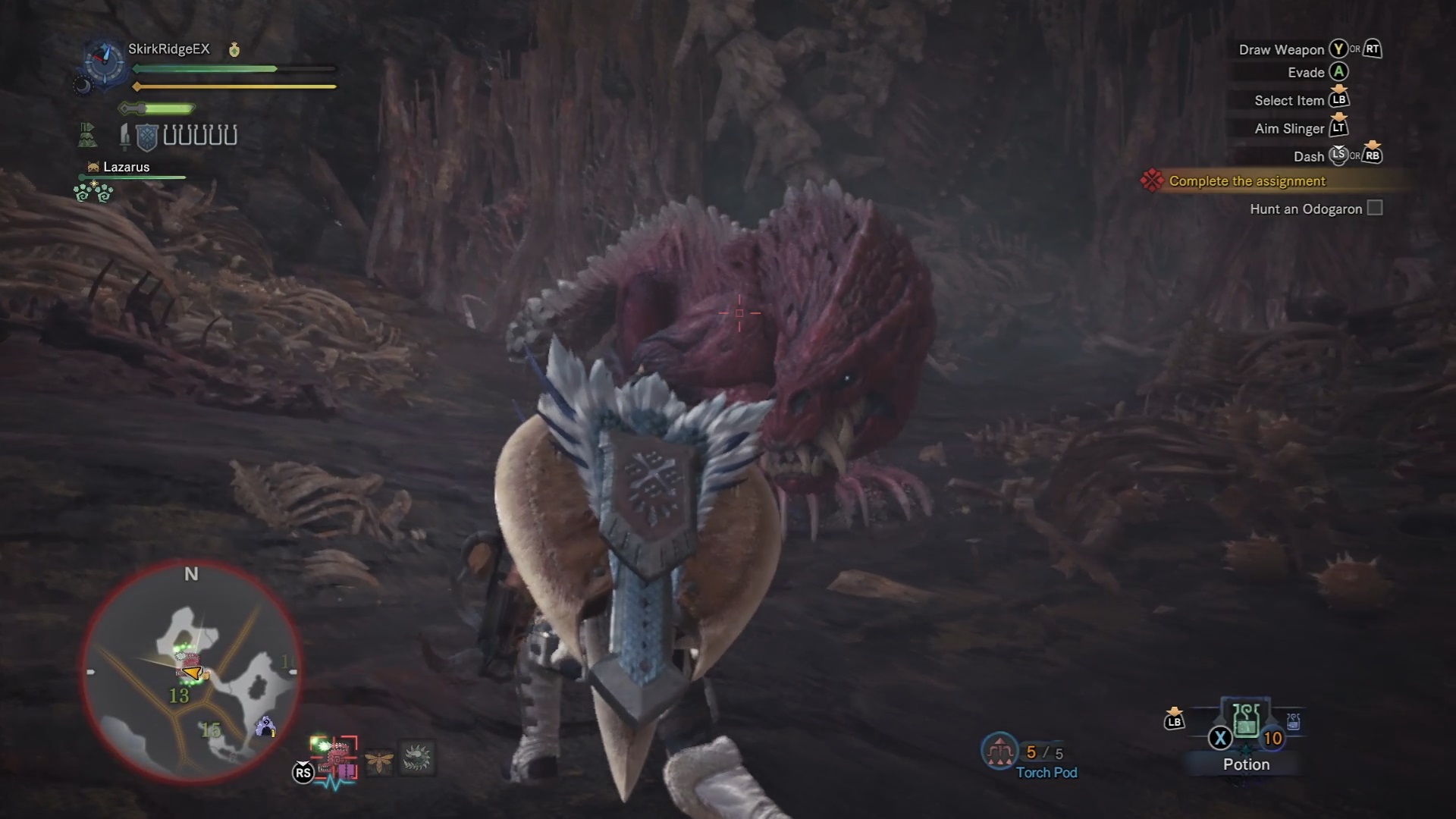 How to fight the Odogaron

The one thing you need to know going in is that you should avoid facing it head on and make sure you always avoid its claw swipes. That's because they inflict a unique bleeding condition that makes it so any sudden movements cause you to bleed out. This includes running, attacking, and dodging. You don't want this, but should you somehow be bleeding out, the only real way to deal with it is to crouch for a short time until the bleed symbol becomes a first aid symbol. Astera Jerky and Sushifish Scale can also cure them, so be sure to take a few with you if needed in a pinch.

Aside from its really brutal bleeding attack, the Odogaron is very agile and able to cover long distances with leaps and dashes. It does hang for a few seconds after each attack motionless, so get a few big hits in before giving it a wide berth, ensuring you're well out of the way of its next attack. It prefers to attack directly, so will tend to telegraph who it is going for by facing that direction. Should it go for your Palico, that's a good opportunity to get more hits in.

Speaking of your Palico, there's a particular weapon you can craft for it that occasionally inflicts paralyse. Should this ever happen, it's a golden opportunity to attempt to break a few more parts of this monster. However once a part is broken, if it is still standing, you should be ready to dodge as it has a unique counter attack that triggers upon the breaking of a part.

Perhaps the strangest thing about this fight if you're fighting in the Rotten Vale is that the nearby area close to its lair is filled with paralysing toads. You can lure Odogaron close enough to attack you, then trigger the toad before dodging the subsequent paralysing cloud. You should see it become badly affected and open to punishment, so feel free to smack it around at this state. In the Coral Highlands there's no such luck, so be sure to bring some paralysing items to stun this beast.

What materials can I get from the Odogaron?

It's a bit of a shame that the bleed status condition is unique only to the Odogaron itself and doesn't apply to weapons and armour you can craft, but the gear that this monster gives is some of the most sought after for those who are still in the main campaign. Some items are more likely to appear once you've captured this monster, more on that in our Monster Hunter: World capture guide. For more on how to use these items, you can either check out our Monster Hunter: World combat guide or our Monster Hunter: World armour guide. In the list below, the stars indicate the frequency in which the item in question will drop, as well as details on whether some items are obtained by breaking a specific part of the monster.