Early on in Monster Hunter: World, you will come across a flying monster that has a few nasty, poisonous surprises. This highly aggressive creature can cause all sorts of problems if you're unprepared for what it can dish out, with one attack in particular only really happening once in a blue moon. This guide will therefore go over its weakness, how to kill it, and how not to get poisoned by its toxic attacks.

Things are beginning to ramp up a little bit now as this monster found in the Ancient Forest introduces poison into the list of things to consider. It's still a relatively weak monster compared to a lot of the others, but being prepared is a key thing here. New players should take a look at our Monster Hunter World guide for tips on combat and what to take out on a hunt. 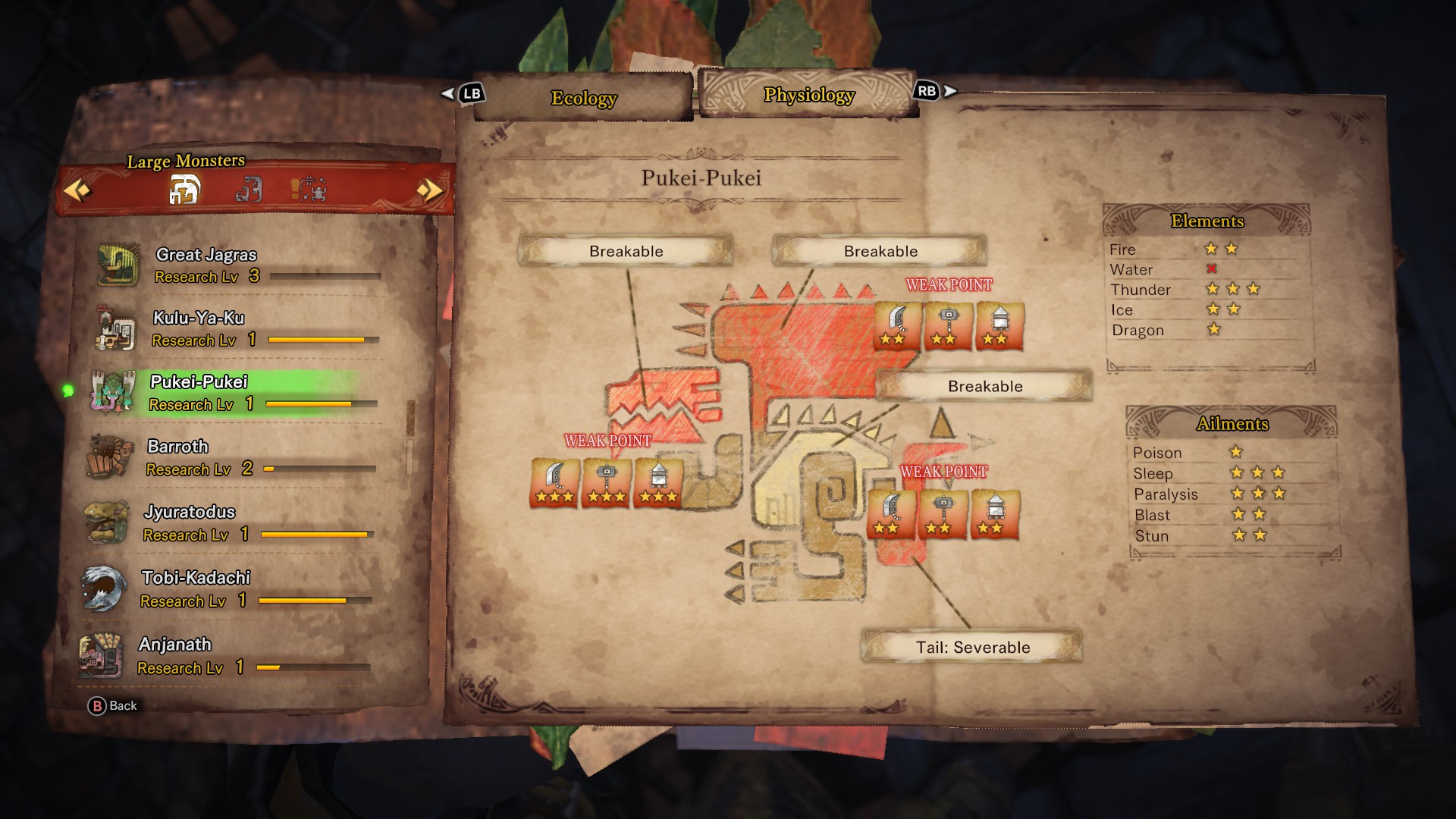 This creature's got a major weakness to thunder and it's highly advisable that you bring a weapon of that element into this fight. That is because it has a resistance to water, but also reduced damage that it would take to other elements compared to thunder. It is also the first monster you'll come across with a resistance to an ailment. Because of its one star on poison, it's unlikely that you'll ever be able to whittle down its health with poisoned attacks, so don't bother trying this strategy. However to compensate for this, it is very likely that it can be either paralysed or put to sleep. It can also be blasted and stunned with relative ease.

The Pukei-Pukei has several weak points, namely the head, wings and tail. These can be broken, in addition to its back, but the Pukei-Pukei is the first monster you'll encounter where you can chop off its tail for extra loot. While the head is the most vulnerable to damage, hacking off its tail ensures it won't be able to tail whip behind itself, so try to have a bladed weapon on hand. As one of the first flying monsters, it's a good test to see just how effective ranged weapons can be, but there's no wrong choice for taking on this venomous beast. 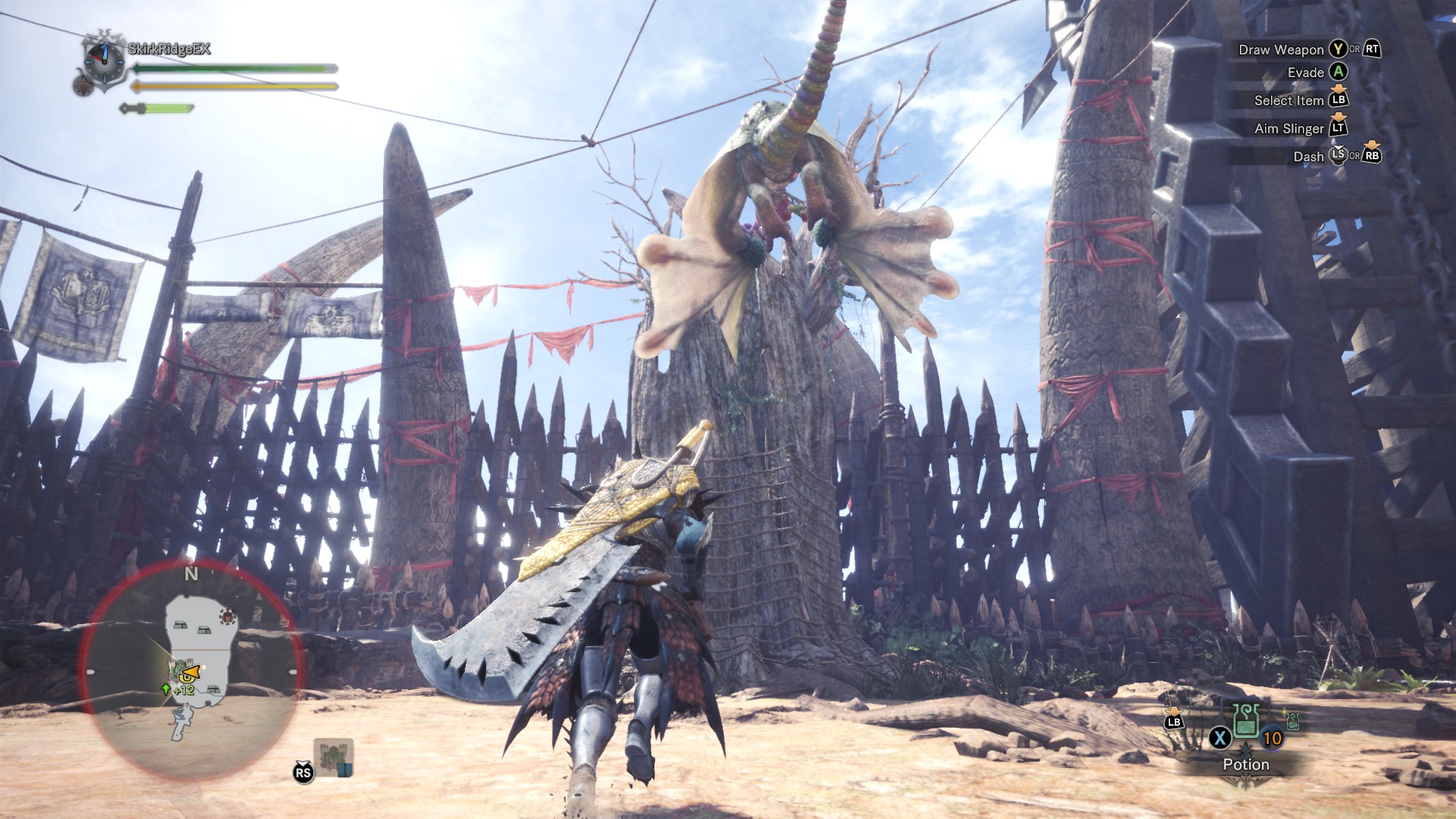 How to fight the Pukei-Pukei

Pukei-Pukei is a rather apt name for this monster as its main method of attacking is to spit poison at range. It's therefore essential that you prepare in advance and bring along some antidotes or herbal medicine. It will extend its neck when its ready to fire and will usually spit two blobs. Make sure you're running when this happens as they tend to be aimed where you're standing.

That said, it does have some non-poison based close range attacks that can pack a punch, though these are much easier to dodge thanks to a long windup time. If you can chop off its tail, you'll have a slightly easier time up close since you're limiting its attacking range directly, but even up close you have to deal with poison and some of its more aggressive attacks.

Things get a little more perilous should the Pukei-Pukei eat something. As it can fly around, this is relatively easy for it to do and you can tell when it has as it has a growth in its neck area. It can chase after you and unleash a tongue lashing attack that is difficult to avoid. Yet the most dangerous, and subsequently rarest attack it can do, is to spew poison from its tail. You'll know it's about to do this when it turns to face its bulging tail towards you, preparing to spurt out a huge torrent of acid. Make sure you're far away from the business end should this be the case.

As for how it behaves, anything smaller than it can get pestered around or even eaten to augment its poison attacks. However, should any larger creatures approach the area, it will flee the area by taking to the skies. This can be used to your advantage by anticipating where it is going to go and setting up an ambush.

What materials can I get from the Pukei-Pukei?