Time-travelling punch ‘em up Mortal Kombat 11 is a good fighting game, if you trust the stupid words of my past self in this Mortal Kombat 11 review. The present-day version of myself will remind you that it has a stingy streak when it comes to doling out its various krypto kurrencies. Rewards for fights are often measly and getting new costumes and gear for your outlandish biffers sometimes feels like a slow climb. Especially in the Towers of Time mode, a series of fights with annoying “modifiers” and “konsumables” that make some brawls harder and more fiddly than they should be. Well, developers NetherRealm Studios seem to have heard this kommon komplaint. A patch yesterday reduced the difficulty of the Towers of Time mode, increased rewards from fights, and has given players a “sorry” gift of 500,000 koins with a K, among other goodies.

The full patch notes can be found here. But the highlights include “Increased Koin Rewards for kompleting Towers and Tower Platforms” and “Further opponent health reductions in higher level Towers”. They also say they’ve “adjusted” the difficulty curve of AI fighters in those tall buildings of pain. Outside of changes to the mortal minarets, they’ve increased the koins you get from ranked matches, and made some non-specific changes to the matchmaking. If this all sounds familiar, it's because the PC version has been getting its updates slightly later than our console pals (they got this one a few days ago, on April 28th). But we're caught up now.

As for claiming that gift basket of currency: you’ll want to start the game up before Monday, May 6th. It’s a decent chunk of gamegold, the studio’s way of saying “sorry for being quite tight-fisted and nasty to you in this game about decapitating human bodies”. They go through the contents of the sorry-box in the patch notes: 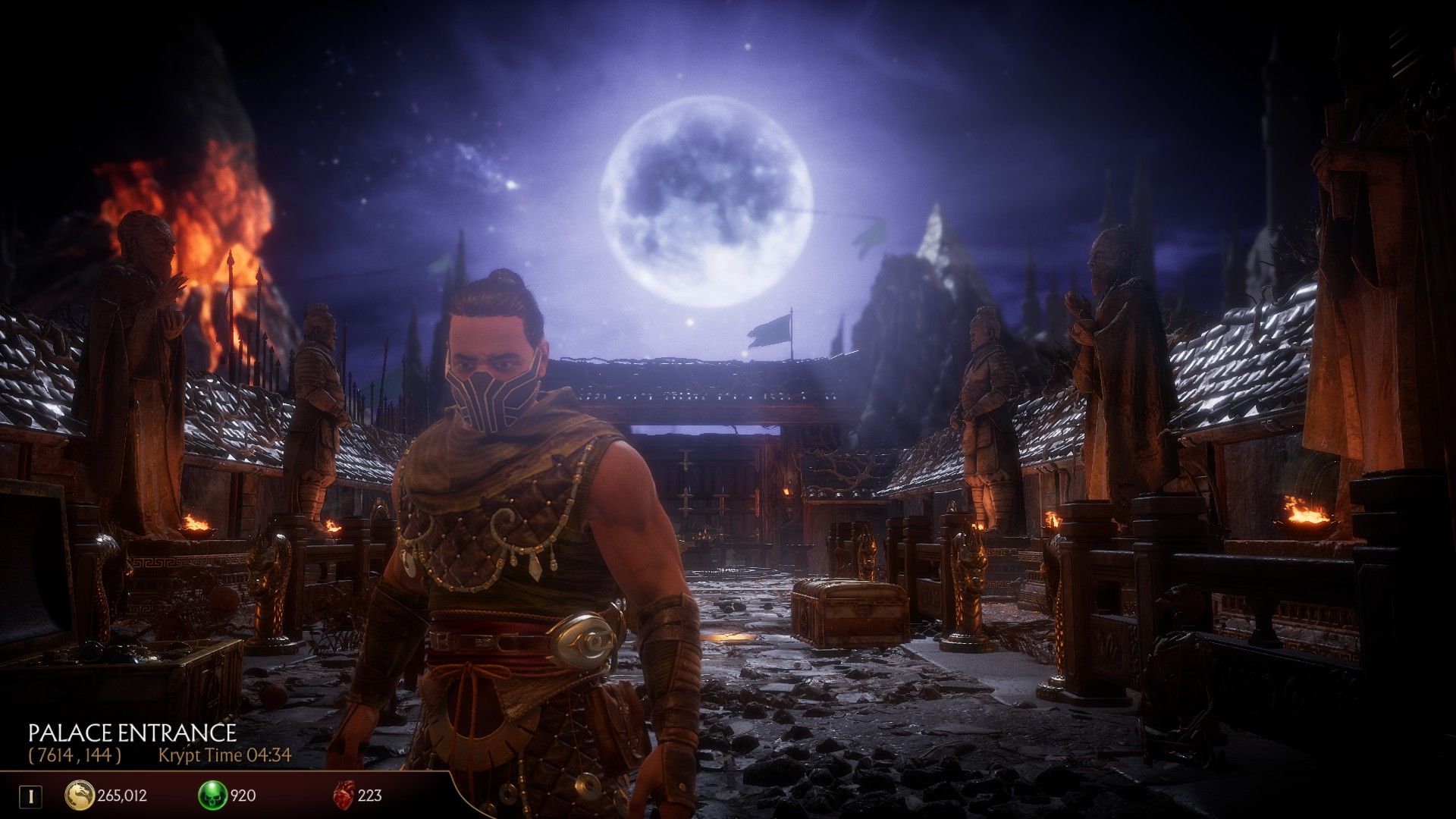 For the confused: souls and crystals and hearts are all used in a third-person side game called The Krypt, which you can see above. It's basically an Ali Baba’s cave of lootboxes, a fancy and novel way to encourage players to spend their fightbucks. Some "boxes" are green skeletons and you need green souls to open those (ooh, some gloves). Other boxes are gore-encrusted cases, and require red hearts (ah, a character skin). Imagine a really macabre Disneyland full of colour-coded vending machines. (A Disneyland that can be exploited! Dave says he has a shady trick to farm hearts).

The sorry-box gives you enough in the disparate kurrencies to open quite a few of these lootcorpses and gorecrates. One skelebox costs 100 souls, for example, so you can open 10 of those with just the souls in your sorry-box. Pretty decent. I haven’t had a chance to pop back into the game to see if the fighting rewards are noticeably more generous, but I will be picking up my large briefcase of hearts, thanks very much.