Nvidia's RTX 2080 Super card is finally here. Offering superior speeds for roughly the same price as the original RTX 2080, the RTX 2080 Super is pretty much the 4K graphics card to beat right now outside of Nvidia's crazy expensive RTX 2080 Ti - especially as it currently has no real competition from the likes of AMD right now, either. In fact, its closest rival is Nvidia's own £485 / $500 RTX 2070 Super. But how much faster is the RTX 2080 Super, and is it worth spending another two hundred quid on it? Let's find out via the medium of some lovely bar charts.

Like my usual comparison articles, the aim here is to see how all both cards stack up across a variety of resolutions and graphics settings. This time, I've only included my 4K and 2560x1440 results because, let's face it, no one should be buying either of these cards for playing games at 1920x1080. There are plenty of cards that can do that for a fraction of the cost of these high-end behemoths, such as our current champ, the Nvidia GeForce GTX 1660 Ti.

In fact, buying either of these Super cards for 1440p gaming is still a bit of an extravagance if you ask me, but I've included these benchmarks anyway as the RTX 2070 Super sits pretty much on the border of being a top-notch 1440p card and an entry-level 4K jobber.

To test each card, I paired them with my Intel Core i7-8700K CPU and 16GB of Corsair Vengeance 2133MHz RAM and put them through my general games benchmarking suite, taking an average frame rate from either their own built-in benchmark tools or from my own repeated manual gameplay tests. The games includes Shadow of the Tomb Raider, Total War: Three Kingdoms, Final Fantasy XV, Monster Hunter: World, The Witcher III, Assassin’s Creed Odyssey, Metro Exodus and Forza Horizon 4.

For this particular test, I've used the Nvidia Founders Editions of each card, as these were the ones sent to me for review. Both run at their stock reference speeds, so they should be fairly representative of their respective card categories. With all that in mind, then, let's get down to those tasty bar charts.

Starting at the deep-end, then, here's how each card stacks up when faced with 4K Ultra settings across some of today's toughest games. Needless to say, neither are really fit for playing games at this kind of quality setting unless a) it's an old game like The Witcher III or b) incredibly well optimised like Forza Horizon 4. 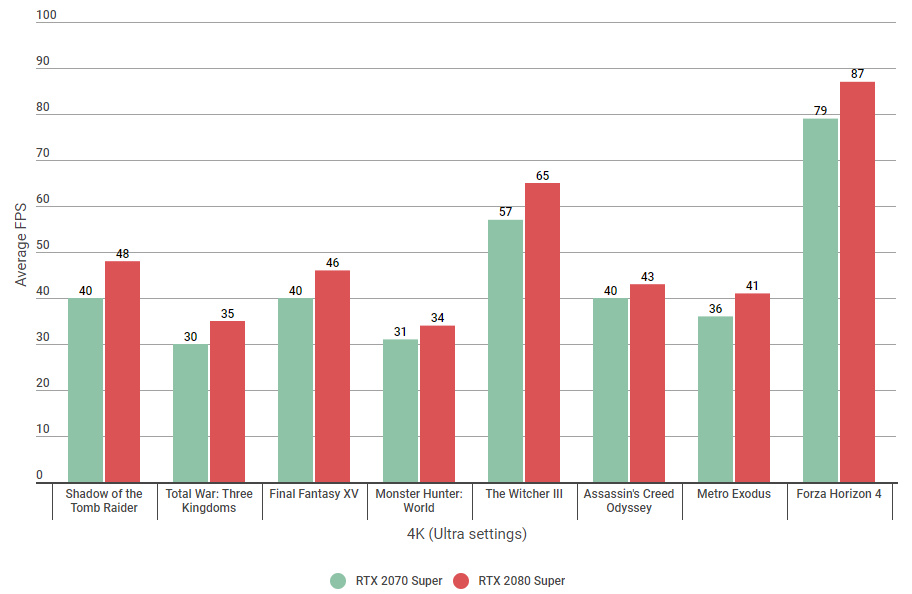 That said, both of them still manage an average of at least 30fps across the board here, which is still pretty impressive all things considered. Still, in the case of the RTX 2070 Super, you're still seeing lows well below that in both Total War: Three Kingdoms (26fps) and Monster Hunter: World (28fps), which isn't exactly ideal.

Moving down to High quality settings (and eliminating the games that could already hit 60fps on Ultra), both cards offer much more playable speeds here, with all but one of the RTX 2070 Super's average frame rates sitting comfortably above 40fps. However, while the the RTX 2080 Super is perhaps only an average of 5-6fps faster in a lot of cases here, it's precisely around this kind of mid-40s mark where a small boost like this can make all the difference between something that's just about playable and something that's actually pretty all right. 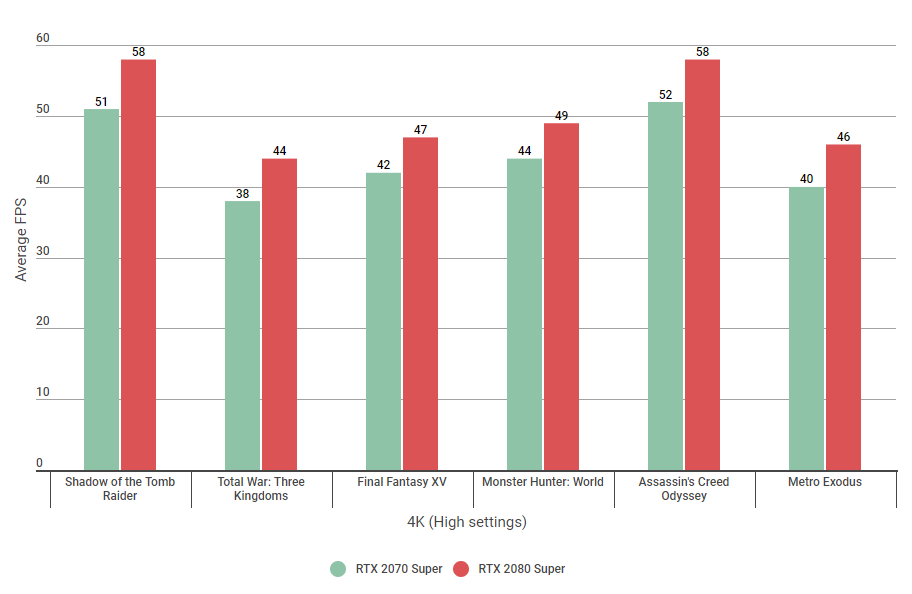 As for Medium settings at 4K, the RTX 2070 Super is just about able to reach average frame rates between 50-60fps here, but it's the RTX 2080 Super that's able to hit 60fps much more consistently. Admittedly, most 4K screens max out at 60Hz these days, so the benefit you're going to get from an average of, say, 69fps in Total War: Three Kingdoms, is almost certainly going to be lost on you due to the limitations of your gaming monitor. The same goes for Assassin's Creed Odyssey. 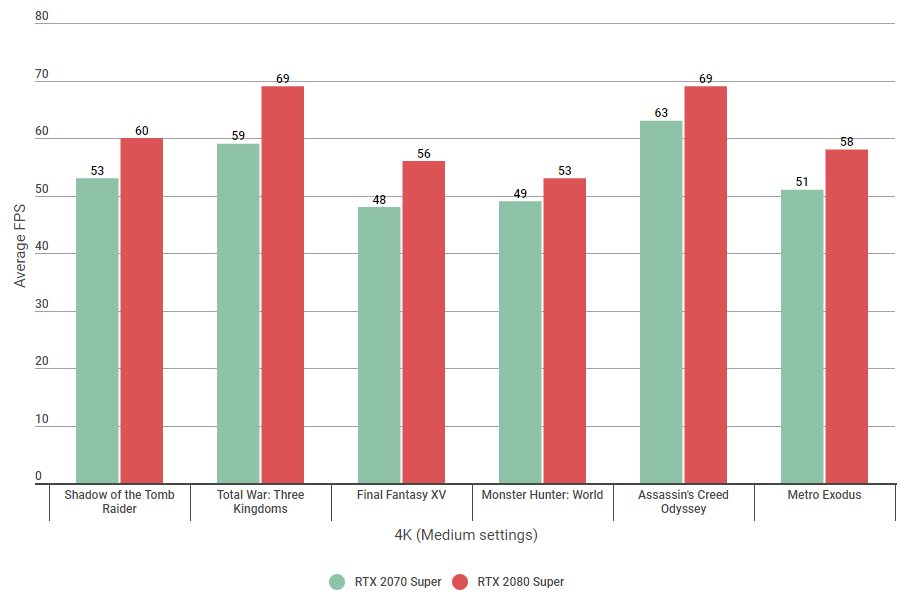 However, while you may not feel the benefit of these particular games right now, the RTX 2080 Super will almost certainly stand you in better stead further down the line when games start getting even tougher to play at 4K. If I were buying a 4K graphics card right now, I think I'd probably almost certainly go with the 2080. I wouldn't enjoy it, because come on, no one really wants to spend almost 700 quid on a graphics card, but when the only other alternative is buying a card that only just about do Medium settings now doesn't exactly fill me with a lot of confidence.

If you're mainly buying a card for flawless 2560x1440 gaming, however, then the RTX 2070 Super is definitely more than enough right now. Able to hit a consistent 60fps in practically ever game going (or damn well near it), the only possible reason why you might want to upgrade to an RTX 280 Super here is if you have a high refresh rate gaming monitor - but even then I'm not sure the boost you gain here is really worth it. 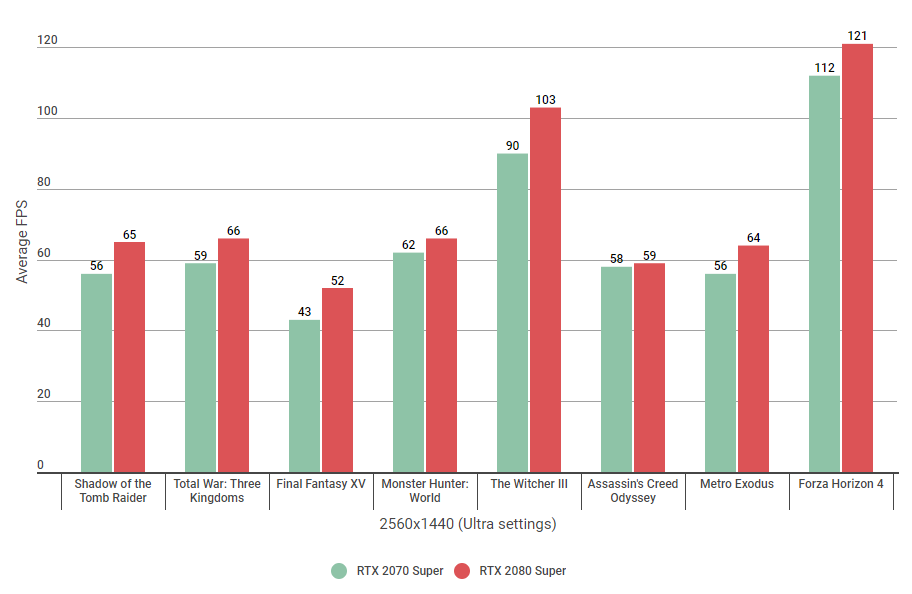 As for that rather low-looking Final Fantasy XV result, this is with all of Nvidia's fancy pants effects like HairWorks, TurfEffects, VXAO and ShadowLibs switched on, because this is the kind of calibre card you need in order to do it properly at this resolution. With everything switched off, you're looking at an average of 71fps for the RTX 2070 Super and 82fps for the 2080 Super.

However, if you've got your sights set on 4K, then you'll probably thank yourself later for spending that extra cash, however much it's going to bruise your wallet in the short term. I know it's a big ask over the RTX 2070 Super, but as I mentioned above, I'm just not sure it's particularly wise to buy a 4K graphics card that can only just about handle Medium settings at the moment, as that kind of quality level is only going to deteriorate further as the years roll on - especially if the current crop of confirmed ray tracing games all end up requiring the same kind of intense PC requirements as Remedy's upcoming Control, too.

There is, of course, still AMD's Radeon 7 to take into account, although considering that could barely keep up with the original RTX 2080 (as you can see from my Radeon 7 vs RTX 2080 article), it can't really hold a candle to Nvidia's similarly-priced Super-charged successor.

As a result, if you're buying a 4K graphics card right now, then the RTX 2080 Super is pretty much the only way to go in my eyes, making it my new 'what you should actually buy' recommendation over in our graphics cards rankings.