Anyone who didn't uninstall Final Fantasy XV in a fit of despair and/or rage last month after the abrupt cancellation of 75% of its upcoming DLC will have noticed a delightful 15GB update waiting for them on Steam today, in which finally arrives support for Nvidia's frame rate rocketing tech, DLSS (or deep learning super sampling, if that makes things any clearer).

It's one of the things I've been most looking forward to testing on the new RTX GPUs, but as with almost everything to do with the launch of Nvidia's RTX family, there's a catch. You can only enable it if you have a 4K display.

In case you've forgotten what DLSS is all about (which, trust me, is easy to do), it's one of the main reasons (along with its titular ray-tracing, or fancy light reflection, tech) why you might want to buy either Nvidia's GeForce RTX 2070, RTX 2080 or RTX 2080Ti graphics cards over their GTX siblings. Whereas ray-tracing focuses on the quality of light, DLSS is all to do with anti-aliasing (AA), the thing that makes object edges appear nice and smooth instead of horribly jagged, pixelated steps.

However, if you've ever fiddled with any of the AA settings in any of Crystal Dynamics' recent crop of Tomb Raider games, for example, you'll know that AA can be quite the drain on your old graphics card. Even today's best graphics cards still struggle to run 2013's Tomb Raider with its maximum AA settings at high resolutions, and it's only become more demanding as the years have gone on.

The special thing about DLSS, though, is that it uses all the AI magic stuffed inside each Turing GPU's Tensor cores to speed up all those edge softening calculations and take some of the strain off. This lets the graphics card get on with more important stuff like maintaining a decent frame rate and keeping things running nice and quick like.

Indeed, Nvidia have said that, with DLSS enabled in Final Fantasy XV, you can get up to twice the performance of GTX 1080 when playing with an RTX 2080 at 4K. That's pretty impressive no matter which way you slice it, and provided we actually get more confirmed DLSS games, it could go a long way to help justify the cost of an RTX card compared to Nvidia's top-end GTX cards. As you may remember from my RTX 2080 review, the 2080's raw performance is roughly on par with the GTX 1080Ti, while the RTX 2070 is a teensy bit faster than the GTX 1080. DLSS, however, could be a real game-changer.

That is, if it was available on any other resolution aside from 4K. 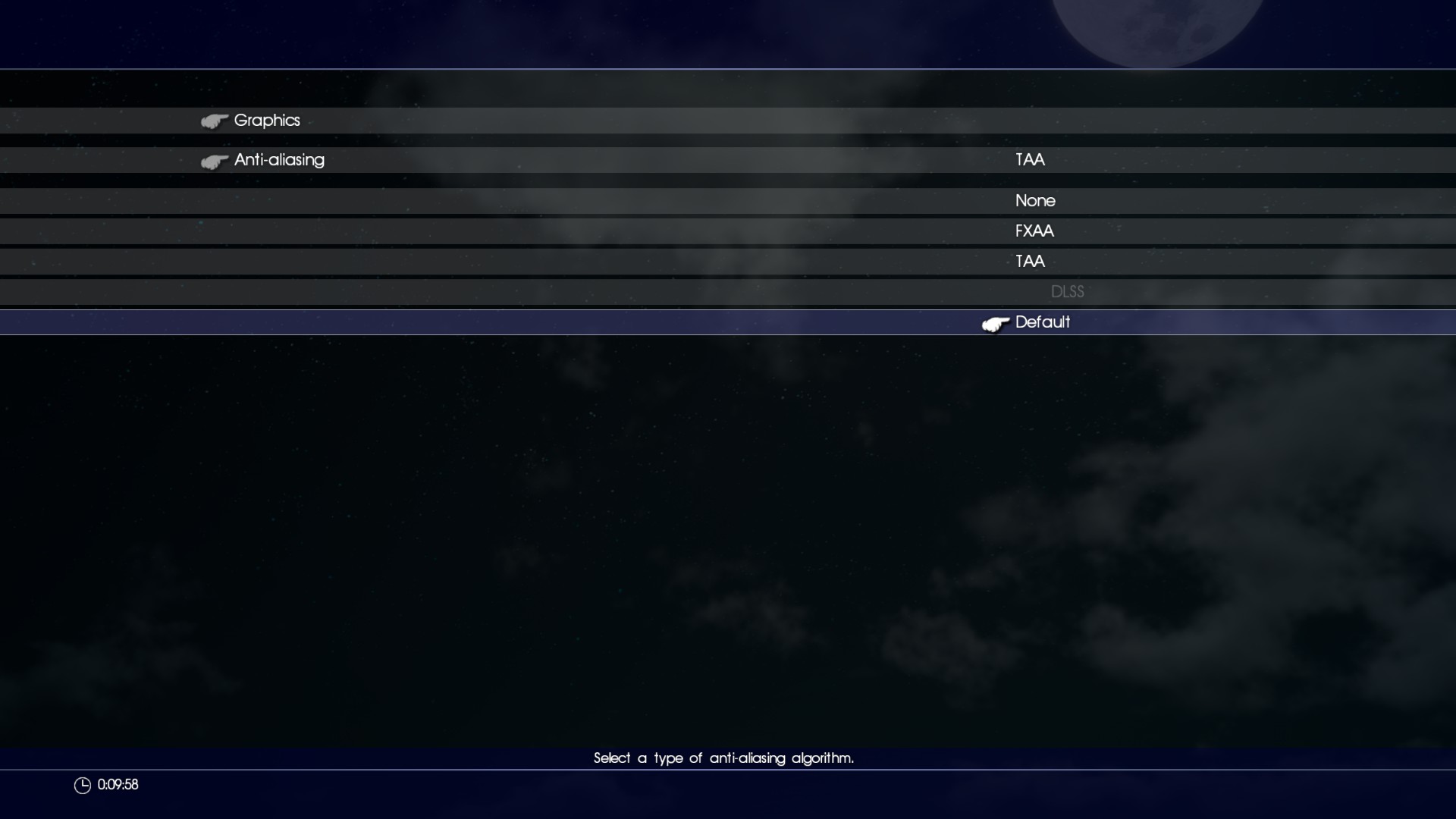 Alas, when I went in to try and enable Final Fantasy XV's DLSS feature on my 2560x1440 monitor (you have to choose the Custom preset in the graphics options and scroll down to anti-aliasing to find it), the DLSS option was greyed out, so I've haven't been able to see how much of an improvement we're really talking about yet. I've set the 15GB patch going on the PC connected to our 4K TV, though, so I should be able to bring you some proper results either tomorrow or very early next week at the latest.

Still, it's irritating nonetheless that, after all this time waiting for Nvidia's RTX features to finally arrive (the only other game that currently has anything RTX-related is Battlefield V), that it's limited to such a niche resolution. Sure, you probably wouldn't be buying the RTX 2080 and RTX 2080Ti for anything but 4K due to the sheer cost of them, but it would have been nice for, I don't know, the RTX 2070 to be able to do it at 2560x1440 as well. It's entirely possible that support for 1440p and even 1080p resolutions might arrive at some point in the future, of course, but for now, you're stuck with just 4K.

Now, if I could just cast Haste on my internet connection, I might be able to do some of that there testing lark. Watch this space.