Last summer, the whole gang in Overwatch [official site] got swept up by Olympics excitement, celebrating by wearing sporting apparel and playing football. Without the pageantry of the Olympics to unite everyone this year, Blizzard's summer event now celebrates the two camps of people outside in the scorching sun: those who are seriously into sports, and those who just want to hang out and have a barbecue. Yup, the 2017 Overwatch Summer Games are here, bringing back Lúcioball with a new ranked competitive mode, and adding more outfits for Overwatchers to just chill.

First, sports. Lúcioball, the 3v3 mode where everyone plays football with special abilities, is back. Blizzard have tweaked it a little, and also added the new serious Copa Lúcioball mode. They say that Copa "offers a more competitive experience with placement matches, skill ratings tiers, leaderboards, competitive points, and more." Serious sports for serious sporters.

For everyone, there's dressing-up. This year's new skins are mostly summer fun. Soldier 76 becomes a dad at the grill, Widowmaker swaps her sweaty catsuit for a bikini and sarong, McCree is a lifeguard, Junkrat dons the traditional Australian casual summer outfit of full cricket gear including pads and helmet, Reaper becomes a biker because of course he's sooo cool he'd wear full-body leathers in the summer, Sombra goes casual, and Mercy... wears a Hermes costume? Weird. [Update: I'm told it's meant to be Nike, the goddess of victory, but mate those sandals.] 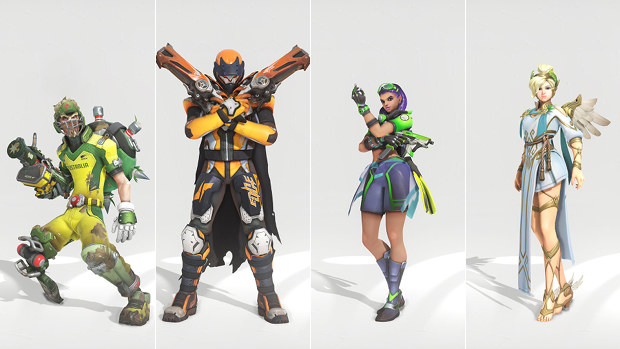 Last year's summer skins are available to buy with credits again too, now with a discount.

You can see all the skins, old and new, on the event page. They're unlockable with credits or you can spend real money and chance your luck with the Summer Games Loot Box, which offer random cosmetic items from a huge assortment of skins, sprays, icons, voice lines, and all that. The crates start at £2 for two, getting cheaper when bought in bulk.

The 2017 Overwatch Summer Games will run until August 28th. Overwatch game director Jeff Kaplan explained more about it all in this video last week: