If you click on a link and make a purchase we may receive a small commission. Read our editorial policy.
Paradise Killer review
A tough but super stylish investigate 'em up that'll have you dancing all the way to the murder trial. Probably through some blood from a ritual massacre. But that massacre was a legal one, you can ignore it.

There are horror games like Agony that are pretty fixated on the idea of the intersection of sex, demon worship and horror being solely on the corner of Lazy Gore & Torture Rd. and Fannies With Teeth Ave.

How shortsighted they are proven now, when a neon-saturated open-world murder mystery set on a tropical island in a different reality manages to do sexy ritual blood sacrifice, worshipping unknowable goat gods - and, by extension, the banal, cosmic horror of it all - way better. And you get to listen to a banging soundtrack rather than the boring screaming of the damned. Friends, I have met Paradise Killer, and it is good.

It's also weird, at the start almost aggressively so. You start in medias res, in first-person, as the exiled detective Lady Love Dies, who was banished from Paradise Island many years ago, but is called back for one last job. At midnight, the entire ruling council of the island was slaughtered in a ritualistic murder, and you're the only investigation freak with the chops to figure out who really dunnit - 'cos the main suspect is an obvious fit up.

Everyone on the island, including Lady Love Dies, already knows the history of it, which is why it's disorientating to have casual conversations about worshipping Silent Goat, the immortal Syndicate, and discussions of how this is island number 24 and we're all about to move to island 25. You do, however, relax into it as more is revealed, and there are loads of collectable items that give you little jigsaw pieces of the lore.

I don't want to spoil it, but just so you understand the setting: the Syndicate (of which Lady Love Dies is/was a member) are a group of religious zealots who began worshipping weird giant alien gods, and have been living for eternity on a series of different islands. These islands are psychically willed into existence every time the current one gets ruined, usually by demons. The difference between demons and gods is unclear, and indeed I ended up considering my closest friend on the island to be a blue dog-faced demon called Shinji who kept appearing everywhere.

Being a detective in Paradise Killer is probably the least hand-holdy detection I've ever done in a game. You leap from your marble exile tower, plummet hundreds of feet through the air as some amazing synthwave music plays, and are shoved out onto the island to solve a murder. There are no quest markers, only an optional overlay that shows where other characters are. 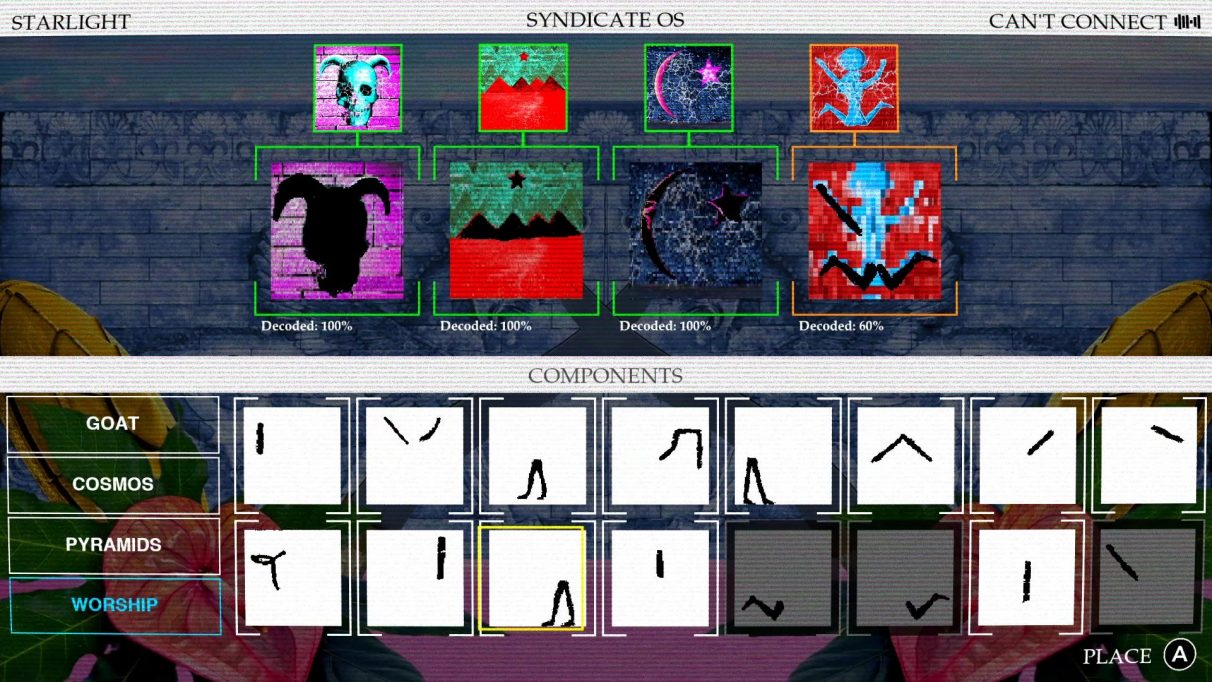 Systems on the island are not explained, but are there to be explored. There are computers to hack into, with strange image puzzle locks. There is a cargo crane at the warehouses, and a weird system of switches to operate it, so what might you find if you figure it out? The vending machine operators have a vital bit of software to upgrade Starlight, your investigation-aiding laptop, but you have to prove you're a loyal customer first. Sam and Lydia Day Break have been spending time at the beach near the farm. Maybe there's a clue there. You should go and look, probably.

Your chief suspects are all members of the syndicate, and you also have to interview them, note their statements, and find the gaps therein by cross referencing them with other statements, or physical evidence you find. Akiko 14 says she called about an escaped prisoner from the isolation cell, but Witness To The End contradicts this, and the cellphone data from the comms tower further blows a hole in that alibi!

This isn't some bullshit 'whoever you can successfully accuse is guilty' cop out mystery either. There is an actual correct ending to put together, and it's possible to accuse the wrong people, or not have enough evidence to accuse the right one. It's difficult, too. I am almost 100% sure I know what really went down that night, but I haven't got all the evidence I need to prove it at trial (and I know because I've tried a couple of times already). It is, perhaps, a bit too hard, and you really have to go off the beaten track to find all the evidence you need. 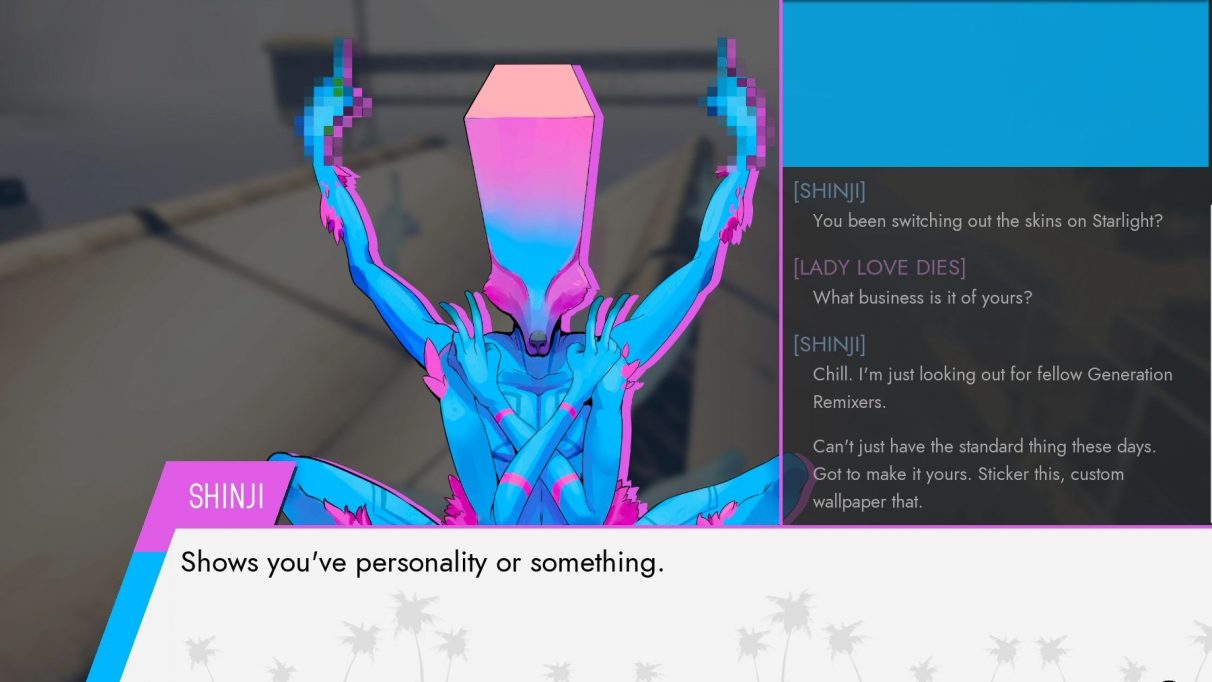 The open-ended nature of your investigation also means that you spend a lot of time criss-crossing the island. The map is a bit obscure, and to find all the clues and collectables, not to mention the Blood Crystals that serve as currency and are hidden everywhere, you'll also be doing some floaty platforming. Fast travel and manual save points abound, luckily, but the fast travel costs Blood Crystals too, and it's still an annoyance when you need to talk to two NPCs on opposite sides of the island.

Where Paradise Killer really excels is in the aesthetic. It understands that the sort of weirdos who do ritual sacrifice to elder gods would do so in a huge ziggurat full of gaudy gold statues and pink marble. You know: colours that really make blood spatter pop. They'd live on a gorgeous tropical island full of flowers and butterflies, not a dank torture pit, otherwise what's the point? Every NPC you talk to, who are all 2D illustrations and stand out like beautiful cardboard cutouts against the strangely hyper-real 3D world of Paradise Island, has a name like Doom Jazz, and is hot. Even Shinji. 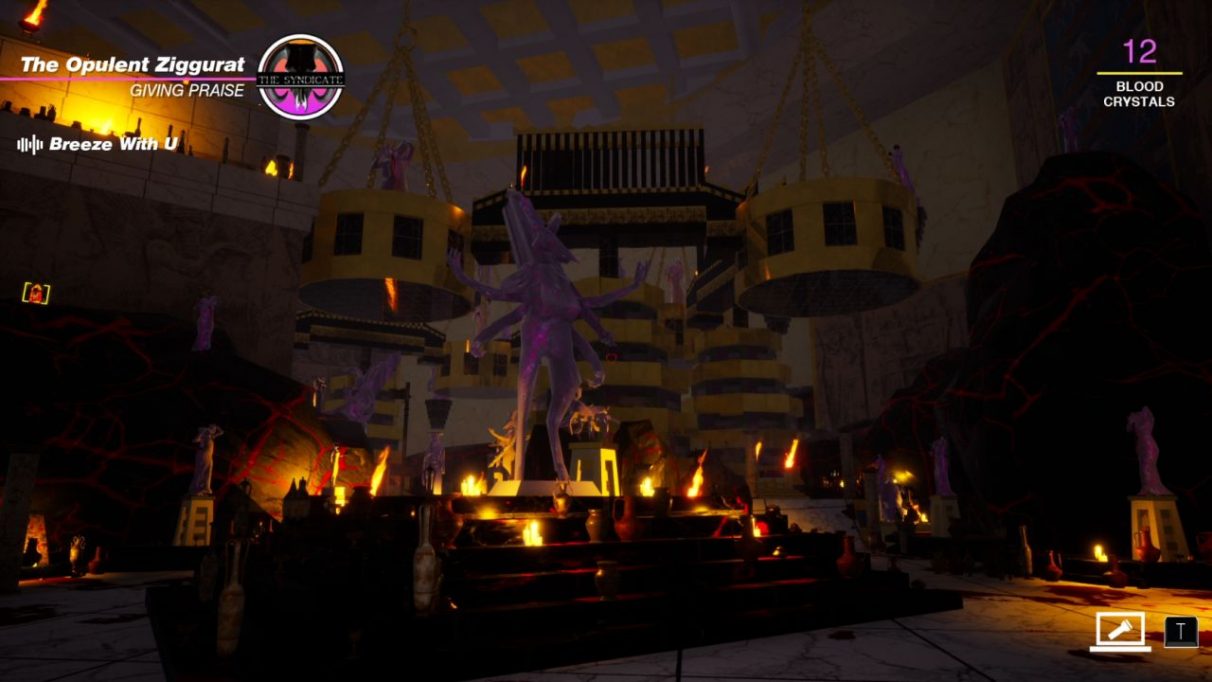 But Paradise Killer also backs the style with substance. The Syndicate's lifestyle is supported by the mass abduction and eventual murder of normal people from our reality, who become a kind of cattle class. They're banned from doing basically anything, placated by soft drink mascots, and give their literal blood to a cause they never benefit from.

At one point Shinji asks Lady Love Dies if she's ever considered how the Syndicate are actually probably the bad guys because of this. She says that she doesn't see why that makes them the baddies. "I suppose it wouldn't," Shinji replies, disappearing in an explosion.

That's the real sex-demon-torture horror, isn't it? A group of immortals living it up in the sun, marrying and remarrying and fucking and bloodletting abductees over sticky pink stone statues. Forever. But God, do they have a great soundtrack for it.