Rainbow Six Siege is about to enter its fourth year of DLC and seasonal balance changes. This is quite the feat, with the game retaining a healthy player base eager to get into the next map - Outback, and try out a couple of new operators. Operation Burnt Horizon is an Australia themed one, and if the hints from Ubisoft are anything to go by, these could be quite the interesting pair to enter Siege. Our guide to Y4S1 will tell you what we know about the new operators, the new map, and the big addition to combat cheating in the game.

With the beginning of Year 4, there's no better time to jump into Rainbow Six Siege. So to get up to speed, head over to our Rainbow Six Siege guide hub, which contains some basic tips and tricks, as well as links to the myriad of other operators that are featured in the game to date. 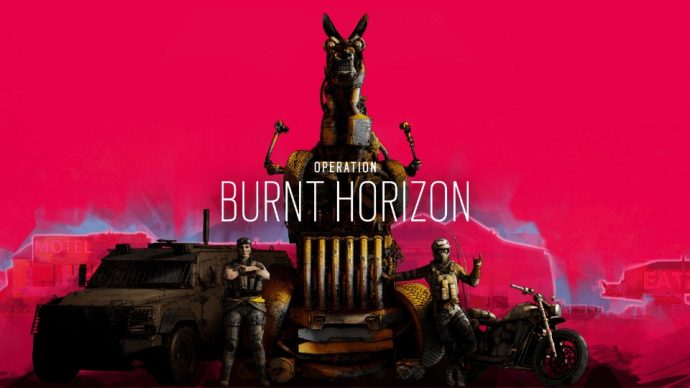 Year 4 will be released in phases, one operation per season of the year. The first one has already been detailed, which you can find out more in our guide for Y4S1 - Operation Burnt Horizon. Every season includes a couple of new operators purchased in the season pass, as well as a free new map and any balance changes or updates that are applied to the game.

With the new year comes eight new operators. As the seasons roll by, there will be more details on exactly who the new operators are, what their abilities are, and any more information about those particular seasons. The confirmed operators so far are two Australians from the SASR unit - one attacker and one defender.

It's not been officially confirmed what these operators will be capable of, but leaks have shown that their handles are going to be "Mozzie" for the defender and "Gridlock" for the attacker. Mozzie can apparently control other player's drones in some way, while the official announcement says Gridlock can make roaming defenders' lives a nightmare. There will also be a new Australian themed map, which has been named as "Outback", together with the introduction of the MMR Roll Back - which has been created in an effort to combat cheating in the game.

You can purchase the Year 4 Season Pass via its Steam Page, but you can also buy it directly from Ubisoft via Uplay or the Ubisoft Store. It will cost £25.99, $29.99, or €29.99 - depending on your region. For your hard-earned cash, you will get the following items:

If you buy the season pass anytime before 4th March 2019, you'll also receive a Volcano weapon skin and a "Lava Six" charm to attach to your weapons. Those who buy the Season Pass at any time will also also gain access of VIP premium membership for a year, which ends January 31st 2020. In that, you get the following:

So those are all of the things that are coming to Rainbow Six Siege - further extending the lifespan of a game that's still very popular, in ways that will shake up the current meta. We've of course got lots of guides on the current crop of Rainbow Six: Siege operators, so be sure to check out the one you fancy playing as. Alternatively you can also take a look at our Rainbow Six: Siege Fortress map guide for details on the camera positions and any other points of interest you should be aware of when defending or breaching.