Tom Clancy's Rainbow Six Siege's fourth year has been officially announced, with the first part dropping in the next month or so. We'll be getting our first glance at the new operators soon, but we figured we'd add everything we know about the new year to our guide. For those new to our coverage, there's also some important things to know when first starting out, as well as specifics for playing as the attacking team or defending team, and more in-depth stuff on each operator and the specific maps being added as the game continues its long run.

It's all well and good knowing how to point a gun and shoot, but it's a whole different matter knowing how to outmanoeuvre in a high-stakes game such as Rainbow Six Siege. It's not just the fact that the terrain is constantly shifting around you as new routes and firing angles are being blown in the destructible walls, it's also that every operator has a different set of skills and you need to master your own and your opponents to know what the best decision is in any given situation. The focused guides below will help with just that: 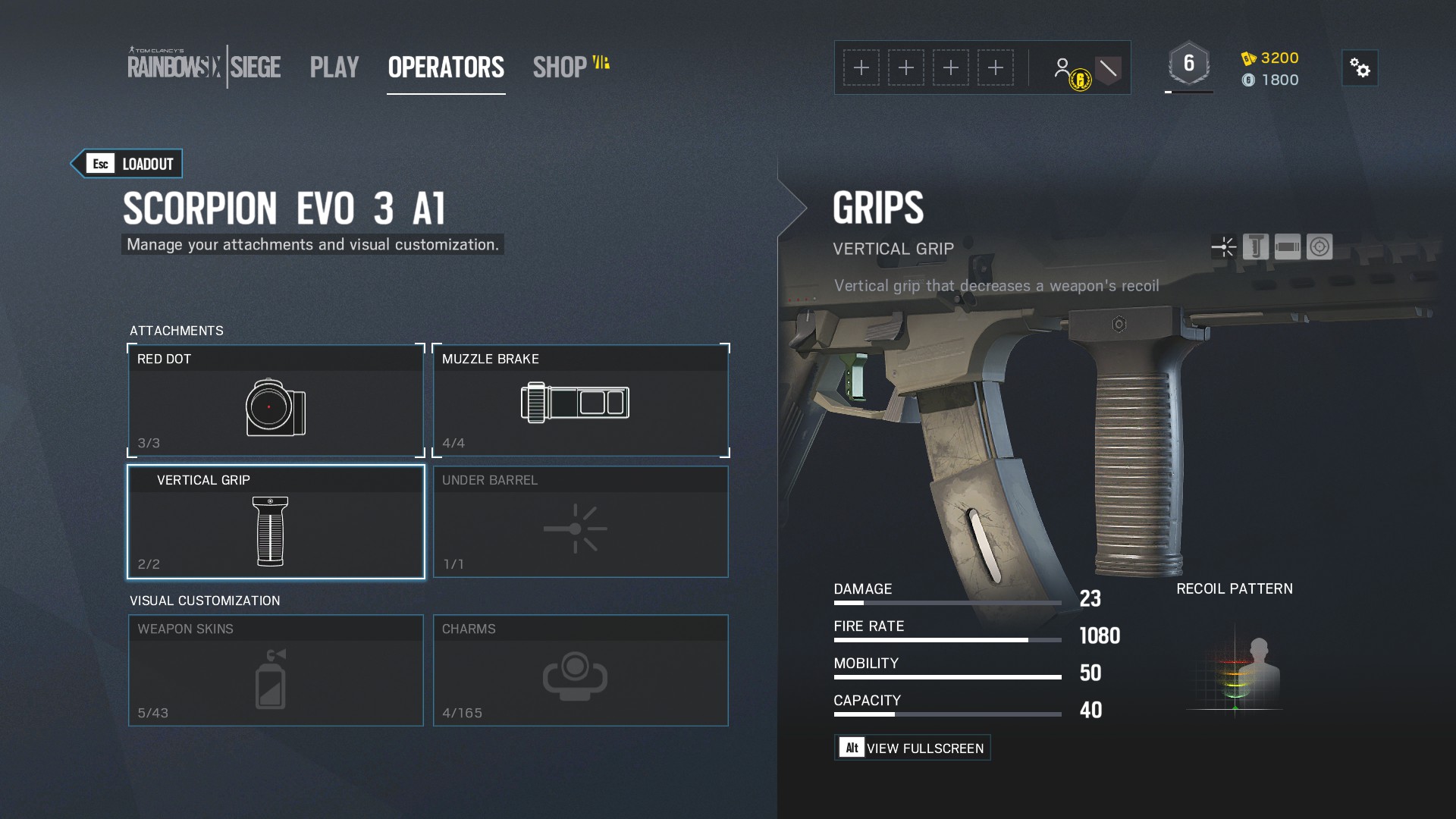 Having the right setup in Rainbow Six Siege

If you're looking to get into Rainbow Six Siege, the first thing you need to know is that the majority of operators require coordination between teammates. Therefore you need to be able to communicate with your team. There are ways to do this in-game, but really you should have the ability to talk verbally in order to ensure the enemy aren't alerted to something you know and you're not stopping to type. It should be a requirement that players of Rainbow Six Siege wear a headset with a microphone.

If you don't have one that's readily available, make sure you still try to call out via text. To do so, press the Y key on your keyboard to open Team Chat. Memorise some key locations, room names are preferable at higher levels, but there are other call outs that can be equally as effecting, like for example "Stairs left/west" if you're near that part of the map. If you're a player such as Lesion, whose gadget has icons to show only that player if a trap has been tripped, make sure you're calling out where the enemy is to your allies.

It's also worth taking some time to familiarise yourself with the controls. You shouldn't need to change anything unless you have a particular setup you like, but it's important that you know what button does what for things like using your abilities and leaning either side. It could make the difference between seeing an enemy and eating a face full of lead.

Sorting your load out

Finally, it's a good idea to go into the operator selection menu and play around with the attachments before jumping into a game. You do get a bit of time before each match, but not enough to fully set up an operator beyond switching things like gadgets and maybe one or two sights. It'll save you some ill-needed stress before things get really tense. You do unlock all the attachments along with a set of operators if you grabbed the starter set immediately, so it's worth experimenting to see what works best.

Attachments are incredibly handy depending on the weapon. Some more high-powered weapons can benefit from a drop in attack power for the benefit of a silencer, while the muzzle brake is very useful for recoil management. If there's one attachment you should avoid though, it is the laser sight. This does give benefits for shooting from the hip, but this is situational at best and since you're mostly aiming down sights, this isn't all that useful for more expert level play. Laser sights also have that added disadvantage of drawing attention like a pet with a laser pointer, so don't use it unless you know exactly how to manipulate it.

Lastly, when joining a game, make sure you choose an operator. If you don't, you'll be given a random operator that may not be the one you want. 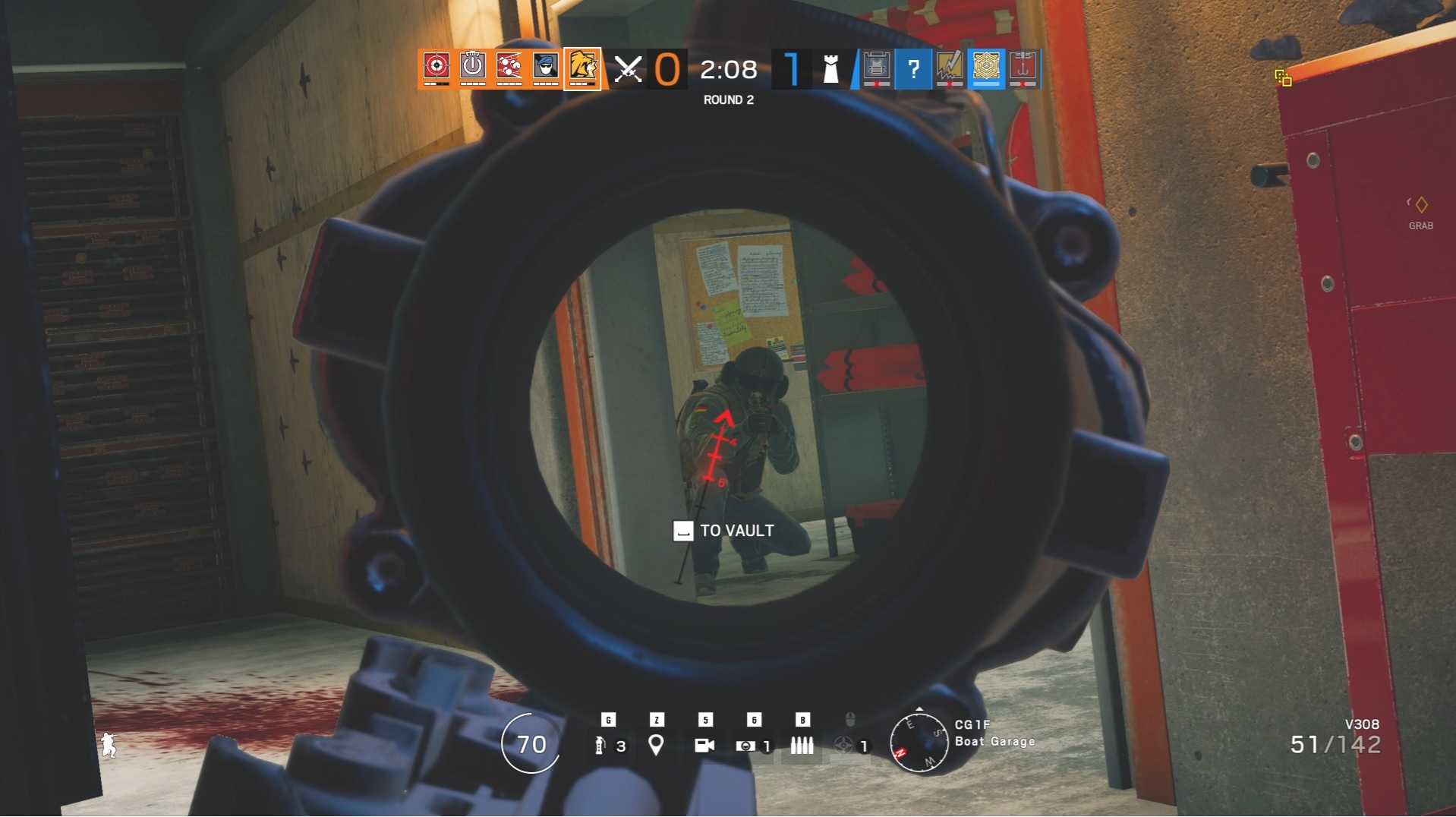 Getting into good habits in Rainbow Six Siege

Most multiplayer shooters allow for players to run around, before bringing up their sights to deal with enemies they've run into. If you do that in Rainbow Six Siege, you won't last very long at all. Enemies will then have the advantage and your team will likely be very upset with you; verbally in most cases and using their favourite four letter words to boot.

So what are the good habits you can get into? The first is to find a sight that's comfortable for you, then ensure that you're aiming down sights constantly. When exploring, instead of just running and trying to use the camera to find enemies, aim down the sights and lean into each of the corners so that you’re always prepared for what’s on the other side. Chances are you'll be able to see them long before they see you, meaning you can take a few pot shots to the cranium.

The first thing you should do as soon as you make it to Rank 5 in the game's progression system is to set up a custom multiplayer game and explore the maps. This is so you can get a feel for the type of terrain you'll be exploring, which walls are destructible, and where the objectives might be. It may even prevent a few instances where enemies surprise you, such as firing from the floor above through the floor. Our map guides in the first section do have a few of the maps in detail, but there are plenty more of the older maps that it's worth having a look around for cameras, objective locations, and potential vantage points.

In the compass in the HUD, it tells you which room you’re currently in. Experienced players will know if you call out that an enemy is near a specific room, where in the map that is. For both attackers and defenders, that is valuable information you can pass on. You can also spot on cameras, but try not to do this too much. 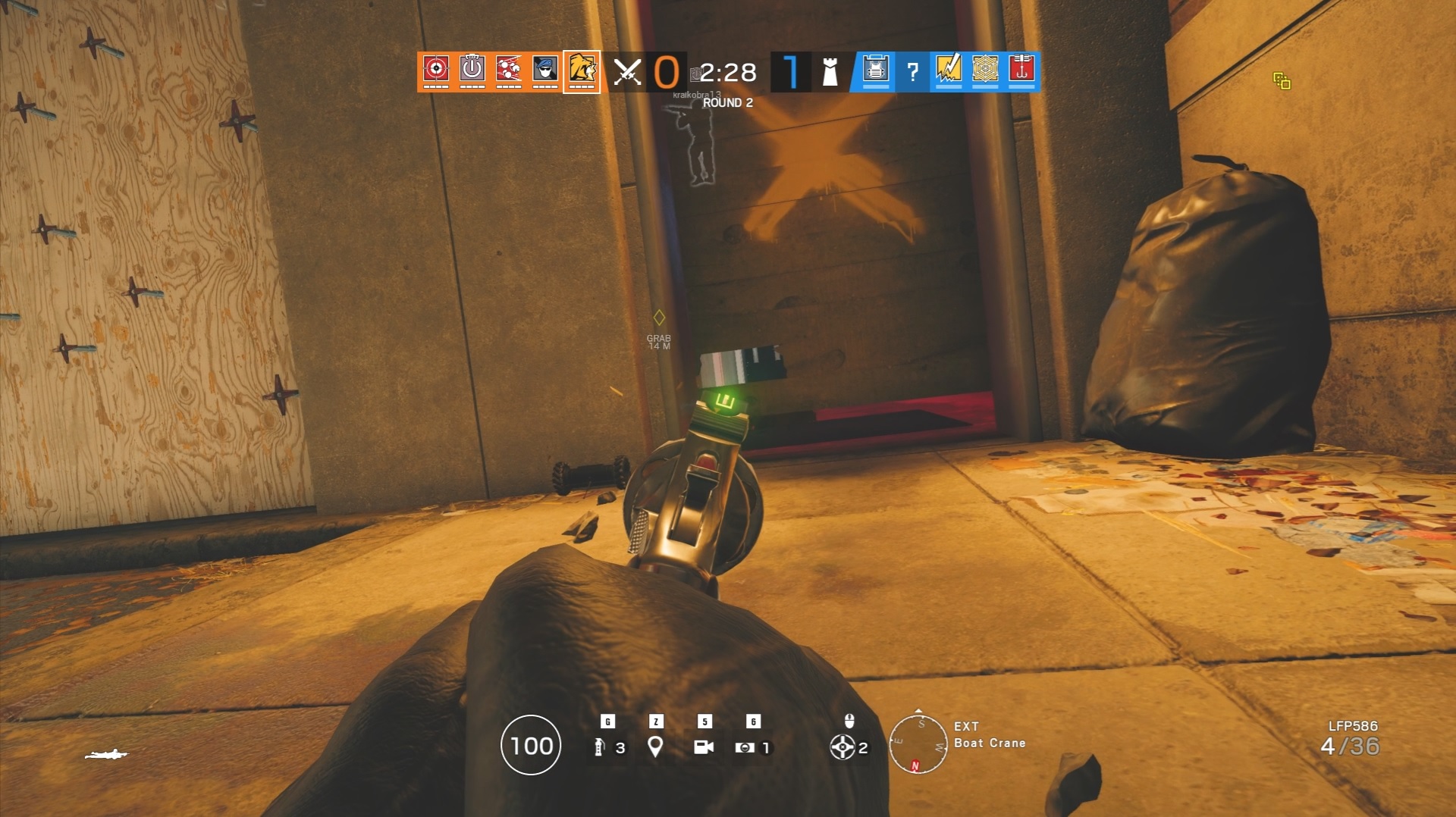 When to engage and how to move

As this is a more tactical game, your movement can say a lot about your current position to the enemy. If you’re sprinting, chances are the enemy can hear you approaching. Crouch as much as possible to reduce the noise. You do however want to keep moving where possible as sitting still and being spotted will only result in an easy kill for your enemy. This can be difficult if your operator is more of a gadget orientated defender, but the movement doesn’t have to be very dramatic, it can just be side to side in order to ensure the enemy doesn’t know precisely where to shoot.

One other important difference to be aware of compared to most shooters is the fact you can create small holes in wooden walls to aim through. If an unsuspecting enemy wanders into that field of vision, you can take some pot shots through them. Failing that, you could always tear up floorboards with a shotgun or explosives and aim below, as people don't really tend to look up all that much.

If you don’t have control of a firefight, don’t go chasing the kill. If it’s one person just roaming around, there is more risk associated since one death is enough to eliminate you from a match. If you’re just chasing after them, firstly, you’re making a lot of noise. Second, because you’re making a lot of noise, they could be baiting you into a trap. Instead just slink back and go back to your original strategy, keeping an eye out in case they come back. 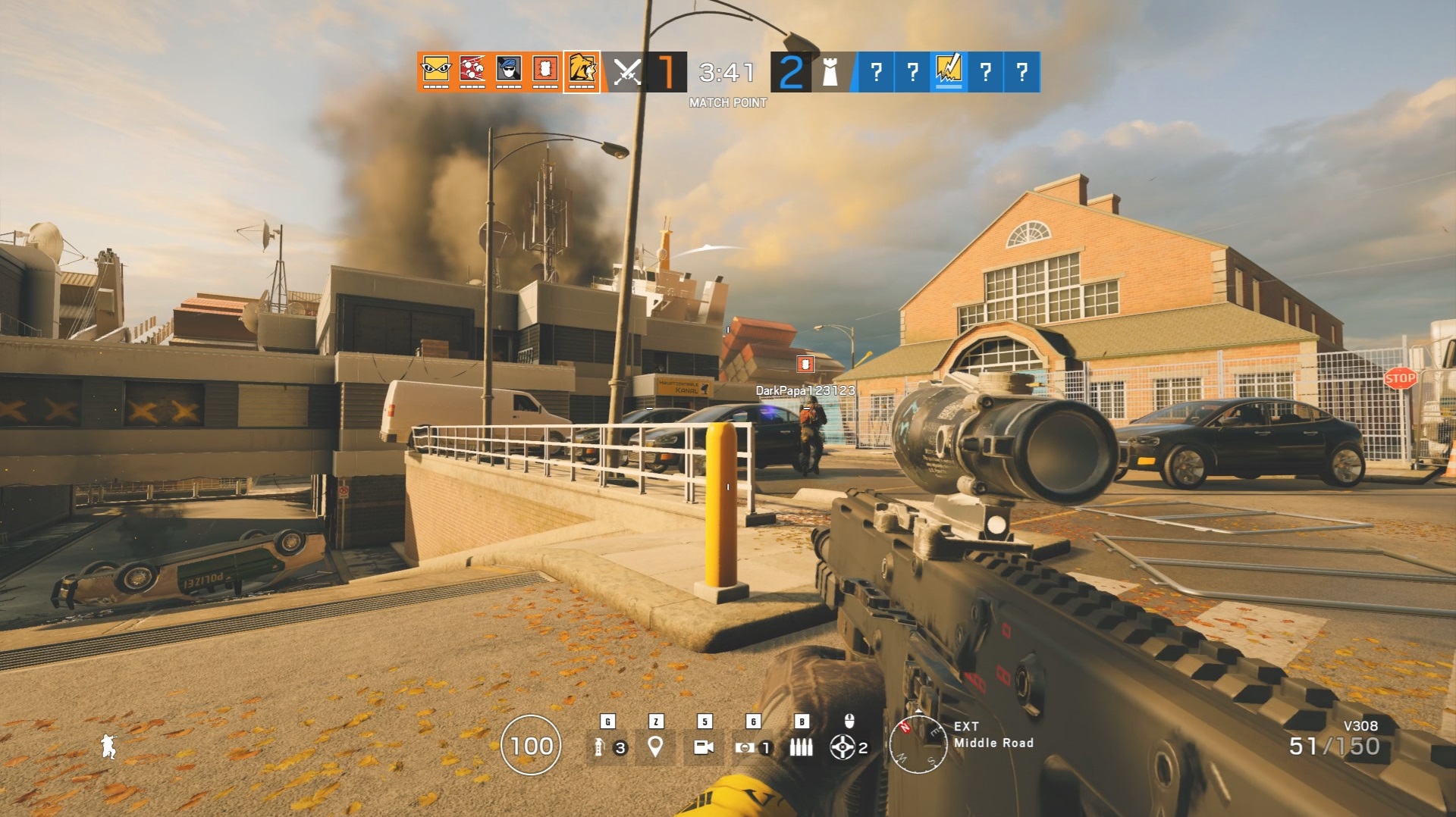 Half of the players in each team will be on the attacking side, either to secure an objective, rescue a hostage, or defuse bombs. It can be tempting to go in with everything you have if you know where the enemy is, but there are quite a few things to consider during any given match.

For example, if you’re attacking in a decent position outside and know an enemy has been through a location recently - say if you use an ability like Jackal's footprint tracker, wait a tiny bit to see if they come back. Don’t camp there for the entire match though as your teammates will need backup eventually.

Attackers also have their own Intel that all too often players waste. If you find the objective when using the motorised drones, get out of there as soon as you can and hide your drone somewhere that you can see in order to monitor the enemy position. They’re also useful late-game as you can see if the enemy is defending an objective and if so where they are.

Patience as an attacker is more than a virtue, it can be the difference between winning and losing. Approach any buildings very carefully and if storming the point, try to use a more unorthodox approach such as coming in from above or while abseiling. It's all about trying to be as unpredictable as possible. Occasionally due to the makeup of the enemy team this isn't always possible, but that shouldn't deter you. 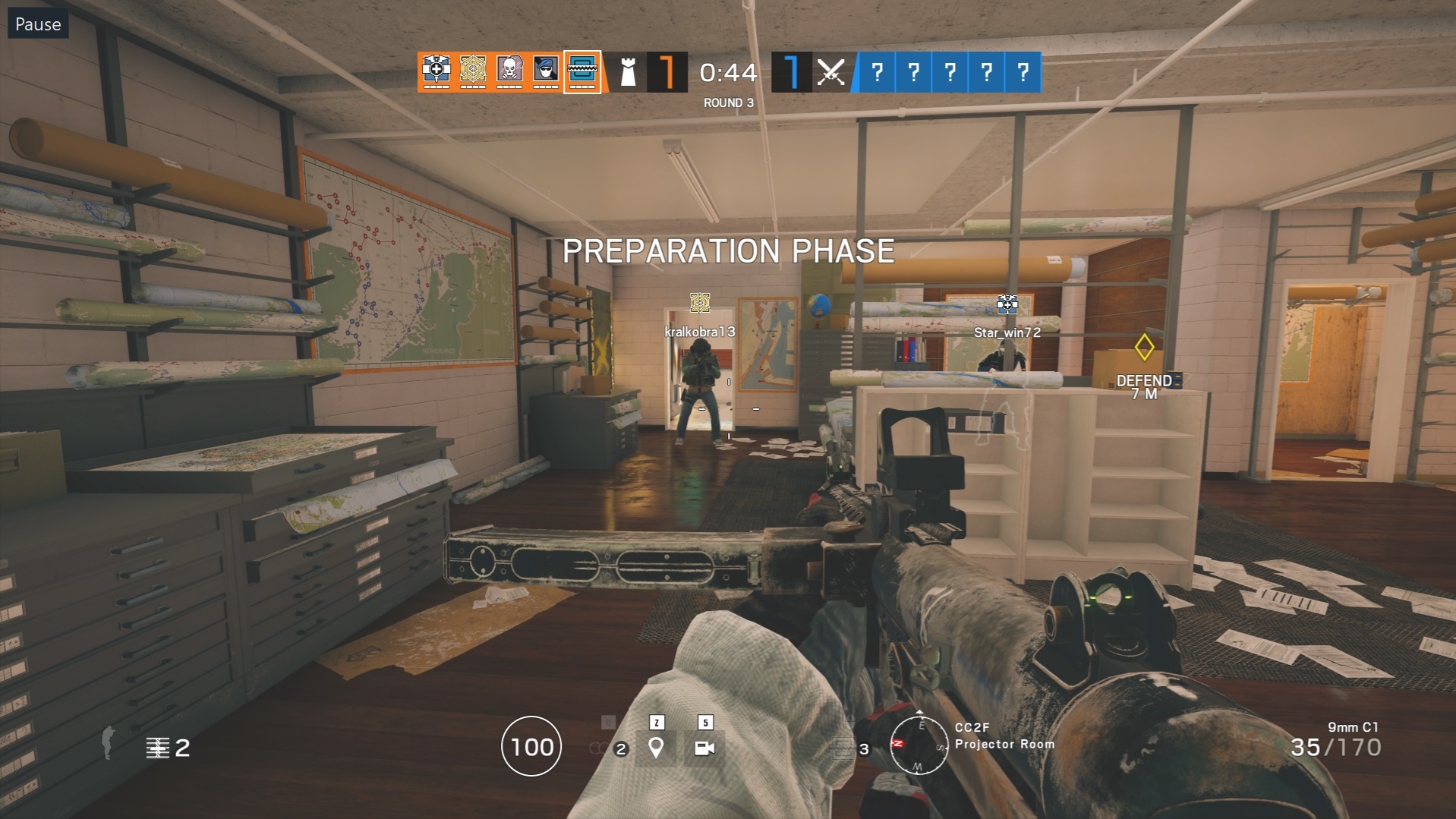 There are times where the enemy never find the objective and so have to go in blind. Once the game begins, you can look at the cameras to see where they'll be approaching from, then coordinate with your team to deal with the situation as it arises. There are cameras dotted around the perimeter and inside the complex itself, but all are vulnerable to any gunfire from the enemy team. Some defensive operators also have unique cameras, but really they should only be used if that player is no longer living. If you have died, you can still use the cameras, but try to verbally communicate where the enemy is rather than spot them using the command, as this alerts the enemy to the camera for them to shoot at.

It may be tempting to barricade everything in the beginning of the round to make it hard for the enemy to get in. This does also mean that any teammates whose operators are more roaming defender orientated are going to get shut out too, making it more difficult for them to score kills. Later in the game however, if the enemy is still way too far away, then barricade up and hunker down.

Perhaps more importantly for defenders than attackers is the concept of knowing your role. Some specialise in defending the objective with their skills, meaning they're going to want to stick close to the objective. Others will want to skulk around and try to take the enemy team by surprise.

Those were some tips to get anyone who hasn't played Rainbow Six Siege in quite a while, back into the game. By changing a few behaviours, you should be able to be competitive, maybe even snag a couple of kills. Don't be too disheartened if you die too quickly, as it's good to get that experience so you don't fall for it again. Once you're at the stage where you're a little more confident, you can check out our guides on the characters or maps from the contents above.