Our Alec had a rum old time with Sea of Thieves' beta version, but the rest of us landlubbers will have to wait until March 20th before we can hoist the mainsail, scrub the poop deck, and [insert third funny-sounding nautical thing here]. In the meantime, there are brows to furrow and consternation to be had about microtransactions, loot boxes and the like. If you like the cut of Thieves' jib, you'll be pleased to hear that there are no loot crates planned, and that there will be no microtransactions...at least at launch. You may be less enamoured with developer Rare's plan to implement them as part of the game's first major post-release update.

Speaking to IGN, executive producer Joe Neate said that the team's "focus at launch [is] on a great game experience. When we deliver this first major update, that's when we'll turn on the ability for players to spend money optionally."

Using a currency you'll be able to acquire "through normal play", players will only be able to purchase items that "add to the fun, social nature of the game." So nothing that makes you more powerful or that shortcuts progression - for example, the first items you can buy will be trusty pirate pets. Monkeys, naturally, will be worn on the shoulder, as I believe they commonly are in Belgium, while cats will patrol the boat, probably in search of herring. Slightly worryingly, Neate seems very keen on players being able to shoot cats out of cannons, reasoning that "it'll land on its feet, it's a cat, it'll be fine!" What's the number for the RSPCA, again? 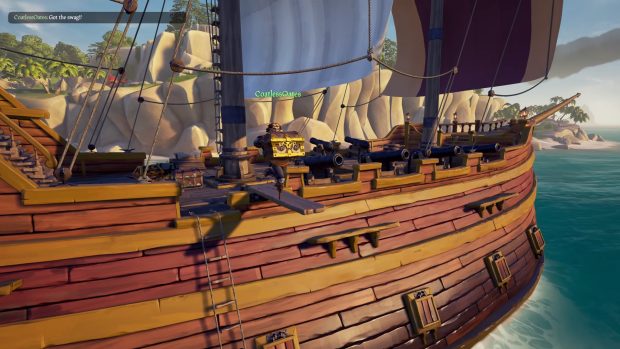 Another idea floating around is consumable potions that will temporarily alter your appearance, for instance by making your character appear old. It's clear that Rare's plans aren't quite nailed down yet, but whatever ends up being available from the in-game shop when it opens (according to IGN) around three months after release, Neate says that "you'll always know what you're getting - so that means no loot crates." Which is nice to hear.

If you're wondering whether your PC is up to snuff for Sea of Thieves' impending release, have a gander at the system requirements, which were released yesterday.