Has yer galleon got at least 4GB of RAM? Alas, if ye be missin’ that component, you'd best stay in port. *Ahem* Rare have announced the system requirements for their upcoming co-op pirate simulator Sea of Thieves. The game, which is due out on March 20th, has been heavily marketed as an Xbox One exclusive, but it will also be coming to the Microsoft store for anyone wanting to play it with a mouse & cutlass providing you’ve got a PC that can handle it.

The spec list itself is more of a spec table, seen below. It’s divided up into six categories, beginning with the absolute minimum requirements which they describe as ‘cursed’ and going right up to the beefiest of rigs, which they term ‘mythical’. Amazingly, the game can run on an integrated GPU with a measly Intel Iris CPU, although this locks it to 30fps and only displays at 540p. From there, the specs scale up about as you’d expect, with the game comfortably running on a trusty old GTX 770 or Radeon R9. If you’re wanting to taste the salty spray as it flies out of your monitor though, you’ll be needing an i7 4790 or a Ryzen 5, in tandem with either a GTX 1080Ti or Radeon RX Vega 64.

Click on the image to make the table bigger. 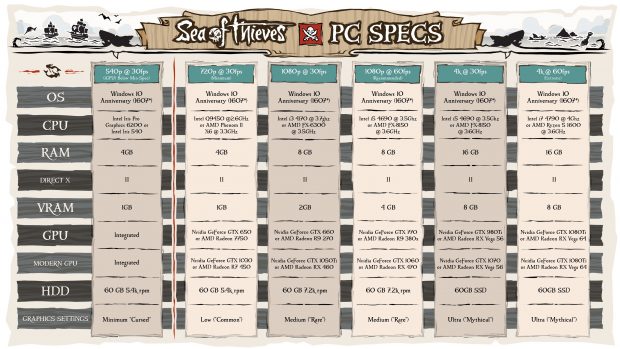 If you're still unsure about whether or not you want to set sail on the high seas, check out Alec's impressions of the beta for a clearer view of what you're getting. We'll also of course have a review when the time comes.