Bosses in Sekiro: Shadows Die Twice are not exactly well telegraphed, but the Chained Ogre is largely considered your first real test of your Shinobi prowess, though if you know how to do so, this fight can easy if you find a certain item that can help you immensely, and use the environment to ambush this shackled beast. Read on if you're struggling with this first boss.

Those new and old to the library of From Software may wish to know more tips and tricks to get started, as well as some of the more complicated things that can occur while playing. Head to our Sekiro: Shadows Die Twice guide hub for everything you need to know. There is now a dedicated Sekiro: Shadows Die Twice boss where you can find tips for the many bosses of the game.

This guide will go through each of the Chained Ogre's health and attacks, as well as the strategies to fighting him. It will also give you tools that you'll need to have in order to fight it effectively. 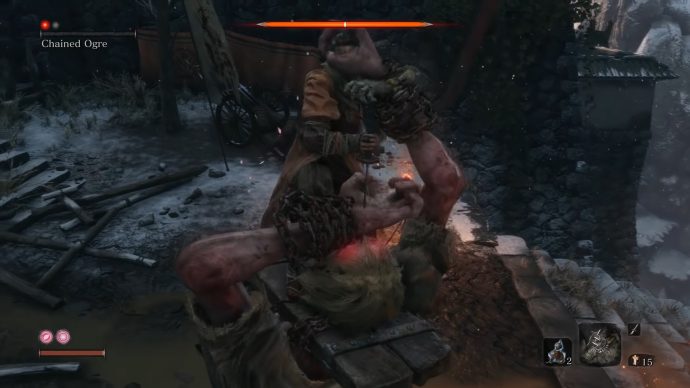 With only two health bars, the Chained Ogre doesn't have any more health than other larger enemies you'll have faced up to this point. The difference is that the Chained Ogre is a real monster in comparison. He has four attacks that he can pull off in both phases. His first attack will be to kick twice - once with his left and once with his right foot. Just keep out of the way of him. He'll also grab both of his hands and slam it downward, which you can dodge to the side to leave him open to a counter attack.

His two unblockable attacks (preceded by a red symbol flashing up on your HUD) are scary. Both involve him grabbing you, which if that happens will take away over 50% of your health. The simple grab is used when you're close to him, so just dodge to the side to avoid this. You'll see a prompt to grapple him too, so make sure you use that - more on why in a bit. The second grab is much more terrifying as he'll dive forwards to grab you. Make sure you jump high or grapple to a higher ledge, rather than dodging this attack, as it's a lot more consistent. This will also give you the same grapple prompt, allowing you to get back into the action. 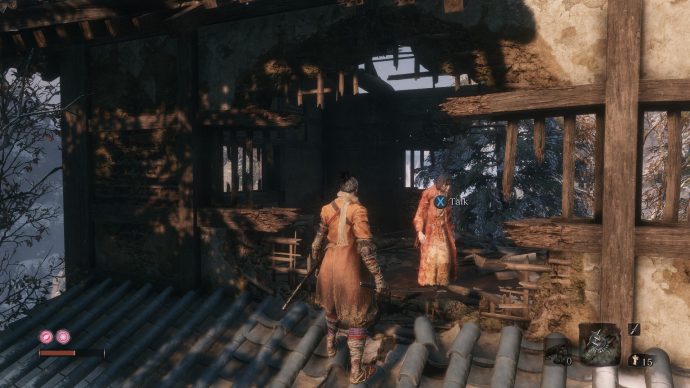 There are a couple of things you'll need to do in order to get an easy victory against the Chained Ogre. The first is that you'll need to grab a bell from Inosuke's mother - she's the one who is in the burnt out house not far from the Outskirts Wall - Gate Path idol. This will then unlock the Hirata Estate for you to explore. There you'll be able to pick up two new Prosthetic Tools, but the one you want is the Flame Vent. This will emit a burst of flame in front of you upon use, costing three Spirit Emblems per use.

The second thing you need to do is cheese the boss. Kill the two enemies just outside of the Outskirts Wall - Stairway idol; they're the ones sitting by the fire that you can eavesdrop on them - which in this case is the clue about fire. You may be tempted to run at the boss and begin wailing on him, but turn left and head up the hill instead. There's a chap with a spear that you'll need to kill first. If you've unlocked the Mikiri Counter skill, this should be a cakewalk.

Once you've done so, run past the Ogre and head back towards the Idol until you get to where the fire is. Turning right and up the ledges, there's a burning fire. Jump up there and make sure you're on the side of the fire closest to the idol. The Ogre will lose track of you and head to its default location, just a small way up the hill. It is entirely possible to sneak up on him if you hug the left part of the wall leading up to him. Get to his back and press the attack button once it there is a red glow to immediately take away one stock of health.

As for the second part, this is where the fire comes in. Let him attack you, making sure you dodge any of his attacks. Some of them will allow you to grapple onto him. Do so, then as you land, immediately use the Flame Vent. This will stagger the monster, leaving him open to many attacks. Take five swipes at him, before getting ready to dodge his next attack. As he's recovering from whiffing the attack, use the Flame Vent again, before attacking him some more. One final tip comes from the comments section of the previous version of this guide. Thanks to user "Guineapig" for pointing out that dousing the Ogre in oil beforehand will actually make the fire effect linger, dealing more damage to it. This is actually a useful tip for some of the more minor "sub-bosses", so feel free to exploit that when you can.

You'll get 105 experience, a prayer beads item that can be used to upgrade your stats, and the "Shinobi Medicine Rank 1" item which boosts the effectiveness of healing items. So those are our tips for defeating the first real boss of Sekiro: Shadows Die Twice. Coming up next is Gyoubu Owina - a spear wielding samurai that fights on top of his horse. Find out how to beat him in our Sekiro: Shadows Die Twice Gyoubu Oniwa guide.