As the first "boss" in Sekiro: Shadows Die Twice, Gyoubu Masataka Oniwa makes quite the entrance into this gladiatorial arena, with bodies strewn all about the place. Bounding up to you aboard his massive steed and bellowing his name, he proudly declares that you will not pass. He's no Galdalf the Grey, and he's actually really easy to pass.

This boss guide will take you through Gyoubu Oniwa's attacks, the strategy to beat him, and why the grappling hook is so good against him.

This step isn't absolutely necessary to win the fight, just to the rear of the battlefield and up some stairs, there is a merchant nearby that has firecracker explosive charges available. This is a Prosthetic upgrade that can be fitted at the Dilapidated Shrine, and costs 500 sen to purchase - which you can just farm from repeatedly defeating enemies. While I've not personally tried to purchase this upgrade at this point of the game, since I discovered it far too late to attempt it, it is definitely possible to disturb the horse by letting off some loud explosions. 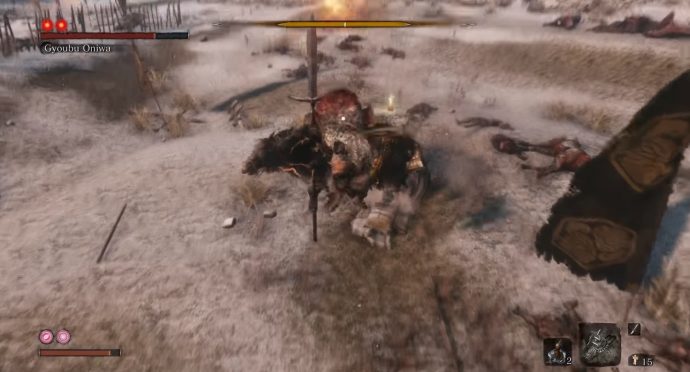 Since he's aboard the horse, Gyoubu Oniwa is a very quick enemy, but he's also very, very big. When at all possible, get as close to the horse's rear as this is where you'll be safest. All of his close range attacks are blockable and they're very easy to deflect. Since his attack speed is very slow, you will likely not get hit, even if your posture is broken. Deflecting his attacks is preferable as his posture is severely affected by this, so block at the correct timing (thanks to user "suibhne" for pointing this out). However, you should be looking out for the unblockable attacks, so if doing both at this stage is too tricky, just blocking will work. However it's good to know when to deflect attacks for future battles, so try to deflect when possible.

He also has a nasty habit of running off, before either coming back or preparing a long range attack. When you are close however, there is a chance the horse will jump several times in his second phase, so you can either back off, block, or deflect these attacks. If you ever see the grappling hook prompt on Gyoubu, make sure you latch onto him. Not only will this close the distance, but it will interrupt his spinning swing-blades that have a surprising range and are unblockable. During the second stock of life, he can also charge with the horse with his spear out if you don't grappling hook him when you have the chance. This is dangerous as he can impale you onto the spear and drag you for a short distance, before throwing you a large distance. This is his most damaging attack, so if he is charging, make sure you avoid the spear and the horse.

Keep at it for both of his health stocks to defeat him. Make sure you also land the deathblow to finish the fight. Doing so will reward you with Gyoubu Oniwa's memory - an item that can be used at the Sculptor's Idol to increase your strength. You'll also get 1000 skill experience and a Mechanical Barrel - which upon giving to the Sculptor - the old man at the temple - you'll unlock the ability to upgrade your prosthetics.

After beating him, I'd actually recommend taking a bit of a detour. You may have recovered a memory by offering the bell at the Dilapidated Shrine that the old woman near one of the Sculptor's Idols gave you. This will take you back to a memory three years prior to the game's events. Your first real obstacle here will be discussed further in our Sekiro: Shadows Die Twice Juzou the Drunkard guide, where we'll go over how to beat this large drunk and his many goons, standing in your way. You can also look at our Sekiro: Shadows Die Twice Chained Ogre guide for details on the previous boss fight.