In the previous guide, I made you backtrack slightly from the Lone Shadow Swordsman to just a little after the Chained Ogre fight. You would have ventured onward past the gigantic snake for that forced stealth section, but there's another direction where there's an ominous sign. According to the locals, normal weapons weren't able to quell a monster in the caves. Delving into the caves, there is a small glimmer of a sword, whose holder seems to match the description of the sign. I hope you're prepared for this one, because if not, it's going to be a very bad time.

In this guide, we will go over the Headless man's attacks, why having Divine Confetti is mandatory, and why you should never, ever, turn your back on him. Spoilers - it's pretty gross.

How to kill the Headless

Before you even leap down, there are a couple of items that can make this fight manageable. Mandatory for this encounter is the Divine Confetti - a sword enchantment that temporarily buffs your weapon against enemies that use the Terror status ailment. Since the headless man has a terror imbued sword, this will make hitting and defending against him a little easier. 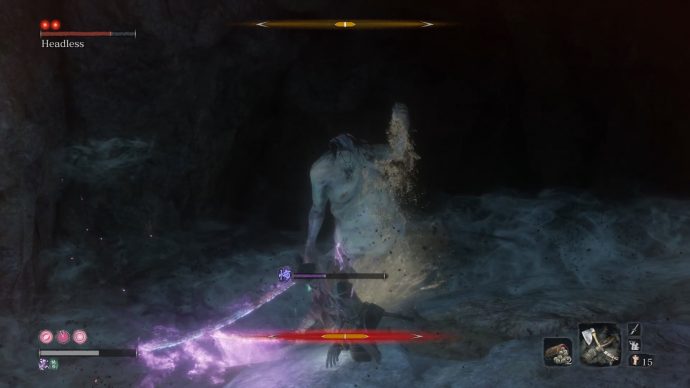 This is also the simplest way of dealing damage to him, like at all. He is immune to standard damage and takes a surprising amount of posture to defeat. You could use the Projected Force prosthetic art and defend with the Umbrella upgraded to at least "Phoenix's Lilac Umbrella", but this is more effort than it's worth. Pacifying Agent can also reduce the amount of terror you accumulate when hit. If you need more of the Divine Confetti, I highly recommend heading back to Ashina Castle interior (just before the Genichiro fight) and killing blue samurai as they have a small chance to drop it.

So what is Terror? If you remember the Curse status ailment from Dark Souls it's just like that, in that it instantly kills you. You can get up from being killed this way, so it's not the end of the world if it happens, but it is very annoying. His standard sword swings are all blockable, but even blocking them will accumulate terror on the gauge. Thankfully the swings are very predictable and slow, so deflecting them shouldn't be too tricky.

He does have one other nasty trick up his sleeve. The dust cloud he summons can not only make him teleport to just behind you, it'll slow you down to a crawl where dodging is very difficult. Don't ever turn your back on him when you are slowed as he will try to use a rather disgusting unblockable grabbing attack where he will attempt to remove your "Shirikodama" - from the wolf's rectum. Yes, there's folklore behind that one, even if the Headless is not even close in likeness to the yokai in question.

As for the strategy to kill the headless, as long as the Divine Confetti is active, you can slow down his assault by constantly attacking him. He'll be stunned briefly after most hits, as long as he's not attacking with his sword. Deflect those attacks when they come and just keep hitting him. After two health stocks, he'll be defeated and will reward you with Ako's Spiritfall - an item that increases vitality and posture damage for a short time by spending Spirit Emblems. You'll also get 812 experience towards your next skill point. 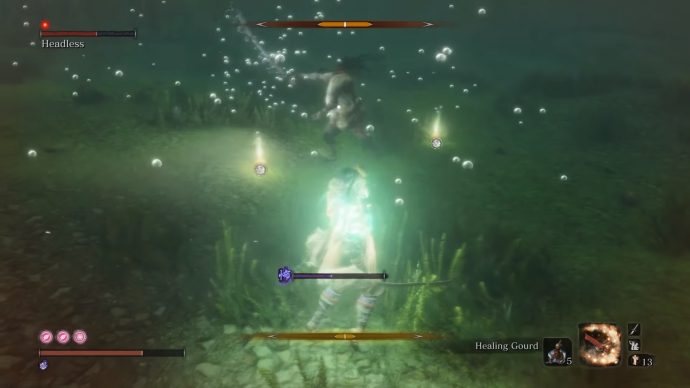 How to defeat the Underwater Headless

You know what's worse than having a headless demon that can wreck your day? Having one that's underwater. It's surprisingly fitting that a monster that behaves like a Kappa on land would also be a terror of the deep. This is also new territory for any From Software game: An underwater boss fight.

How does it work? Well you'll be locking on, swimming in and getting a few swipes before darting far away. His sword slashes still have terror inducing properties, so you really don't want to get hit by them. The good news is that you can deflect them if you wish. The bad news is that the Underwater Headless has an apparition that will also attack you - though it could be a good idea to use a Snap Pea to dispel the illusion.

This fight may not feel all that precise, since you have so much mobility. But generally hit and run tactics are the way to go. Just be sure to dodge any of the wave slashes that either Headless creature dishes out, and you should eventually take it down. You can also get an extra boost in damage with Divine Confetti, though thankfully this headless form is not immune to standard damage.

Now that you've been exposed to Terror, it's time to head back into the cave just after the Lone Shadow Longswordsman to fight against another Terror wielder. Join us then for our guide to learn how to easily beat this boss. If you haven't defeated the boss before it, head to our Sekiro: Shadows Die Twice Lone Shadow Longswordsman if you want to find out how to defeat this purple ninja.