In order to achieve the Shura ending, you'll need to defeat the lord of the castle, Isshin Ashina. You'll have to overpower his retainer before your fight with this noble begins and he will test your samurai abilities to the limit. So draw your sword and steel your resolve, this fight is going to be a tricky one.

This boss guide will go over all three phases for one of the final fights of the game. It all starts by betraying one of your closest allies, who you'll have to fight again should you fail to defeat Isshin. I would highly recommend bringing any healing items that deal with burn damage to this fight, in addition to the regular healing items for your health.

How to defeat Emma, the Gentle Blade

Emma will stand against the wolf, believing him to be Shura. Her attacks are fast, but the vast majority of them are able to be deflected with the proper timing. This all comes down to trial and error, so if you're not sure, hold down the block button to scope out her attacks. Make sure you also retreat and hold the block button if your posture reaches a dangerously high level. 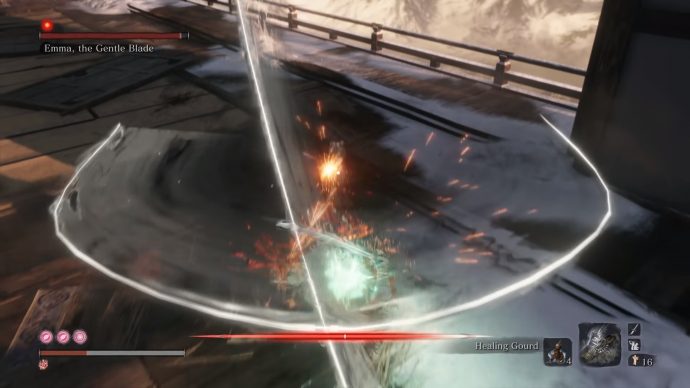 However there are a few attacks to watch out for as they're windows of opportunity. The main attack to try and avoid at all costs is when she puts her sword away. She'll follow that up with a very quick cross slash that she performs in front of her. Try to dodge so you're behind her, then get a couple of hits in as she recovers from executing the attack.

Her unblockable attacks come in three forms. One is a lunging thrust that is easily telegraphed and can be Miriki countered. Her sweeping attack is a little harder to read, but you can leap and kick her to stagger her a bit. If the unblockable Kanji appears and she's put her sword away, jump away from her as if she grabs you, she'll perform a throw which can be followed up by any one of her attacks to potentially one-shot you. You'll want to roll away if you are thrown. She shouldn't be too hard to take down, but then the real fight begins. 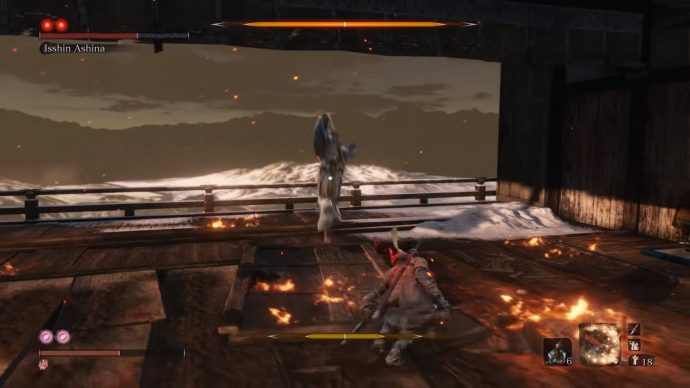 In this stage, Isshin is manageable to fight fairly. A lot of the time, you'll need to bait him into attacking you, so when you're close, swing the sword once before looking to deflect whatever attacks he has to throw at you. They're mostly regular sword swings and you can learn the timing of these with ease.

There are several attacks that you can exploit. If he ever raises his sword above his head with two hands, dodge to the left and get behind him. He'll perform an overhead strike twice which can do a lot of damage to your health and posture, so it's best to avoid altogether. You'll also be able to get a few sneaky hits in while he's attacking.

When he puts his sword away, don't jump yet. Wait for him to move and the unblockable symbol to appear before leaping and kicking him in the face. He can also perform a three hit combo where the second hit is a stabbing motion. The third hit is a proper thrusting attack that is able to be Miriki countered, which will give you a sizeable lead on the posture front.

A good tip for this phase, and the second one, is to keep him to the centre of the room. This will allow you the most breathing room and ensure you're not caught up against the wall when a nasty attack lands. If you learn the timings of his attacks and dodge the unblockable ones, it shouldn't be too long before you plunge your sword into his chest and begin his final phase. 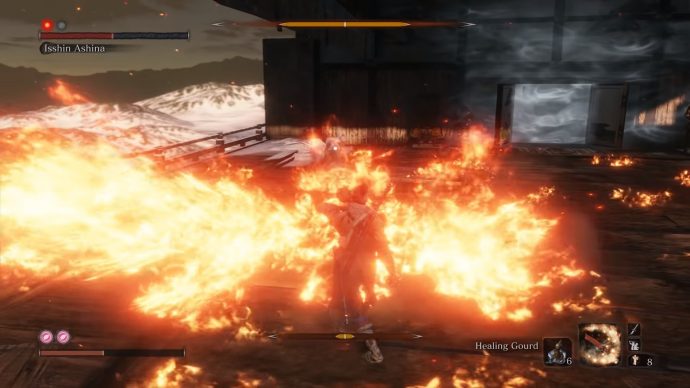 Fire is the main cause for concern in this final phase. As soon as this phase starts, or indeed at any point where you hear him growling to himself, use a firecracker to interrupt the attack. If you don't, he'll ignite the entire room with columns of fire that are very hard to avoid. If you have no firecrackers left, look at the floor when the sparks fly from Isshin. As long as you're not standing on the embers, you should avoid the attack.

His overhead slash is now imbued with fire, so make sure you're dodging wide to avoid the overhead, then deflect his second attack to be on the safe side. You'll then be able to get one hit in on him. If he stomps the ground, get ready, as flames will fan out in a wave, which you'll need to jump to avoid.

Aside from these attacks, the fight is largely similar to the previous phase and you can get the same attacks of opportunity when successfully avoiding and deflecting. Get his health bar down to about half before accumulating posture damage and finally dealing a deathblow to finish the fight. For completing the fight, you'll get Isshin Ashina's memory, as well as 10,000 experience towards your skill level, and the "One Mind" combat art. This costs some spirit emblems to use, but it begins with an overhead slice, before putting your sword away with a "nigh invisible" series of attacks.