If you wish to turn off all the objective markers, glowing item highlights, and even guiding paint splashes in Shadow Of The Tomb Raider, you will be able to. Leap and puzzle without any obvious assistance, if you please. Or if you find those handy and want all the help you can get, hey, the game will let you do that too. The game's makers have detailed its difficulty and accessibility options, and it all sounds pretty great.

Shadow Of The Tomb Raider splits its difficulty settings into three categories--combat, exploration, and puzzles--with easy, medium, and hard levels for each. Players will be able to change any of those at any time, which is grand. Though if you really want a challenge, 'Deadly Obsession' difficulty locks a save to hard with a little extra difficulty sprinkled on top. The combat difficulty level does largely what you'd expect, but the other two are quite interesting.

The exploration difficulty level can give more time to save Lara from falling on difficult climbs, make base camps pre-lit for Lara, and tone down or even remove the splashes of white paint that are used to subtly indicate the main path through the world. That's good, that. As much as I value the help they provide some, I do relish the opportunity to feel like I'm exploring rather than just following the trail of the world's sloppiest painter & decorator. 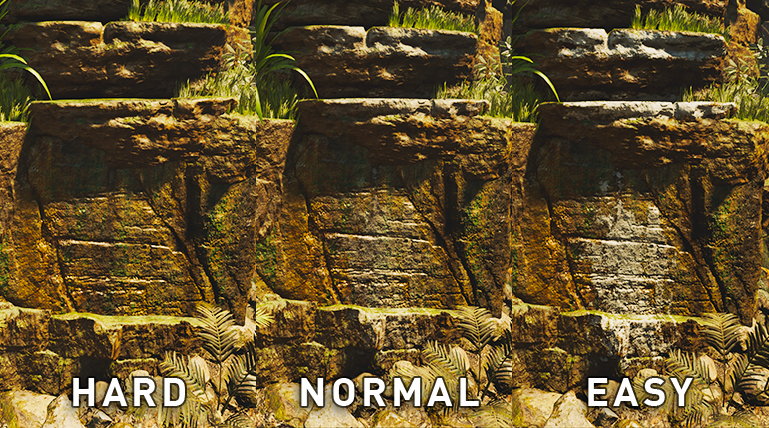 Players will also have the option to disable object location markers no matter what difficulty they're playing on.

Over in the land of puzzle difficulty, the game can give or take precious seconds from timed puzzles, have Lara give hints and even clearer hints, and add or remove the visual hint of making key objects glow.

The other accessibility options sound grand too, including things that most games skip over, such as:

See yesterday's Tomb Raider blog post for more on all this.

After all the fuss made over graphics options menus in recent years, I am glad to see a focus on menus that matter. I don't much care about the latest story of how Lara really really for real became a mass-murdering grave robber for reals ("Lara will ultimately be forged into the Tomb Raider she is destined to be," the marketing blurb says), but I do like this.

Shadow Of The Tomb Raider is due out via Steam on September 14th, priced at £45/€60/$60. It's made by Eidos Montreal, with a little help from Crystal Dynamics and a PC port by Nixxes Software, and published by Square Enix.