"We all die, everything dies, every living thing dies."

Nicolas Guérin is reassuring me. He's the creative director at Thunder Lotus Games and they're working on Spiritfarer, announced at E3 2019 as a "cosy management game about dying." I need reassuring because I've played a 15-minute demo of Spiritfarer and I'm worried that a game that treats death lightly will make light of the suffering that is death's bedfellow.

On that note, the game is already a success. Spiritfarer is being made by the developers of Jotun and Sundered, and like those it is filled with beautiful, hand-drawn art. The difference here is that instead of boshing giant monsters, you're a boatkeeper ferrying spirits to their ultimate destinations. Think of the Greek myth of Charon and his boat across the River Styx, only instead of eyes like "hollow furnaces on fire," you're a fresh-faced and bushy-haired young girl named Stella, who would look more at home in an anime than on the side of a funerary vase.

Think also of Stardew Valley. This is a management game, and you'll be expanding your boats by placing new rooms, as well as planting and harvesting crops, fishing, mining and smelting ore, and more. Where it differs - aside from the side-on perspective - is that your farming isn't done for its own sake, or the sake of making money with which to buy better farming equipment. You do it in order to tend to the needs of your passengers.

In the demo I played, the boat was filled with characters, including a refined deer, a jolly and musical frog, and a snake, named Summer, who "moves around like a human because she doesn't want to believe that she's a snake yet," says Guérin. You can talk to all of these characters, visit the homes you've built for them on the boat, offer them food, and at any point offer them a hug. There's a real sense that these are people - anthropomorphic animal spirit people - that you care for and who care for you. "Care" is one of the key verbs in the game's trailer, and so I asked Guérin if he was familiar with the concept, popularised by designer Brie Code, of "tend and befriend" as an alternative to the "fight or flight" response games normally stimulate in us. It turned out he was, and is friends with Brie Code, but didn't know she'd written about the subject.

"Maybe it's a bit of a knee jerk reaction from me and from us, because we've been doing games for a long time, and how can you work and not do violent things?" said Guérin. "A funny story, but if you'd been with us at E3, we had the booth and the game next to us was Zombie Army 4, which is an awesome game where you have to headshot zombies. We had Doom Eternal on the other side. There was Bleeding Edge right across from us. Borderlands 3 right behind us and Gears of War. So we were surrounded by games in which you have to shoot things in the head. Which is fun. I mean, I love shooting things in the head. But honestly, working on a game where there is more concept of caring for things is such a nice change of pace." 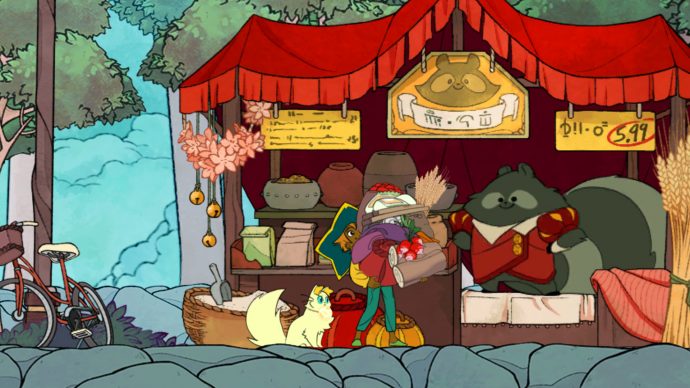 Although this is Thunder Lotus's third game, Guérin only joined the studio around 18 months ago to work on Spiritfarer specifically. Prior to that he was at Ubisoft, "stabbing people in the neck for eight years" as a designer on the Assassin's Creed series. He was keen to stress that he loves those games, and has no issue with violent games in general, but part of what drew him to Thunder Lotus was that they wanted to make games that had broader cultural meaning, and that it was a place where he could "do something that mattered." "I think as a medium we might want to evolve a bit," he said.

'Tend and befriend' sounds like the prism which the game's other systems run through. A passenger will teach you how to fish, and you'll use that ability to catch fish that you can cook for your passengers. Summer, the snake, is vegetarian, and so you'll need to grow and harvest crops to prepare vegetarian meals for her. Each passenger has different requests for the design of their room aboard the boat, and so will require you to mine, smelt or otherwise gather different kinds of materials in order to build it. It's designed to be low-pressure - your guests will not starve if you fail to feed them - but that's where the cosy vibes and beautiful animations help the most. In this world where wind sweeps your hair just so, where you have a pet cat who follows you everywhere and who you can stroke at any moment, you want to be kind and invest in these friendships.

Which brings us back to the inevitable: every living thing dies. In the demo I played, it was Summer, the snake, who was preparing for the afterlife. She asked me to take her to her old home, in which she had left behind a family heirloom. Doing this involved setting my destination via a map on my boat, then using a rowboat to go to shore. The town was only a handful of buildings, but picturesque, and had a European style that again made it reminscent of the works of Studio Ghibli. I retrieved the item for Summer, helping her on her journey in readying for death. I also activated a shrine which granted me the ability to double jump. This is the kind of contrast that worries me. How do you stop Spiritfarer from running into the problems Alice outlined in her Gris review, in which a similarly beautiful game was used to communicate a patronising metaphor for bereavement. 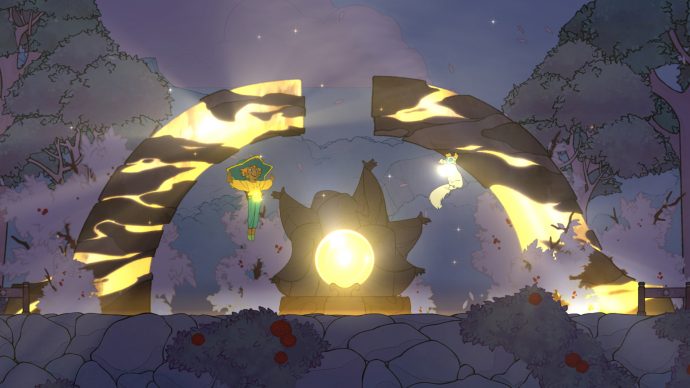 For starters, while it's open to player interpretation whether your passengers are already dead or readying for an approaching death, you never meet any spirit's friends or family members. The people most likely to grieve their departure do not feature in the game. When Summer leaves the boat, that leaves the other passengers, who are preparing for their own imminent departure, and Stella. I can envision a version of the game where players feel some distant cousin of grief when a passenger leaves the boat, and where Stella's bright-eyed idle animations and double jumps act as a comforting salve to help them continue.

The other answer is that Spiritfarer seems to be depicting a particular kind of death: one that is expected and, therefore, one where tend-and-befriend can potentially make it peaceful.

"We say that Spiritfarer is a game about death, because that's what's interesting, right? The idea of knowing that you are going away, and in that special moment, what do you want to do?" says Guérin. "I researched places where people go to die - end-of-life care hospital wards and end-of-life homes. And it turns out loads of people die there, and they all know they're going to die, and you have tons of people working with them all the time. And they care for those guys. 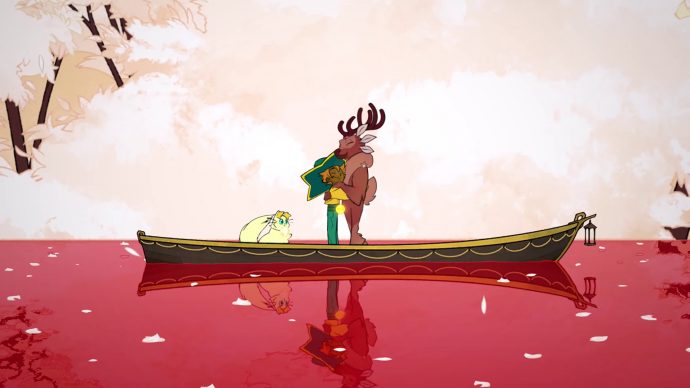 "Sometimes it's pretty sad because you have people who have no family, nothing, and they still go there and they have wonderful hospital staff caring for them. But the whole notion of being with someone that you know has a limited time on earth is only real when you know they're going to die," Guérin continues. "So we have to make sure that the whole notion of heritage and transmission goes through the spirits themselves. They are passengers, you have to care for them, you have to feed them, you have to entertain them in a way. More than anything else though you have to make sure they fulfill their last dying wishes.

"And on the other way around, those guys teach tons of things to Stella, and that's the real thing. All the spirits, they will teach Stella how to cook, craft, tend to her crops. It's through those people that you understand how the game is played, and because you understand that, you can in return, make sure that they are treated correctly."

It works, a little. I am somewhat comforted.

I looked up the Oscar Wilde aphorism that Guérin referenced, and it's likely that the line is related to something Wilde wrote in his first play, 'Vera; or, The Nihilists.' "Life is too important to be taken seriously."

My concerns were that Spiritfarer would be shallow, or perhaps even use its characters' deaths as a useful contrivance, shuffling actors off the stage when the player had depleted them of content. I still have concerns that Spiritfarer will present only a sanitised version of death, and allow people be tourists in feelings and experiences that it doesn't truly help them to understand. But through the acts of kindness you can show to your passengers, and the lessons they can teach you, it's at least treating life as important.