Subnautica may be the latest big thing in the survival sandbox sphere, but Endnight Games' The Forest was there first. Released as early access in 2014, it has evolved and mutated into a surprisingly deep blend of survival horror and sandbox. Today, it is officially finished, and version 1.0 has rolled out. Within, some quick thoughts on the new version of the game, plus a rather grim and violent launch trailer.

After a quick peek around, the final version of The Forest is a pleasant surprise, although it perhaps plays its narrative hand a little too eagerly now. It unquestionably looks and runs nicer than ever before (silky smooth at 1080p, maximum graphics settings on a laptop 1070), and the presentation is a bit slicker too, with the inventory screen having just enough physics object wiggling around to give it a lovely tactile feel and the lighting has also been overhauled at some point, making the long grass and caves far nicer to look at.

As of the release version, your handy survival guidebook starts out with a (slightly) more normal range of stuff to build in it, including a (most likely useless) SOS sign. Still, I do question why your kid's How To Not Die In The Woods book includes the blueprints for a chandelier made out of human skulls and bones... but at least it's not the horrifying flesh effigies made out of your foe's corpses that used to fill the back pages. Presumably you figure that stuff out on your own later.

In lieu of a full How To Colonel Kurtz guide, the game does start dropping spooky story threads on the player sooner. A thirty second walk/swim from my plane crash lay a small beach, with a yacht floating just offshore. I won't spoil what's within, though I will say that the game seems more willing to reveal its more Lovecraftian story elements right off the bat. Plus, at the back of the ship is a keycard-locked room, providing players with a mid-term goal on top of their short and long-term priorities of survival and escape. 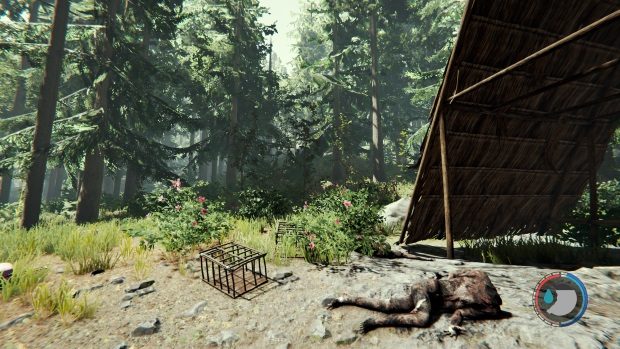 Among the other goodies introduced in the final cut of the game are several new craftable suits of armor, and a snuggly deer-skin outfit for early forays into colder climes. You can also find new sets of clothes in the various locked suitcases you'll find scattered around, which are purely cosmetic but nice to have, especially in multiplayer.

For the survivors who just want to see the world burn, there are now cans of hairspray to be found. In classic Blood fashion, these can be paired with your lighter to create an improvised flamethrower. The extra firepower might help as you work towards an extended version of the previously-present ending, as well as a new, alternative end. Endnight have clearly put a lot of effort into this last major update, though I expect minor patches and potential expansions to be on the horizon next.