For a while there, when I asked the filing system of my brain for The Outer Worlds it would throw up a card for that just said "The space one that isn't Outer Wilds". I only have so much processing power, and I will still call each of those games by the other's name at least once per time I bring either of them up. But after playing the hands-on preview, The Outer World's filing card has an addition in crayon that says "Yes. Good. Keep doing that" and also probably some grabby sticky fingerprints in jam from me, the urgent toddler.

For the benefit of your own filing cards, The Outer Worlds is a single player RPG by Obsidian Entertainment, who you may know from a lot of games you liked, including Pillars of Eternity and Fallout: New Vegas. It's a jolly, colourful sci-fi space romp. Imagine we are in a slightly grubby cocktail bar and I have scribbled FALLOUT X BORDERLANDS on a beer mat just as the bartender has given you one of those tiki cocktails you're only allowed one of per night. That is the correct sort of headspace. 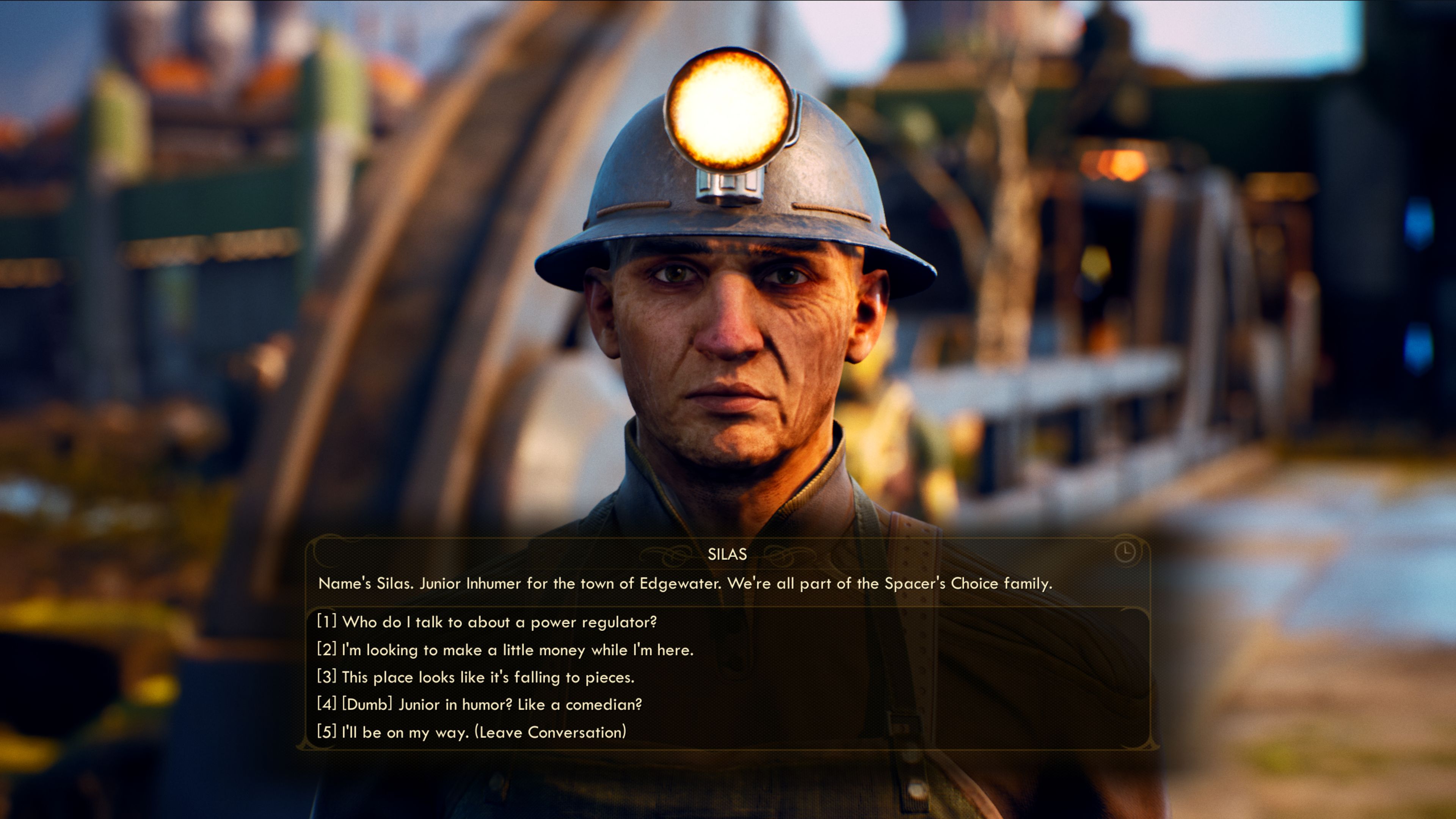 You play as a newcomer to a colony of planets -- the Halcyon colony, to be exact, and to be even more exact you're not new so much as late. Your colony ship dropped out of light speed and took the analogue route, so you've been a person-popsicle for 70 years by the time you arrive. In the interim, big business took over. Entire towns are owned by corporations. It's ultra-capitalism taken to the point where people will cheerfully say stuff about how they're part of the Big Fishing Bastards Incorporated family, and have jobs like Junior Inhumer instead of gravedigger. But there are also other groups who oppose the corps in various ways. I found a sort of charismatic cult leader called Graham, for one. (And in the game!) You could side with the cult instead of the corps. Or not! Who knows?

I played a big enough chunk of the game (including the opening 45 minutes or so, which I'm not allowed to tell you anything about at all. I can't even confirm if there is, for example, a character creator, but by inference that means I can't confirm there isn't one either, so I guess you'll just have to wait until October when this, a role-playing game, is released to find out). I roamed between whichever towns I liked, jumping around a rocky, inhospitable planet that was covered with weird plants and bright colours and suspicious ruins. Making a deal here, killing some very angry iguanas there, and generally doing whatever my whims dictated. I will fetch those bullets for you, Mr. Corpo, but only because I was heading that way anyway. And I will also relish reading the old files that say you're really shit at your job. 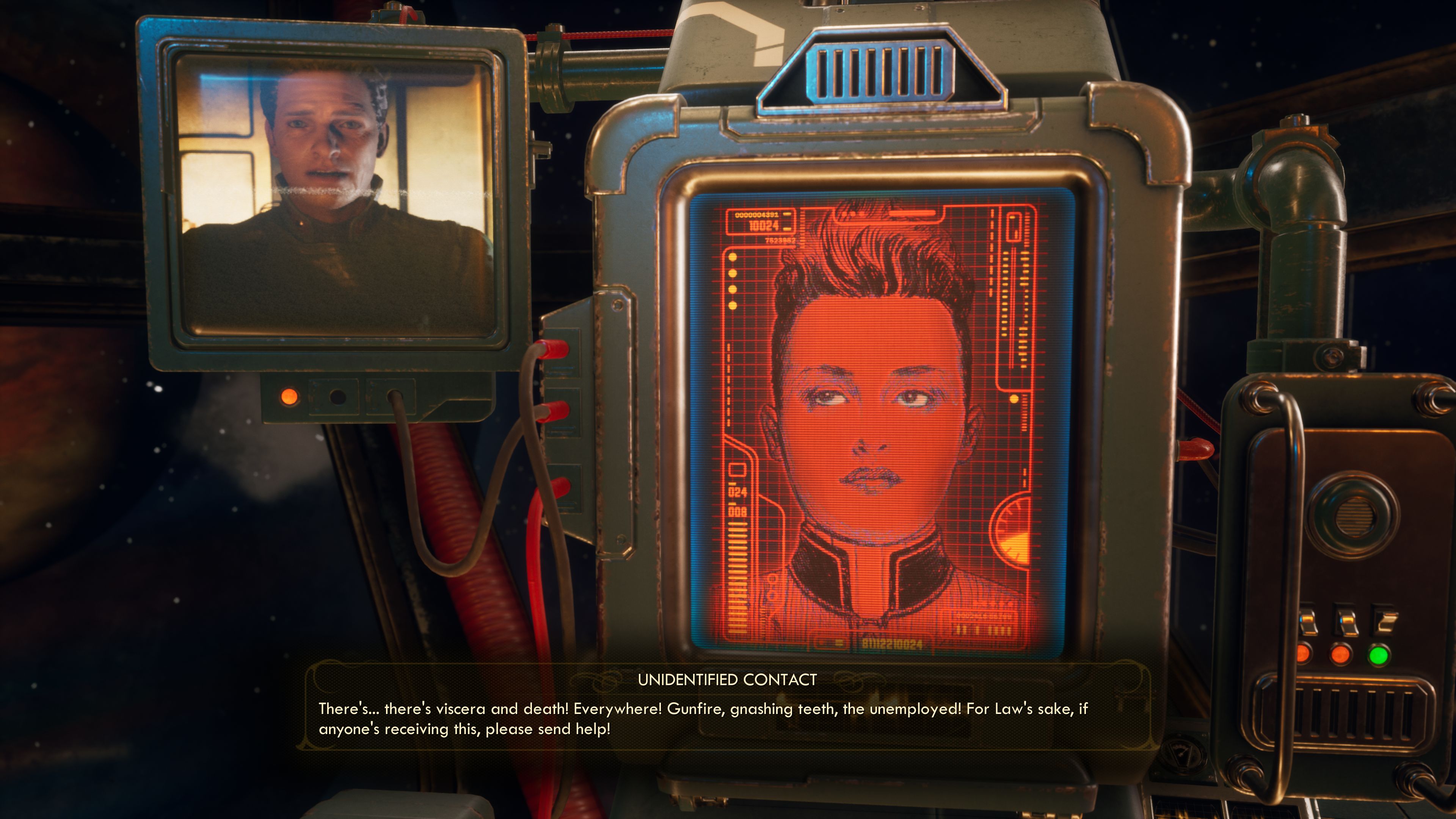 The options you have, or at least the ways you go about them, are partly determined by your character. Base attributes are locked in for the whole game, but they sketch out the broad shape. Details are filled in by levelling, when you can put points into your skills. They're split into general categories like Dialog(ue), Stealth, Melee and so on, with three skills to each. At first you can only boost a category as a whole, but once an individual skill hits a certain threshold you can pour points into it individually. Skills give you passive unlocks like +30% weapon reach or +100% chance to find pristine items while scavenging. On top of that are perks, purchased with perk points, so you can give yourself more health or something spicy like better headshot damage.

You get different dialogue options with different builds, for one, but also different solutions. I encountered a survivor shut in a room in the wastes. Her mate had run off with the key, so I could have trekked over to pick it off his corpse, but my skill in engineering was high enough that I could talk her through opening the electric lock from the inside. I was sent to a trade outpost that had been overrun by baddies, with the trader holed up in a building. It was above a system that vented poisonous gas outside, so the player character built for stealth could sneak into the control room, vent the gas, kill all the baddies without anyone knowing they were there, and waltz out like a proper cool boy. I elected to shoot them all up a good'n though, obviously.

The combat is a weird one. The weapons, although you can choose between a range of sniper rifles, revolvers and very big hammers and the like, all felt a bit light. There was no heft to them. Firing a massive great chaingun gave me the weird, off-balance feeling you get when you go to pick up a big box and it turns out to be empty. It also seemed like there's still some work to be done on enemy AI, given all their aimless running about. But on the other hand, I still really liked it because it is very good to shoot a man in the head using the slow-mo Time Dilation that all players have, and watch him fall over also in slow motion.

The Companions are also very fun. There were two in the parts I played: Parvati, a sort of slightly grungier Kaylee from Firefly, and Nyoka, who can reasonably be described as a hardass. It was evident that you can build relationships with them of some kind, since Nyoka asked if we could go and visit her friend, with a side order of explaining her trust issues, and they also chatted amongst themselves, or talked about places we arrived at. But mainly I enjoyed them in combat.

By boosting your Leadership skills you increase their damage and improve team buffs in general, so you can turn them into absolute beasts. Each has a signature move, during which time slows and the camera focuses on them. We poured loads of points into Leadership, so every time Parvati dusted off her huge ground-pound with an electric hammer, she exploded enemies into a delicious buffet of limbs and torsos.

But, typically, I enjoyed the non-combat mucking around the most. Whilst Matt wasn't sold on the humour, finding it perhaps too constant, I was on board because it's presence arises out of the natural absurdity of the hyper corporate framing. I liked the handful of strange characters I ran into, who were all definitely characters with a sharp italic, either winning or despicable, all throwing out potential mission threads to grab onto and follow, like a big silly Theseus dressed as Han Solo. 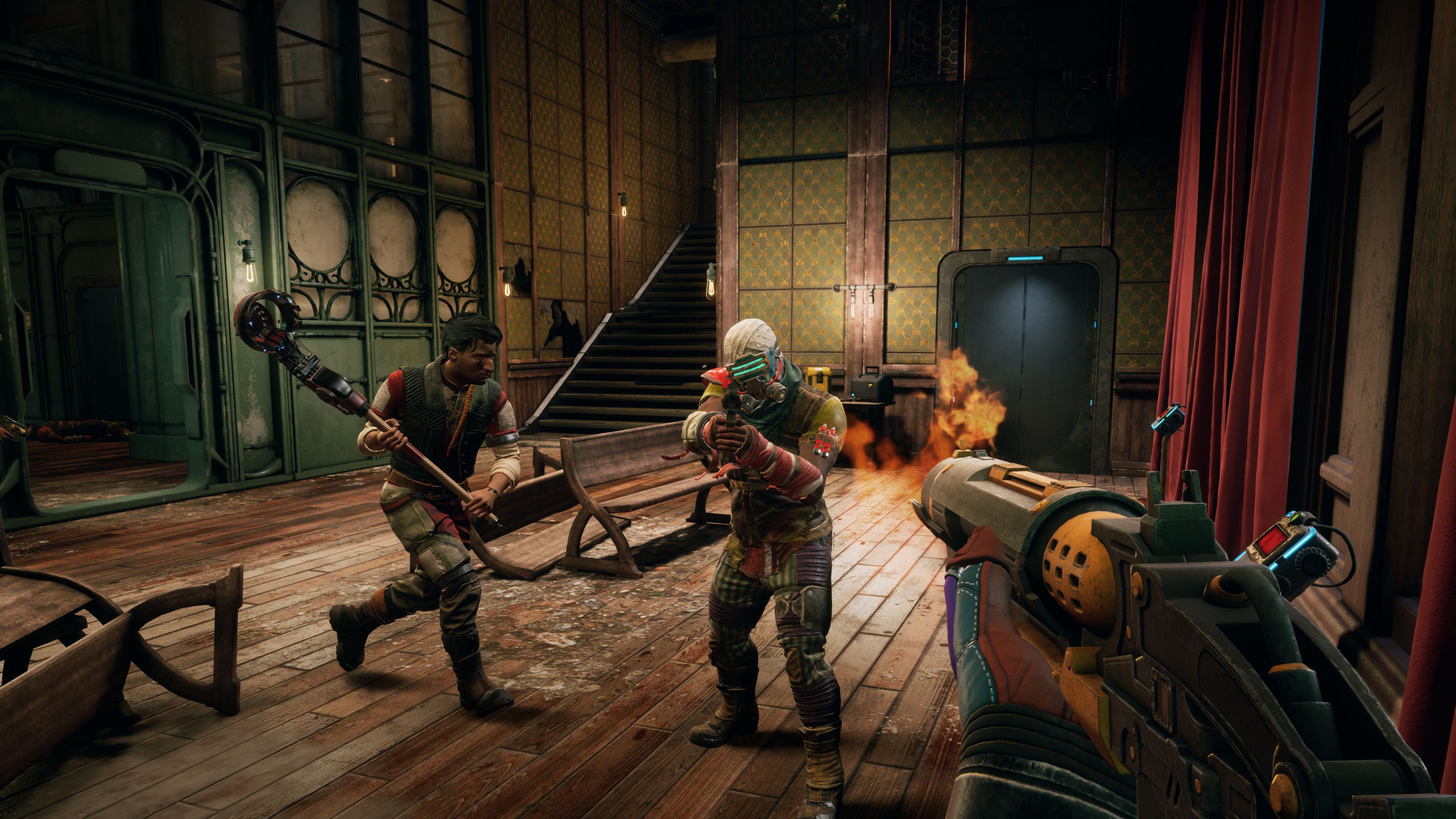 But I had more than one surprise mission event triggered by just walking down the street. An apartment block door opened and the cleaner started yelling about what he'd found in one of the downstairs rooms. Could have walked past, but instead: boom! Instant murder mystery (albeit not that mysterious. It turned out the shady thugs dun it). Upon entering one town a hysterical mother asked for help bringing her poor delicate son home. As it turned out, he was a large adult son who preferred not to come home, thank you, and suggested telling her he was dead instead. So do you do that, or do you force him to return home? Or attack him and kill him yourself? Or tell her he told you to tell her he was dead?

It's hard to know if the full game will be able to keep up the same density of surprises and options, but the preview for The Outer Worlds was options all the way down. Stacking options for easy storage and convenience. I can't, hand on heart, say the broad strokes of The Outer Wilds are original. It's quite an old-school style of RPG - but it's one made with modern polish and, crucially, no one else is doing it or has done it for a while now. So yes. Good. Keep doing that.