The big melee revamp for space-ninja loot n' shooter Warframe might be late, but Digital Extremes just rolled out an overhaul of one of its older, clunkier core parts. Alerts - time-limited side missions, rewarding players with money, crafting blueprints and the occasional bit of rare crafting gear - are out. In their place comes Nightwave, seasons of new story-driven missions delivered by pirate radio host Nora Night, with a progression track and less capricious reward store. This season, Tenno are hunting an escaped convict; The Wolf Of Saturn Six. The update is live - see the trailer below.

I can't say I'm sad to see Alerts go. They were a crapshoot, and players could miss items they needed unless they had the Warframe phone app alert them. Complete bounties on Nora Night's mission board to earn the new currency, Cred. This can be traded in for the kinds of items you'd have gotten from Alerts - most importantly, that includes Orokin Catalysts and Reactors - essential items which permanently double the mod capacity of any given frame or weapon, and are what many players ended up spending real money on.

Nightwave progression is similar to Fortnite and Rocket League seasons, minus any 'premium' option. Daily, weekly and special Nightwave objectives give experience which progresses you through a linear reward chain. Cred is on there, along with Forma (rare crafting goodies), and a bundle of cosmetic items. The rewards track also includes extra frame and weapon slots, which were previously premium-only items. In the Cred store, you've also got the usual collection of alternate frame helmets that you'd normally see on alerts, plus a couple weapon blueprints. Reactors/Catalysts aside, this list will shuffle seasonally.

Alerts were one of Warframe's earliest features, and the fact that they've been so casually replaced highlights just how daring Digital Extremes have been. Today's Warframe now bears only a passing resemblance to the first public test versions released years ago, and there's plenty more to come. DE say there's a comprehensive rework to the core combat on the way, removing the divide between ranged and melee. If all works out, players will be able to integrate both into combos, Devil May Cry-style. Plus, of course, there's that whole space combat expansion on the way. 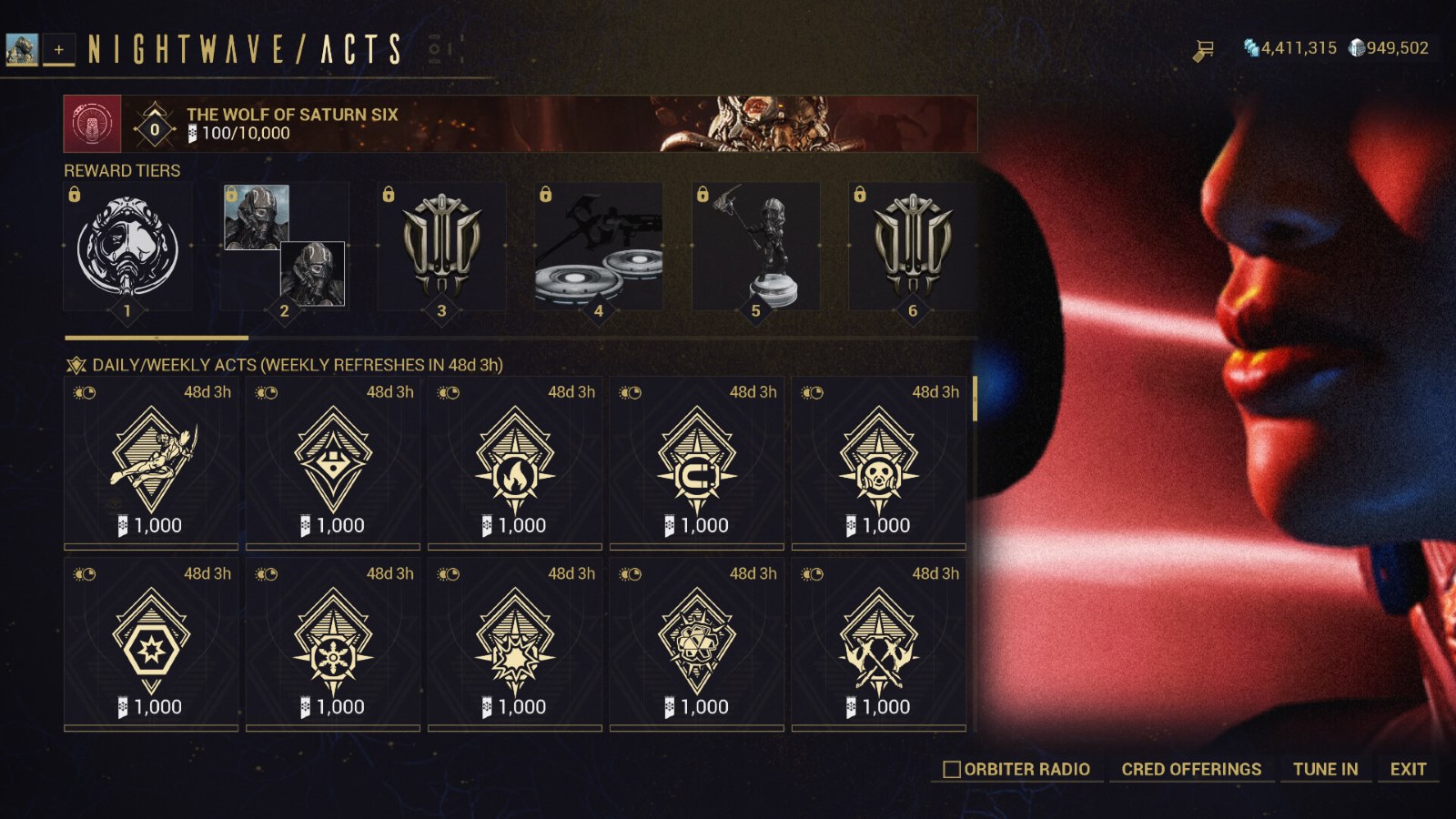 While I've yet to get a feel for how fast you can earn rewards, I like what I've seen so far. My only gripe with this update is that Nora jokes that she doesn't take callers, which is missing out on a huge opportunity for both world-building and some good jokes. When all else fails, just crib from Vampire: Bloodlines's The Deb Of Night, paired brilliantly with Batman cartoon footage here.

The Nightwave update is live now in Warframe, and the first season - The Wolf Of Saturn Six - has begun. The game is free-to-play and available direct from Digital Extremes or on Steam here.