Huzzah for rhyming headlines! Yesterday, we reported on a series of increasingly overt teasers coming from Arkane Studios, not-so-subtly hinting that they're not quite done with System Shock-ish immersive sim Prey.

Today, they dropped almost all pretense. It's March 15th, the day that Prey's story begins on (at least according to the robo-voiced alarm clock that awakens protagonist Morgan Yu from rest). Celebrating the pseudo-anniversary, the studio got together to tweet out a mysteriously redacted team photo, only to release the uncut and probably release-date-containing one later in the day.

The uncut tweet is full of juicy details, as well as some silly things that were just redacted for laughs. To save you some squinting, here's the full resolution version of the image, just click to embiggen and feast your eyes on the fruits of their slightly-too-grainy camera. 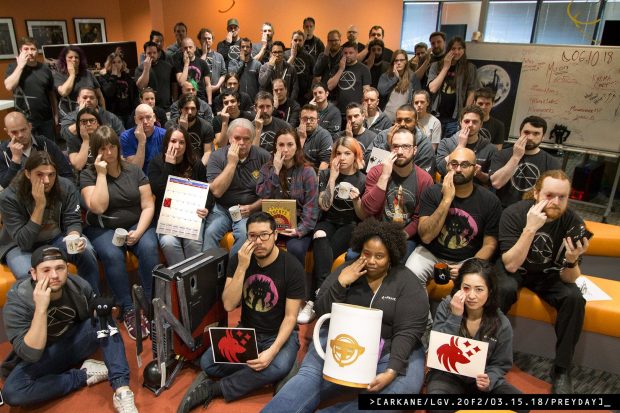 The whiteboard is really what gives it all away. Among the more notable scribblings are the sub-genre's ever-present 0451 passcode (although this one is crossed out), multiple references to the moon (the most likely location of any upcoming Prey expansion), as well as references to Kosma Corp, a rival operation to Prey's onmipresent and morally bankrupt TranStar. To reference the excellent Alien: Isolation, they're Seegson to your Weyland-Yutani.

Most importantly is the date, though. Assuming American date format, we're looking forward to something either being fully unveiled or (more likely) launched on June 10th this year. It sounds like a reasonable enough launch date, and Arkane have established a solid track record releasing expansions that improve on already great games. Fingers crossed, eh?

Most questionable of all the doodles on the whiteboard is 'Moonshark!!?'. A codename, or some sort of weird new enemy to deal with, we don't know, but assuming that it's some kind of living creature, moonsharks are always cool and we hope that we can high-five or ride any such spaceborne fish rather than deal with it in traditional video game fashion.

Lastly, I'm just going to assume/hope that the red eyes are all photoshopped in, because otherwise you could have a member of Arkane's staff behind you and not even know it. Did you forget to take that coffee mug out to wash earlier, or do you really have two on your desk?