How many times have you played as The Hero of the Revolution? Where you get to lead the charge against an evil government, backed by a rag-tag rebel group, as a rough, gruff outsider. You’re the one who drives the action, at the head of every important rebel action - it’s your guts and your guns that will win glory for the revolution. You’re the face of change, in that you literally show up on all the WANTED posters. The rebels cheer for you when you walk close. Everyone assures you history will remember your name.

Pyre’s not that game. You’re just a hero of the revolution, no capital letters, and certainly no glory. No one will remember your face, much less your name.

Nearly everyone you meet in Pyre has a similar story: they did something deemed unacceptable by polite society, and were exiled to the Downside. Exiles are flushed down a river to beautiful, brutal land that serves as combination penal colony and death world. The Downside doesn’t quite exist on the same plane as the rest of the world; there’s only one way back out, and it involves a magical upwards-flowing pool of water that opens up only when the stars align. To earn the right to escape, exiles must join one of nine triumvirates, or groups of fellow exiles, and fight their way to the exit through a set of ritualized ball games called the Rites.

The polite society, called the Commonwealth, was originally founded as a better alternative to the empire it replaced. Eight hundred years later, the Commonwealth is now an oppressive, authoritarian nation. Ever since its founding, it has been embroiled in a ceaseless war with its neighbour, the Highwing Remnants. The Commonwealth’s rulers banned literacy, in an attempt to keep their grip on power, two hundred years ago. And the practice of exile, intended to be used for the worst criminals, is now the de facto form of punishment. Your crime was being able to read. The crimes of the exiles you meet include conscientious objection, refusing to execute children, and simply not fitting into society.

Early on in the game, as you near the final Rite that will determine who goes free, you are told about a revolutionary plot. Created by your teammate Volfred Sandalwood, this Plan (always capitalized in game) is a scheme to topple the Commonwealth. The core of the game still revolves around trying to secure freedom for your companions, with an added twist in that you’re asked to consider how they might contribute to the struggle on the other side.

But, while the game makes a big deal of the Plan’s slow progress, the revolution is inevitable. No matter what you do, the government will be toppled, the difference only in how violent the revolution becomes. No matter which of your Nightwings you send home, they will help in their own way. And if none of them make it home, well, the Commonwealth falls regardless, and the Sahrian Union will take its place. 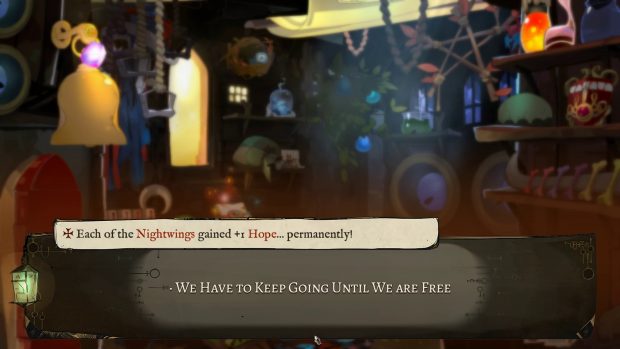 As Reader of the Nightwings, your contribution consists of choosing who gets to go home, and trying to make sure that they’ll make it there by winning in the Rites. But, ultimately, you’ll never directly participate in this revolution. You can’t even participate in the Rites, since the game indicates the Reader is crippled somehow. Your character never gets a name, only a title, and their face is never seen. The game’s epilogue states that all accounts of the Reader, in the future, are fragmentary. No one’s even sure if you definitely had a hand in creating this new nation.

So who’s The Hero of the Revolution in Pyre? There are two candidates, Volfred Sandalwood and Hedwyn the Deserter. Hedwyn most closely fits the mould: he’s charismatic, idealistic, and joins the revolution with little hesitation. Wherever he ends up, he forms the charismatic core of the rebellion and if he returns home he becomes a popular leader of the new government. He even manages to have a romantic subplot, seeking freedom so he can be reunited with his lover. Initially, he’s the one who gets the group to accept you, saving your life. He settles disputes and it’s clear that of the original Nightwing trio, he calls the shots. 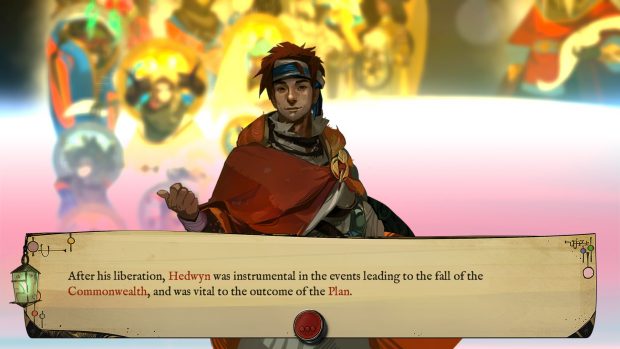 Volfred Sandalwood is the mastermind of the entire revolution, a former professor whose old colleagues and students form the core of his revolutionary network. He’s the one who did all the legwork, finding new recruits, organizing communication between those in the Commonwealth and the Downside, and ultimately was the one who gave Hedwyn the idea to dig up an old wagon, grab two friends, put on some robes, and start playing fantasy basketball. Volfred is the driving organizing force behind the game after the first cycle of the Rites. The game calls him the leader of the Nightwings, and though he’ll defer to you when it comes to conducting the Rites, he is always there to steer you and the Nightwings to where he needs you to be. 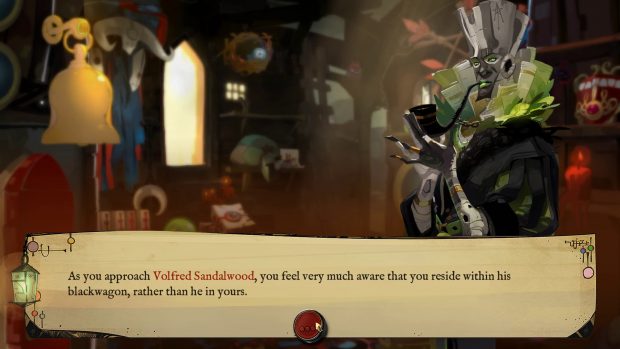 None of this is a knock on Pyre’s story. In fact, it’s to its benefit, and manages to make the Plan one of the better representations of revolution. Instead of depicting the toppling of an old government as the work of a single determined individual, Pyre emphasizes how much of the groundwork is laid out in slow, incremental, yet vital community work. Nor is it a coldly logical take on the issue. Pyre champions a gentler, kinder take on revolution: Volfred might have laid out a network of contacts, but it’s your bonds of friendship that carry you through. And Hedwyn might be the poster boy of the revolution, but it’s his relationship with a Harp, sworn enemies of the Commonwealth, that symbolizes what’s at stake. The pair represent a brighter, kinder future where people aren’t persecuted for stepping out of line.

Your job in this operation is to hold everyone together. In Pyre’s fictional language, “Reader” is “liguratus”, close to the Latin “ligare”, meaning to bind or to unite. While everyone has their own motivations for seeking freedom, your contribution is to organise them and remind everyone why you carry on. You form the emotional core of the group, helping each member of your team grow and realise that freedom means more than merely escaping the Downside. In effect, the game recognises that there is more to organizing and executing a revolutionary plan than cold-hearted efficiency. Compassion, care, and companionship take center stage in Pyre’s revolution, whether it is used in service of inspiring others to join the cause or simply showing a little kindness to those who deserve it the most. 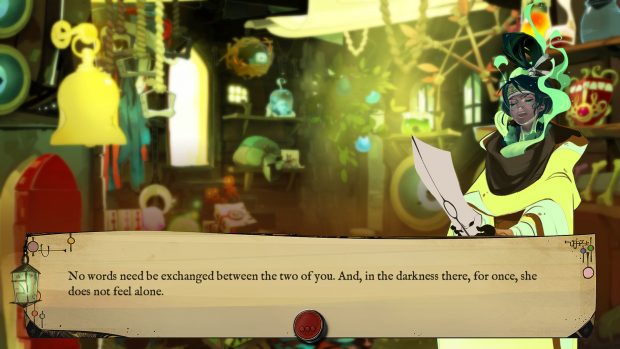 Pyre’s focus on compassion and kinship as core values of social movements are welcome in the current political climate in Europe and North America. Protesters face mounting persecution from governments keen on cracking down. In the United States alone, legislators are introducing bills aimed at protecting those who kill protestors by hitting them with cars. As fantastic and mythical as Pyre’s world is, its issues and themes regarding broad social change are as relevant as ever. It is a rare game that is willing to sideline the player’s character in favour of showing that change requires coordination and community. It is rarer still to find popular interpretations of social change that focus on collective action, rather than individual action, as its main driver. Even as the urgency of the Plan mounts, your revolutionaries decide to rely on their trust in one another: they trust that you, as Reader, will make the right choice, and on your part, you trust that those exiles you send home will do their best to further your goals. Pyre’s gentle revolution is one that understands that a monument that honours the mastermind of the revolution ought to honour his entire organization; it knows that the values of liberty, mercy and kinship can find material expression in something as simple as a tranquil, sunlit library. 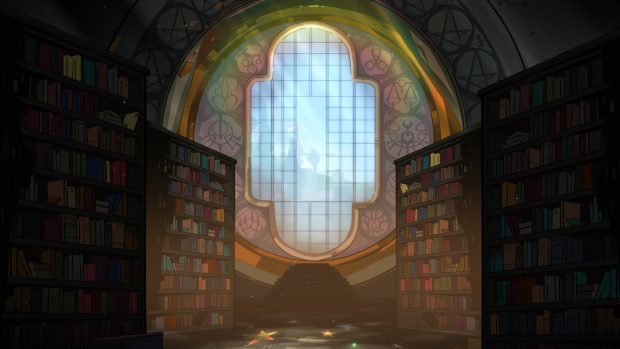 It’s a respectful and ultimately optimistic stance on revolution. Inch by inch, the denizens of Pyre’s world build a better future for themselves, whether they are stuck in the Downside or not. Throughout the game, there’s no guarantee that this plan will succeed, and the progress of Volfred’s Plan is given to you as a percentage chance that will never quite hit 100%. The last time there was a revolt, the government banned books and literacy, leading to what you see in the opening menu of the game: a pile of burning books, your Reader kneeling among them, and a window showing the downward-flowing river that provides your one-way trip to the Downside. The Voice, Pyre’s bombastic narrator and a ruler in the Commonwealth, shows up to lambast you frequently as your revolutionary leanings become more obvious. But you never stop trying - indeed, giving up is never an option - even as the stars go out, and it becomes clear that not all of you can return. Not even the end of an age is enough to stop the quiet determination of Pyre’s revolutionaries.