Want to learn how to master Bangalore and her abilities in Apex Legends? Bangalore is Apex Legends’ resident military specialist, and she’ll never give you a second to forget it. You can learn all about her abilities below, along with her origin and tonnes of useful, practical, and up-to-date tips and tricks to get the most out of this oppressive attacking focused Legend.

Bangalore has access to three abilities: Double Time (Passive), Smoke Launcher (Tactical), and Rolling Thunder (Ultimate). All three make her a slippery customer who is hard to pin down and confirm a kill on. She is also an Offensive Legend alongside Octane, Wraith, Mirage, Revenant, Horizon and Fuse.

Each of Bangalore's abilities will be explained and discussed below. She has remained a consistent pick since the game launched, never too far away from the best Apex Legends characters. Her evasiveness is one of her defining traits, excelling in denying information and being able to create space between her and her opponents. However, her kit is versatile enough to allow you to spring surprise attacks as well.

Let's start by looking at the general strengths and weaknesses of Bangalore's kit. We'll go over the ability-specific tips and tricks below, but first here are some general tips and tidbits of advice to take into the Apex Games with Bangalore: 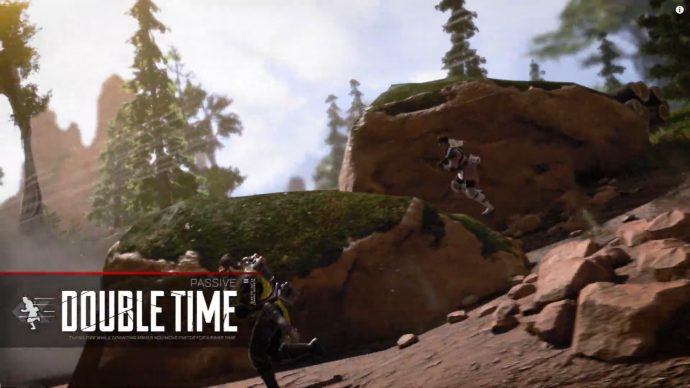 Description: Taking Fire while sprinting makes you move faster for a brief time.

Bangalore's Passive is one of the most reliably useful Passive abilities of any character. A flat 30% speed boost when you are hit or when shots are fired nearby is tremendously powerful both for escaping danger and repositioning for a flank attack. There's not too much to talk about with this ability: it's just a really nice little thing to have on your side when danger comes calling. 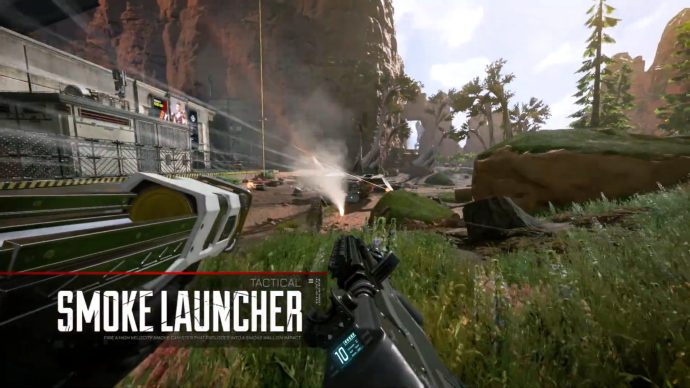 Description: Fire a high-velocity smoke canister that explodes into a smoke wall on impact. Cooldown: 33 seconds.

The first thing to realise with Bangalore's Tactical ability is that you have two charges with your Smoke Launcher - you can see next to your Tactical ability icon that there are two bars which indicate your current number of charges.

Each of these charges are expended and refilled independently, and with each use, you fire a grenade that explodes on impact into a large screen of smoke lasting around 20 seconds, which you cannot see through unless you are Bloodhound or you have a Digital Threat sight. 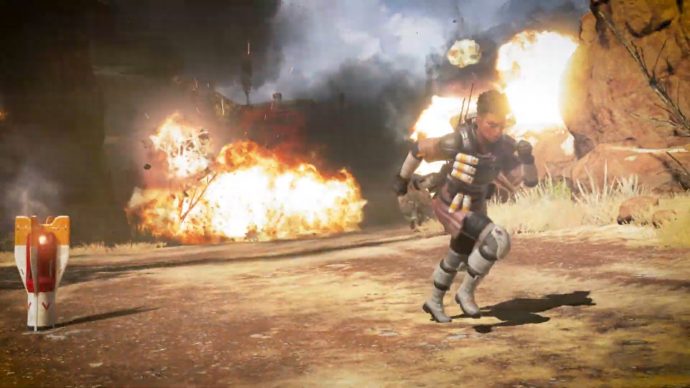 Description: Call in an artillery strike that slowly creeps across the landscape. Cooldown: 3 minutes.

Bangalore's Ultimate ability allows her to throw a canister a considerable distance away from her. Where the canister lands, rockets will rain down in a zig-zag pattern across a large area, spreading out in the direction thrown. After 4 seconds, each rocket that has buried itself into the landscape will explode, stunning and dealing 40 damage to any enemy hit (or yourself).

In a game full to the brim with complex backstories and motivations behind its characters, Bangalore is one of the game's most straightforward personas. What you see is largely what you get.

Anita Williams was born into a military family, and followed that path with her and her four brothers all serving in the IMC. She excelled as a model soldier her whole life, coming top of her class at military school. To demonstrate her mastery, she is the only cadet who can take apart a Peacekeeper, equip it with a precision choke hop-up and put it back together in under twenty seconds – blindfolded. When it comes to combat and military hardware, Bangalore is as good as it gets.

However, her story isn't without tragedy. While onboard the the ship IMS Hestia with her brother Jackson, they were attacked by unknown assailants. A bomb nearly killed Bangalore, but Jackson gave his life to save hers, his body sucked into space for his sacrifice. She now fights in the Apex Games in hopes of earning enough money to return home to her remaining family.

That's everything you need to know to start using Bangalore in Apex Legends. While her brash personality may not be for everyone, she is a versatile and consistent Legend. Both a great elusive runner and lethal initiator, she is also defined by her flexibility. If you're wondering how best to kit her out, be sure to take a look at our best Apex Legends loadouts guide.