If you click on a link and make a purchase we may receive a small commission. Read our editorial policy.
Developer: Bethesda Game Studios
Publisher: Bethesda Softworks

“People have returned to Appalachia in droves,” proclaim the patch notes for Fallout 76’s Wastelanders expansion, in what is both a reasonable summary of the troubled RPG’s third free expansion and, I suspect, a spirited attempt at self-fulfilling prophecy. Of all the gripes players (including this guy) had with baseline F76, by far the most prevalent was that it felt abandoned at launch. With human NPCs present only as voice recordings left by the long-dead, and a maximum player population of 24 per server, the game worked well as a mood piece about post-apocalyptic emptiness, but not so much as a fun time.

But in fairness to Bethesda, they immediately began steering Fallout 76 back towards warmer, more populated waters. Now, after a year and a half of work, the proof-filled pudding is served. And since it's landed on steam too, widening its reach considerably, Bethesda are no doubt hoping a proverbial drove of players who gave it a miss 17 months ago will be coming back for a taste. But will it be to their liking?

I’ve spent two days playing Wastelanders with a brand new character, as if I were playing the game for the first time. And while I've not fallen in love with it by any means, it's grown on me. The mood of the game, for want of a better word, is transformed: what was once hollow now feels fleshed out, and what was lifeless now feels at least intermittently busy. I've still got a lot of issues with Fallout 76, but they're starting to feel fixable, or at least easier to overlook.

The addition of human NPCs is the central pillar of Wastelanders, and the change announces itself right off the bat. There are two raggedy wanderers lurking around right as you leave Vault 76, and they soon direct you to a pub called the Wayward, which has sprung up to cater to all the newcomers to the area. Needless to say, in the time-honoured tradition of all RPGs ever, the pub is being troubled by bandits.


Wastelanders is set one year after the events of Fallout 76, and the continuity situation is... complex, but well thought out. Basically, the Wastelanders main quest, revolving around the search for a legendary treasure, is woven in with that of the base game. You're not forced to play through the whole of the latter, but you do have to get a certain way through to make it logically possible for the rest of the Wastelanders plot to take place. I thought it was pretty cleverly done, and if you completed broad swathes of the main quest prior to playing through Wastelanders, it unlocks new dialogue options due if you've seen impressive things. Like this big angry bat, for example:
The Wastelanders story itself comes in two slices. The first, smaller slice is accessible straight away, and revolves around the Wayward, and the fate of a treasure hunter called Crane. These missions stretch out to a good few hours of play time, and are enough to get you to level six or seven without stopping to smell the mutants. But the real bulk of Wastelanders' story unlocks after you reach level 20, at which point it intersects with the original main quest, and you’re introduced to two main human factions: the Raiders and the Settlers. The former have made their home in the crashed space station up in the north of the map, making one of Fallout 76's best bits of set dressing more interesting in the process, while the latter have made a nice little town called Foundation. 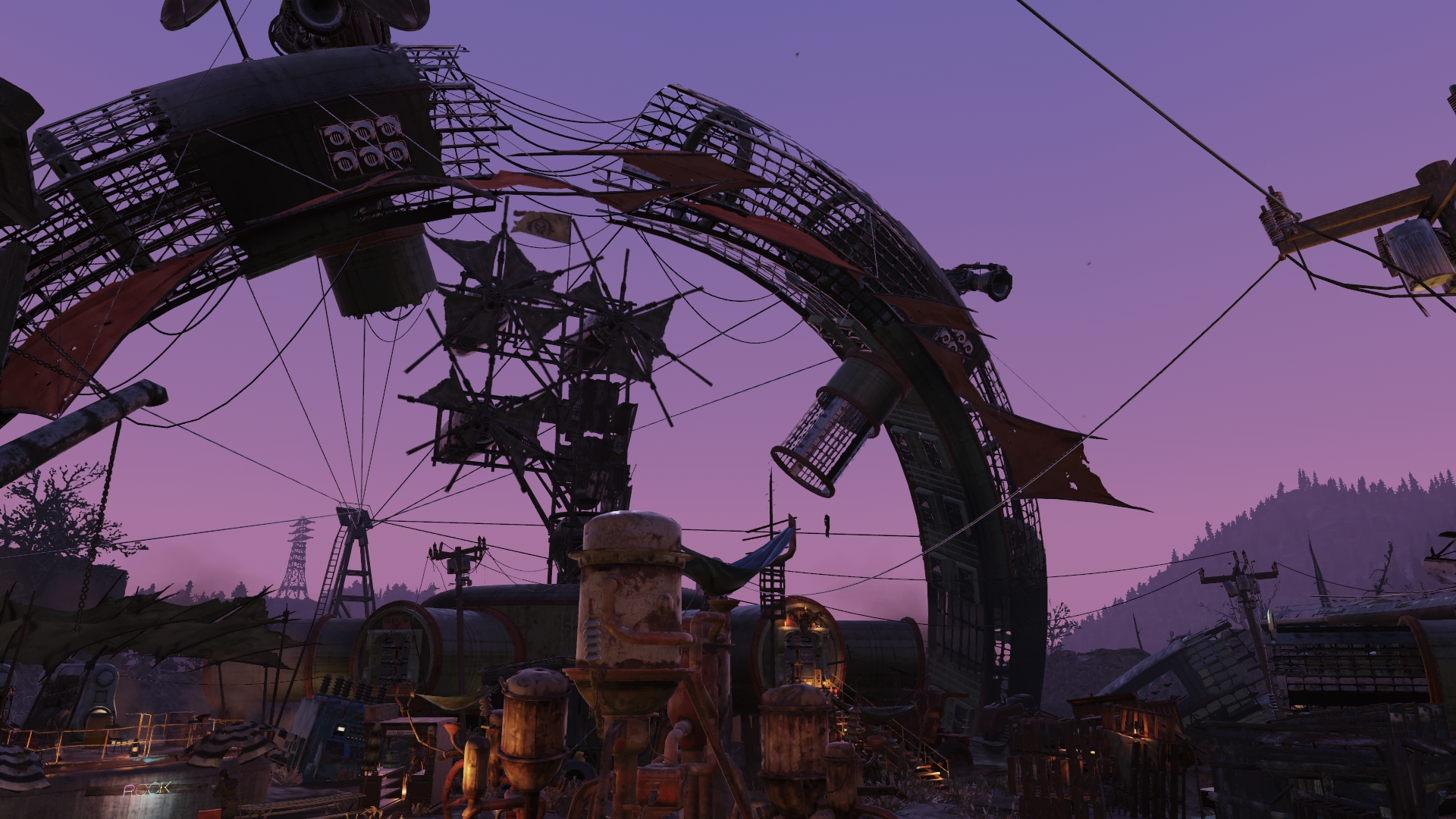 They’re a bit like the Imperials and the Stormcloaks from Skyrim, in that you can do quests for either faction, but eventually you have to choose between them. And the chance to loiter around their settlements is a real breath of fresh air in an otherwise lonely world. There's people chatting, crappy post-nuclear bars being run, and even people getting together to play the game's many musical instruments.

The decision to split the Wastelanders content into two sections like this like was a shrewd one. For tentative new players, it demonstrates that Fallout 76 has turned over a new leaf straight away, with all the subtlety of a boombox held up outside a bedroom window. And then, just when you're starting to run out of Wastelanders-specific things to do, it throws the faction stuff at you. Also, if I was betting man, I’d say the later chunk of Wastlanders quests was positioned around level 20, because that’s about the point where most people gave up on Fallout 76 and let their accounts go fallow.


For the most part, story missions happen in instances separated from the main world by loading screens. I was a bit dubious about this at first, largely since it prevented my companion Matthew from entering plot areas with me (and slaughtering every attacker like a dour mechanised butler), but I soon saw the appeal. Fallout 76's original robot-and-terminal-dispensed plot allowed multiple people to do the same things in the same areas, without interfering with each others’ games. If the quests involved things like, to take an example from Wastelanders, a decision over whether to kill or spare a human NPC, it would have gotten awkward quickly.

Wastelanders' instances sidestep this issue by essentially loading up a small Fallout level for you to play every time you’re doing plot stuff. In these little pocket dimensions, you can choose how to tackle problems, for example, a git trying to rob a bar at gunpoint, and make a whole load more choices than Fallout 76 previously allowed. There's even proper, branching dialogue! It includes moments where you have different options available based on your stats! It is, in short, roleplaying. And yes, you'd rather expect that in a roleplaying game... but hey, better late than never, right? 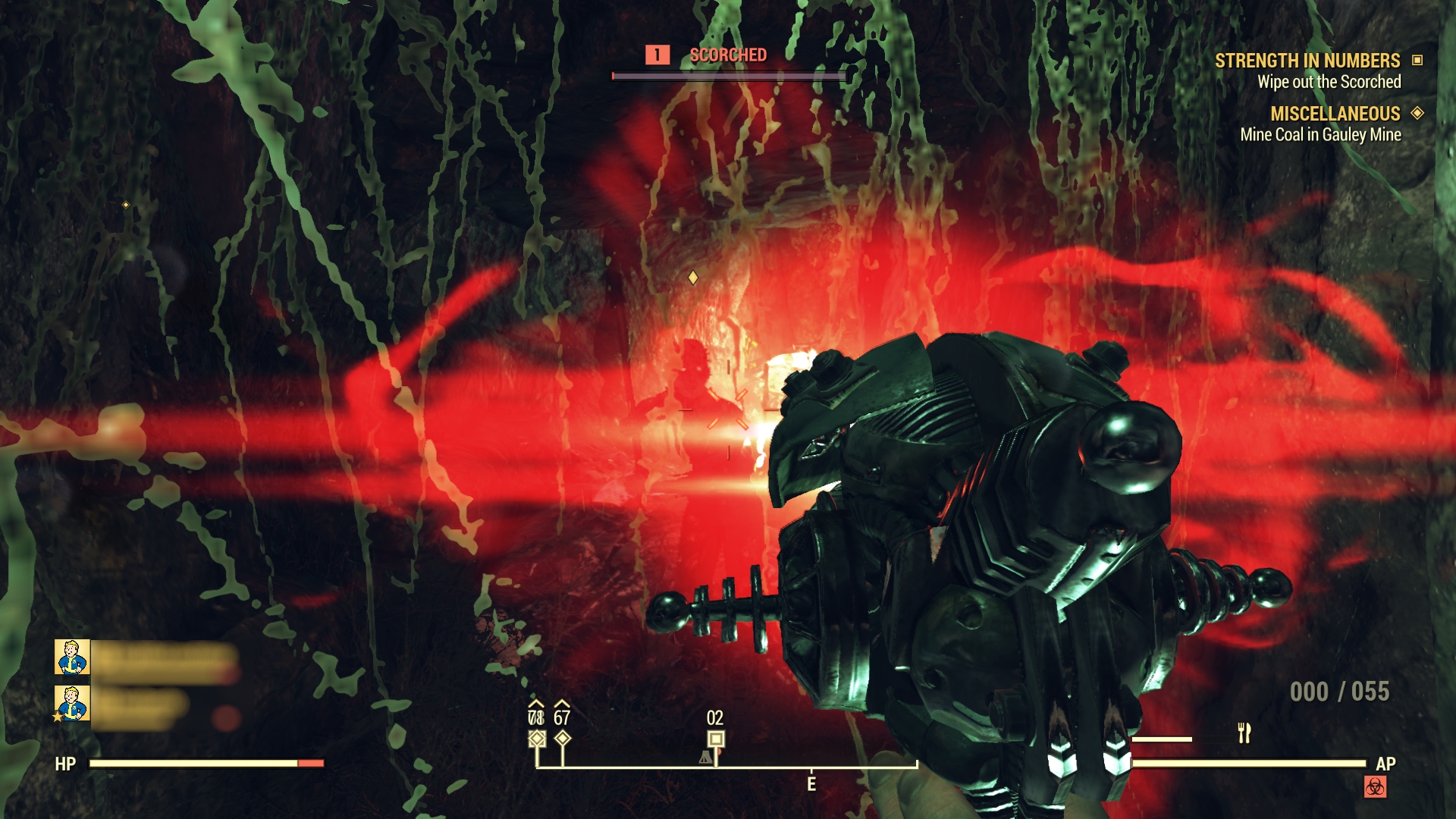 Can you help me out, stranger?
The quest missions are, on the whole, a lot better in Wastelanders. As well as giving you some flexibility in approach, they feel more creative and adventurous than those of Fallout 76, which mostly involved traipsing around abandoned sawmills and hospitals, collecting bleak audio diaries. Also, because there’s actual living people telling you to do stuff now, with emotional motivation and everything, you feel less resentful about carrying the missions out.

I can pinpoint the exact moment where I warmed to Wastelanders, and it's pictured above. I was down a mine filled with Scorched baddies, and after rescuing a man with a broken leg, I was directed to the thing I was seeking: the head of an assaultron death robot, which spoke like a world-weary drag queen, and instructed me to carry it around, using its eye laser to blast my way through a horde of nasties to get out. It was actually fun.

As I've already suggested, you can get to a surprisingly high XP level with limited exposure to the original Fallout 76 storyline. But where you do have to dip into it, it's been freshened up in places, with new NPCs along the way, and a whole bunch of new humans to encounter on the main world map. Some of these are peaceful homesteaders, just trying to make their way in the world. Others are classic pipe-wielding maniacs, and serve as a palate cleanser in between jobbing masses of ghouls and the like. Also, there are mothman cultists.

Another pleasant note is the introduction of human "allies" to recruit. I was hoping they'd be like the companions in Skyrim, carrying my burdens and the like (because good lord, there's still a lot of fucking ball peen hammers to lug around in Fallout 76). Alas, they stay put in your camp, but as well as helping to defend it, they occasionally offer story quests, and little bits of conversation. One man, who looks like someone let half the air out of an early-90s Schwarzenegger, set up a bar in my camp and fed me beer in between excursions.

There’s more in Wastelanders besides just new humans - there's a new gauss minigun to play with, for example, and a gold bullion currency which unlocks at the end of the Wastelanders story, in order to liven up the endgame loot grind. There are also new enemies, such as the deeply unpleasant Wendigo Colossus, and the Floaters, who appropriately enough are little shits that bob around and prove difficult to get rid of. 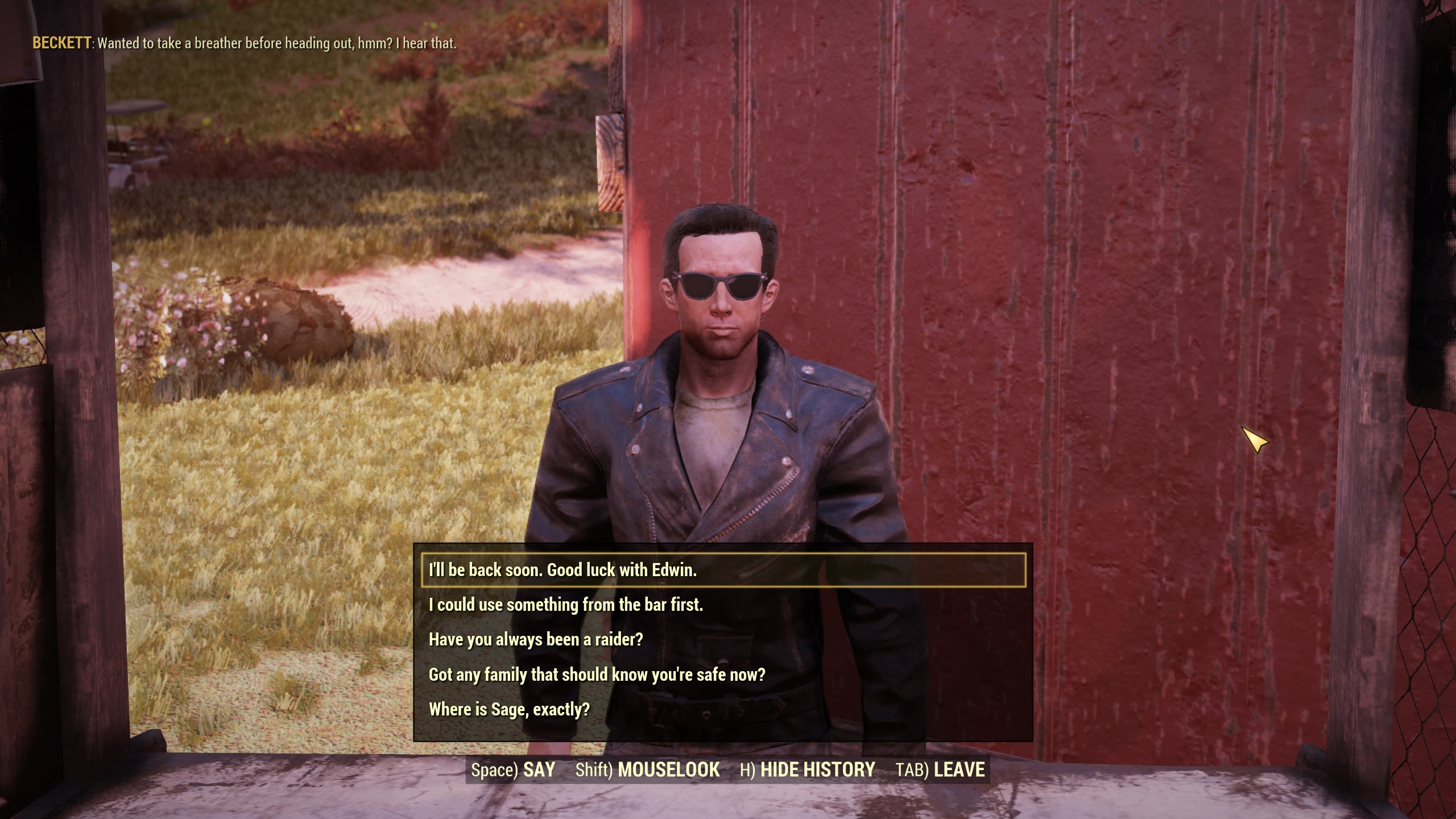 Wastelanders is not, however, a total Road To Damascus moment for Bethesda's big weird experiment. There is still too much time spent in menus. There are still so, so, so many key bindings to keep track of. I still don't truly understand the baffling perk card system. And the gunfeel is still distinctly off. In baseline Fallout 76, I observed that gunfire felt like throwing packing peanuts at Jason Momoa. Now it feels like trying to fend off an angry builder by whipping them with toilet paper. Is that better? I'm not sure. But it's still not great.

And neither, if I'm being brutally honest, is Fallout 76. I really respect how much it's improved, and I've tried my hardest to enjoy all that Wastelanders has to offer. But at the end of the day, Bethesda have worked their arses off for eighteen months in order to make a game that is alright. For devotees of the Fallout series, it’s probably upgraded to "pretty decent". With another expansion or two in this vein, I’d tentatively say Fallout 76 could be... good. And for the players who've stuck with it since day one, Wastelanders must seem like an utter triumph. I feel especially pleased for the cannibals, bless their rotten hearts.

There’s a pleasingly post-apocalyptic metanarrative to all this, you see. After being bombed to oblivion, Fallout 76 is finally crawling out of the ashes, and offering hope to the hardboiled souls who’ve stuck it out through the long, depressing winter. And what left me unable to be too hard on it, was this: 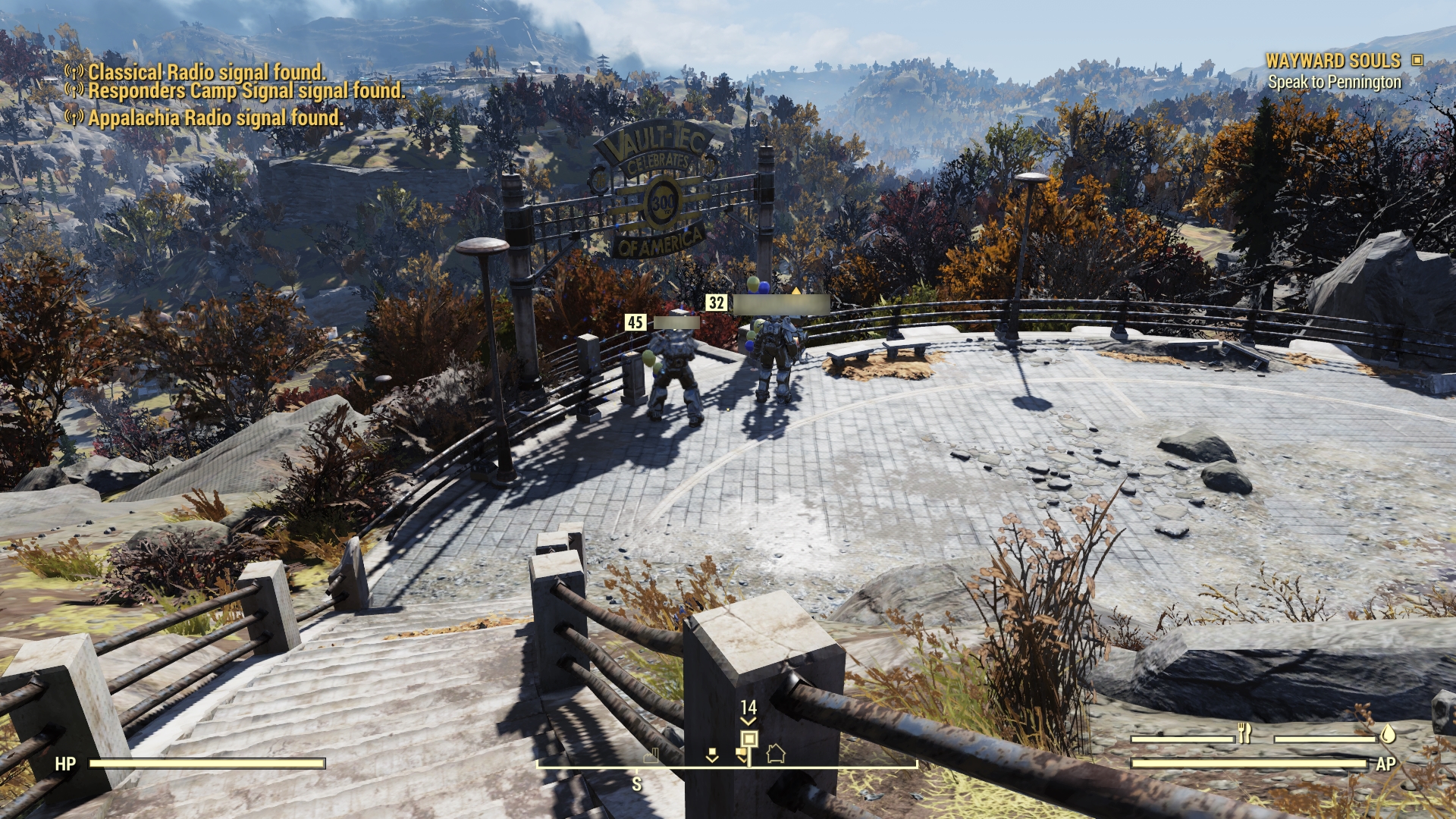 As you can see, it wasn’t just human NPCs my new character met, when first exiting Vault 76. Standing beneath clusters of balloons were two burly figures in power armour, with decently high XP levels, and I idly wondered if I was due a beasting. But they just waved at me, before dropping a paper bag full of medicine, ammo and food. Finally, all that chat about rebuilding civilisation that rang so hollow in November 2018, felt relevant again. Somehow, the arrival of pretend humans in Appalachia has made it easier to appreciate the real humans that live there.

Fallout 76 is being rebuilt, and Rome wasn’t built in a day, after all. But then, Rome wasn’t hastily reconstructed from an out-of-season caravan park in Skegness either, which is kind of what it felt like Wastelanders had to do with the base game. Ultimately, it would have been easier just to make a normal Fallout game in the first place, rather than reverse engineer one from a busted MMO. But that’s the path that’s been taken, and so here we are. I don’t know if droves follow it to Appalachia. But for hardy and forgiving treasure seekers, while there might not be much gold in them thar hills, there’s at least company now.