If you click on a link and make a purchase we may receive a small commission. Read our editorial policy.
Every other Monday, Dominic gives you a reason to dust off one of your old games and dive into its mods with Modder Superior. This time it's Fallout: New California, a massive mod for Fallout: New Vegas created by Radian-Helix Media.

Fallout 76 might have turned out a faintly radioactive dud, but Fallout fans after a fresh serving of post-apocalyptic roleplaying and big choices could do a lot worse than Fallout: New California. It's practically a whole new Fallout game, and free to boot. Here's how you can get it, Wot I Thunk of it, and some tips on extra mods to make this return trip to the desert a memorable one.

Setting up Fallout: New California is as easy as it gets, thanks to a new version released recently with a smart installer. All you need is Fallout: New Vegas installed (DLC optional but recommended), and to run the New California installer from Mod DB. Launch the game as normal and you'll be greeted by a new title screen, and the New Game option will give you the choice to start either the New California story or a regular New Vegas campaign. New California also includes a Fallout 2-styled interface revision, making dialogue and inventory screens nicer to look at.

Starting as a new hero in Vault 18, Fallout: New California almost feels like a Choose Your Own Adventure at first. Before picking out an appearance or a name, you're given a massive binary choice. During your last big Vault Ball game of the season, you're being charged by the other team's heavy - tackle or dodge? Chosen from a dialogue box, this choice wildly alters the next few hours of play, determining whether your initial quests, skills and perks will be combat or intellectual. Characters regard you differently, dialogue changes and more - NC does big choices.

Within either of these branches, smaller sub-branches exist. My affable meathead, Slab Bulkhead, got swept up with his sports coach's talk of patriotism and restoring America to glory and ended up semi-reluctantly working alongside the fascistic Enclave. Even though all roads lead to an escape from Vault 18 early on, who you'll be, what abilities you'll have and what companions are willing to follow you is down to player choice. New California's story isn't a long one, and some key events happen each time, but which of the many sides you stand with (if any) is your call. 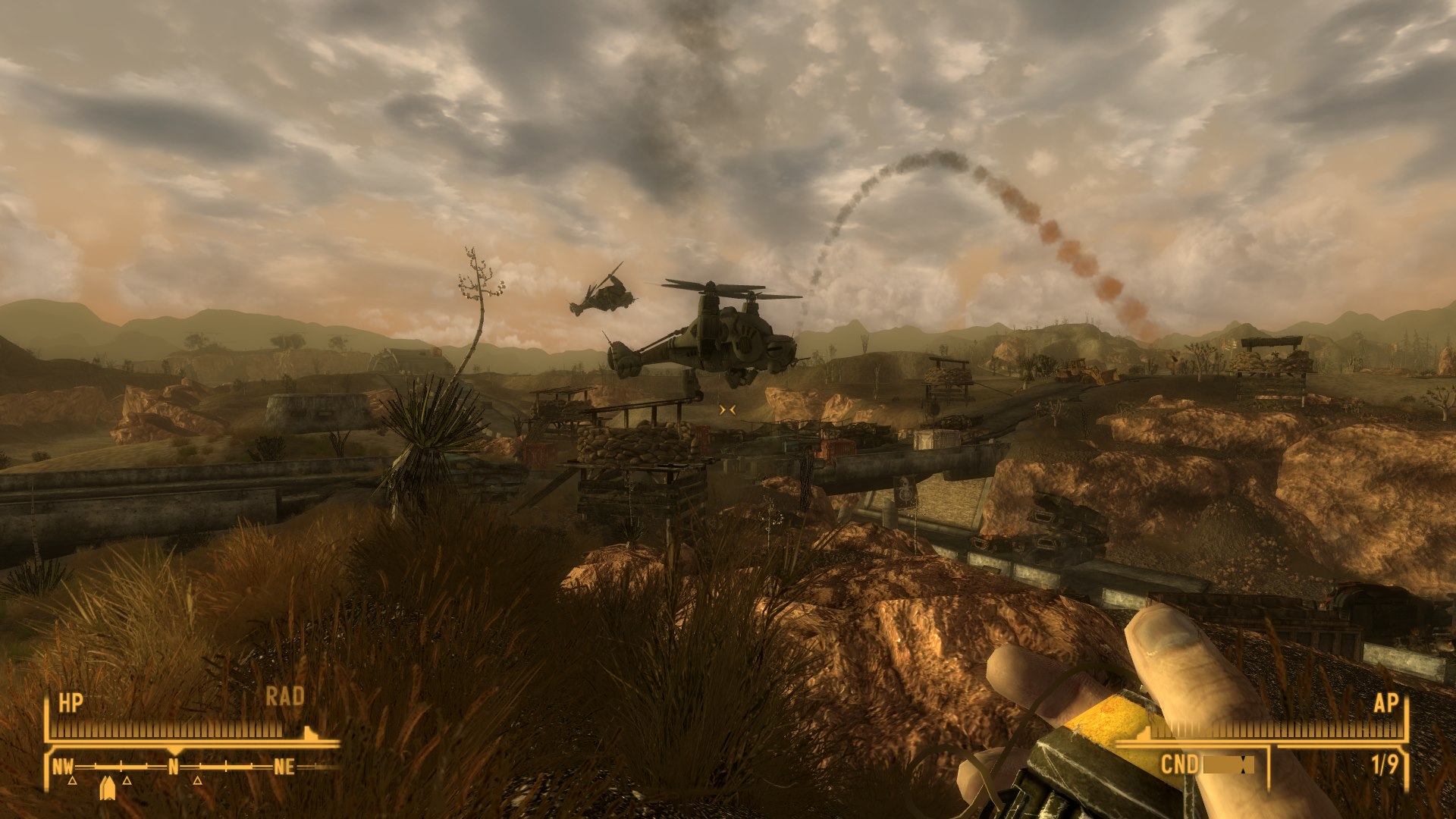 New California is a war story, and you can just hear New Vegas groan and creak under its bigger battles. Dozens of troops on each side pummel each other, while Vertibirds swoop overhead and artillery rains down. Call Of Duty-esque action isn't the best fit for New Vegas's wobbly combat (though improved by Project Nevada -- more on that later), but it's a fun excuse to bust out rockets to clear enemy swarms. If you chose to go the more academic route, stacking your points into Science will net you some sturdy robot pals to make up for your lack of beefiness, but there will always be some fighting.

Things slow down and return to something more akin to regular New Vegas after a point, and that's where the cracks begin to show. New California's map is enormous, but it's mostly empty desert punctuated by random roaming packs of raiders, NCR troopers and the occasional giant scorpion. Side-quests and companion story arcs are pretty threadbare, too, although more are in production for later releases. New California is at its strongest when it's doing its own thing, telling its condensed Fallout story heavy on set-pieces that push the game to its limits. 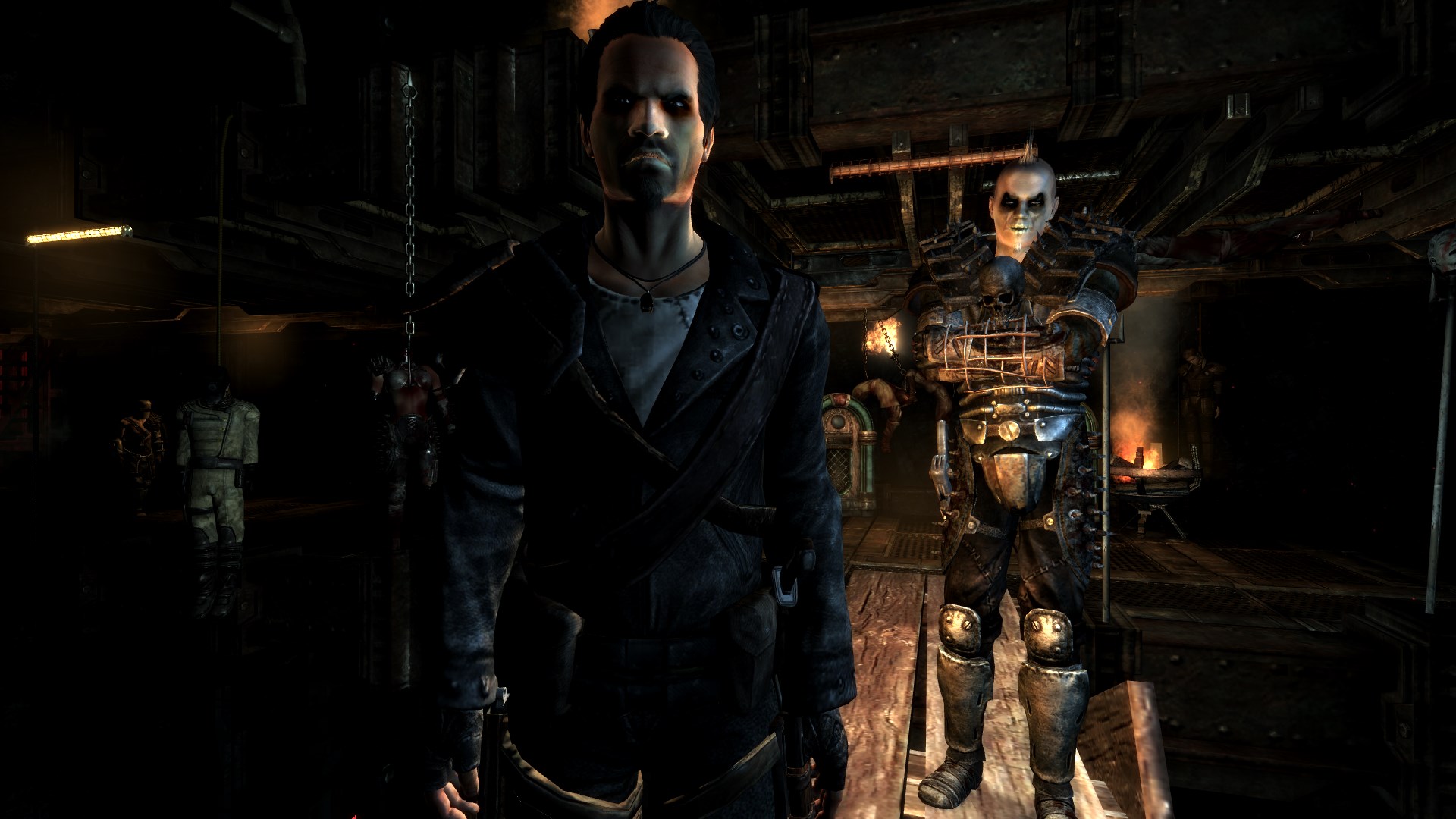 Some clumsy swearing aside, the mod's fully voiced script mostly matches New Vegas in tone. There's a large cast, and aside from some characters whose voices don't quite fit and a few lines that are obviously from a second take, it feels like a professional production. Similarly, when you're not roaming the desert, the environment design is impressive. Vault 18 is a large, complex space built around a central hub that may push older PCs too hard, and the raider's multi-levelled fortress is just plain massive. Aside from the occasional bit of glitchy geometry (save regularly), these are good places to explore.

All in all, it's more proper, story-driven Fallout filled with significant character choices. Some parts might be a bit thinner or rougher than the whole, but this is a well-portioned (10 hours, give or take), highly replayable story -- a must for Fallout fans not feeling the call of West Virginia. All of these opinions are based on a gun-heavy vanilla playthrough of the mod, but Radian-Helix Media recommend some secondary mods to help flesh out the experience, although setting it all up will take a bit more legwork. While their full list is here, my recommended picks are: 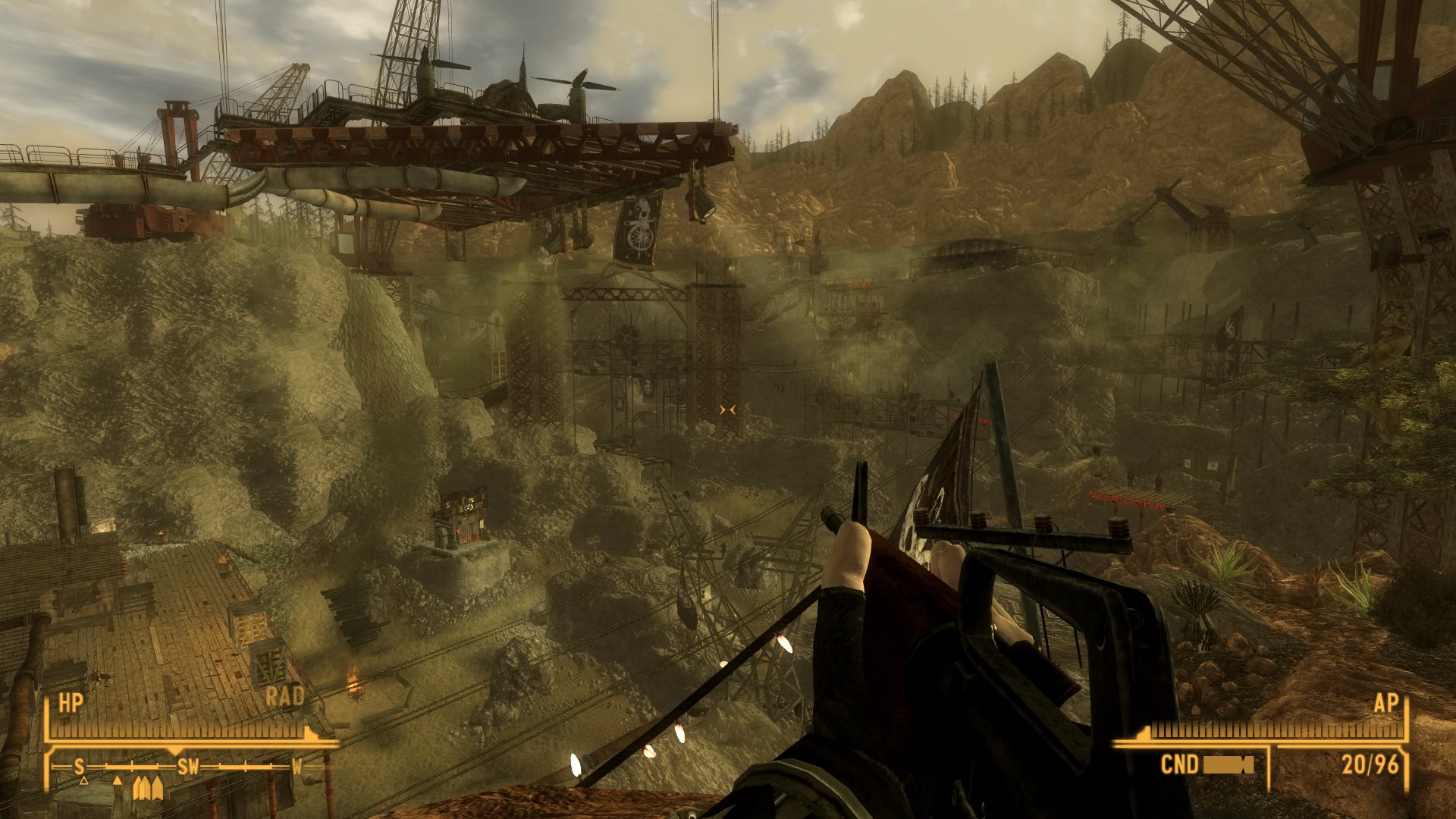 Vortex Mod Manager by Nexus Mods - setting up multiple Fallout (or Elder Scrolls) mods can be a pain. This takes most of the sting out of the process. Follow its instructions and it should make the rest of this process easy. It even catches download links from Nexus sites, handling downloading and unpacking for you.

New Vegas Script Extender by the NVSE Team - A prerequisite for many more advanced Fallout mods. Does nothing by itself, but adds new scripting features for modders. Once installed, run New Vegas via its 'NVSE_loader.exe' file instead of launching via Steam.

Stability Enhancer and Stutter Remover For Windows 10 by Team Moki - A plugin for the Script Extender. While your mileage may vary (it is a positively arcane bundle of tweaks), it makes the game run considerably smoother for me, with more responsive mouse controls.

Solid Project by TommInfinite and friends - A bundle of new animations and control tweaks to make New Vegas's world feel a bit more tactile and weighty, adding rifle-butt melee, sprinting and other things you expect from a modern shooter, but weren't found normally in the game. Requires NVSE, and the Vortex Mod Manager should handle the installation for you.

Project Nevada by PN Team - A complete overhaul to New Vegas's combat and RPG systems, adding features like bullet time as an alternative to using VATS targeting, using explosives to pick locks and a complex cybernetics system. Many quest mods, including New California, are designed with Project Nevada's changes in mind. NVSE required, and Vortex makes setup a cakewalk. 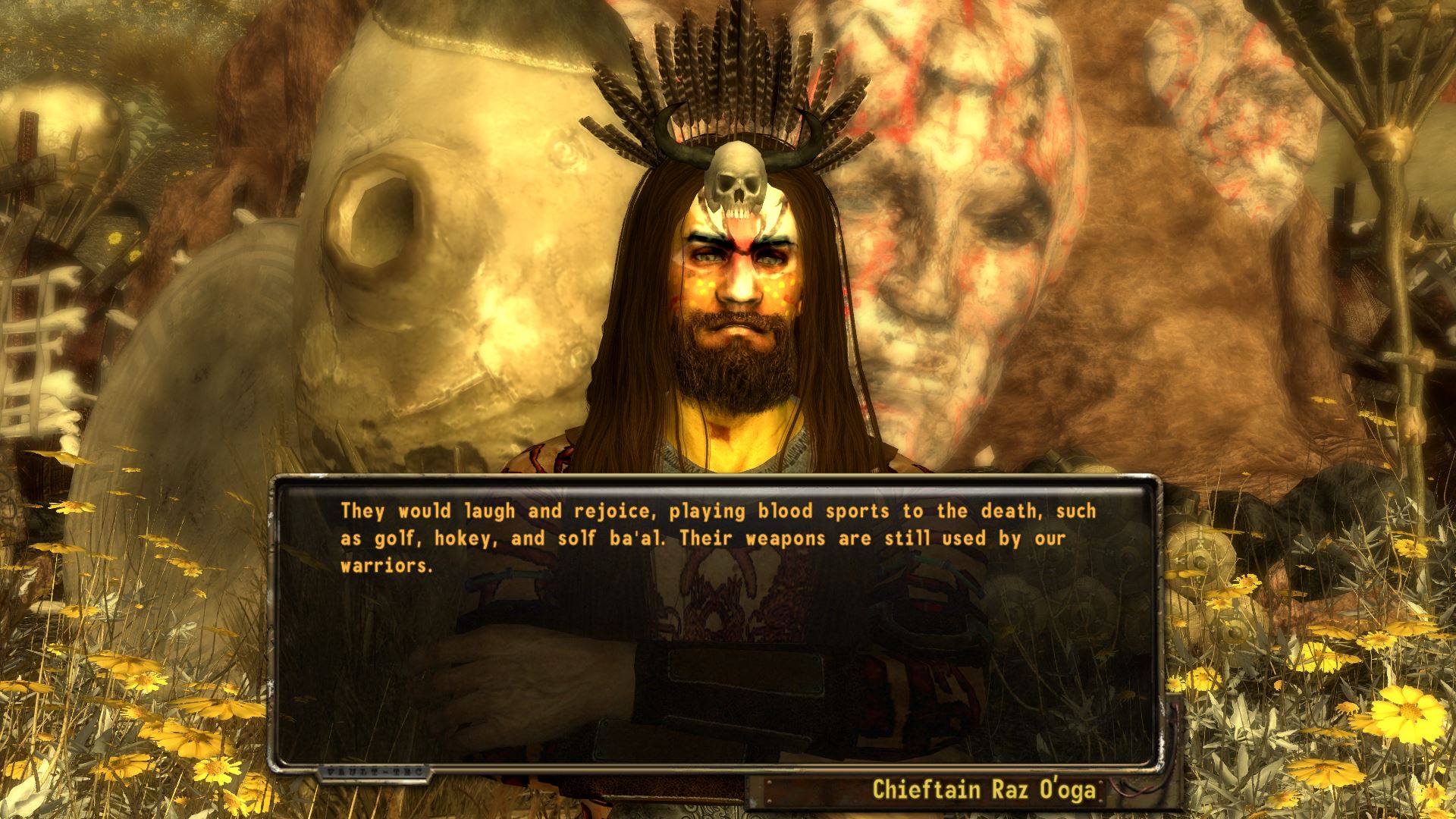 For my second run through New California, I'll be taking the more intellectual and scientific approach, and will likely use RobCo Certified, as recommended by Radian-Helix. Not tried it myself yet, but apparently it opens up a lot of fun robot tinkering options if you've got a high enough Science skill. They also recommend the ENB Series graphics overhaul, although my brief experience with it was a bit bumpy. Even with a good PC, the performance hit was just too much, but your mileage may vary. My screenshots were taken without ENB, and I think it looks fine.

There's more coming in Fallout: New California's future, too. Radian-Helix are working on additional side-quests centred around the NPC companions, and of course the door is open for mods to be made using New California's massive map as a foundation. Depending on what ending you get in New California, your character can continue their life as The Courier in New Vegas proper, and the upcoming Fallout: The Frontier will let you extend that story further north. Combined with New Vegas's excellent DLC, you might be in the wastes for a while - I'd pack strong sunscreen. 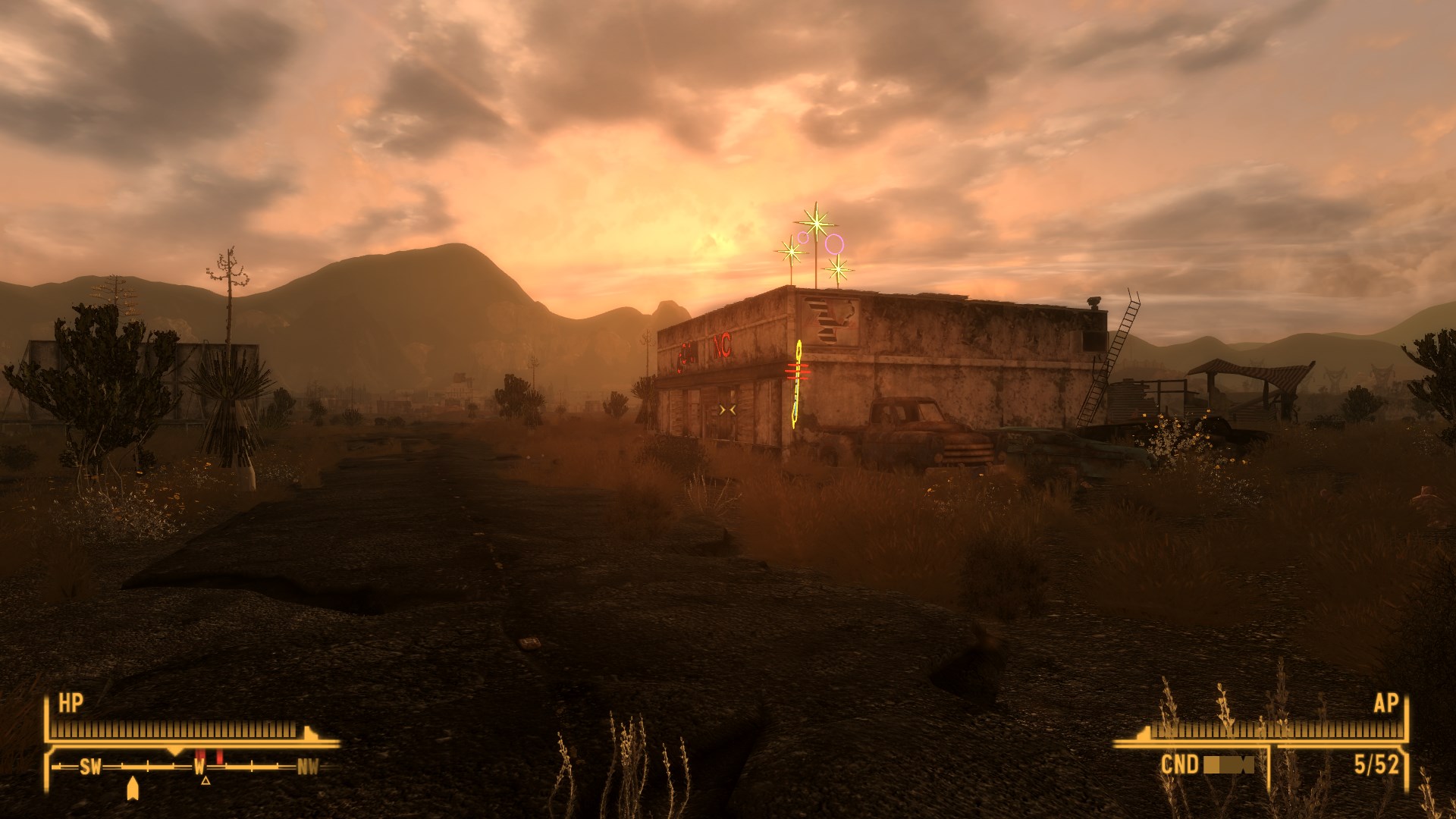 Fallout: New California is still growing, but all of its core story arc is complete and well worth playing, in my opinion. Grab it here on Mod DB. You can grab Fallout: New Vegas with all its DLC on Steam, Humble and GOG. New California not what you're looking for? Check out our guide to the best Fallout 4 mods.