Like (bullet) hell does it. In practice, it took me five hours of beating my guns against its unforgiving walls before I even saw the third of its five main stages, and another five before I reached its boss. That boss — the squid-faced D&D-inspired “Mine Flayer” — backed me into a corner with concentric rings of bullets, before sending waddling ammo boxes my way, each of which exploded once its shot timer counted down.

On my next try, I died before I even reached the first boss. At that moment, I thought I’d be apocalyptically frustrated, but it’s hard to stay angry too long at the Gungeon’s grinning, powder-packed residents. Dave Crooks, Dodge Roll’s lead developer, had a set of mantras in the making of Enter the Gungeon — including “every impact must be explicit” and “everything must feel fair” — but by far the most important in my estimation was “everything must have a face.” 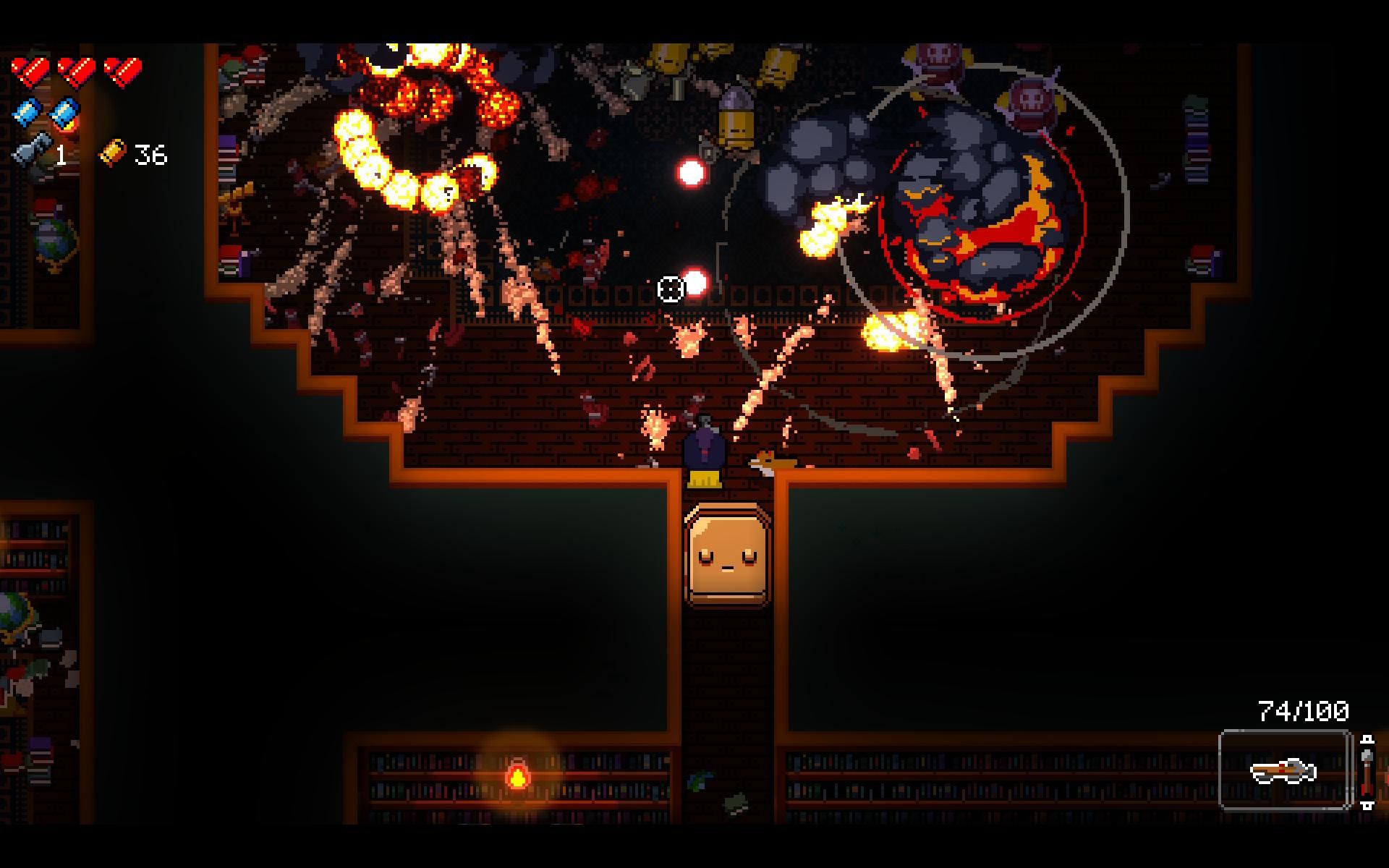 That rule generally kept me smiling even as I died, died, and died again to the Gungeon’s citizens. They include shell-spewing snakes, heavily-armed beholders, and flailing death knights, each one a walking reference or pun. The Gorgun is a snake-bodied, snake-haired woman with dual pistols; the Cannonbalrog is borrowed from the mines of Moria, and is a snorting, flaming ball of demonic fire. Other bosses — the Gatling Gull, the Kill Pillars, the Trigger Twins — are similarly memorable, but my favourite enemies in the game remain the basic bullets. These creatures lowly chaff and infest each level, but remain as deadly as they are cute, tottering around the game’s main and secret stages clutching handguns, shotguns, and rifles so big and unwieldy that they look like they’re going to fall over any second.

They’re not to be ignored, though. As in Dark Souls — a clear influence for Dodge Roll’s name, let alone its game — lowly foes can still trip up a blasé player. Enter the Gungeon is stingy with health, offering players three hearts (each of which can take two hits), as standard. I’d invariably drop half a heart (or more) on the first stage to stray bullets, the red-white blobs drifting across the stage and into my character’s hitbox while my attention was focused elsewhere.

I started allowing myself a restart when this happened, deciding that nothing short of a perfect run would set me up to plumb the depths of the second, third, fourth, and fifth floors of the Gungeon. It was only hours later that I realised that wasn’t such a great idea. Enter the Gungeon’s floors are generated at the beginning of each run, and both the challenge, and the loot on offer, can vary wildly. Securing a comparatively easy sprint to the first door is useful, when the room layouts provide sufficient cover, and enemies conspire not to overwhelm. But more important is getting your hands on a good gun early.

These weapons can make or break a run, and players will now be seeing more of the best stuff after the latest update — July’s Advanced Gungeons and Draguns — has upped the drop rate of top-tier weaponry. I felt this change a few times: most notably after a bout of particularly sloppy play that saw me reaching for the restart option before I pulled the “AU Gun” out of a chest. A clear analogue for James Bond’s Golden Gun (the flavour text notes “some assembled required”), the AU Gun shares that cinematic shooter’s lethal effects, slapping down most enemies with a single bullet. With some judicious ammunition conservation, and another helpful drop as a secondary weapon, I was carried far into the Gungeon’s second floor and managed to drain half of the boss’ life bar before my earlier failures caught up with me. 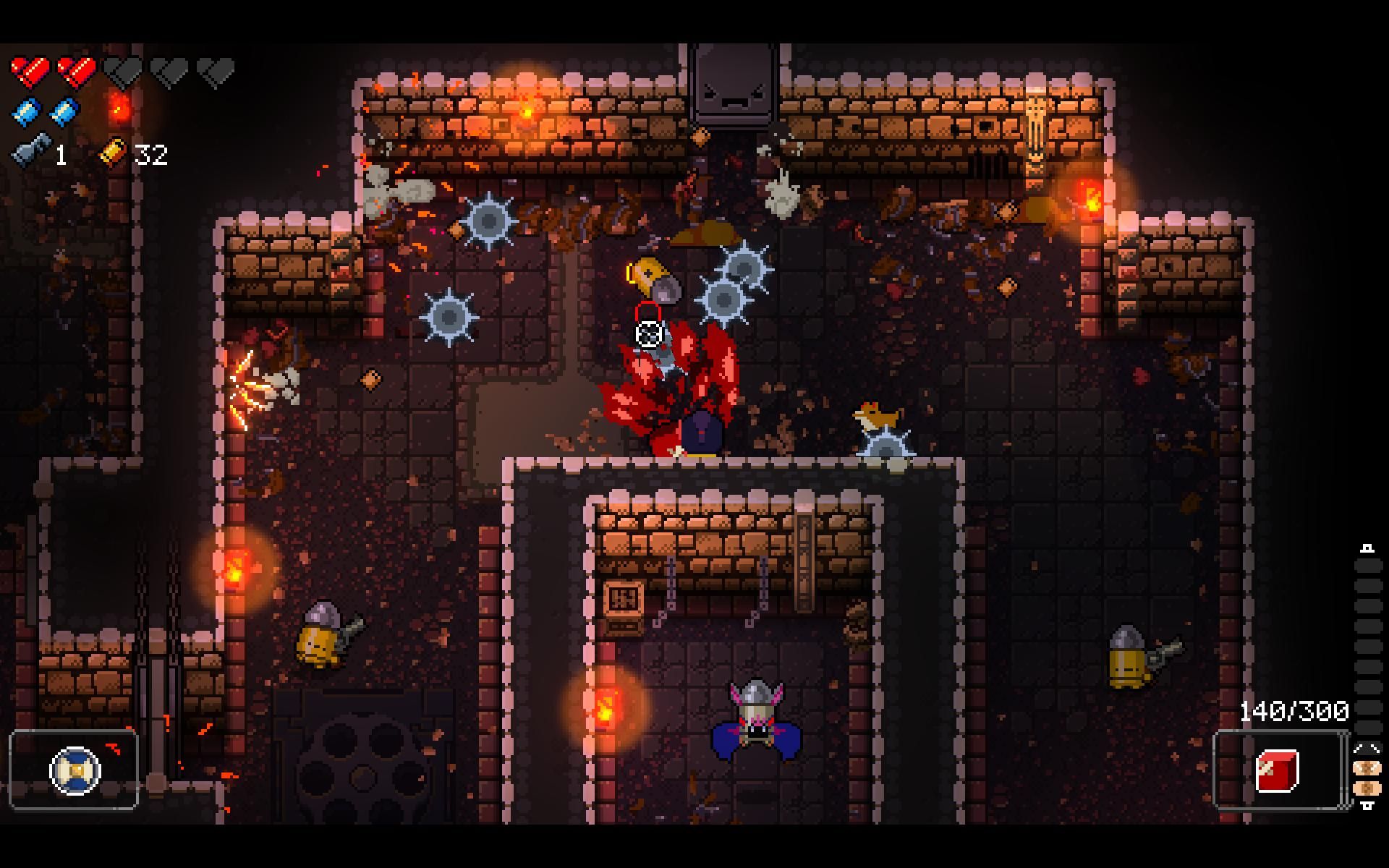 It’s these guns that are the star of the show. Dodge Roll’s philosophy seems to be pun first, design second, and there are some fantastically silly weapons as a result. The Black Hole Gun makes a Soundgarden reference, the Origuni fires folded paper, and the Microtransaction Gun charges you one coin every time you fire it. The arsenal is packed with nods to other games, too, including the new Combined Rifle, nicked from Half-Life 2, and the “Exotic” rocket launcher: a copy of Destiny’s infamous Gjallarhorn.

Most of these guns are enjoyably different in how they work. The T-shirt Cannon lets us live the universal fantasy of firing T-shirts into crowds, but it’s not a particularly powerful weapon. Fortunately, there’s an upgrade: where the T-shirt Cannon appropriately fires T-shirts, the Poxcannon fires poisoned T-shirts. These lime green fashion statements not only knock enemies back (RIP Maude Flanders), but also leave puddles of nasty green goo where they connect, damaging any enemies who happen to toddle through them.

The Rad Gun is a more literal interpretation: it’s a pistol that wears a trucker hat and “rides” a hand-sized skateboard. Reloading the weapon flips the board, which is rad enough, but it also gives players an opportunity to perform a Gears of War-style active reload. Press the reload button at a set point in its animation, and the next clip will do extra damage. Perform that feat again, and the damage increases further. Manage the perfect reload four times in a row, and your bullets double in size and start sporting sunglasses.

Enter the Gungeon is dense with these mini mechanics and hidden games. The Rad Gun affects a secret stat — “coolness” — while the Huntsman (a shotgun glued to an axe) increases the wielder’s “curse” when held, a modifier that eventually sees the player chased by a giant unkillable bullet-spewing reaper. Some weapons can charm enemies, turning them to the player’s side on their travels around the Gungeon, while weapons like the Magic Lamp and the Gunslinger’s Ashes call upon genies and ghosties respectively to materialise and attack foes.

Other weapons are simpler in application: the Snakemaker, for example, turns some enemies into snakes. Neat! 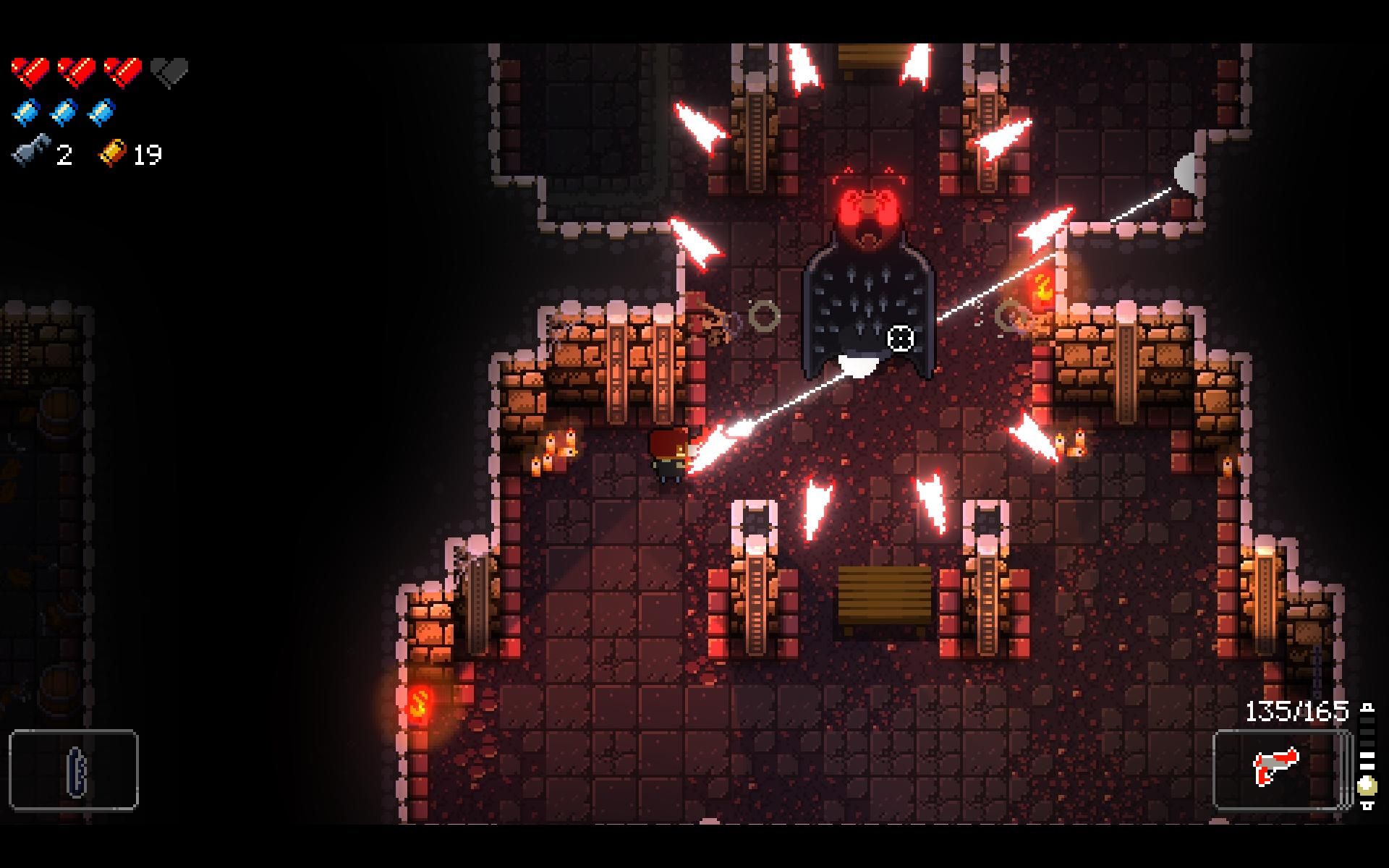 An S-Tier weapon like the Zorgun (fires homing bullets, last shot in a magazine explodes), the AKEY047 (shooting chests unlocks them), or Dark Marker (when charged, fires two shots that meet, explode, and remove all bullets currently in the room) can make the early stages of Gungeon runs trivial. On the other hand, reaching the second or third floors with starter weaponry or D-quality gear (like the Futurama-inspired Wind-Up Gun or the Klobbe, a nod to Goldeneye) is likely a death sentence for most standard players.

The new update has also increased the number of weapon and item synergies: special bonuses that are unlocked when players hold certain items at the same time. These used to kick in rarely, given the sheer number of guns and items on offer, but Advanced Gungeons and Draguns has introduced a new Synergy Chest that’s likely to drop a weapon or item to complete a set, unlocking a combo in the process. These chests aren’t common, but the update also ushers in a new NPC — Synergrace — who will occasionally appear in the Gungeon and sell players a Synergy Chest for a price.

These changes do make Enter the Gungeon feel like a more generous game than it was before, but even with boosted drop rates, I found myself hitting the wall when — even after hours of repeat runs — I just couldn’t get a decent gun to drop. These stretches felt painful, as I went on tilt, convinced I needed primo weapons to even make it past the first stage when others were completing no-hit runs with base guns. For those advanced players, the kind of Zen figures that can close their eyes and dance through screen after screen of bullet hell, a new turbo mode makes Enter the Gungeon even harder.

At the moment, I don’t need it to be harder. Even on standard settings, and even with tweaks to good gun rarity, Enter the Gungeon still shoots a fine line between fun and frustration, but fortunately, it comes down on the good side of that split more often than not. The drops don’t always feel fair, but even after my fiftieth untimely death, I found that the Gungeon was deep enough enough to keep me coming back. After its latest update, I'd suggest you take a trip too.