Play games online and you’ll be familiar with the idea of a “skill ceiling”: the concept of how good it's possible to be at something, before there's no more room to improve.

Fortnite Battle Royale has one too, except it’s a literal ceiling. I’m trapped underneath it — a flat pane of patchwork brick — by a bunnyhopping bear-person with a shotgun. I try to jump to safety, but manage only to donk my head, as the six-foot cuddly toy shoots me in the back.

As metaphors go, it’s an effective one, describing the extra dimension that Epic’s Fortnite brings to the now-familiar Battle Royale format: specifically, the ability to build things. In addition to guns, Fortnite lets players harvest wood, stone, and steel, before turning those raw materials into walls, ramps, and — yes — ceilings. Clever players can use these fortifications defensively, chucking up barricades, blockers, and even full-fledged forts in a flurry of left-mouse clicks, but the best players will also use them on offense. That’s how I ended up trapped in a flat-pack coffin by an anthropomorphised teddy.

I saw the bear-person coming, pink and fuzzy on the horizon. I sighted them in my rifle scope, but as I pulled the trigger, they blocked my shots with the beginnings of a ramp that aimed up into the swirling purple sky. They disappeared from my view but I knew they had kept running, their progress marked by the creation of more ramp: wood and stone panels thrown down as they ran like that train scene in the Wrong Trousers. Just as I centred myself, moving my aim from the top of the ramp to its base in a bid to send it crashing to the ground, my foe leapt from the top of their creation, landing behind me. 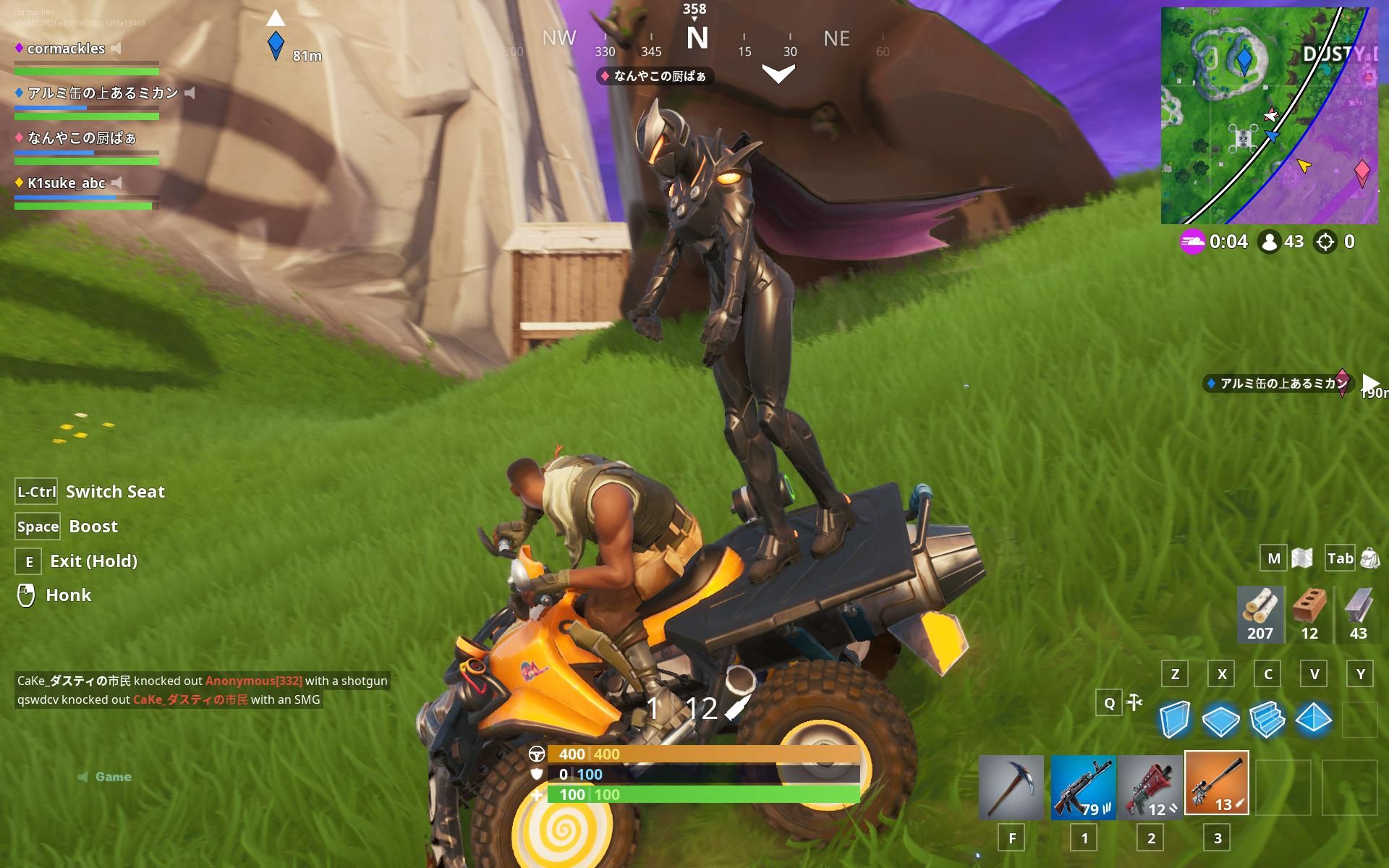 I wheeled around, but there was another ramp, built over my head. Another one was thrown up to my side, and a wall, to my rear. I was being penned in faster than I could sight and shoot my attacker. The bear topped it off with the aforementioned ceiling, and then appeared in the only crack of daylight they’d left for me in my makeshift prison, blasting wildly.

This kind of deftness is commonplace at this point in Fortnite’s life, I discovered, as I spent time getting killed by and then spectating the better players in the game’s solo, duo, and squad Battle Royale modes. These players’ skill and practice was typically denoted by the amount of cosmetic items their character was wearing, but while they all dressed differently, they all seemed to be able to assemble a functional fort in a fraction of a second while still tracking and shooting a target.

I’m both intimidated and impressed by these players, who have had almost two years with Fortnite to climb towards that skill ceiling. That time has come across nine “seasons,” each marked with new story, weapon, and cosmetic updates. The latest of these began in early May, giving the game a sci-fi makeover, adding new secret collectibles, redesigning one of its best known locations, reintroducing a previously shelved weapon, and installing a new fast-travel wind tunnel to whisk players quickly around the map.

That wind tunnel is my favourite introduction with this latest update: a fun solution to a problem that plagues other Battle Royale games. Where matches of PUBG or Apex Legends are often punctuated by tedious on-foot slogs as you trudge to get back inside the confines of the closing ring, Fortnite’s system not only speeds the process, but makes getting there enjoyable, a horizontal skydive that circles the centre of the game’s island. 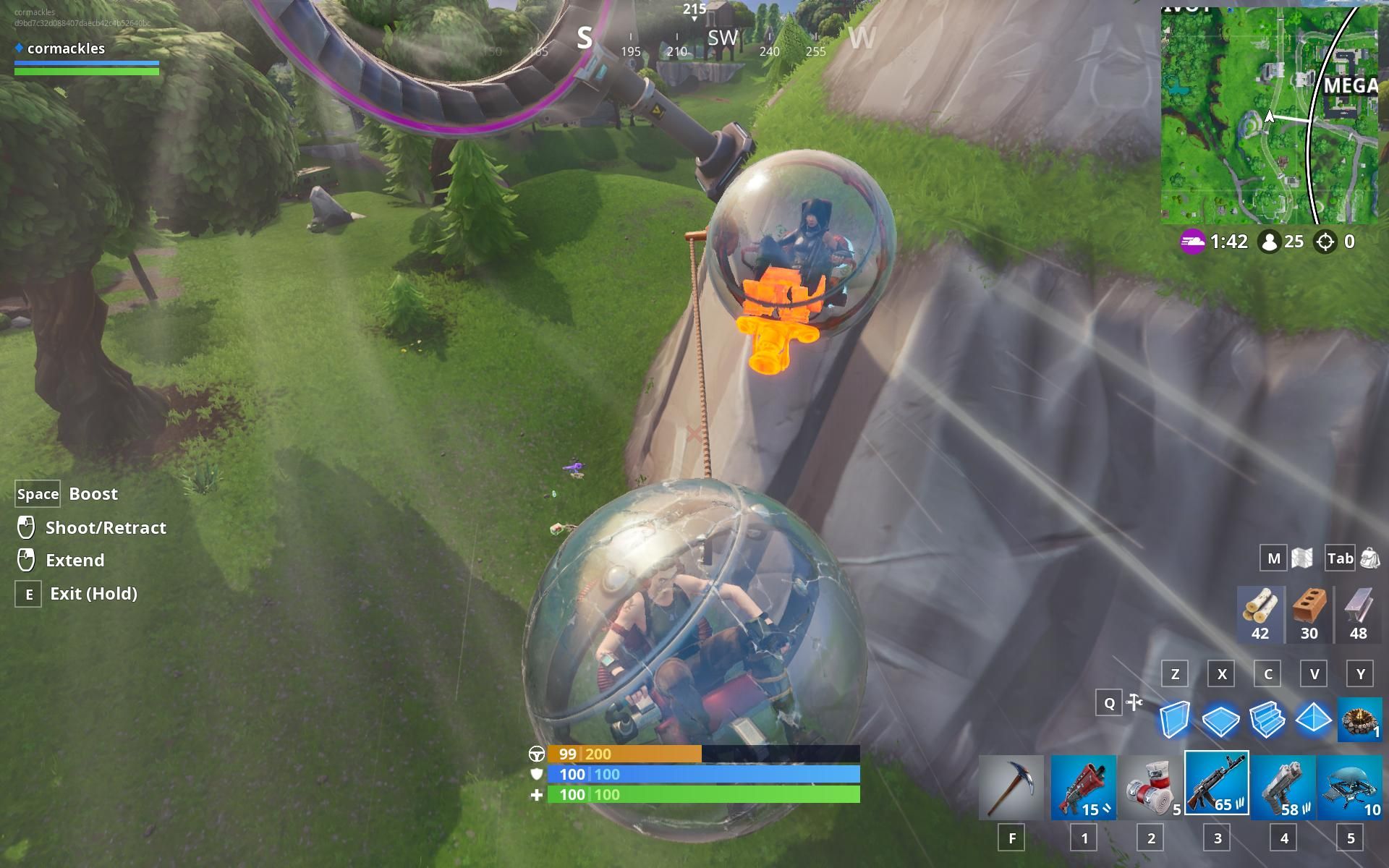 There’s nothing to stop players getting Fortnite’s vehicles into the slipstream, either. I had a memorable mid-air duel with another player while we were both at the controls of Fortnite’s “baller” vehicles — transparent hamster balls with grappling hook plungers glued to the front. I’d grappled to their ball, they’d grappled to mine, and we bounced happily back and forth off each other — complete with little “sproing!” noises — as we hurtled in a loop around Fortnite’s cartoony countryside. We finally built up the momentum to escape the wind tunnel after a few minutes of travel and came to rest on the crown of a nearby tree, our balls fused together until my opponent decided to disengage and jump out with a shotgun. Deciding that discretion was the better part of valour, I put my ball in reverse and boosted from the top of the tree, bouncing happily to the forest floor below and out of sight.

That retreat was in part a simple survival technique, but also because I preferred my time behind the wheel to my time with gun in hand. Fortnite’s shooting is not its strong point, and while its array of shotguns, SMGs, rifles, and other weapons are accurate, they pale in comparison to the arsenals of its peers. They lack Apex Legends’ pleasing recoil, as well as PUBG’s easy lethality, feeling more like you’re ticking points off a health bar than actively shooting an opponent. This is particularly apparent in Fortnite's limited time modes, which often change the game from last-person-standing Battle Royale to respawning team deathmatch, putting its perfunctory shooting at the fore.

Shotguns — especially the new combat shotgun — seem to be the community’s preferred weapon at the moment, but I had the best time with the boom bow. This lo-fi weapon fires rocket-tipped arrows, and requires a few moments of draw time before it can be fired at maximum range. Unlike most of Fortnite’s weapons, hitting a moving target with the boom bow feels great, the resultant explosion and insta-kill a just reward for a difficult skillshot. 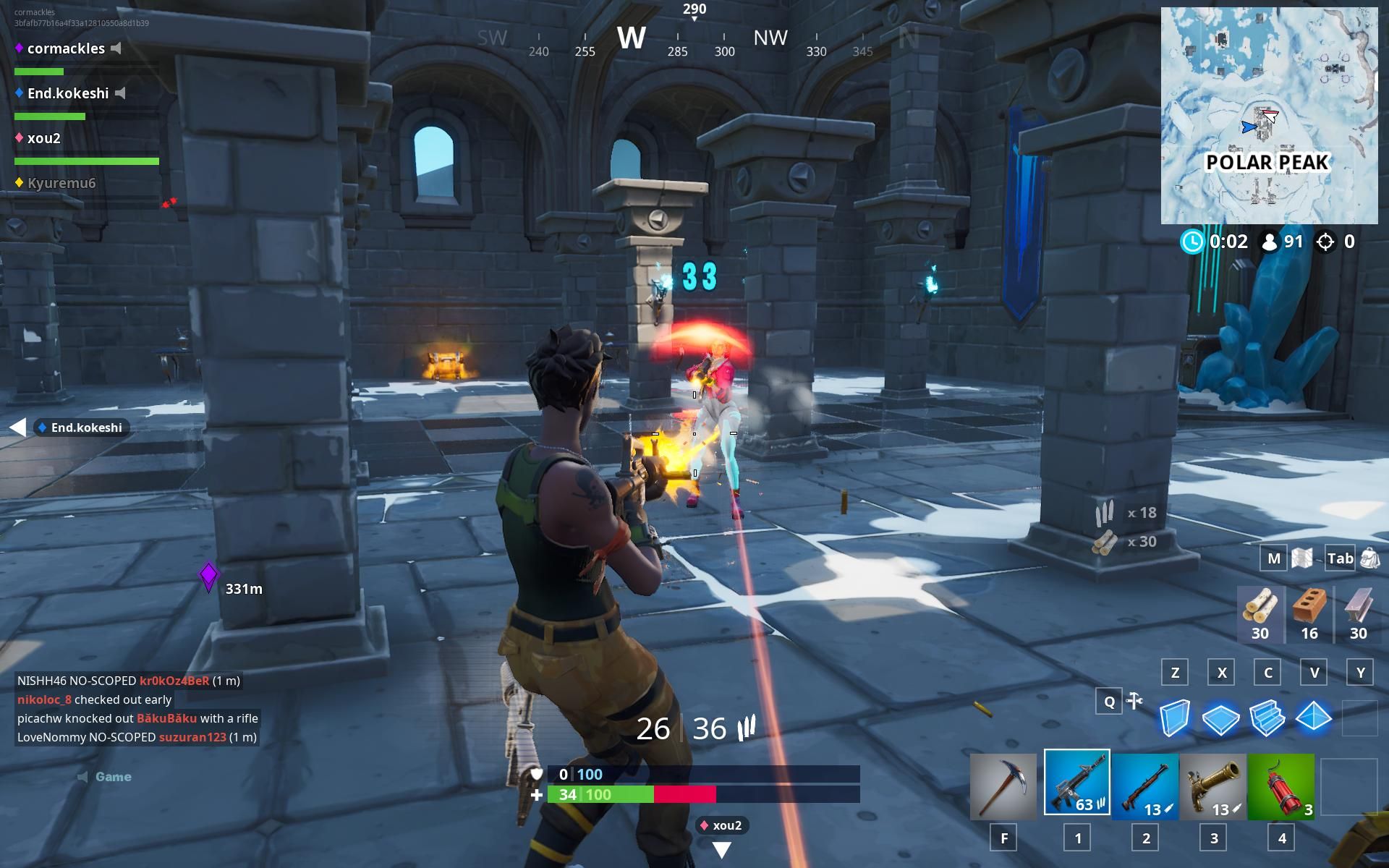 Season 9’s newest weapon — the drum gun — is much less exciting than the boom bow to actually use in the game, but its reintroduction does show how Fortnite keeps itself feeling active and alive. The Mafia-esque drum gun was first introduced in July last year, but removed a month later and placed in a “vault” of retired items. It’s back now, after players worked together to push a giant alien rune across the map until it reached a spaceship, kickstarting a volcanic eruption and opening a portal to a dimension containing six retired items.

Epic also used the opportunity to redesign Titled Towers and Retail Row, two of the game’s most heavily trafficked settlements. The changes likely won’t mean much to new players who didn't fight there before, but everyone gets to reap the rewards of a better-designed and better-looking map with visually and mechanically altered areas. Fortnite’s map, with its icy south-western corner, its expanse of desert, its erupted volcano, and its dried lake is now vastly different to the mostly-green island that players landed on at launch.

Season 9 also uses its alien heritage to introduce a far-future aesthetic, justifying the introduction of a range of neon-y cosmetics to the in-game store. It feels like Epic’s playing catch-up with its cosmetics, trying to bolt a coherent look and visual feel to a game that even the bluest of blue-sky thinkers within the company didn’t think would become as big as it has. At launch the game’s characters had the smirking, dead-eyed look of the supporting character from a straight-to-Netflix Dreamworks movie — like if the nightmare baby from Johny Johny Yes Papa grew up with guns around the house. Epic’s solution has been to throw everything at the wall and see what sticks; or at least see what gets bought in the cosmetic store. 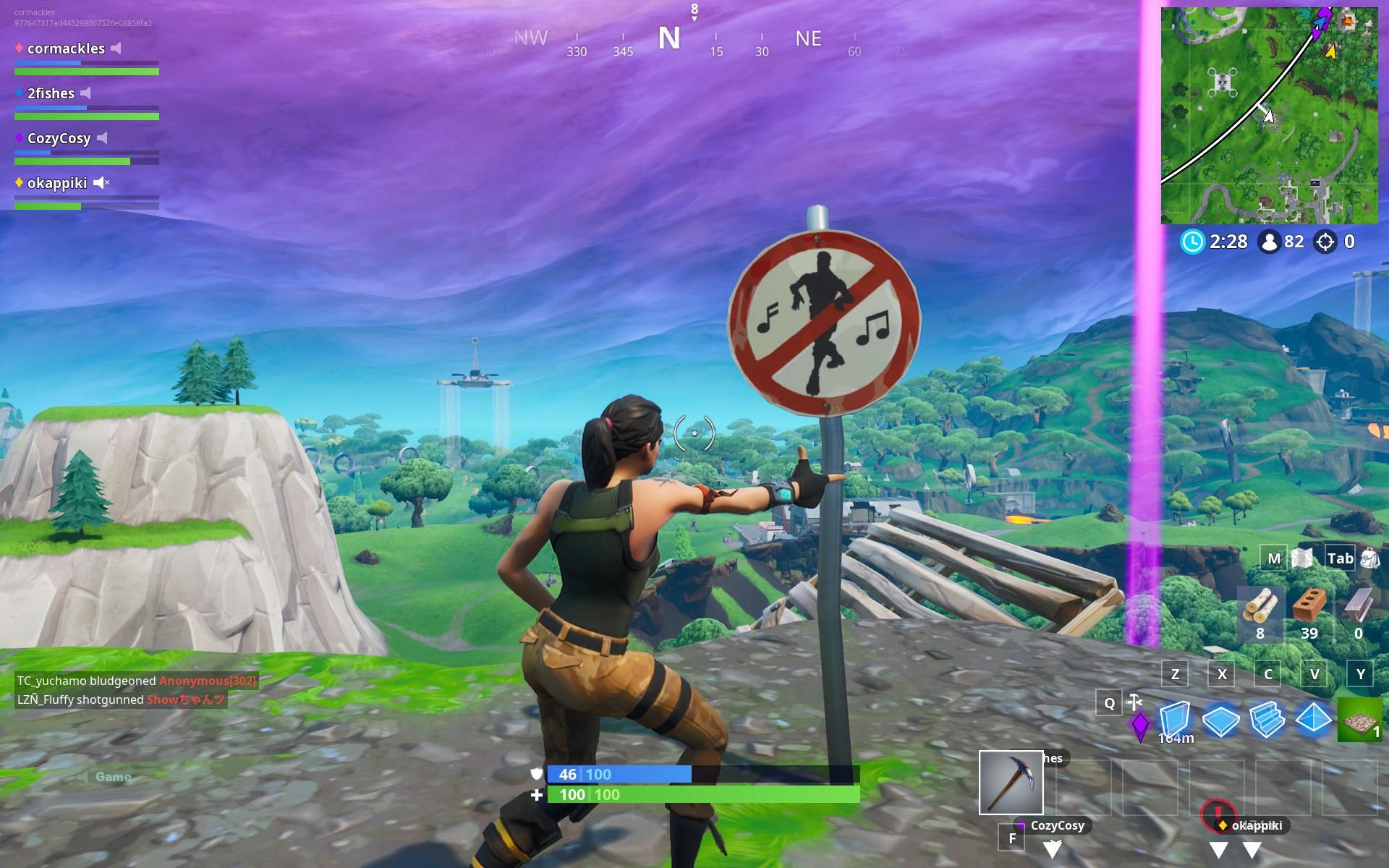 It’s a baffling fiction at this point, a melange of robot cats, banana costumes, DJ sets, alien invasions, pirate ships, cowboy references, and Avengers crossovers. You can, at least, ignore it entirely and still play the game — assuming you’re not being teased about your basic-ass glider by your schoolfriends.

It’s no wonder that Fortnite has been a particular hit with the younger generation. The breakneck pace of iteration and introduction, as items are added, data is analysed, and areas are torn down and rebuilt again is perfect for short attention spans, where newness trumps all. It certainly helps Fortnite feel fresh, but it’s coming with a cost. Epic’s supposedly harsh crunch schedule was reported last month, employees and contractors brought in to work ludicrous hours to keep the patch and update cycle going.

It's of little significance compared to the alleged human cost of updating the game, but Epic also seem to have some confusion about what they want their game to be: silly fun playground for all or serious competitive challenge? The developers are pursuing both and tripping over their own feet in the process. As I was playing for this column, the company announced that they were disabling vehicles completely in the midst of qualifiers for the Fortnite World Cup — a competition with millions of dollars on the line — because of a bug that saw some players get stuck permanently inside them. This isn’t the first time Epic have annoyed the competitive community, taking flak last year for throwing in the poorly balanced Infinity Blade sword shortly before a $1 million tournament, and introducing planes that allowed competitive players to simply sit out the battle happening below.

These ill-timed introductions are the actions of a developer who is content to — to use the Silicon Valley maxim — move fast and break things. Epic are doing both. By moving fast, Epic have made Fortnite difficult to understand and acclimatise to for new players. But they’ve also imbued their game with a sense of momentum that means that, even if its shooting isn’t the equal of its peers, its growing fiction and its constant iteration has only heightened its skill ceiling and made it more enjoyable to play.

As for the breaking things, they’re doing that, too: their employees, allegedly, and their game, regularly. Epic will need to find a balance in order to keep both standing for the long term.