This is The Mechanic, where Alex Wiltshire invites developers to discuss the inner workings of their games. This time, Tacoma [official site].

Fullbright is running out of things to steal from the Shock series. “Like, we made a game that is basically about audio diaries for Gone Home, and now we’ve made a game that’s basically about the ghost sequences in System Shock 2 and BioShock with Tacoma,” co-founder Steve Gaynor tells me. “We’re running out of things to rip! What are we doing next?”

He’s laughing about it, but it’s only half true, since Tacoma is really about taking audio diaries and making them into a game. You don’t find and passively listen to them, you’re an active observer of augmented reality recordings of the crew members of a now-deserted space station. The distinction makes a huge difference, and had a profound effect on the way Tacoma’s story was written, because it posed complex puzzles of fitting dialogue and direction into both space and time. All because in Tacoma you can:

As you explore the space station Tacoma you’ll enter areas in which you can watch fragments of recorded footage of the crew. An interface appears, allowing you to play, pause, rewind and fast-forward, and characters, represented by stick figures encased in quivering coloured outlines of their bodies, walk, recline and float through the spaces, talking to each other, enacting pivotal moments in the station’s recent history.

Since you get to manipulate time, they’re not static recordings. You’ll watch one conversation between characters and see one of them peel away and walk into a different room. You can choose to go with them, leaving their partner behind, to see what they did next, then rewind to see what the other did in their absence. You can run through the area, finding other crew members to watch, and use information they reveal to access new areas.

Tacoma is a highly spatial game, about moving through the station to follow the events that took place within it. It’s something that’s integral to the games that came before it, of course, from System Shock to Fullbright’s first game. “Really having to be in a detailed dialogue with the space is crucial to Gone Home, so we wanted you to have that level of connection and control over how you discover the details in these character scenes,” Gaynor says. After all, the order in which you choose - or happen - to witness the crew’s actions affects how the game reveals the story to you.

Augmented reality is the thing that binds it all together, essentially allowing rewindable ghosts to exist in the world: with you and yet not with you. It’s a pretty convincing speculative reach for the kind of technology that might exist 75 years in the future: absolutely pervasive, absolutely integrated, like smartphones are today. “If the crew members are always being tracked by their employer, in case there’s an emergency or they’re doing something they shouldn’t, all of that stuff is being recorded and we get data that allows you to be in the space with the characters without being there physically,” says Gaynor. 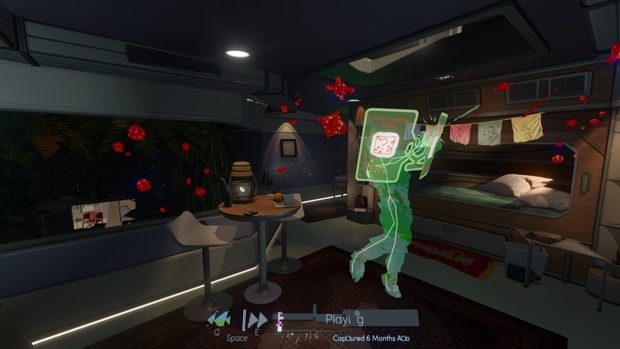 The AR scenes started out as single linear sequences, but soon Fullbright started pulling in inspiration from immersive theatre like Punchdrunk’s Sleep No More, in which the audience occupies the same space as the performance. As the performers move around, so does the audience, if they choose. “If two performers cross paths you have to decide who you’re going to follow, knowing you’re only going to see half of the experience. That’s cool and interesting, but the flipside is that in a digital environment you can rewind to where they met and follow the other and build the full picture.”

The way Gaynor tells it, the technical side of being able to fast-forward and rewind the scenes was pretty straightforward. A quick prototype by programmer Hannah Brown proved the concept. “But it changed the shape of the story a lot, because within each section it’s non-linear. You might see information in any order within a larger scene, so it took Karla [Zimonja, studio co-founder] and I a good amount of time to figure out what kind of story you tell in this way, and how you tell it.”

How to start? With the space station, of course. Tacoma is an automated transfer point for cargo moving between a holiday resort on the moon and Earth. So what crew would it have? Fullbright settled on six: an administrator, mechanical engineer, network specialist, medic, operations manager, and a botanist, who manages the plants which manage the station’s atmosphere. From here, they started to work out who are these people were, and what their relationships with each other would be, before finally working out what happens to them in the story.

But even before that came together, the space station itself had to be created. Level designers Nina Freeman and Tynan Wales blocked out layouts that would make functional sense and be interesting. In Operations there’s the cargo bay, operations specialist Clive Siddiqi’s office, gym and locker room; once they were laid out in relation to each other, Zimonja and Gaynor could start to write the script into the physical space.

“You can’t start writing scenes until you have that,” says Gaynor. “You have to be able to say that [administrator] E.V. will start in the cargo bay with [network engineer] Nat and [mechanical engineer] Burt, and Clive will be in his office, and she walks from here to here, so she’ll interject into this scene in Clive’s office 30 seconds after it starts, and that means the stuff in the cargo bay has to take the right amount of time.”

The script was a kind of choreography, strictly timed according to the station’s spatial design. The team acted out dry runs of the scenes as they honed the dialogue and ensured it all lined up. One sequence has Nat jumping into Burt’s arms, sending them both crashing to the ground so loudly that two characters talking in an adjoining room hear. It’s a feat of staging, and also a demonstration of the fact the level design had to be pretty much fixed, because any change would transform the script, and the script would transform the voice performances, and they’d transform the animation. 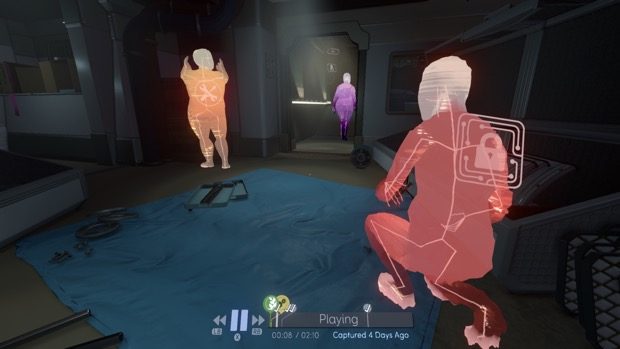 Tacoma’s dialogue was performed on a soundstage in LA well over a year before release so character animator Noël Clark could work to it. They weren’t motion captured, since it was hardly practical to recreate the station on the soundstage, but the actors performed face-to-face, often in the positions they’d take in the game, to better connect their voices with their in-game representations. Re-taking them weeks or months later would be extremely impractical.

For recording, each scene was broken into discrete sections, sustaining conversations as long as possible before they split into another thread, and then they were stitched together in the game itself, the recordings overlapping as the characters moved around the spaces. The first scene, set in the administration office, dining area and kitchen as the crew prepares to celebrate Obsolescence Day was probably the most complex, a shifting sequence of different conversations that join and split.

But though it’s complex in the sense of having many branching conversations, it’s one of the easier scenes to observe and follow, because everyone is generally in view. “Later scenes, even if they have less density in the timeline, can be more challenging to put together because we block off different rooms and you have to do more mental math of pulling the timeline back and find them and follow them to where they end up,” says Gaynor. 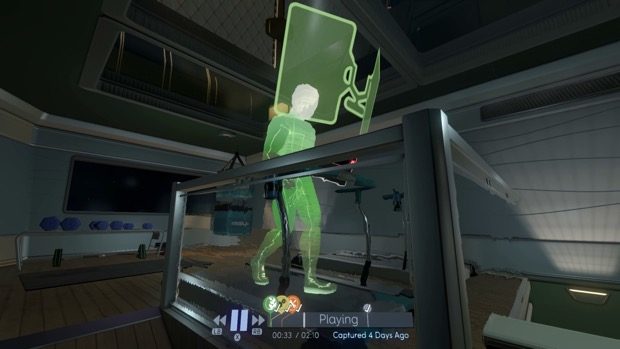 Other tricks Fullbright pulls to manage the player’s cognitive load is the way the characters’ stick-figure forms are colour coded, given a unique symbol that denotes their job and, when you mouseover them, you see their portrait, name and role. You never wonder who’s who, despite their abstracted representation. Subtly, too, the audio fades out conversations you’re not listening to, even if they’re taking place nearby, so you can focus on the one you’re facing, while occasionally allowing important loud interjections - Nat yelling across the room that food is ready - so they’re audible. The result is the chance to envelop yourself as a player in the drama, rather than the systems.

At heart, Tacoma is an Alien-like disaster story in the way it sets up a group of characters, posing questions about who each is and what part they’ll take in what’s to come, and then whittles them down. That means it’s filled with various dramatic reveals, but Fullbright can never be sure what a player already knows when a player sees them. They might witness a character having a panic attack and then managing to suppress it as they meet another couple of characters. Or they might see them meeting first and only gone back and seen the emotional pressure they were under afterwards.

“That’s hopefully a big part of what makes the experience of playing through the game interesting and surprising,” says Gaynor. “It’s cool and exciting for us to think about the implications of players experiencing something and not knowing at first that it means a lot more, and how that becomes a motivation to go back to what they saw before.” 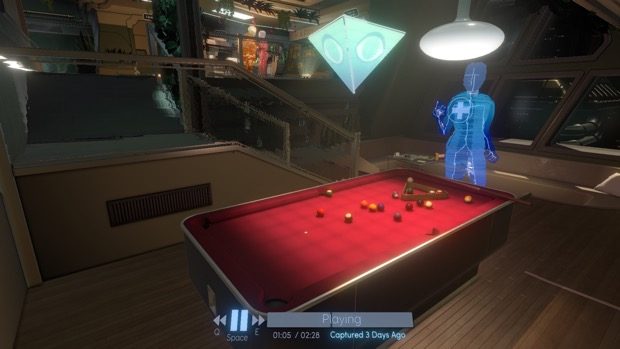 Tacoma is founded on self-driven discovery of these details, just as Gone Home was. “I’m always looking for ways to pay off the player paying more attention or thinking about the possibilities of what we’re putting on the screen,” says Gaynor. “For Gone Home, part of it is having Uncle Oscar’s story exist but be far off the beaten path. If you’re really looking at every detail and what the newspaper articles and the dates on the will and letter really mean, they do add up to something, so it says that if you do go as deep as possible, there is something there.”

When that principle is translated to a 3D space, that means having things happen in a space which has been vacated, and for those things to mean something, there to be discovered if you treat the space station as a real place and think to look everywhere.

Gaynor remembers his experience of going to Sleep No More, during which one character sends another to sleep before leaving the room. While the rest of the audience followed the first character out, Gaynor decided to stay, watching the sleeping actor for a few minutes until another character walked in with audience in tow. That’s when it all came alive for Gaynor. “I was the only connective tissue between the two events, the one person in the audience who saw it all. To define your role in the experience was really cool, and it very much spoke to player intent in a videogamey way that’s inspiring to us. Working those moments into a game like Tacoma speaks to what the player decides to do.”

In that sense, maybe Tacoma is still indeed ripping off System Shock thoroughly, and in the very best way.