If you're a fan of The Sims 4, or you know someone who is, or even if you just follow people who occasionally retweet simsposting into your timeline, you've probably seen something about Paralives by now. It's... a life simulator? A Sims-like? (I know The Sims can't be the only game of its type, but it's dominated the market for so long that the only other one I can think of is that weird adult one where the entire point was having sex.) It, by which I really mean the teeny tiny dev team, is being funded on Patreon.

Simthusiasts like myself have been quietly aware of Paralives for a small while now, mostly because of the very cool nature of the in-progress video clips that surface on a fairly regular basis. A few weeks back, though, there was a flurry of new interest when a new character creation video was released. After bunch of Sim YouTubers like lilsimsie did reaction videos and hyped it up, Paralives ended up with a lot of eyes on it, and I, in turn, hungered to know more. So I reached out to Alex Massé, who we might term the lead developer, to ask him some Para-centric questions.

Massé worked in the mobile games industry after graduating in 2014 (though he told me over email that he had been learning about programming and development since high school). He's always liked to work on his own projects, and consequently says he can "do a bit of everything." He continued: "I learned game design and 3D modelling by myself while working on side projects and game jams." Once he felt he had enough experience, he quit his job to make Paralives, launching the Patreon last year. It currently stands at nearly $36k per month, which is more than respectable for an indie game with no projected release date.

"I was really inspired by what the Ooblets team did, which is the marketing first approach," Massé explained. "As soon as they had their first screenshot of the game, they posted it on social media. So they were able to know there was interest for the game really quickly and use it to build a community during development." He liked the idea of involving a community, so Patreon appealed more than working with a publisher. And while Paralives was initially a solo dev project, Massé has been able to hire a small but dedicated team: 3D artist Léa Sorribès, communications director Christine Gariépy, and new programmer Anna Thibert, now collectively known as Paralives Studio. One of the original artists, Roxane Morin, has now left, but the goal is to hit a team size of 10.

Massé describes the marketing first approach of Patreon, where you build a community from the start of development, as "really motivating". Paralives certainly has what we could call the Ooblets effect. Screenshots and short videos, usually shared on Twitter, show simple but engaging things like the day and night cycle in the game, being able to resize objects at will, and a very fine level of control over everything in your mini-home. Rather than, for example, buying a single bed or a double bed, you can just place a bed and resize it yourself. Including making it a bunk bed. 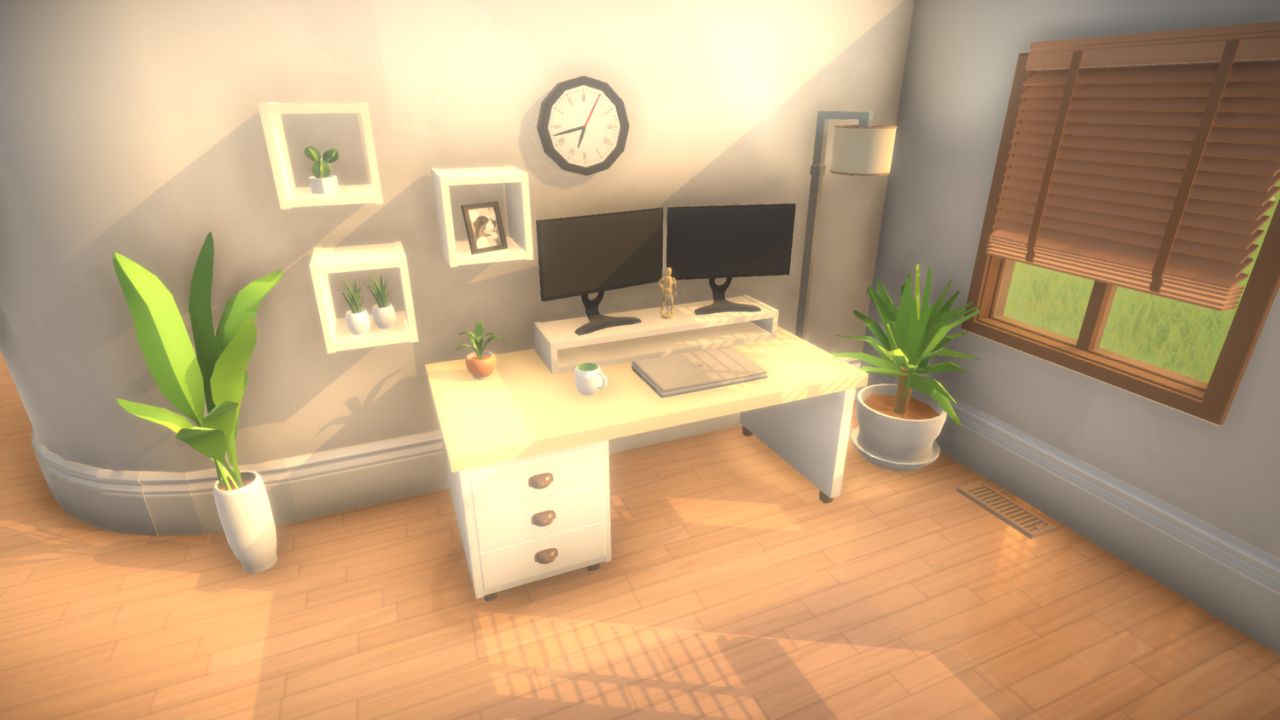 One watershed moment for me was the video showing how you can easily make split-level floors and curved walls in Paralives. This is an exciting development for veteran players of the Sims, where split-levels are only achievable by giving a house half a foundation, while curved walls are the stuff of dreams, so I asked Massé about them specifically.

"I got really inspired by Cities: Skylines and its road tool," he explained. "You can easily create straight or curved roads of any length without being restricted to a grid. I thought to myself that this would work really well for placing walls and building houses. It would allow players to be more creative with flexible tools like that."

Though the first version of the tool was quick to develop, Massé said that it ended up as quite a challenge to make it work in the context of building a whole house. They had to think about how you carve holes for doors and windows, or place objects on a wall that isn't flat. "We’re still tweaking it but it’s pretty solid already."

This, like everything, is subject to feedback from fans and Patreon supporters. Paralives has a very active Discord, where the dev team share news and updates. And in return, they get a deluge of ideas: pictures of mood-setting landscapes and buildings, spitballing over the life-sim elements (requests for Tummy time with babies, unrequited love, teaching teens to drive) and suggestions for character creation as granular as asking to make your Parafolk left or right handed. And, the team recently ran a survey on ethnic and cultural diversity, asking potential players what specific hairstyles, clothing and items from their culture they would like to see in the game. 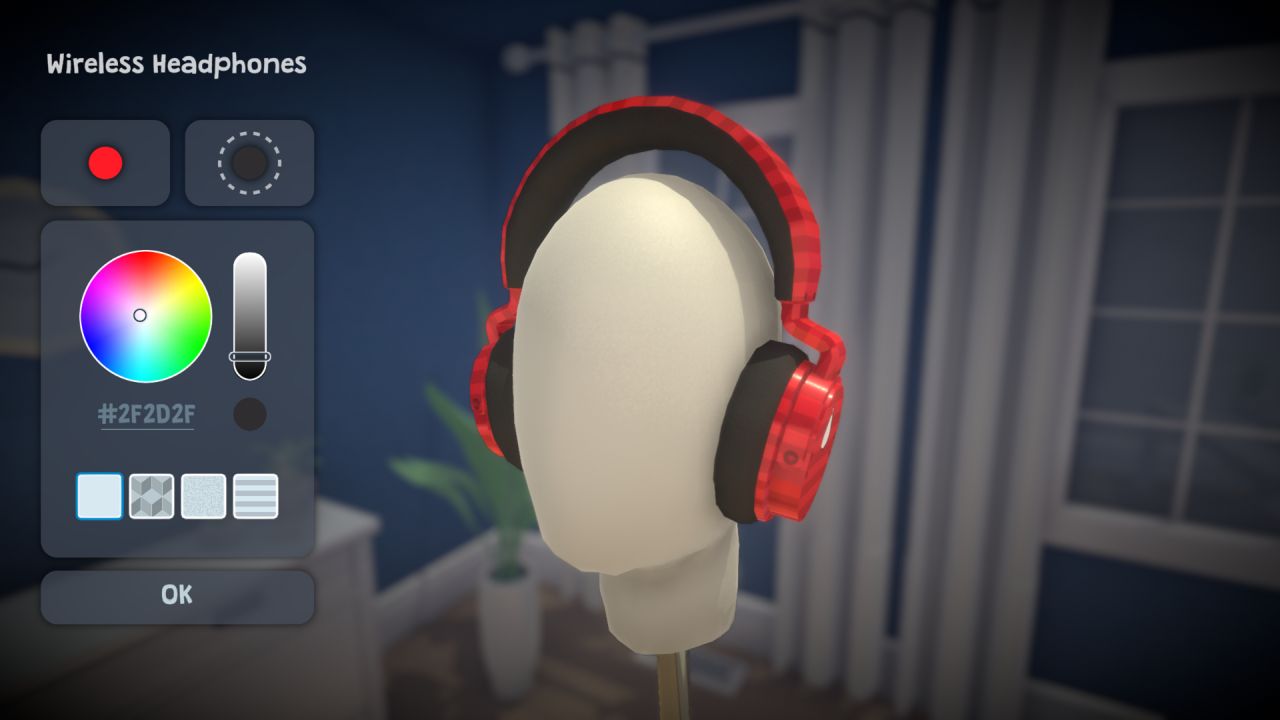 The Patreon even has polls where the supporters can vote on e.g. the name of the character creator (they chose 'Paramaker'). But making open development too open can have its risks, as the Unreal Tournament team discovered. Massé says that reading the ideas the community suggests helps them prioritise, and understand which features are most requested - he says that the community has even suggested things that the dev team wouldn't have thought of, and would like to include. "But we have to be careful to not over scope and stay true to our vision," he said, "which is making a fun and innovative game and being able to finish it and launch it. That’s why we won’t be able to integrate all the ideas but we have a huge list of possible features for updates after release!"

The official Paralives website has an FAQ listing planned features, as well as things that won't be in the game upon release (for example jobs will be 'rabbit hole' type locations that your Parafolks disappear to, you won't be able to see them at work as you can in The Sims 4). Release is still an unknown amount of time away, though. Massé theorises that one of the reasons The Sims hasn't had much competition in this genre is "because it’s a very ambitious project to tackle for an indie team. It’s like three games in one: house building, character creation and life simulation. And each of these requires a ton of features and content." And currently, Paralives has mostly been concentrating on the former.

"I decided to start with build mode because it makes sense to create the environment for your characters to live in first," Massé explained, but there's also a fair amount of detail work going in. "I’m a big fan of curtains, swings and suspended lamps swaying in the wind," he said, when I asked about his favourite details in Paralives. "Also, dust particles in the air! I believe these small details add a lot of life to the game and make for a great and peaceful mood. I’m looking forward to adding a lot more details like this." 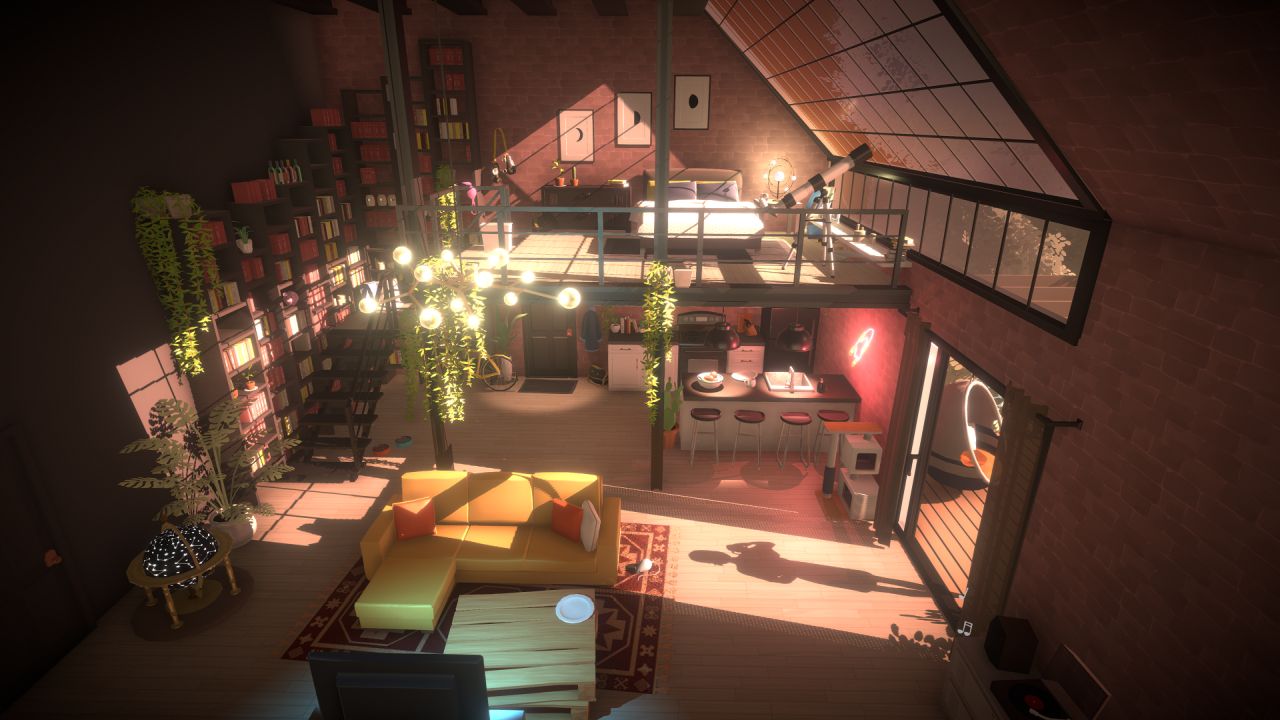 He added, though, that they have recently made good progress on the character aspect. That most recent trailer (embedded at the top of this article), for example, shows seamless editing of Parafolk Maggie, taking place in the house she lives in without needing to load a separate part of the game. You can change her hair using a colour wheel, and lovingly sculpt the precise angle of her arse.

The characters are designed to be distinct from other games as well as really visible in their environment, so while the buildings and objects have a more realistic look, the Parafolks themselves are a bit more stylised. Their design is closer to a 2D drawing, with brush strokes and strong outlines. At the same time, the team wanted to avoid making the Parafolks look "too cartoonish", so they have close to realistic proportions to allow players to recreate themselves, if they want to. "We’re still improving the style everyday but we’re really happy that people enjoy it so far."

This improvement in the character system, combined with the strong foundation of the building aspect, will now allow the team to make more progress in the simulation area, Massé believes. I, of course, am mostly a builder, so I've already seen plenty to get excited about from Paralives, but it'll be interesting to see more examples of the, you know, game-y bit of it in action.

Massé told me the team is designing and testing different ideas for personalities, jobs and interactions, and are "planning many innovations" for these parts of the game. "We can’t wait to showcase them when we’re ready!" When will that be? Your guess is as good as mine.

An early version of this article stated (incorrectly) that jobs would not be available in Paralives at all. The article has been updated to reflect that jobs will be available but in a 'rabbit hole' form. Sorry!