In order to take on Zorah Magdaros once more in Monster Hunter: World, you need to defeat two big dragons. The big bad dragon of the Ancient Forest is one of these, which so happens to series staple Rathalos. For newer players, this dragon's set of attacks can be quite daunting to fight against, especially when it comes to using its poison talons to inflict poison. This guide will go over what how to kill it, what its weakness is, and what to bring with you for this battle.

Rathalos is one of the bigger tests of your skill as a monster hunter, so making sure you have the right equipment and the right items is the key to succeeding in this hunt. While it is just about possible to do this fight solo, those looking for some assistance should go to our Monster Hunter World guide to find out how to bring in others to take on this ground-burrowing beast. 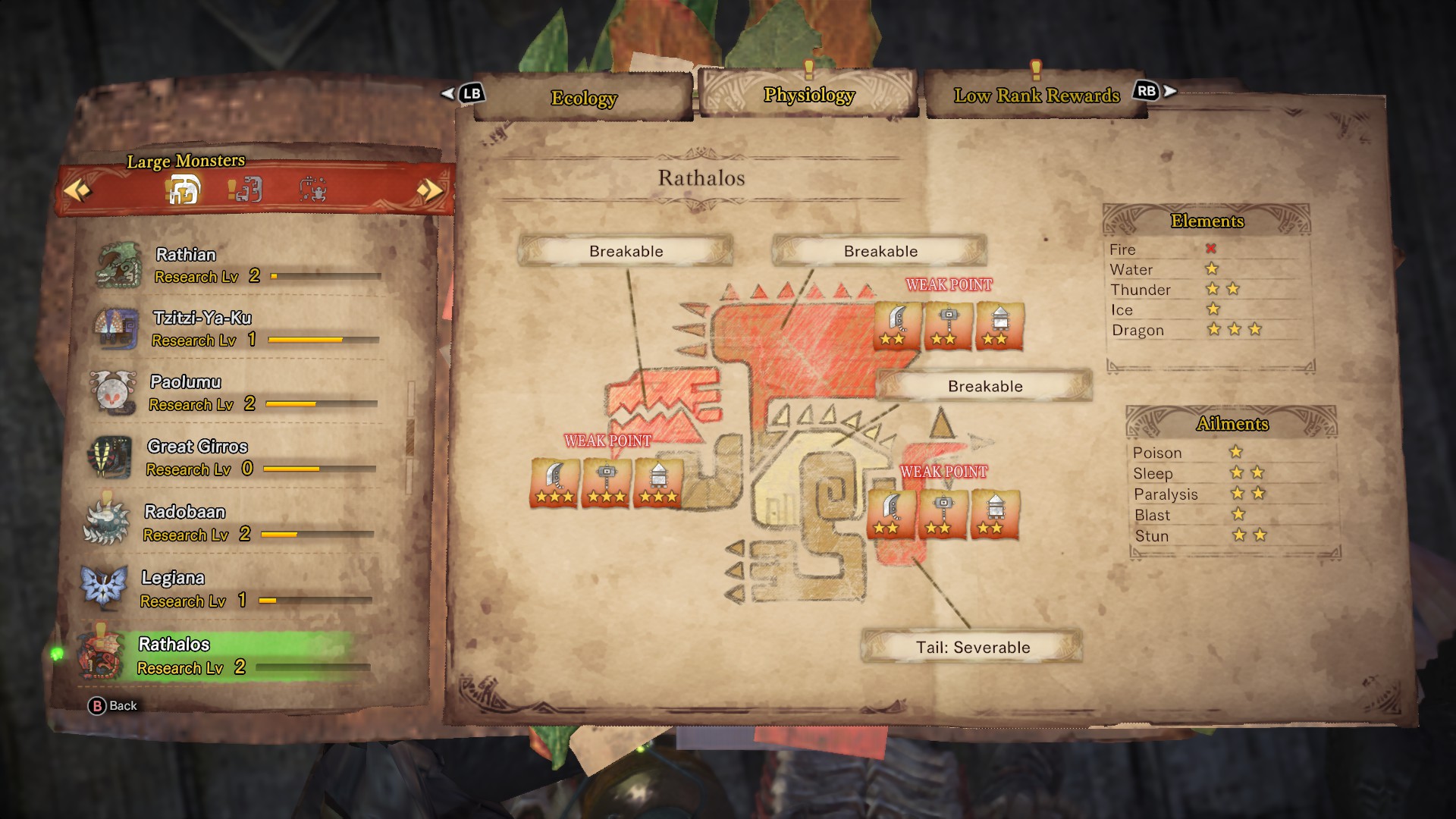 You probably won't have access to it when you are at this stage of the game, but should you somehow be able to wield dragon weapons, they're the most effective against Rathalos. Failing that, thunder weapons are your best option, while both water and ice do little damage. As this is a primarily fire-based creature, it naturally has a huge resistance to fire, so don't bring your flame weapons to this hunt.

Sadly for those who like to inflict status conditions, it has no particular weaknesses to any one status ailment. Sleep, paralysis, and stun are your best bet to do something, but their effectiveness isn't as good as it could be against other monsters. It has poisonous talons and breath fire, so it's relatively pointless to try to use either poison or blast ailment inflicting weapons or gadgets.

Rathalos has several breakable parts, such as the head, wings, and back, while its tail is severable. Its weakest point is its head, which is the fiery end, while the tail and wings are also relatively susceptible to damage. Severing the tail reduces the range of its tail whip, while breaking its wings can make it slower for Rathalos to take to the sky. Since it spends a lot of time in the sky, it can be advantageous to use ranged weapons, giving you more time to dodge its fire attacks. 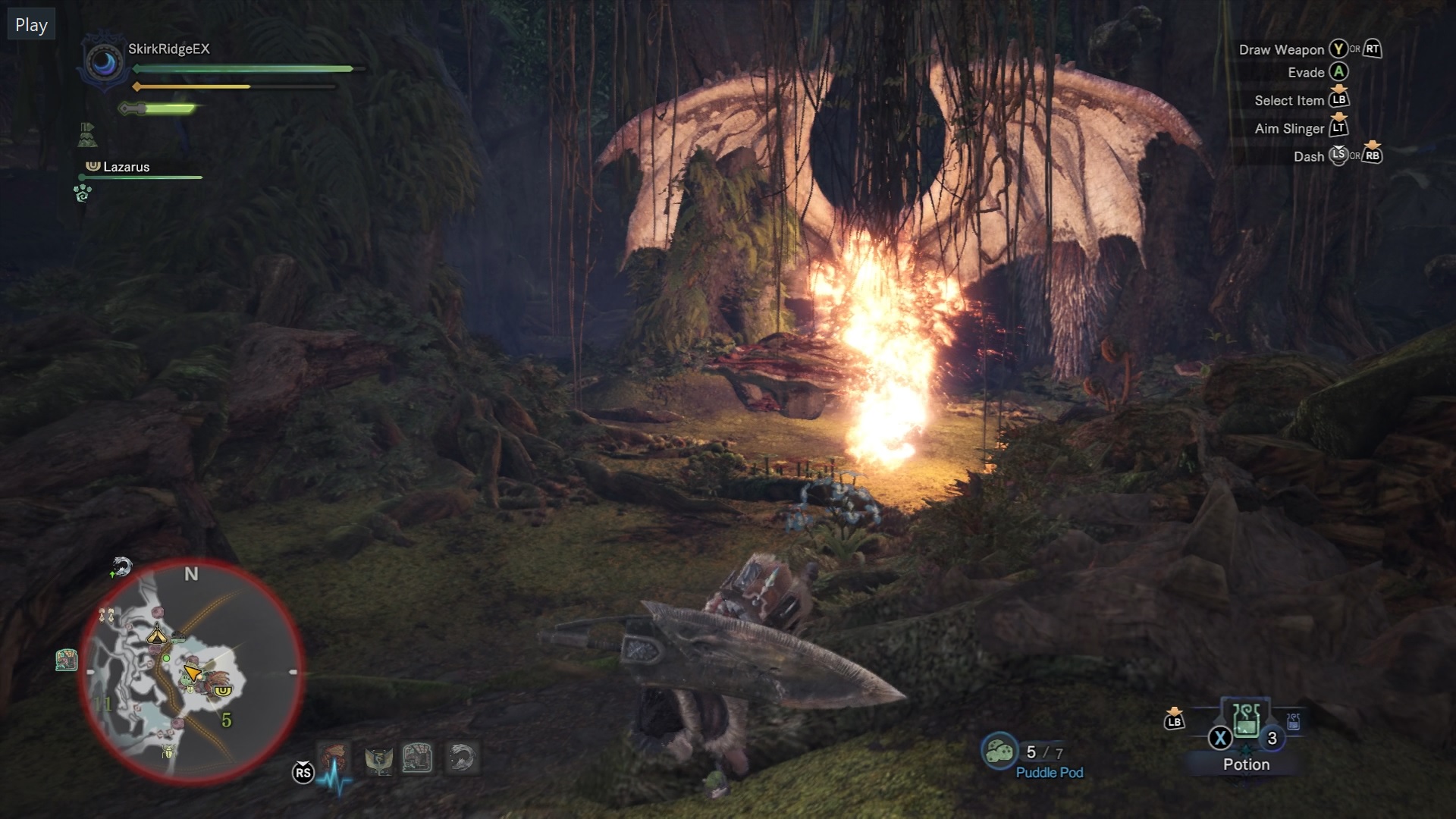 How to fight Rathalos

While the Rathian was a good example of a fight with a dragon, Rathalos is far deadlier. Not only can it cause a lot of damage with its bites, charges, and tail swipes, it can also deal some horrific damage in the air. When it's attacking normally, the general idea is to try and only attack when it's safe and not to get greedy with combination attacks too often. It can be knocked down occasionally which is where the bulk of your damage will come from.

If at any time it gets angry, it will attack with sheer ferocity, making it relatively difficult to land a hit in safely. It's also much more likely to attack with one of two fire attacks, one that shoots a fireball and another that spreads a semi-circle of lingering flames in front of it. Both cause Fireblight upon being hit by them, so roll around a few times to put out the flames. It's also a very good idea to avoid getting hit by its claws while it's up in the air as they can inflict poison.

Getting the timing down on dodging attacks can be tricky, particularly when it's in the air. Yet the vast majority of the time it's generally safer to keep locked on and close to the Rathalos, ensuring that you only attack just after an attack misses. If it does try any of its close range attacks, dodging to the side is good for the majority of them, while being near its legs helps avoid any tail swipes.

One thing to keep an eye out for is any wandering Anjanath. Rathalos hates this dinosaur a lot and the two will proceed to have a fierce battle until one of them flees. This will usually be the Anjanath as the Rathalos is the fiercest beast in the area at this stage of the game. Fire will feature quite a lot in this skirmish so be sure that you're not in the thick of it. With any luck, the Anjanath will somehow deal a massive hit or two on Rathalos before being forced to flea.

When Rathalos gets low on health, it does tend to fly straight upwards and towards its lair. Since you can't fly along with it, venturing to the southern part of the treetop canopies can be a long trip. Upon finally arriving though it should be asleep and thus very vulnerable for capture attempts, though you can also try to defeat it on its home turf. It doesn't gain any additional attacks in this phase, but is more likely to be aggressive.

What materials can I get from the Rathalos?