Before taking on Zorah Magdaros for the second time in Monster Hunter: World, you need to prove that you are capable of taking the Elder Dragon on. One of these is the huge hulking horned beast Diablos, who resides in the Wildspire Waste and is by far the most difficult fight you'll face so far thanks to its This guide will go over what how to kill it, what its weakness is, and why sound emitting gadgets can help.

As probably one of the harder fights in the main campaign, it can be reasonably difficult to adjust to the sheer size and speed. You should be fairly good at dodging by now, but there are ways to ensure that you're as well prepared as possible for this fight. While it is possible to do this fight solo, those looking for some assistance should go to our Monster Hunter World guide to find out how to bring in others to take on this ground-burrowing beast. 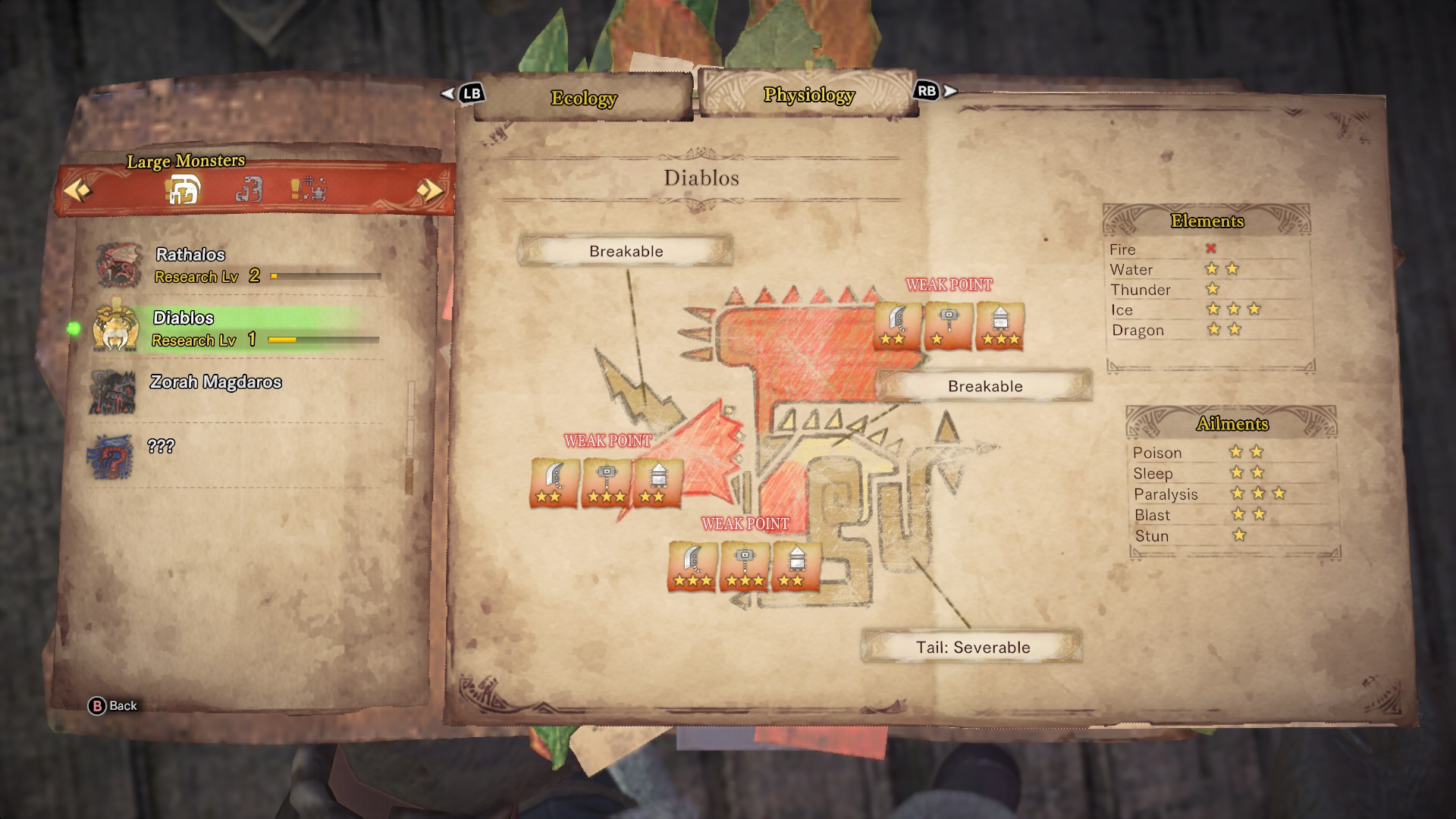 Those who have been grinding materials from Legiana, more on how to defeat that monster in our Monster Hunter: World Legiana guide, should be able to craft an ice based weapon. This is by far the best thing to bring along to this fight as it will deal the most damage. Water and dragon elements also relatively good in a pinch, but thunder and fire shouldn't really be considered for this hunt.

As Diablos has a pretty hard head, it's very difficult to stun it, however you can instead opt to paralyse it which is arguably the superior status ailment for it to have. Any time you can stop Diablos moving is good, so make sure to bring along lots of things to paralyse Diablos. The other status ailments also have a moderate affect on Diablos, so can be used in a pinch. There is one more, unique way to stop it, but that will be detailed in the next section.

Diablos is relatively unique in that the breakable parts of it are not sections where he is weak. His back can be broken, while his horns and tail can be cut/broken off of it, which does limit the brutality of some of its attacks, as well as give you some great materials.

Its weak points are the head, torso, and wings, all of which have different resistances to certain weapon types. Bladed weapons have moderate damage to its head and wings, but are best on its torso. Blunt weapons like hammers are very good against its head and torso, but terrible against its wings. Ranged weapons are great against its wings, but get a little worse when attacking its head or torso, but could be great for giving you more time to dodge its attacks. Either way, there's parts of Diablos that should be focused on when you're fighting it, no matter which weapon type you have equipped. 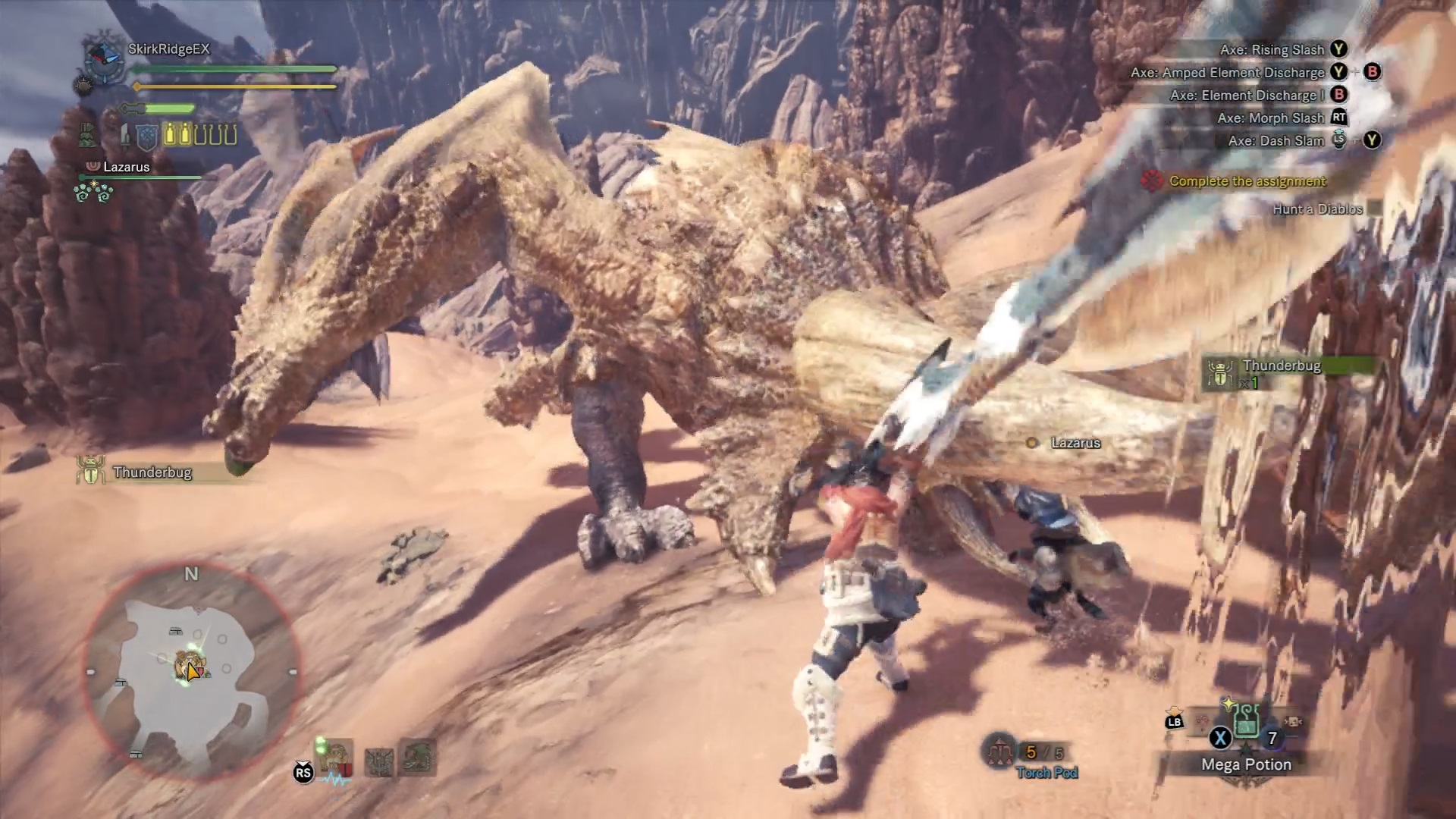 How to fight the Diablos

You might find that this takes a few goes to overcome if you're not used to the huge difficulty shift. It's imperative that you bring along some health boosting items such as Nutrients, or if you can make them the Max Potion or Ancient Potion. This will give you a bit of security should Diablos connect with any of its attacks. I mentioned in the previous section that there's another item to bring along that can disrupt Diablos and that is Screamer Pods. You can make these by collecting Screamer Sacs that are obtained by killing the flying creature Noios in the Wildspire Waste by using slinger shots to bring them down from the sky.

The Screamer Pods when fired at the ground as Diablos burrows towards you will interrupt its attack, bringing it up to the surface. This will leave it vulnerable to being hit a few times, but your attack of opportunity is very short if you're a melee fighter. If Diablos ever runs close to a base camp, this is a good opportunity to craft a few more by going into the tent and combining Screamer Sacs.

Diablos has several nasty attacks that all require precise dodging skills. If it burrows underground, it will hurtle towards you before rising violently. If you run away from it and dodge in the last possible moment, you should avoid the brunt of this attack. It can also whip its tail twice, as well as headbutt a couple of times with its horns, but by far its most used and most dangerous attack is its charge. You need to be ready for it to charge at all times, running off to the side to ensure it doesn't hit you.

With all those nasty attacks, it's perhaps a little reassuring to note that Diablos has a set pattern. It will either use the burrow or charge, before using either its tail whip or headbutts, almost without fail. In my experience, the only times where it may charge a second time is if the first charge connects with you and Diablos senses blood. Speaking of its charge, if you make it crash into one of the rock pillars, it will momentarily get stuck, allowing you to get a few free hits in.

Another thing about Diablos is that it can tire out relatively easily if you just run around. You'll know that it's tired when it just stands there doing nothing, allowing you to smack it with your weapon of choice. Diablos only takes a short breather though before getting back into the loop of attacking, so just be sure you don't get greedy with your attacks. The fight against Diablos does get easier as the duration of the fight progresses, especially if you sever its tail or break both of its horns.

In its lair it gets a new attack where it burrows into the ground next to the sand-fall. When it does this, run out of the room as it will emerge from the sand-fall and cover a massive distance when leaping through. This attack definitely hurts a lot, so ensure you're nowhere near it when it comes through.

What materials can I get from the Diablos?