If you click on a link and make a purchase we may receive a small commission. Read our editorial policy.
Mortal Shell review
A moody action RPG deeply inspired by Dark Souls that offers plenty of interesting ideas, but they struggle to outweigh its flaws.

Mortal Shell tries desperately hard to emulate its hero Dark Souls, while also attempting to carve out its own weird niche. Expect a big toad NPC to blurt out something like "Apocryphal intestines lie in the heart of darkness!" while you’re being smacked in the bum by a crazed villager wielding a lute. But scrape away all the spooky-big-words dressing and you’ve got a fairly strong Soulslike beneath the gubbins.

It’s got all the usual trimmings. This is an action RPG where you control a nameless being that looks a bit like the person from Crysis, but if you let them reduce in the pan for twenty minutes. You explore a dark fantasy world littered with enemies that’ll batter your health bar to a pulp in a couple of swings. Oh, you’ll find said health bar coupled with a green stamina bar, of course. Death often leads to losing everything. Checkpoints are few and far between so there’s always a lingering sense of anxiety as you progress, and that familiar wave of relief when you eventually stumble into a bonf- I mean, Sister Genessa, a sweetheart whose mask lights on fire when you wake her up. Classic Nessy. Chat with her to set your spawn point, respawn all the enemies (what else), and spend your winnings on upgrades and the like. 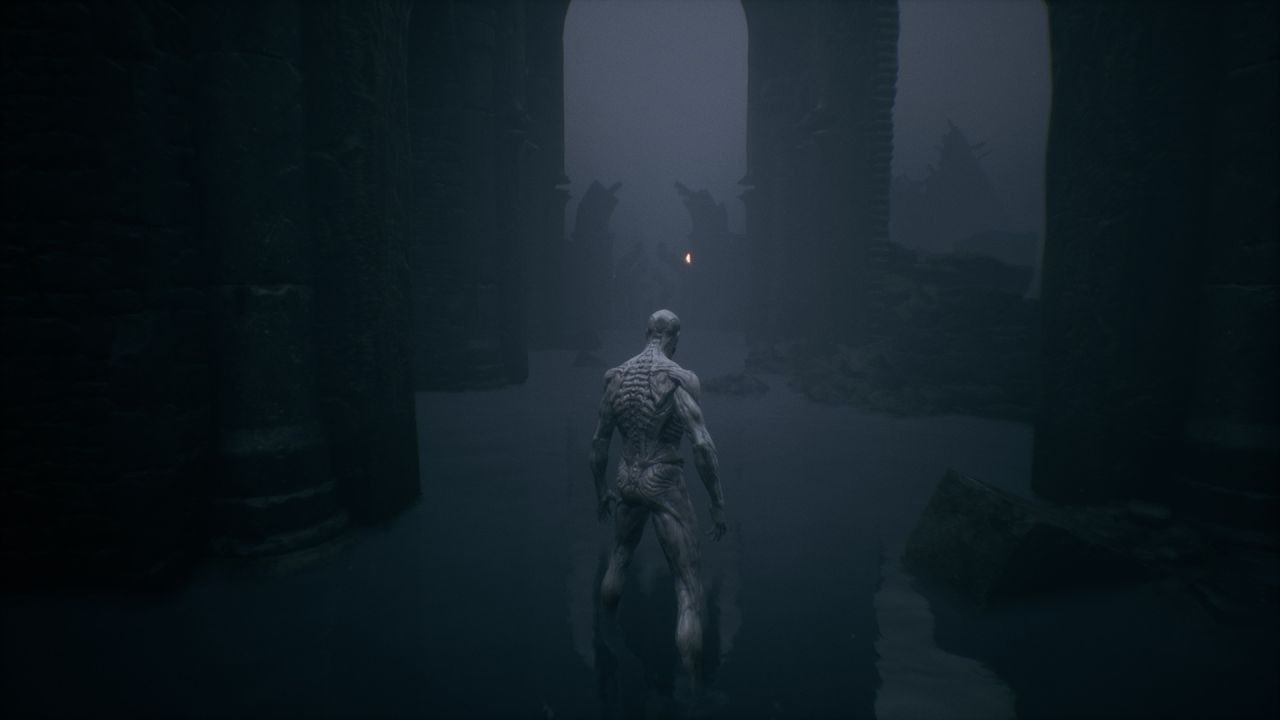 Where Mortal Shell really sets itself apart is in this upgrade system. Scattered throughout the world are four Shells which your pale, Gollum-y self can inhabit. These are suits of armour previously worn by another unfortunate soul, each with their own unique traits. Hop into them and they’ll give you a basic health boost or stamina bump, but to fully unlock their potential you’ll need to learn more about their original owner.

Hand Sister Genessa some Tar or Glimpses, the game’s bizarre main currencies, and you’ll gradually transform, for example, your glove into a power fist, while learning a bit more about whoever had the gear before you. Even if none of those stories really make sense to me, it presents a neat sense of discovery which lore nerds will relish piecing together.

Each Shell feels like it fits a certain playstyle, and you’ll soon adopt a favourite, but you’re somewhat bottlenecked by the archetypes. Sure, you can swap between them with special items, but there are only four in total, and once you’ve strapped yourself in there’s no loosening the buckles. No mixing and matching allowed. Tank take damage. Magic person finicky. Rogue roly-poly. 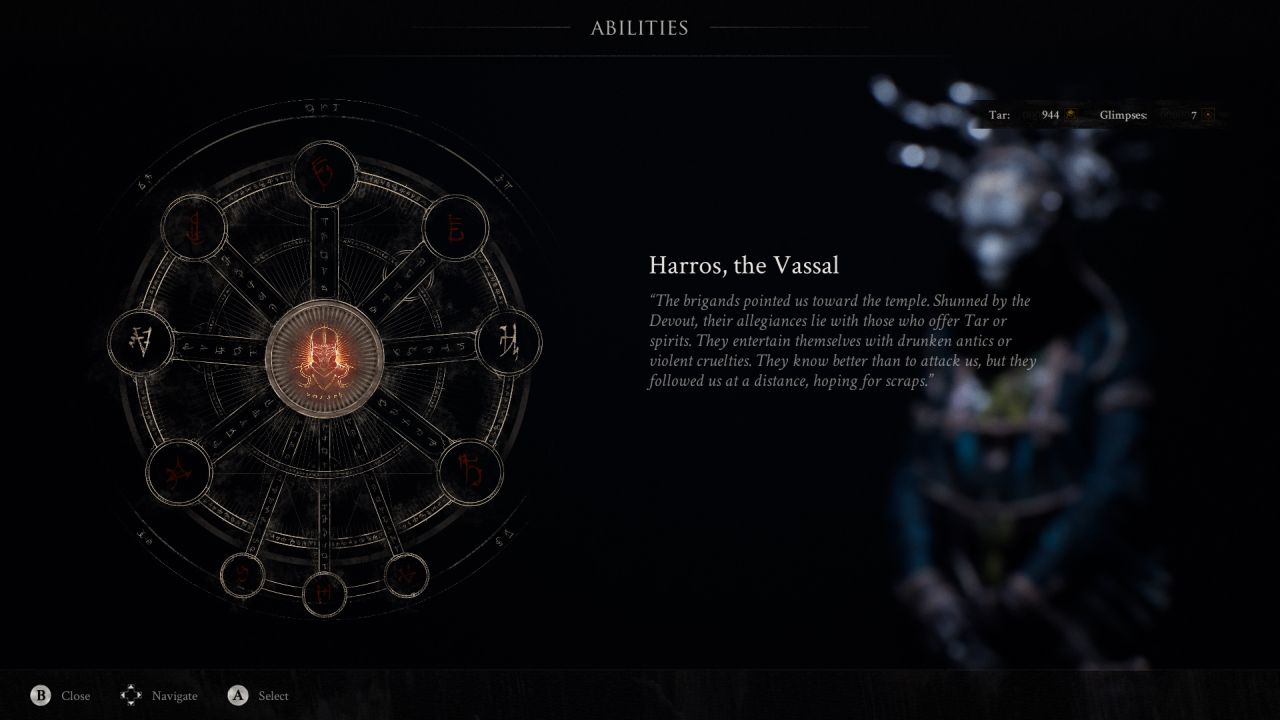 This extends to combat as a whole, which is a shame as it does a few things exceptionally well. There’s an immensely satisfying heft to your movements, in the way your character hoists their weapon in the air and sends it crashing with a thunk into flesh, and in the crackle and rattle of your armour as you narrowly backstep a whirling hammer blow. Successfully parry an enemy just before they connect and you’ll perform a devastating riposte that deals huge damage. Again, it has a wonderful crunch, a delicious punch you instinctively time your nod and awkward violence "Ooosh" noise to.

The most interesting highlight here, though, and one which is brilliantly executed, is the Hardening. At the press of a button your character will turn to stone, preventing any incoming damage and even staggering smaller enemies who collide with your rocky carapace. What’s genuinely astonishing is the way you can harden at any point during a swing, and as the effect melts away you’ll follow through so naturally, so darn smoothly. It’s kind of genius.

I am susceptible to cocking things up in the heat of battle, so this free invincibility button proved exceptionally useful. If I got too greedy and over-committed to an attack, I could harden in a pinch to prevent certain death. In an oppressively hostile world where you feel like you’re going to be snapped in half at any moment, hardening is an important trump card, a superpower which, if used wisely, can make you unbeatable. 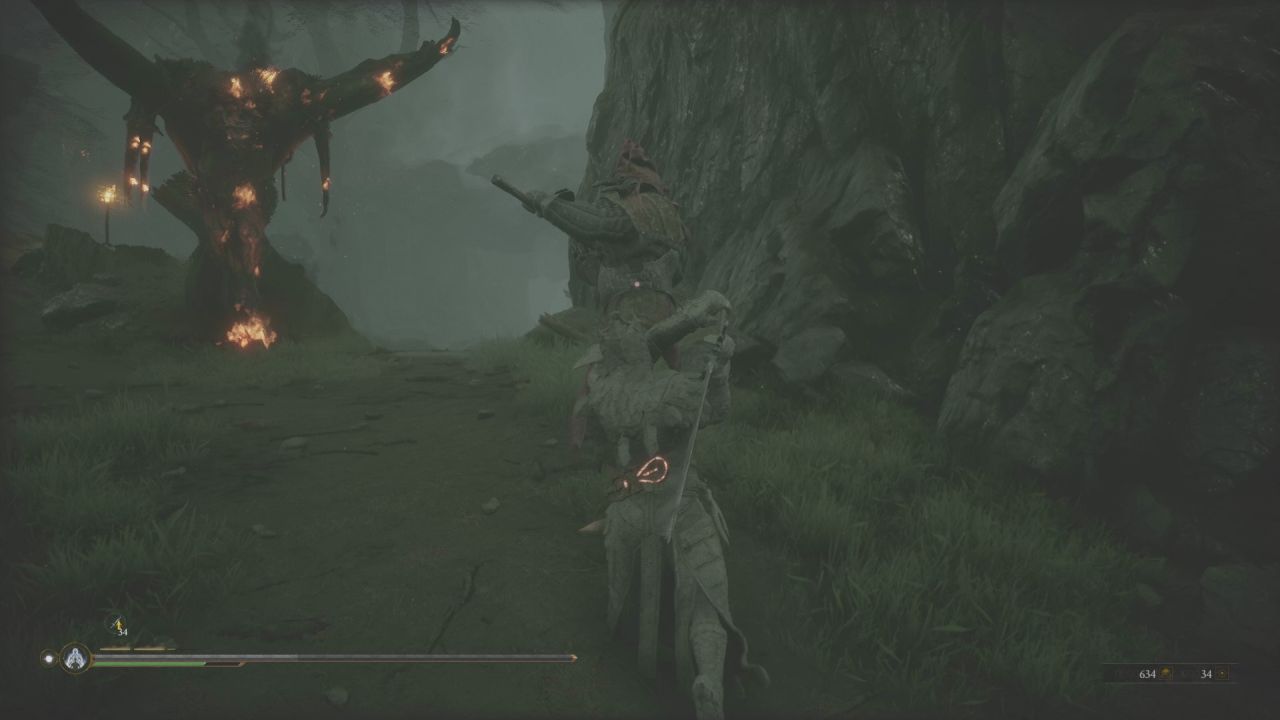 The thing is, I totally rinsed the ability once combat clicked for me, but boy was finding that point a struggle. That satisfying heft? Unless you’re rocking Tiel - the rogue’s Shell with lots of stamina, little health, and a quick shadowstep dash - dodging is akin to prying your leaden feet off superglue.

Weapon and attack variety doesn’t help the cause either. There’s a total of four weapons and each has its own set of unlockable abilities. Expect some to be better at clearing groups of enemies, while others focus on bashing single targets. They all feel fairly distinct, but there’s nothing totally bonkers, nothing which’ll induce a maniacal laugh.

My main gripe lies in the way you’re only able to equip one at a time, with no switching on the fly. I want to express myself through combat. Feel that rush of using a honking great sword, before whipping out some daggers to change up the pace. I was desperate to mess about with builds, but it simply isn’t possible.

I’m left with a similarly mixed feeling about enemies and bosses. They all look the part and are animated beautifully, with sinewy bodies, towering giants, and snarling beasts inciting actual fear. One area houses bulbous demons bathing in cauldrons of lava, who sling steaming hot molten balls at you. Bosses are also clench-inducing and well thought out, and you'll find yourself dodging attacks from a giant rhino with a cheese grater on its head or a frosty warrior who dashes all over the place. They present just the right amount of challenge and have some surprisingly clever tricks up their sleeves, or spears, or claws. 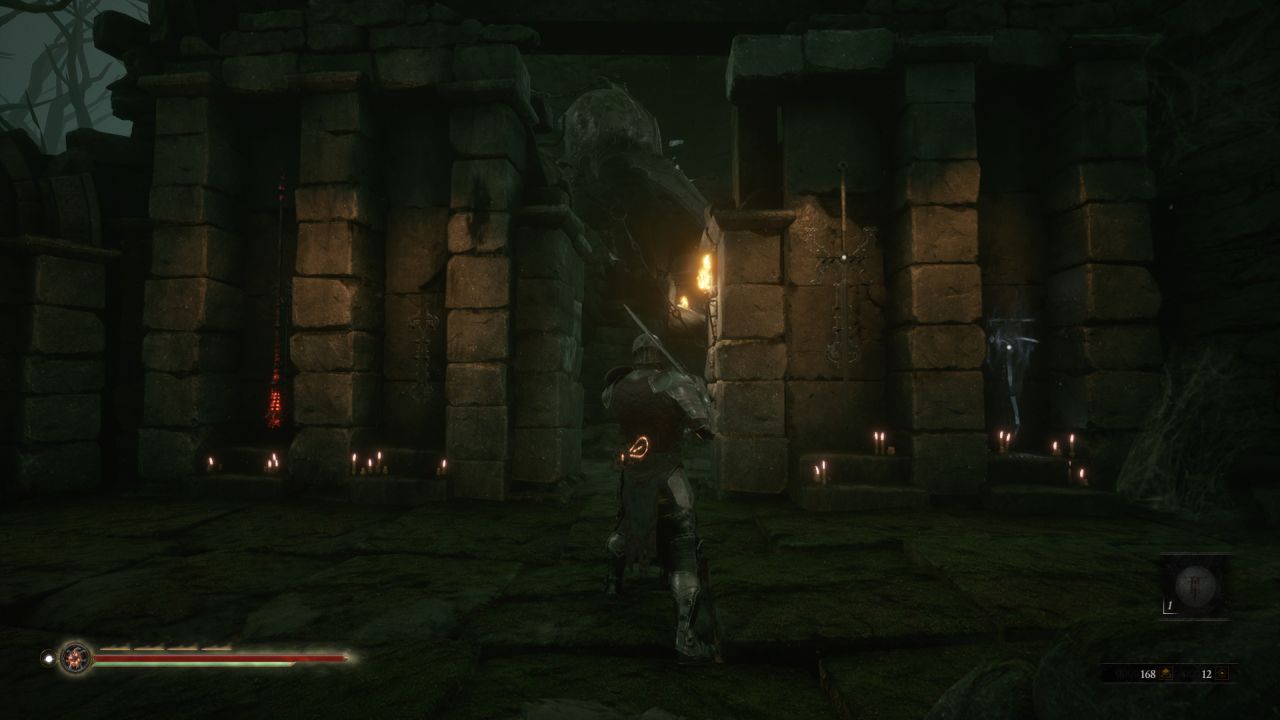 Better get used to the enemies, though, as they get old fast. When combat is such a key part of exploration, bumping into more of the same fiends every few steps grates very, very quickly. Mortal Shell has this habit of sprinkling a big enemy amongst many small enemies, as if pointing and chirping: "Look! Variety!" No mate, please, stop. In the end, I just ran past most mobs if I knew where I was going.

This wasn't all the time, though. Finding your way around is - hoo boy, let me tell you - it’s a tough one, folks. Truthfully, I bumbled through the entire game. I clawed my way through the fog, quite literally, as the main hub area is a dense woodland encased in this all-pervading mist. It’s from here you’ll venture off to three areas, gather their Glands (Mortal Shell’s grotesque answer to Super Mario’s flag poles), and return them to someone of importance. This is the ultimate goal, made so much harder by an immensely confusing world.

Visually each area is striking, and at times, stunning. You’ll travel to caverns entombed in ice, encounter armoured sentinels emblazoned with fire, and step out into a vast other world where jagged monuments loom in the distance. Where they lack is clarity and depth. The first area, Fallgrim Outskirts, is the hub you’ll branch off from in your hunt for those pesky Glands. Yet, having completed the game, I still cannot navigate it in the slightest. I cannot picture where anything is, or how to get there. 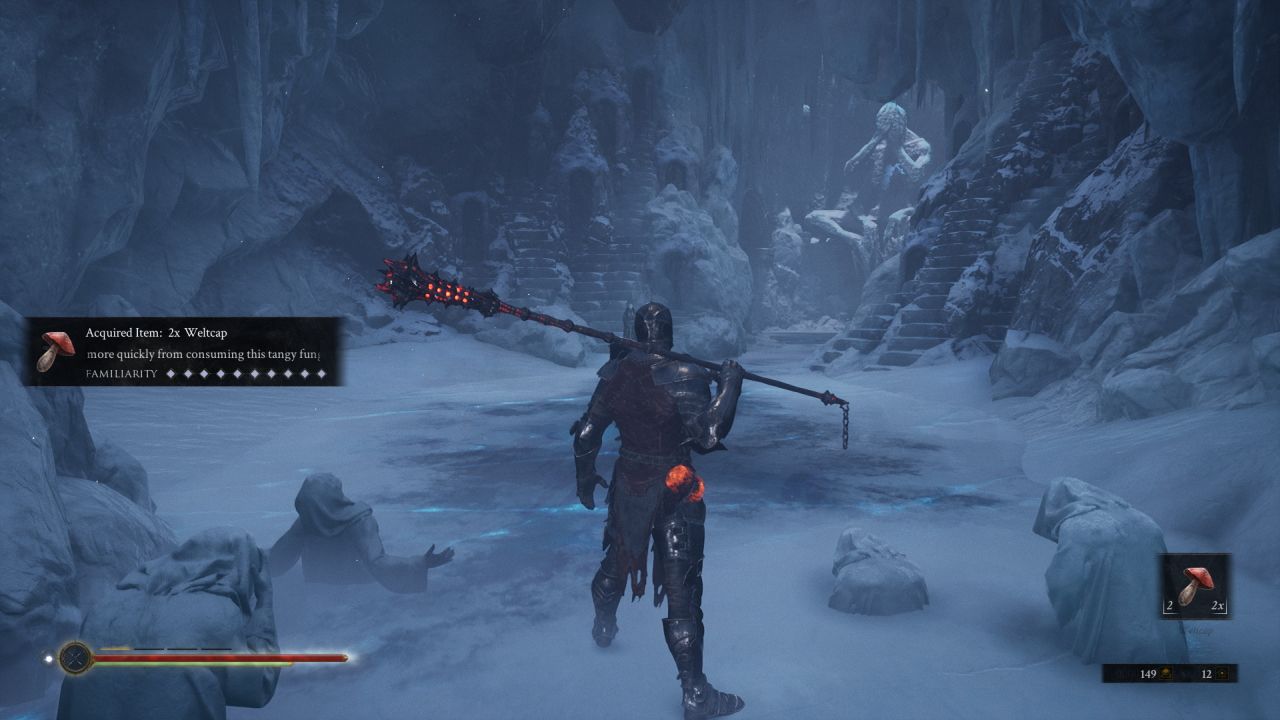 The other zones are much simpler, which is both a blessing and a curse. All but one is a linear descent to a Gland, with a few crawl spaces and small nooks to rummage about in. This makes it a more focused, intimate experience where you’re twisting and turning up moss covered stairwells or listening out for the ring of a flail as it drags on stone.

But despite this, I found no real impetus to explore as I quickly realised there’s only one way in and one way out. Unlike Miyazaki’s magical, interlocking maps which tumble and fold into each other, constantly challenging you to unearth new shortcuts and delighting in your surprise, Mortal Shell feels like it kicks you down a slide and sloshes piss in after you. I’ll never forget grabbing my first Gland and utter elation giving way to a sinking feeling, the realisation I’d need to backtrack through an entire area I’d worked so hard to beat. Some enemies change, some minor environmental hazards are chucked in. It’s still aggressively unfun.

Ultimately, Mortal Shell will make you want to headbutt your monitor out of sheer frustration. The puzzling nature of the map, the repetitive placement of enemies, the lack of options all coalesce into a big arm that holds the game back from being really good, to just good. No matter times I try and swat it away with thoughts of the meaty combat, that arm simply won’t budge.