To get your own settlements in Mount And Blade 2 Bannerlord, the most direct way will be to lay siege to a town or castle. Doing so is extremely risky without having ample supplies and a high enough skill point rating in engineering, and that's not counting other armies interfering in your plans.

In this Mount And Blade 2 Bannerlord siege guide, we will teach you how to lay siege to an enemy stronghold, as well as explain what each of the siege weapons do and when to assault. 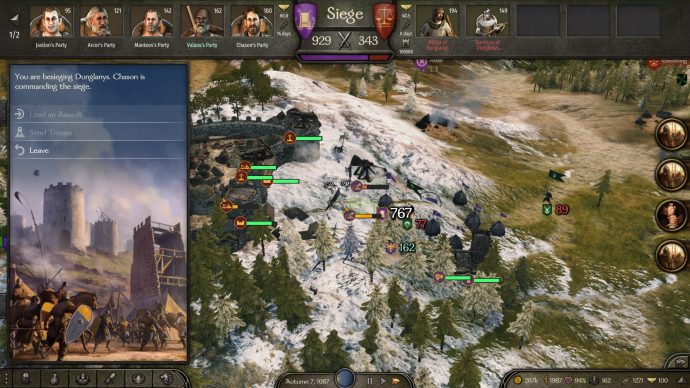 How to siege a town or castle in Bannerlord

When you approach a settlement owned by an enemy faction that you are at war with, you will get the option to lay siege to that town. You'll then begin the long process to constructing your siege camp, which must be done before developing any siege weapons. This gives the defending forces a chance to build up their defences. The speed at which you construct your siege camp and any siege weapons is based on your Engineering skill point total.

It's worth noting that the enemy factions can do the same to towns and castles you own as well. If you are the defending player, this means you can construct plenty of siege weapons to counter their efforts to take over your settlement. Here is the full list of siege weapons you can develop during the siege.

My biggest tips are to have a ton of food supplies on you before starting a siege and to save before the start of any siege. You're going to be here for a while and when food supplies run out, that could be disastrous.

It's also good to be mindful of efforts to disband your siege from other armies. At any time before the settlement falls, enemy lords and nobles may start to gather up to try and attack your camp. Try to judge whether you have the support to continue the siege or not. If their numbers are overwhelming, you could be in trouble and need to disband early to save your army. Saving the game helps mitigate the risk. If the town's defences are huge, the militia may decide to come outside and attack you instead, but more often than not, they'll stay inside and focus on building their defences. As a defender though, if your army is nearby while a settlement you own is under siege, you can attempt to hit the enemy camp to break the siege.

When you have constructed some siege weapons, keep an eye on both what siege defences they have and how many troops are garrisoned in the siege tower. If you've stocked up on enough rations to last your troops longer than their food supplies, their defences should dwindle down enough for one last push.

Eventually, their defences will drop to a low enough level that you may wish to consider storming in and taking over the place. This is just like setting up a regular battle, only you have the option to place your squads where you want at the beginning of the assault. You'll also be able to swap around your siege weapons by clicking on the icons and selecting the option to swap siege weapons you have made as you see fit. This may be a bug, but currently you will have to unassign a siege weapon first before you can swap them if there is no available slot.

I highly recommend before leading an assault that you construct a ram or siege tower, some ballistas, and as many barricades as you can as a bare minimum. You'll want the ability to protect your troops during the march to the gate, as well as the capability to climb over the wall or bash the main gate. Without these, you're not getting in easily and it could make your entire siege fail.

Once you've broken in though, the rest is like any regular battle: rout the enemy or slay them all. Should you win this battle, the town will fall to your control temporarily. If you're part of a kingdom, you'll need to elect a leader using influence in the kingdom tab on the world map.

Thank you for reading our Mount And Blade 2 Bannerlord siege guide. You should now be well equipped to take over the world. There are plenty more guides in the works, but for now you can check out our other guides for the game, including details for character creation, as well as the bugs that are unfortunately in the game. Here are some guides to get you started: