After two years in beta, Nvidia's cloud-based streaming service GeForce Now has finally got a proper release. In fact, you can go and sign up right now if you like, as those months-long waiting lists have finally gone for good. Can it rival Google Stadia? Quite possibly. Here's everything you need to know.

I've yet to have a go on the public version of GeForce Now, but I was impressed when I tried it out all the way back in January 2018, and the fact you don't have to buy individual games to play on the service like you do with Google Stadia remains one of its strongest points. Games still have to be approved and added to the service by Nvidia, but as long as you own the game in question already, there's no extra charge to play it on GeForce Now.

Well, sort of. There will be two subscription plans available for GeForce Now - a free one that lets you play for an hour at a time, and a paid plan that lets you play for longer (up to six hours per session), with ray tracing and priority access to the servers. For now, that paid plan will cost you £4.99 / $4.99 per month for the first year, but there's currently no telling how much this "Founders" plan will increase by once its limited time offer is no longer available. 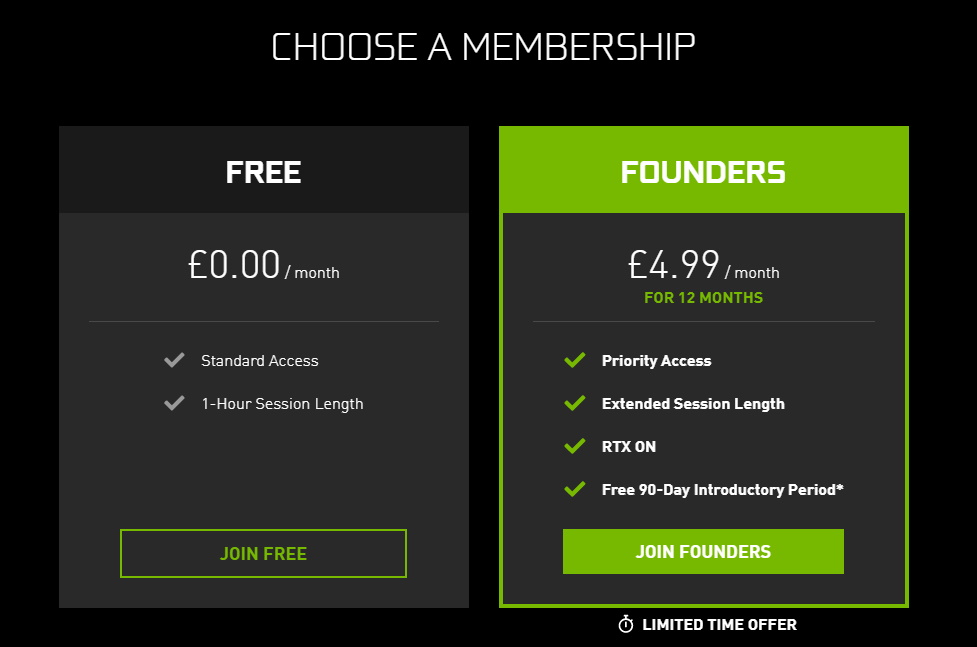 Still, as a potential rival to Google Stadia, it's certainly an enticing one - provided the games you own are supported by the service, of course. At time of writing, Nvidia claim that over 30 of the biggest free to play games are supported by the service, including Fortnite and Warframe, but helpfully they haven't included a complete list anywhere on their website to make things nice and easy. Instead, their GeForce Now games page just consists of a search bar, forcing you to manually type in each game name you'd like to check.

Indeed, some of the best PC games from the last year are still missing, including Devil May Cry 5, Control (which is ironic, given it's the one good RTX game you can currently play right now), Red Dead Redemption 2, Resident Evil 2, Monster Hunter: World and Phoenix Point to name just a few. There's still room for improvement, then, but as long as there are enough games that are supported by the service that you do own, then it certainly beats having to pay full price for them on a separate service that might not even exist in five years time.

GeForce Now also involves a lot less setup than Google Stadia, as all you need to do is download the GeForce Now app to your Windows PC, Mac, smartphone or TV (the latter via Nvidia's Shield device), link your various game library accounts and off you go. Google Stadia, on the other hand, still requires you to connect a Chromecast Ultra device to your PC before you can start streaming, and its mobile app is only supported on a handful of Google Pixel phones.

Of course, a large part of GeForce Now's success will depend on the quality of its streaming service. I was impressed with its speed and relatively low latency when it was in beta, but how GeForce Now will cope now that everyone can pile onboard remains to be seen. I'll be giving it a thorough test over the coming days, so check back soon for a proper verdict.